The Premier League title race is over. It has been for some time, in fact. Pep Guardiola's swashbuckling Manchester City team have swept aside all before them and ensured the 2017/18 campaign will be remembered as a procession, rather than a race, for the top prize.

However, if you exclude the mini-league of one, there are two far more intriguing battles going on. At the summit the rest of the Premier League's elite are jostling to make the top four.

Five into four does not go – even if Diane Abbott is doing the maths – so two from Liverpool, Manchester United, Arsenal, Chelsea and Tottenham Hotspur will miss out.

Meanwhile, at the foot of the table, the relegation battle is hotting up. West Bromwich Albion have not felt the full force of the Alan Pardew bounce while Stoke City and Swansea City have both changed manager with varying degrees of success.

Southampton, Crystal Palace, Newcastle United and Huddersfield Town look set to stick rather than twist but are all in the mire. In fact, anyone up to Watford, in tenth, could drop.

So Football Whispers' writers put their reputations on the line and predicted the top four and bottom three with ten Premier League fixtures remaining. No points for guessing Manchester City, chaps.

Manchester City will be champions while Liverpool's attacking verve will ensure they win the majority of their remaining fixtures, especially as they only have to play two of the current top six.

Then it's a straight battle between United, Chelsea and Tottenham Hotspur. I've gone for United because they have, after spending around £200million, enough talented individuals to win matches alone, but my reasoning for Chelsea ahead of Spurs is a little more complicated.

I feel Tottenham are, this season, the better team and they have a strong chance of getting through to the Champions League quarter-finals. Antonio Conte's side's task is far more tricky and I wouldn't be surprised if they are unable to beat Barcelona in their last 16 second leg. That could be telling in the top four battle.

Conte proved last season that, when given a free week to prepare, his side can beat anyone. Without Champions League football that's what the Italian would have and it could make the difference come May.

Keep Pardew in charge and the Baggies are going down, although even without him it'll be a struggle. Stoke, too, have been uninspiring for much of the campaign and don't have a reliable striker who can fire them out of danger – a run-in that includes games against Manchester City, Tottenham, Arsenal and Liverpool is hardly ideal either.

Picking the third side is almost impossible but, after much consideration, I'm plumping for Huddersfield Town.

The Terriers' final four games of the season are against Chelsea, Everton, Manchester City and Arsenal. If they don't have enough points by mid-April, it'll be hard for David Wagner's side to save themselves. Hopefully I'm wrong on this one.

Manchester City are the champions – probably the only certainty in the top half of the table. As long as United have David de Gea, they will concede fewer goals than the other sides and should nail a place in the top three.

Liverpool’s attack, especially with the electric Mo Salah, will have enough to fire them into at least third, but probably second. That leaves a battle between Chelsea and Spurs for fourth.

Tottenham might not be enjoying as good a season as last year, but Mauricio Pochettino has Harry Kane. Goals equal prizes and the England striker will be the difference between fourth and fifth.

At the bottom, Pardew can already begin scouting the Championship; the Baggies are going down. Stoke haven’t enjoyed an upsurge in form under Lambert, and relying on long-range efforts from Xherdan Shaqiri will not be enough to keep them up.

Crystal Palace, if they can squeeze some more goals out of the misfiring Christian Beneteke, should be OK. Swansea have been much improved under Carlos Carvalhal, but they still don’t score enough to climb away from danger. Jordan Ayew should never be the saviour of any team; that would be my worry if I were a Swans fan.

Arsenal look out of the race so it’s five into four. Chelsea have fallen apart in a few matches this season against mid-table teams and then they’ve failed to turn up in the bigger games. It’s why, in my opinion, they’re going to be the team to ultimately miss out on a top-four finish.

United, despite failing to impress for large periods throughout the season, have José Mourinho at the helm and he knows how to get the job done more often than not. That’s why I’m giving them the edge over Chelsea.

The Baggies look down and out and Stoke City didn’t have the new manager bounce many had expected to see. Lambert’s men don’t seem to have the firepower to climb up the table and it’s why I can’t see them escaping the drop.

I also feel Newcastle will struggle to get clear. Yes, Rafa Benítez can set up a defence but they’re struggling to score goals and that will ultimately be their downfall.

Manchester City will cruise to the title and likely set new Premier League record for total points and goals scored along the way. Behind them, Manchester United’s underlying statistics have been less than flattering all season and I expect Mourinho’s men to slide back slightly, although their recent win over Chelsea was a boost to their hopes of finishing above the Blues.

Liverpool and Tottenham Hotspur have momentum and look worthy contenders for the distinction of being able to call themselves the Premier League’s second-best team.

West Brom's situation is desperate. Seven points from safety and trending in the wrong direction, Pardew’s men could soon find themselves cut adrift. Above the Baggies, it’s all about who can build momentum.

Stoke City might struggle, but Swansea City have regained some life under Carvalhal and Crystal Palace have the makings of a top-half team if only they could finish their chances.

Huddersfield's lack of creativity – they rank third-bottom for expected goals this season – is a concern and it could end up costing them.

The current top four won't change, so I'm going Manchester City, Manchester United, Liverpool and Tottenham Hotspur.  Chelsea are on a downward spiral and with Conte surely on his way out, it feels like yet another collapse at Stamford Bridge. I can’t see the Blues re-discovering the form to break back into the top four.

It’s pointless even talking about Arsenal as they’re in a bigger mess than Chelsea. City will win the league in the next few weeks, while Liverpool and Spurs’ attacking prowess may see them overtake United.

West Brom’s dismal form won’t improve enough to keep them up. They’re down whether or not they sack Pardew. It’s tight at the bottom but they’re too far adrift. Stoke City’s defence has been a mess all season and very rarely do the team who concede the most goals stay up. It’s the end of the Potters’ Premier League stay.

And I think Huddersfield Town will fall just short. Wagner is a very good manager but they lack crucial Premier League experience which has been evident throughout the season.

The neutral's favourite once more, Liverpool's exciting brand of football won't earn them the Premier League title but it should ensure they finish closer to City than anyone else – especially while Roberto Firmino, Sadio Mané and jewell-in-the-crown Salah thrive.

Manchester United will have enough about them to bore their way into third place, clinching the final automatic Champions League group stage berth, and José will trumpet that as an achievement despite the £200million outlay. Little horses? More like foetuses.

Spurs should have enough to see off Chelsea's challenge for fourth in the next few weeks but are more likely to slip up than United who will sacrifice everything for pragmatism.

West Brom's demise will be little surprise to anyone, least of all Pardew who reeled off their awful record last week while neglecting to mention his own pitiful points return in his last two jobs.

Stoke briefly threatened a revival under Lambert but all those who crowed at the Scot's appointment should have further cause to do so as the Potters face Manchester City, Tottenham, Arsenal and Liverpool before the season is out.

Southampton have to go sooner or later – you can't sell your best players to Liverpool routinely and progress – and seem wedded to giving the uninspiring Mauricio Pellegrino the season. That is a mistake which will cost them their place in the top flight.

Unsurprisingly, there is little disagreement among Football Whispers' writers as to who will make up the top four with only Adam Newson giving the Blues the nod over Tottenham to bag a Champions League spot. 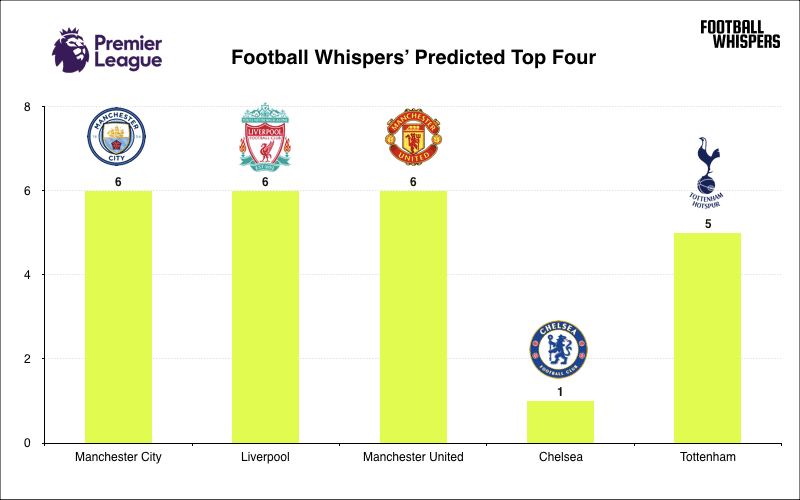 At the bottom things are far more interesting. Our sextet agree West Brom and Stoke City are doomed for the Championship, but the identity of the third team heading into the second tier is a bone of contention. 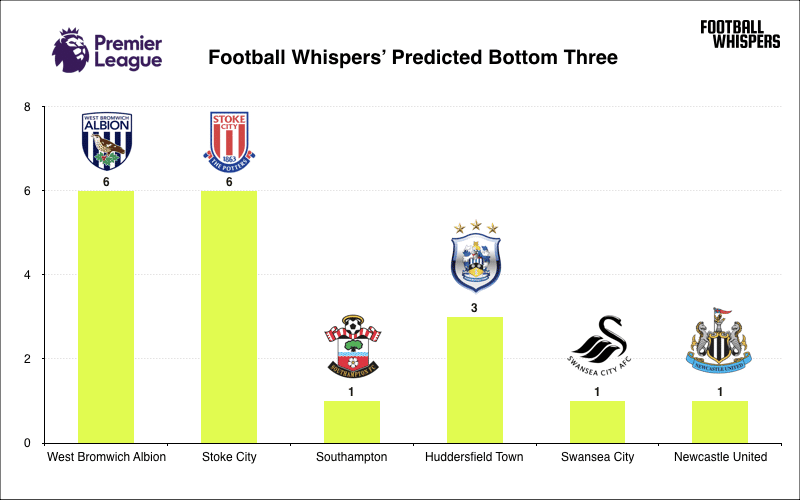 Who do you think will make up the top four and bottom three? Let us know where we've gone wrong by tweeting us or sending us a message on Facebook.