Watford fans had not had the chance to see what the fuss was all about with Adalberto Peñaranda before this summer's Under-20 World Cup. And they will have to wait a little longer to see him in the flesh after a work permit application was turned down.

However, in the final Peñaranda blew Venezuela's big chance when he saw his penalty saved by Newcastle United keeper Freddie Woodman. But by the time the South Americans had lost to England, Watford fans knew exactly why Peñaranda is so highly rated at Vicarage Road.

Peñaranda has won 11 full caps for Venezuela since joining Watford in January 2016. However, owing to his failure to be awarded a work permit he has been out on loan ever since, spending time with Granada, Udinese and Málaga. 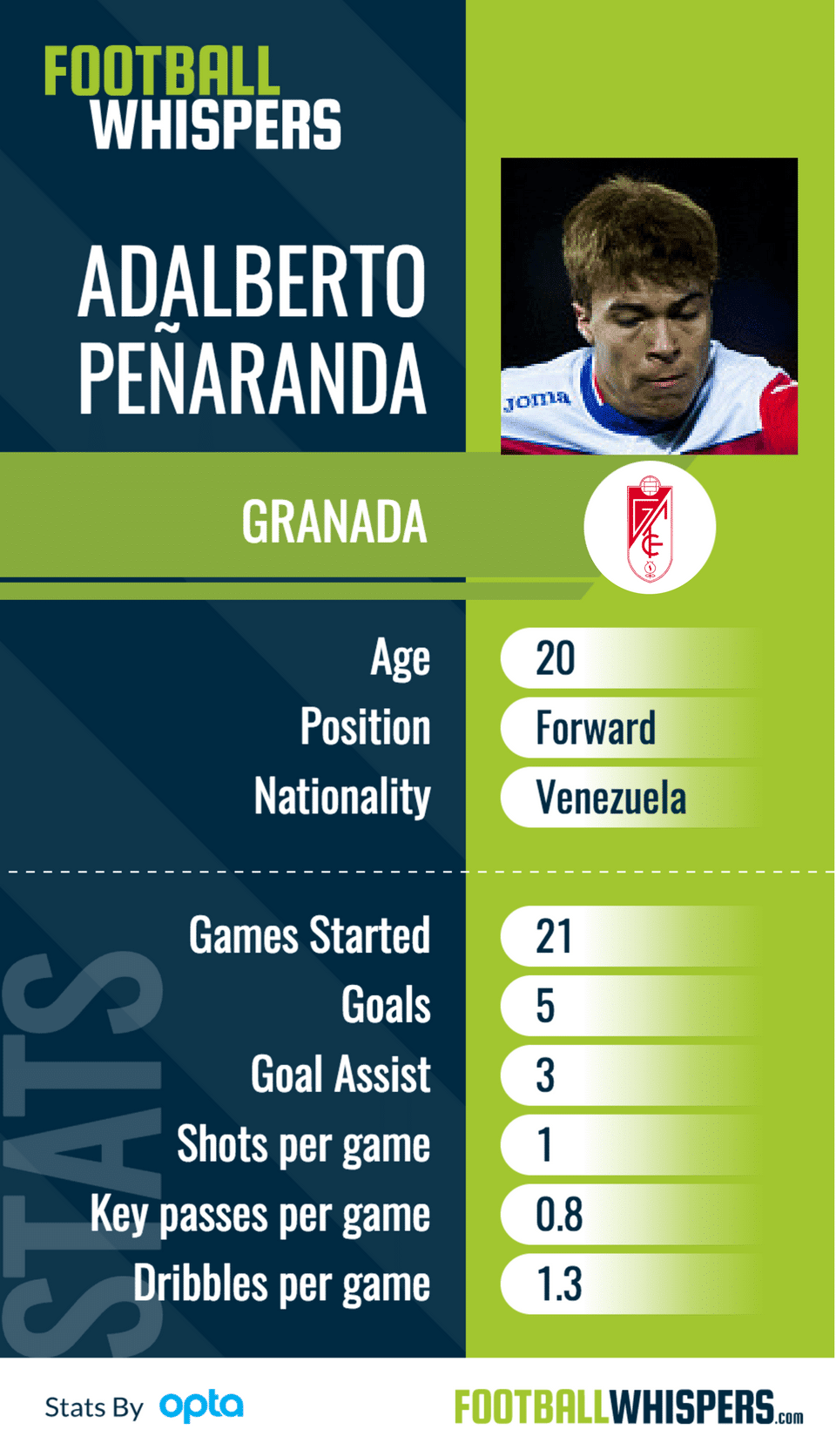 Who is Adalberto Peñaranda?

Watford's owners, the Pozzo family, have long had a reputation of discovering the best talent in South America.

It was the Italian family, also owners of Udinese and previously of Granada, who unearthed Bayern Munich transfer target Alexis Sánchez before selling him to Barcelona for an initial €26million.

Peñaranda has been likened to Sánchez, with his slaloming dribbling style similar to the Arsenal forward.

When asked about the similarities in their style of play, he said: “Alexis Sánchez is a superb player. We’re similar in many ways but I have to focus on doing my best and being a success.”

So it should come as little surprise that the El Vigia-born forward was quickly on the Pozzo's radar after scoring once in his first 15 appearances for Deportivo La Guaira. Peñaranda followed that up with three strikes in 17 starts with Equipo de la Costa the following season.

In June 2015 the Pozzos made their move, bringing Peñaranda to Udinese and immediately loaning him to La Liga side Granada. He did not make his debut for El Grana until November.

But he soon demonstrated his ability by scoring twice in a 2-1 defeat of Levante, becoming the youngest non-Spanish scorer in La Liga history – eclipsing Lionel Messi's own record for Barcelona.

By January 2016 the Pozzo family had seen enough. Peñaranda was transferred to Watford for £7million but remained with Granada for the rest of the campaign, scoring five times in 21 La Liga starts.

Ahead of last season Peñaranda was expected to link up with Walter Mazzarri's side for their second season in the Premier League. However, the Hornets' request for a work permit was denied and the forward was instead loaned back to Udinese.

But, partially owing to managerial turmoil in Udine, Peñaranda made just one start in the first half of the Serie A season and, in January, the loan deal was cut short to enable a move to Málaga until the end of the campaign.

Again, Peñaranda found himself on the periphery at La Roseleda and made just one league start and clocked up 171 minutes.

What next for Peñaranda?

When the Hornets signed the Venezuelan forward they were confident they had stolen a march on the rest of Europe to sign one of South America's hottest talents.

“So we brought him in early, relatively cheap. There were lots of football clubs looking around him, looking to purchase him. He’s an amazing talent. We are very, very excited.”

While he has not yet developed into a player who would command that sort of fee, time is on Peñaranda's side. Despite impressing at the Under-20 World Cup in South Korea Watford have seen a second work permit application thrown out.

According to the Daily Mail, the Hornets enlisted the help of England Under-20 coach Paul Simpson – who gave a glowing reference – but to no avail. Peñaranda's next move will, therefore, be another loan switch.

Watford have waited nearly a year and a half for Peñaranda, another season won't be the end of the world.