The Ajax captain's future has dominated the transfer window so far with Manchester United, Barcelona, Paris Saint-Germain, Liverpool and Juventus all reportedly interested in signing the 19-year-old.

With eye-watering transfer fees and ever-increasing salaries being offered to the Dutchman, this transfer saga could drag out a little longer.

But beyond the money, this scramble for one of Europe's brightest talents highlights just how valuable centre-backs are in the modern game.

It also suggests Europe's elite are ready to spend big on high-potential central defenders – as opposed to the tried and trusted – despite the risk of inexperience proving costly.

De Ligt, for all of his qualities, still has a lot to learn and will continue to have lapses in judgement – something which was evident against England in the Nations League semi-final.

As Jamie Carragher highlighted on Sky Sports, the error wasn't allowing the ball to squirm free of his touch but to dive in and scythe Marcus Rashford down in the penalty area.

A more experienced player doesn't allow one bad touch to cause a panic. But that part of de Ligt's game will improve with age.

So with teams now prepared to build their defence around a young centre-back, we've decided to put together a list of four players who could emulate the Dutch star. The next defender elite clubs across Europe will be prepared to break records in order to sign. 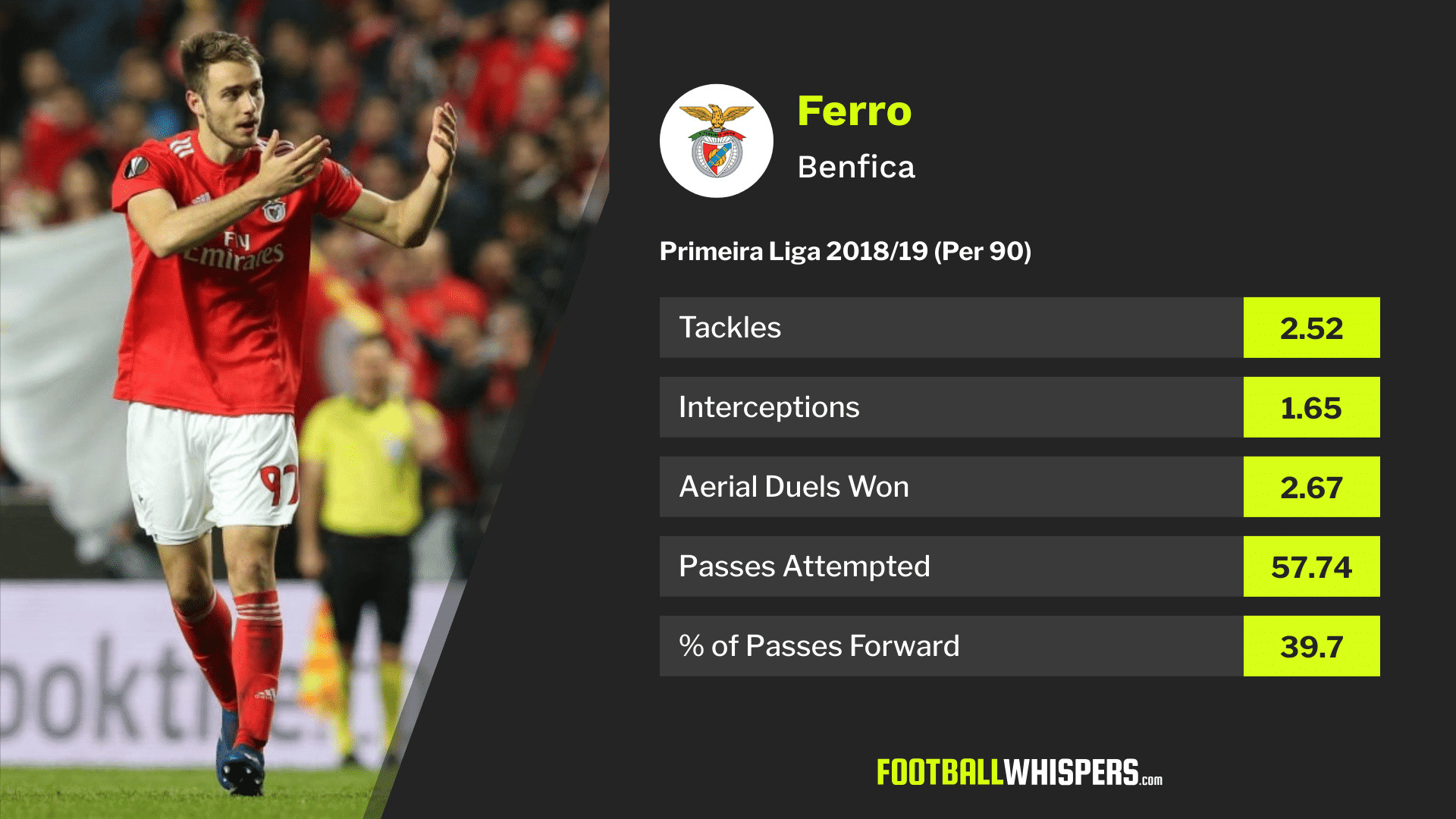 We start with Ferro. Benfica are renowned for their development of young players. João Félix is in the spotlight right now. Gedson Fernandes garnered plenty of admiring glances last season while centre-back Rúben Dias continues to be linked with moves to Real Madrid, Manchester United and Juventus.

But it's Dias' partner who could be the defender many of Europe's best end up battling it out to sign. At 22 years old Ferro can't be described as a wonderkid. But as a centre-back, he's still in his formative years.

It's difficult to judge defenders on their stats. If the team they're in happen to be busy in the defensive third then their numbers will swell. It makes them appear better when in reality they're just busier.

Similarly, if a team defends from the front and has very little to do in the defensive third, then their stats appear underwhelming. The reality is, of course, they just aren't having to do much. It has nothing to do with quality.

I can watch this all day. #Ferro #Benfica pic.twitter.com/RZt0ilNX5S

What makes Ferro standout from the rest, however, is how exceptional he is on the ball. Modern-day defenders have to be comfortable in possession and they need to have the ability be able to play out from the back.

Ferro does that and so much more. The Benfica No.97 is like a quarterback, pinging passes all over the pitch. He's a defender but also a deep-lying playmaker, a huge advantage for any side he's in.

The Benfica man is rarely flustered. He can play through the lines as well as clipping balls over the top. He's got it all and if a side that dominates possession needs a centre-back, then he's the man to sign.

In the past, press-resistant players appeared almost exclusively in centre-midfield. But with teams now adopting higher pressing positions and taking more risks, even goalkeepers need to be able to calmly beat a man when in possession.

However, just because these players have to beat a press doesn't mean they're comfortable doing so. For some is unnatural, an awkward demand placed upon them by a demanding coach.

For Saliba, though, it's as normal as breathing.

The 18-year-old has already been linked with Manchester United and Arsenal. Other Premier League teams are supposedly interested and it's easy to see why. 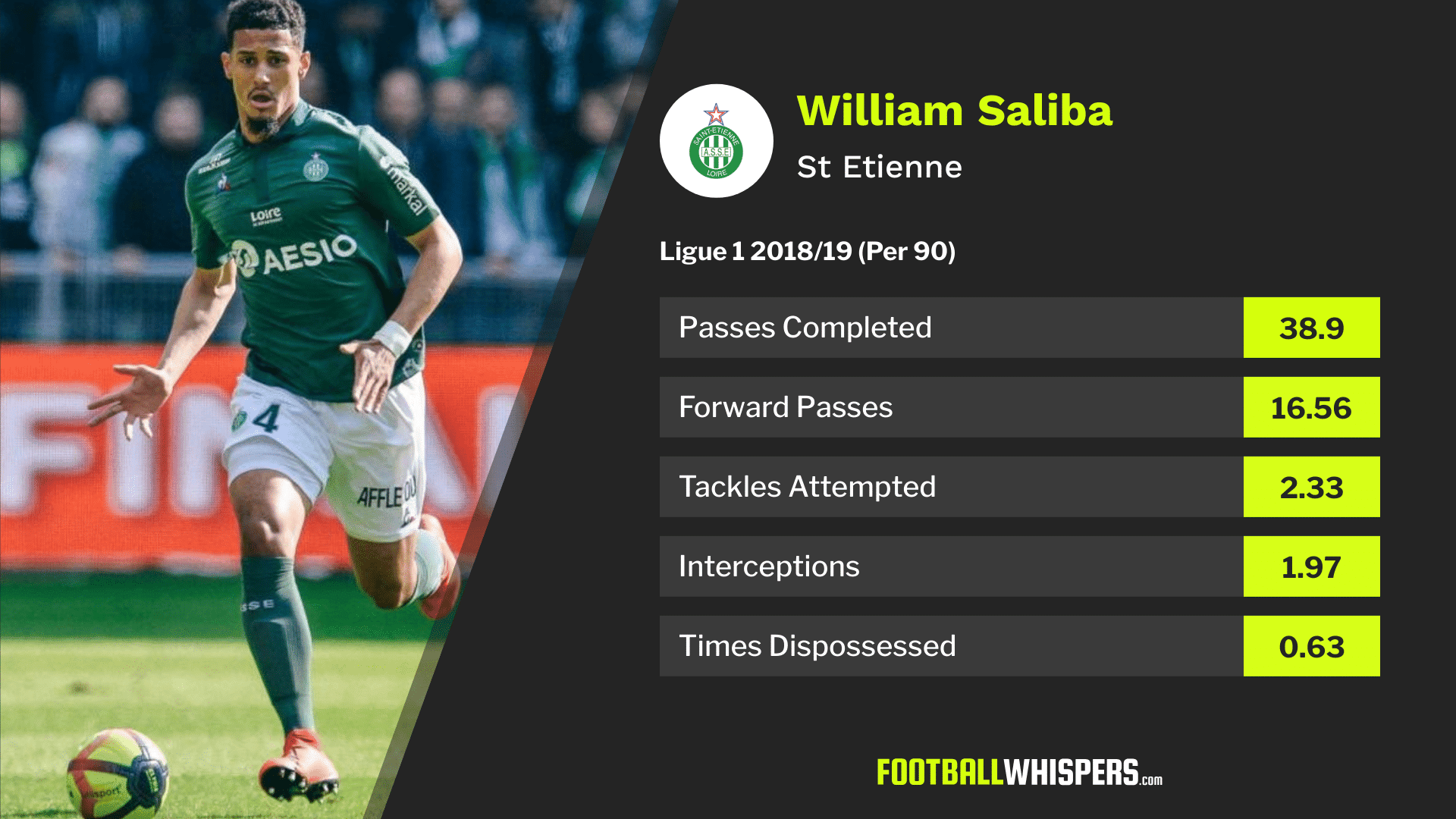 If he continues to impress for St. Etienne then that list of admirers is only going to grow. The French youngster has all the swagger of Paul Pogba in possession and regularly carries the ball into midfield.

When pressed it would be easy to mistake him for a seasoned winger. He casually slaloms past opponents and has them dancing to his beat.

Saliba would be comfortable in midfield; he’s that good.

He makes everything ball related appear effortless. He can thread a pass into an attacker. He can play an incisive ball into midfield to split the defensive lines. He can ping a pass 50 yards and switch play with the drop of a shoulder.

RB Leipzig have a knack for spotting and then developing young talent. The Bundesliga club give players an opportunity, no matter what age they are.

Naby Keïta honed his craft at the Red Bull Arena. ‎Die Bullen unleashed Timo Werner as an attacker onto the world. And Dayot Upamecano went from being a raw centre-back to being one of the most highly-rated youngsters in Europe while playing for the Bundesliga club.

But his injury woes during the 2018/19 season opened the door for Konaté. The 20-year-old Frenchman joined the Germans in June 2017 from Sochaux. He was used sporadically during his debut season with the club, appearing in 1,227 minutes in the German top flight.

Despite this, he managed to impress enough to get the nod for RB Leipzig in the heart of the defence when Upamecano wasn't available.

He didn't look out of place in what turned out to be the Bundesliga's sternest defence.

Are you #Messi in disguise Ibrahima #Konaté? ? #TuesdayThoughts

Standing at 6ft 4ins, he's physically imposing. He's also obnoxiously calm, whether that be when faced by one of the most potent strikers in Europe in Robert Lewandowski or simply looking to take the ball out from the defensive third.

The 20-year-old the sort of defensive signing a club should make if they have plans of creating a dynasty. Build around him. Make him captain. Even break a transfer record to secure him, if needs be.

The wildcard on the list. Schuurs was signed as a potential replacement for de Ligt by Ajax in 2018. Already linked with Liverpool, the 6ft 3ins centre-back is on the radar of many of the top teams across Europe.

His composure on the ball really stands out and he's even been deployed in midfield in the past. Used by Jong Ajax in the Jupiler League, he's been coming to terms with the way the Eredivisie champions play the game.

He won't be moving anytime soon but if he impresses for Ajax, just as De Ligt did, then it will be hard to ignore him. Especially given he's got a unique selling point: his long-distance shooting.

Schuurs is one to watch over the next couple of seasons but if he progresses as expected he could be more in-demand than his predecessor ever was.