Ever since striking hotshots Jamie Vardy and Charlie Austin rose from the depths of non-league football to top-flight stardom, Premier League and Championship clubs have been on the lookout for the next rough diamond to emerge from a team outside the EFL.

With fellow strikers Troy Deeney and Danny Ings having enjoyed successful loan spells at semi-professional sides, gone are the days of overlooking players plying their trade in the competitive world of non-league football.

We take a look at four hot prospects who could make the step up from the National League to the upper echelons of the English pyramid.

Bees’ boss John Still is widely regarded as the master of mining the lower reaches of the non-league game for untapped talent. His discoveries while manager of Dagenham and Redbridge included Dwight Gayle – a young striker playing for Essex Senior League side Stansted FC – who went on join Peterborough United for a club record fee of £470,000, before eventually playing in the Premier League for Crystal Palace and Newcastle United.

Early signs suggest that Barham is adjusting to the step up to National League level like a duck to water. Initially brought to The Hive as ‘one for future’, the youngster has forced his way into the first team and found the net twice in four starts – coinciding with a five-match unbeaten run for the Bees. An instinctive finisher with a relentless work ethic off the ball, Barham is a player with all the qualities to continue his rise up the divisions in the coming years.

The 22-year-old began his professional career at League One side Colchester United, failing to score more than three league goals in a season as the U’s dropped into the EFL’s bottom rung in 2016. But a fresh start at National League level has revived Bonne’s fortunes, making him one of the most sought-after strikers in the fifth tier.

The Zimbabwe international hit a remarkable 25 goals in 52 games during his debut season at Brisbane Road, helping the O’s to consolidate their position in the National League after a traumatic relegation from League Two.

While many people expected Bonne to move on to a bigger club in the summer, he instead signed a new deal with Orient until 2020 and has started this campaign in similarly impressive fashion – propelling the east Londoners to the playoff places with four goals in the opening month of this season.

Bonne’s lethal combination of instinctive positioning, movement in the box and clinical finishing means that it won’t be long before a club higher up the food chain take a punt on the Ipswich-born frontman. Leyton Orient may well need to win promotion this season to stand any chance of keeping hold of their biggest talent. 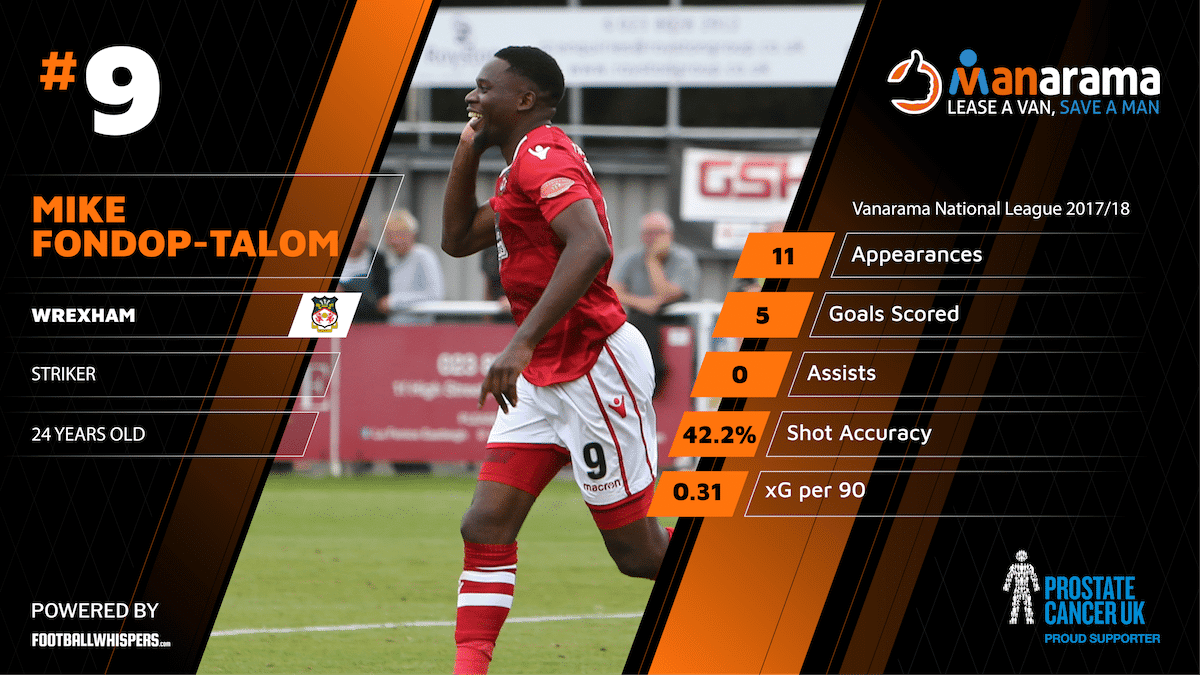 The National League is a physical division, where most successful clubs employ a powerful target man to operate as the focal point of their side’s attack – Lincoln City’s Matt Rhead and former Barnet striker John Akinde are just two examples of strong forwards who have led teams to the promised land of the EFL in recent years.

Perennial underachievers Wrexham will be hoping that Mike Fondop-Talom is the man to fulfil that role for them this season, in their quest to finally return to the fourth tier of English football.

Twenty-four-year-old Fondop-Talom arrived at the Racecourse Ground this summer, having just helped fellow National League club Halifax Town avoid relegation in 2017/18. While never previously prolific in front of goal – scoring just seven times for Guiseley and the Shaymen in the last campaign – the Wrexham No.9 has begun this campaign in impressive form, hitting the back of the net on five occasions in just ten appearances.

The old adage that a striker is only as good as the supply he receives may well explain Fondop-Talom’s newfound potency in front of goal; while both Guiseley and Halifax have struggled in recent years, Wrexham are just one place off the summit of the National League and have a squad packed full of talent for this level.

If Fondop-Talom can continue to add goals to his outstanding hold up play and aerial ability then he will become a prime candidate to go all the way to the top – the Red Dragons’ forward is undoubtedly one to watch out for.

Maidenhead United manager Alan Devonshire is used to operating on a shoestring budget, having worked with minimal resources at clubs such as Braintree Town and Hampton & Richmond.

Now back at the Magpies for a second spell in charge, the experienced coach has become adept at improving players and selling them onto bigger clubs – this summer alone, winger Sam Barratt joined Southend United, Harry Pritchard signed for Blackpool and Max Kilman departed for Premier League-bound Wolverhampton Wanderers.

Next off the conveyor belt could be young striker Josh Kelly, who has started 2018/19 in impressive form after breaking into the Maidenhead United first-team set-up.

The 19-year-old began grabbing the headlines while on loan at Walton Casuals last season, where his incredible 40 goals helped win the Isthmian League South playoffs for the Stags.

This goal-scoring prowess alerted Kelly’s parent club to his potential, and he has been rewarded with five starts and a handful of substitute appearances so far this season. The energetic forward certainly hasn’t let his manager down, finding the net three times, including a well-taken brace against Eastleigh earlier this month.

With pace, composure, and an eye for goal, Kelly really could be the next Jamie Vardy to emerge from the National League. The striker has youth on his side, a experienced manager to help him develop and a staggering goal record in the lower reaches of non-league football, hinting that there is much more to come from Maidenhead’s hottest prospect.