Liverpool fans have been hurt many times in the past. Steve McManaman and Michael Owen left for Real Madrid, Fernando Torres made the switch to Chelsea, Luis Suárez orchestrated a move to Barcelona and, a couple of years later, Philippe Coutinho joined him. Supporters are used to seeing their best players move on and because of this, it's difficult to trust.

However, with the Reds back at the top table of European football, speculation surrounding their famed front three isn’t as rabid as it once was. Yet paper talk regularly links one of Mohamed Salah, Roberto Firmino or Sadio Mané with a move away from Anfield.

Recently, it was Firmino to Bayern Munich. Not long after that was laughed off, reports emerged to suggest Mané was, once again, on Real Madrid‘s radar. All the while, random stories pop up online claiming Juventus, Paris Saint-Germain and Barcelona all have an interest in Salah.

The Athletic's James Pearce says the attacking trio are happy on Merseyside and the Reds have no intention of selling any of them. But the doubt over their futures is intrinsically linked to possible arrivals, at least in the eyes of fans.

With the Premier League leaders reportedly interested in Kylian Mbappé, Jadon Sancho and Timo Werner, it is inevitable, almost natural after what has gone on previously, that talk turns to which of the famed front three will be departing to make room.

If Liverpool did have to cash in on one of them to finance a summer of spending, who should it be? There’s no easy answer to that question. But, here, we attempt to do just that. 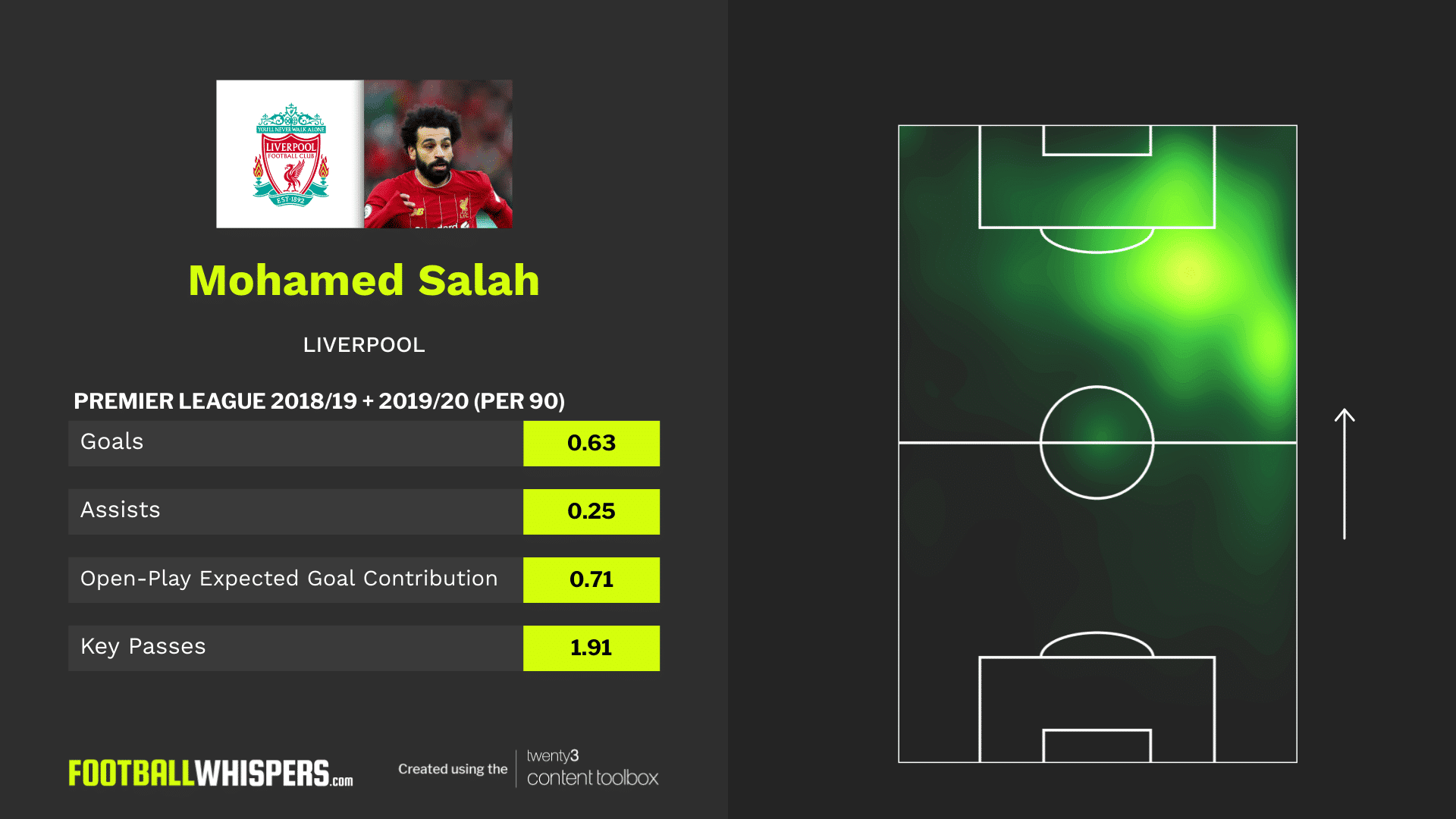 Since returning to the Premier League in the summer of 2017, no player has been involved in more goals than Salah. The former Roma man has bagged back-to-back Golden Boots and, in the process, broken the record for most goals scored in a single campaign (32 in 36 appearances).

The £37million signing has 14 for the season to date and since finally shrugging off the ankle injury he sustained against Leicester City, he's been in fine form, scoring five goals in six in 2020.

But Salah isn't just a goalscorer, he's also a creator and this is an underappreciated part of his game. Over the past three seasons, he's chipped in with 24 assists. In terms of open-play expected assists, he leads the way when comparing the front three, 0.05 ahead of Firmino on a per-90 basis.

In terms of sheer output, the Liverpool No.11 is peerless at Anfield and replacing his all-round game would be near impossible. Sancho is posting similar numbers to those Salah averaged in Rome but there's no guarantee he'd be able to make that step up as seamlessly as the 27-year-old did.

When people jokingly say that the Brazilian is the system for Liverpool, they aren't actually joking. Firmino is the poster boy for what Jürgen Klopp has done at Anfield since taking over. The German tactician reshaped how the 28-year-old played football.

The former Hoffenheim man is the best catalyst in Europe. Maybe even the world. Without him, Liverpool aren't the same. Without him in their XI, the Reds are by no means as fearsome. 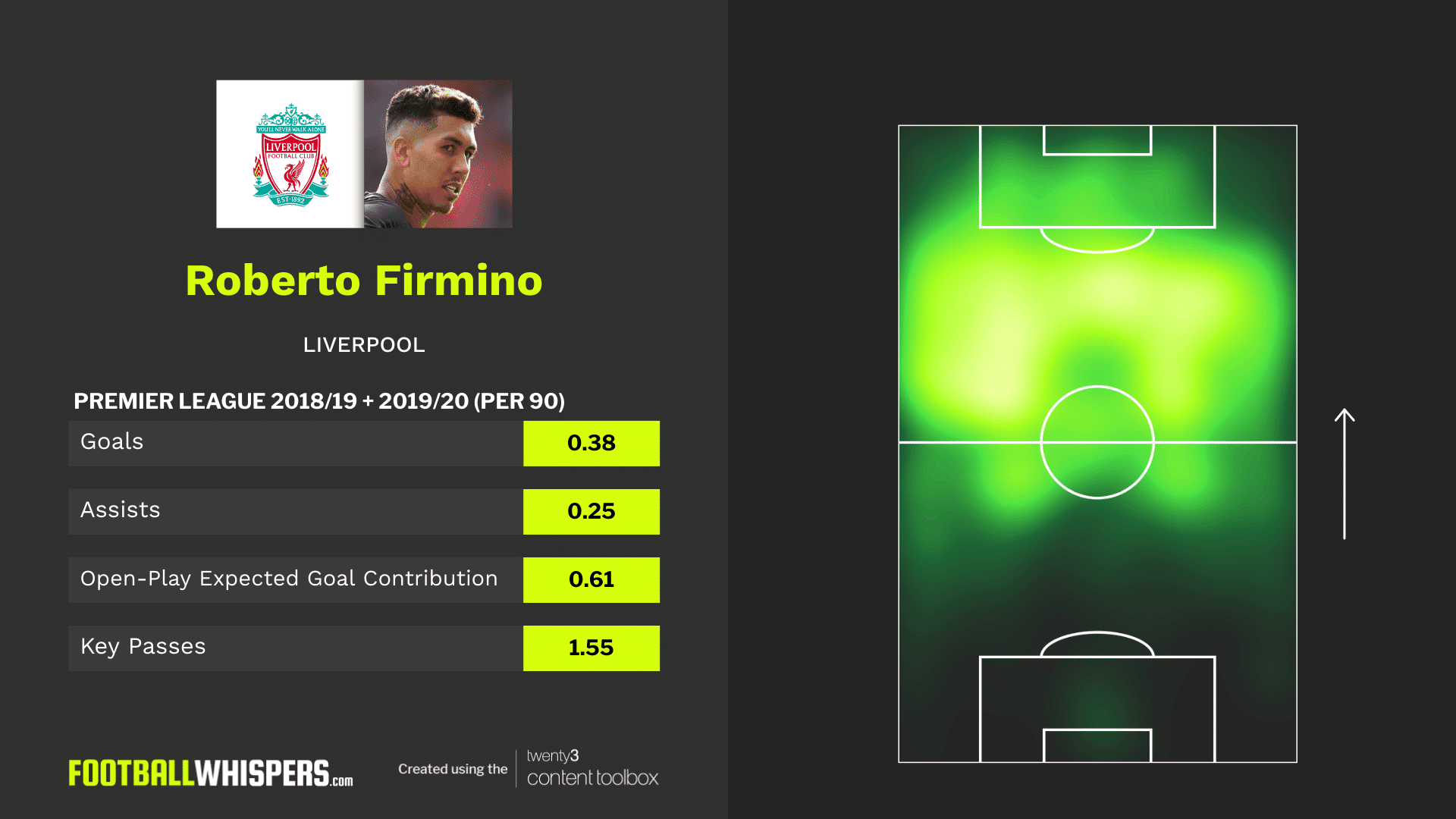 He doesn't score as often as Sergio Agüero, but he doesn't have to. His role in the team is to facilitate and nobody can replicate what he does, at least not as well as he does it.

By no means prolific, Firmino is still expected to be involved in 0.61 goals per 90 in open-play, just 0.10 shy of what Salah averages. He's still a threat but what makes him so valuable is everything he does off of the ball. The stuff you can't quantify and the bits which don't make the highlight reels. That is what makes Firmino so important to this XI. It's what makes him impossible to replace.

Coutinho's departure to Barcelona was supposed to leave a void in the Liverpool team but Mané's exploits meant the Brazilian maestro wasn't missed. After acting as the creator-in-chief for a period of time, the former Southampton man decided that goalscoring was for him.

He claimed the 2018/19 Golden Boot, along with Salah and Pierre-Emerick Aubameyang, by netting 22 times, just one fewer than he'd managed when combining his previous two campaigns together.

Nobody saw it coming. But Mané went about proving it wasn't a one-off and before he hobbled off against Wolverhampton Wanderers, he had 11 league strikes to his name. For context, before his 22-goal haul, his best return in England was 13. 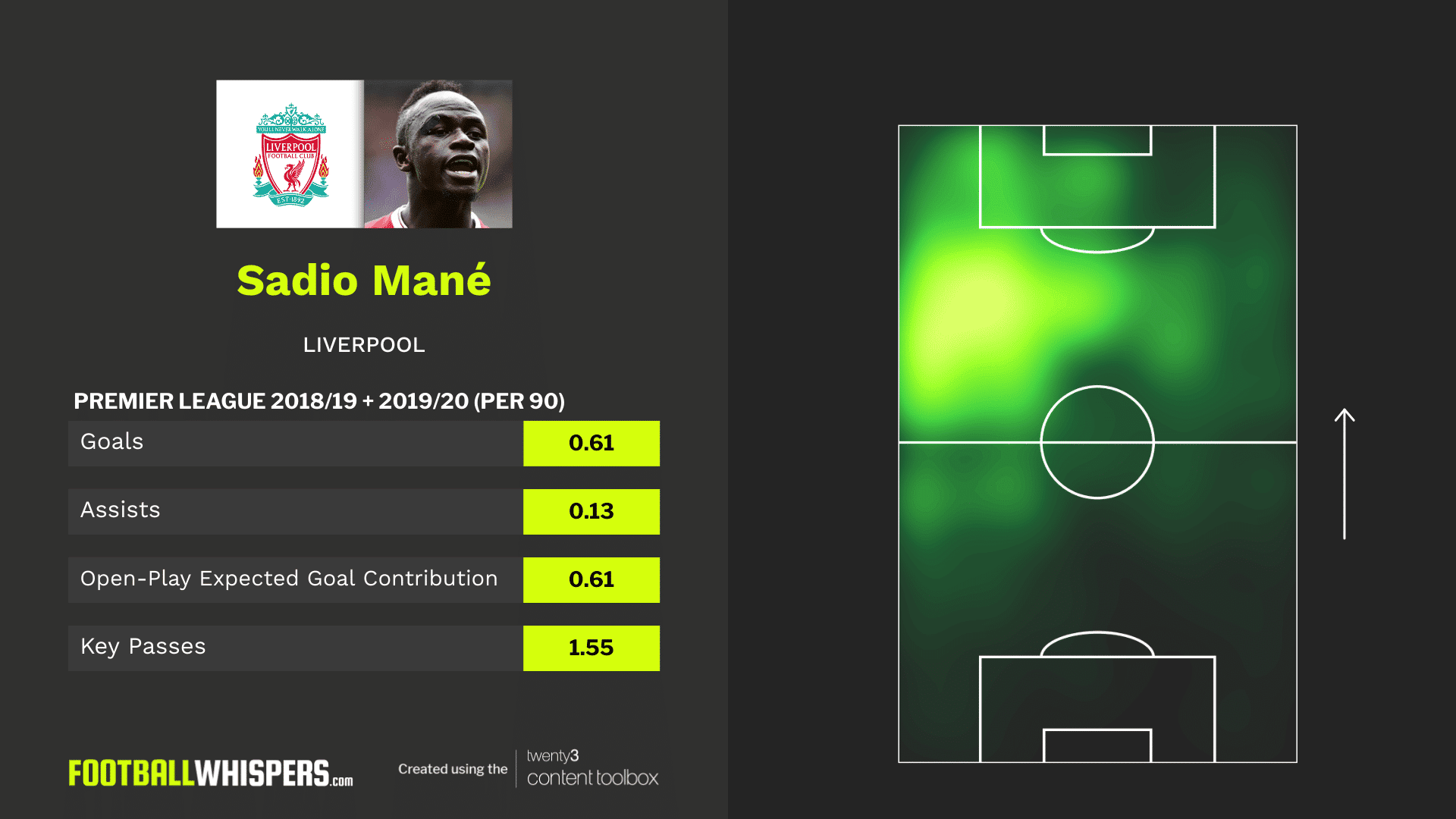 Since the start of the 2018/19 season, Mané has kept pace with Salah in terms of goals per 90 though he's closer to Firmino for open-play expected goal contribution.

If you're looking at output and general influence on the team, Mané isn't as important as the other two, despite his big performances for the Reds on a regular basis.

So if Liverpool did have to cash in on one of the three, Mané would be the player, purely by process of elimination. But fortunately for the league leaders, as detailed here, the Reds don't have to sell any of their forwards in order to bring in Werner and Sancho.