Tottenham Hotspur were hot favourites to land Argentine centre-back Juan Foyth this summer but it seems the north London club will be beaten to the punch by Paris Saint-Germain.

However, Mauricio Pochettino has a plan B and Filip Benković is reportedly the next name on the Argentine’s list.

According to The People, the 20-year-old is a Spurs transfer target and they suggest he could be available for £13.5million.

Although they failed to win a single point, the defender, who is also competent in the defensive midfield role, did enough to impress.

Standing nearly 6ft 4ins tall, Benković is an imposing figure, but he is very mobile for his size and is a lot quicker than his frame suggests.

Able to play across the centre-back positions, he has shown that he can play off both feet and, although most comfortable on his right, he often lines up on the left-hand side of defence.

Can Spurs Compete In The Transfer Market? | FWTV by FootballWhispers

An obvious threat from set-pieces, Benković has the coordination to meet crosses with well-timed runs, and causes enough panic in the penalty area that his knockdowns can often lead to goals.

Jan Vertonghen is one of the best defenders in England, but now 30 years old, Pochettino must start thinking to the future. The Belgian is excellent at bringing the ball out from the back and eagerly joins in the attack from left centre-back when Spurs play with four or three in defence.

Benković has that same composure on the ball. Holding possession whenever needed, he never looks rushed and has the footwork to pass off both sides and then gets his head up and find long ranging passes from deep.

In the images below, you can see the left-back knock the ball back to Benković with the opposition forward already on his way to close the centre-back down. 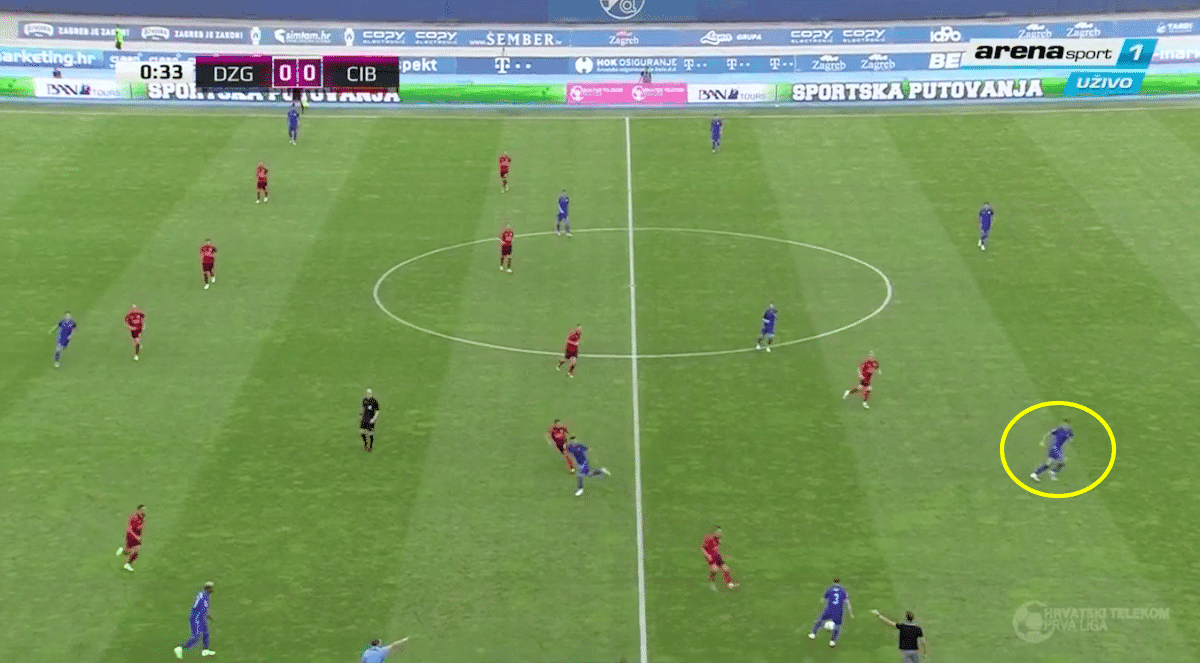 Rather than take the easy option out, the Croatian has the quality to turn on the ball, beat the forward and then pick out his team-mate on the other side with a smart left-foot pass under pressure. 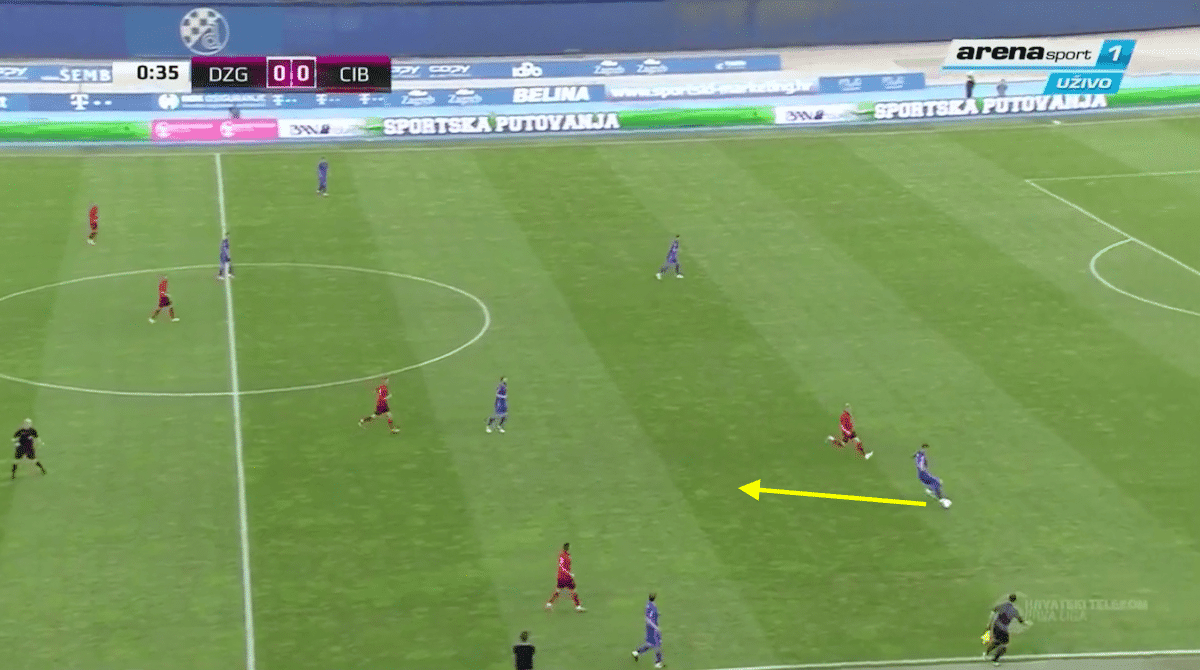 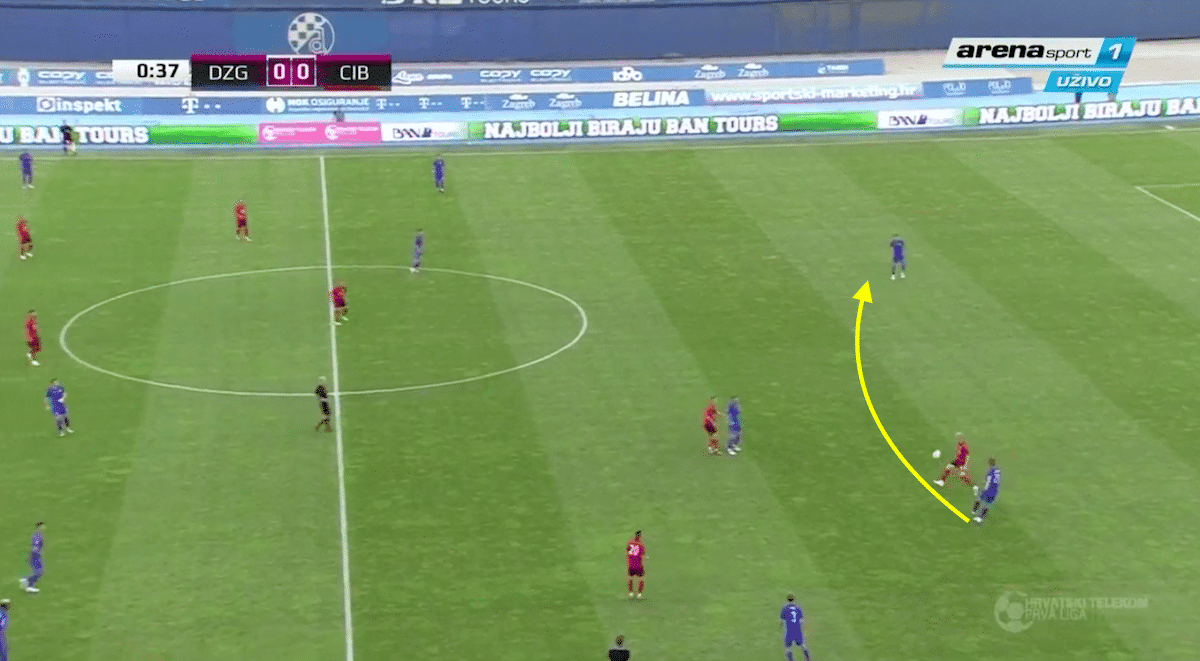 When space becomes available, Benković can, like Vertonghen, dribble up field, drift past his markers and push the ball up the park.

You can see how he would fit in the Spurs back-line. Playing either on the left or the right of a back four, and when Pochettino goes to a three, he can allow Vertonghen to move centrally.

There’s no doubt that the Croatian Under-21 international loves a tackle. When put in a dangerous situation, he is eager to go to ground, making a slide tackle to cover the situation.

He has the speed in his long legs to cover ground quickly, closing down attackers and getting a toe on the ball.

One area where he must improve is picking and choosing where and when he dives in, however. In his youthfulness, he is over-eager and it can leave his defence short. 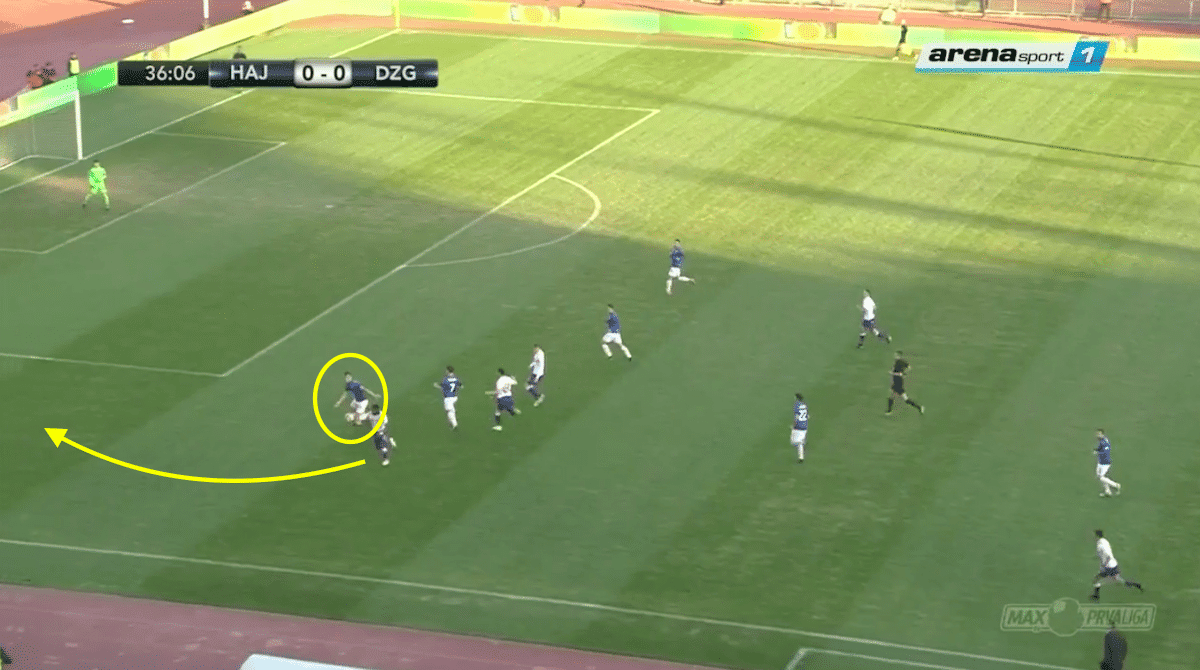 In the still above, the Hajduk Split forward goes wide and although Benković has the speed to cover him, he decides to go in with his left-foot. 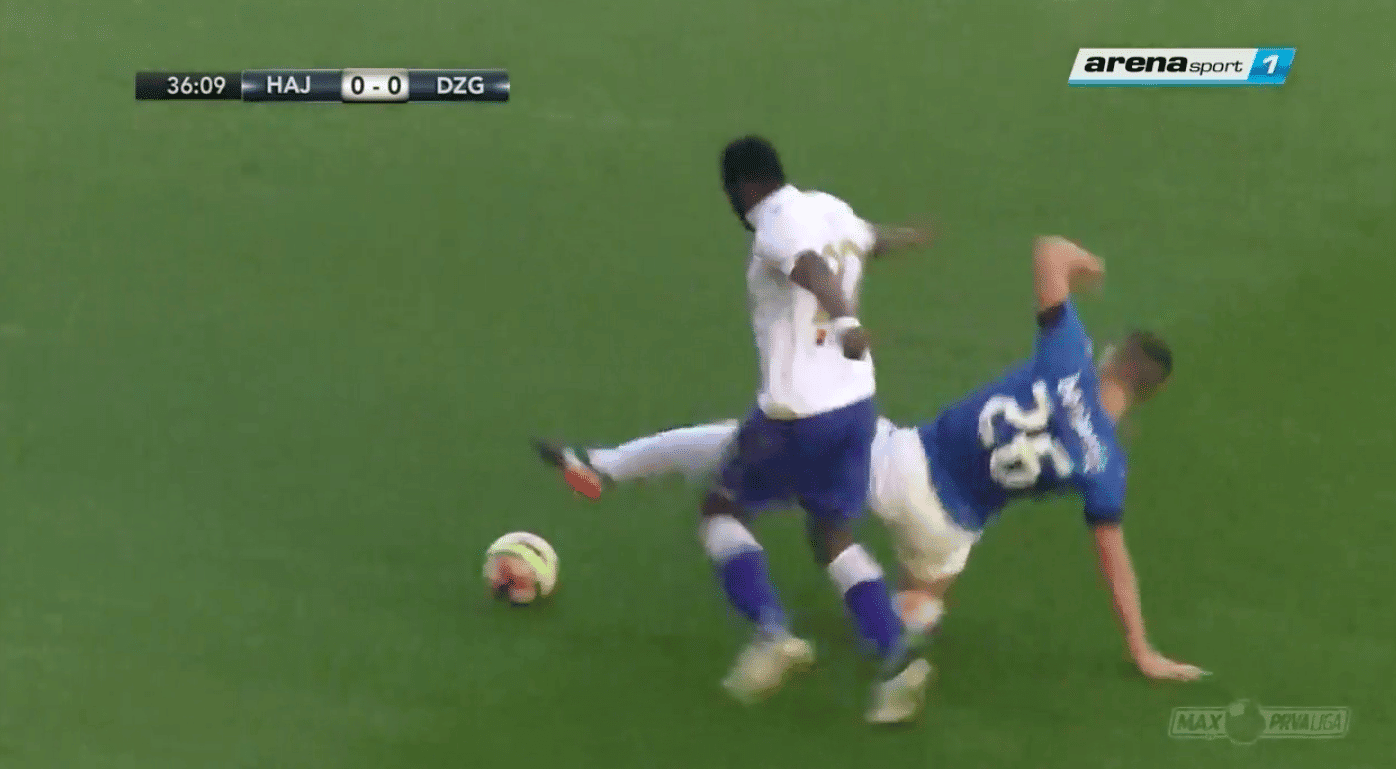 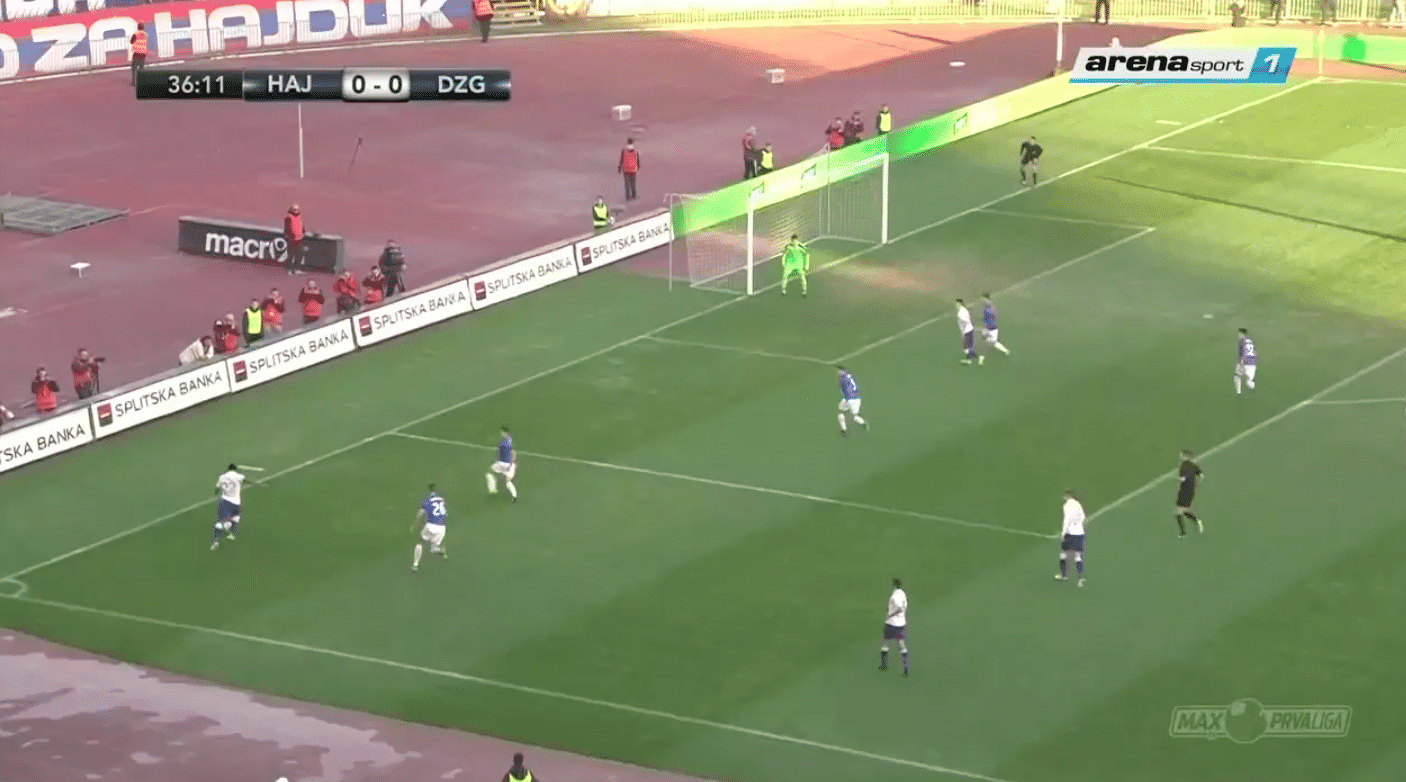 He misses the tackle and leaves the player unmarked on the left-flank. The cross is fired across and luckily for Benković and his team, there is a lack of options through the middle and the danger is cleared.

The above example doesn’t mean he always goes to ground easily. It’s just a part of his game that needs fine tuning. He’s still very young, but has the physical and mental attributes to become an excellent young defender.

Benković can use his body well, he’s agile for a big man, and gets his legs into the positions needed to disrupt attacks. Plus, when he goes wide to cover, he has the speed to track smaller players without looking awkward and exposed.

When he gets it right, Benković uses his large frame to stay in front of his man to cut down their options and then can either put a tackle in, or out-muscle them.

Against Juventus in the Champions League, as the example below shows, can have a positive side to his defensive ability. 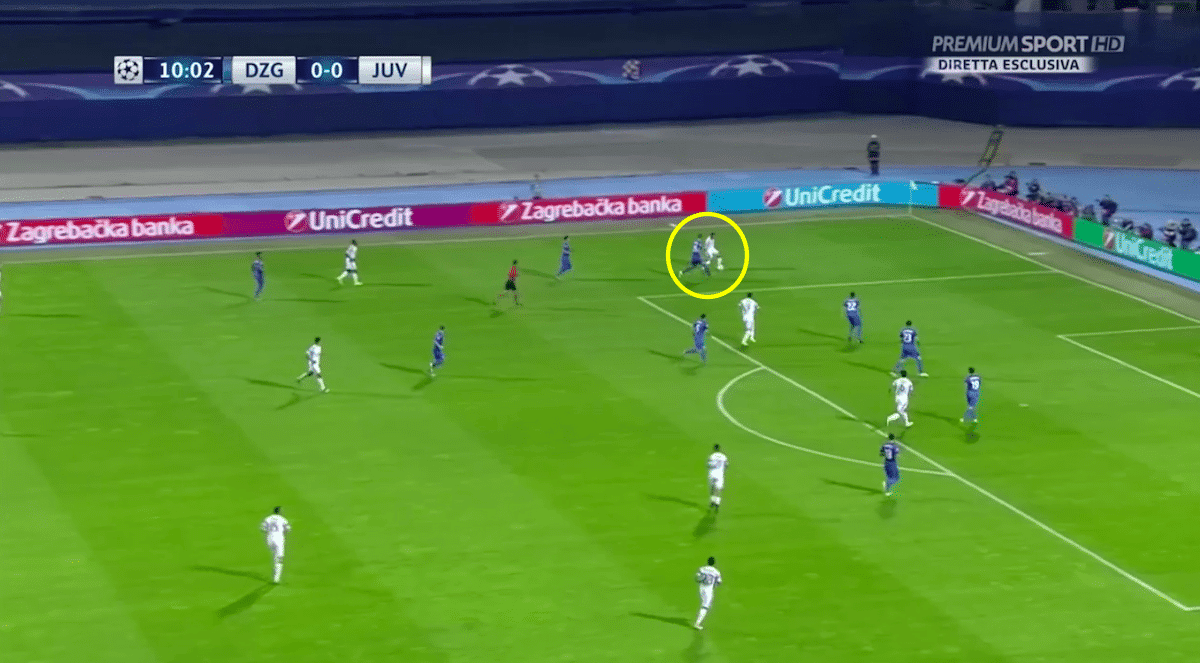 Miralem Pjanic stands up the centre-back wide on the Juve left. Benković, rather than jump into the tackle, holds his ground, forcing the Bosnian to make a move.

He goes to the by-line and the defender has the agility to match his run, force him wide and then make a well-timed tackle to concede a corner. 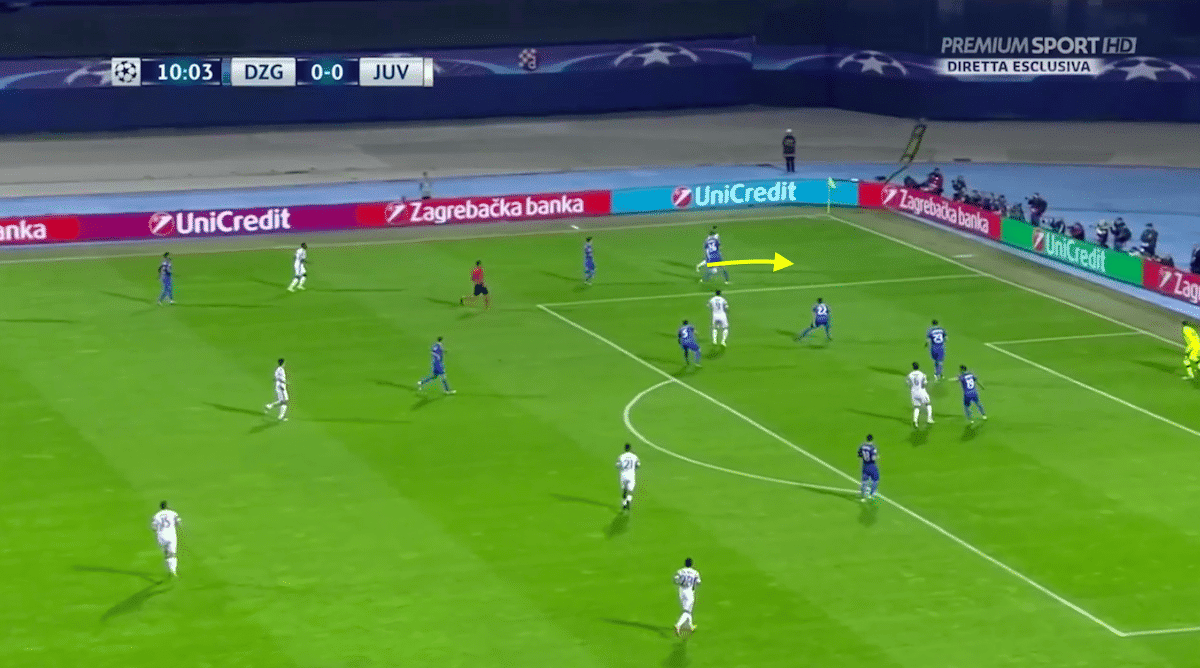 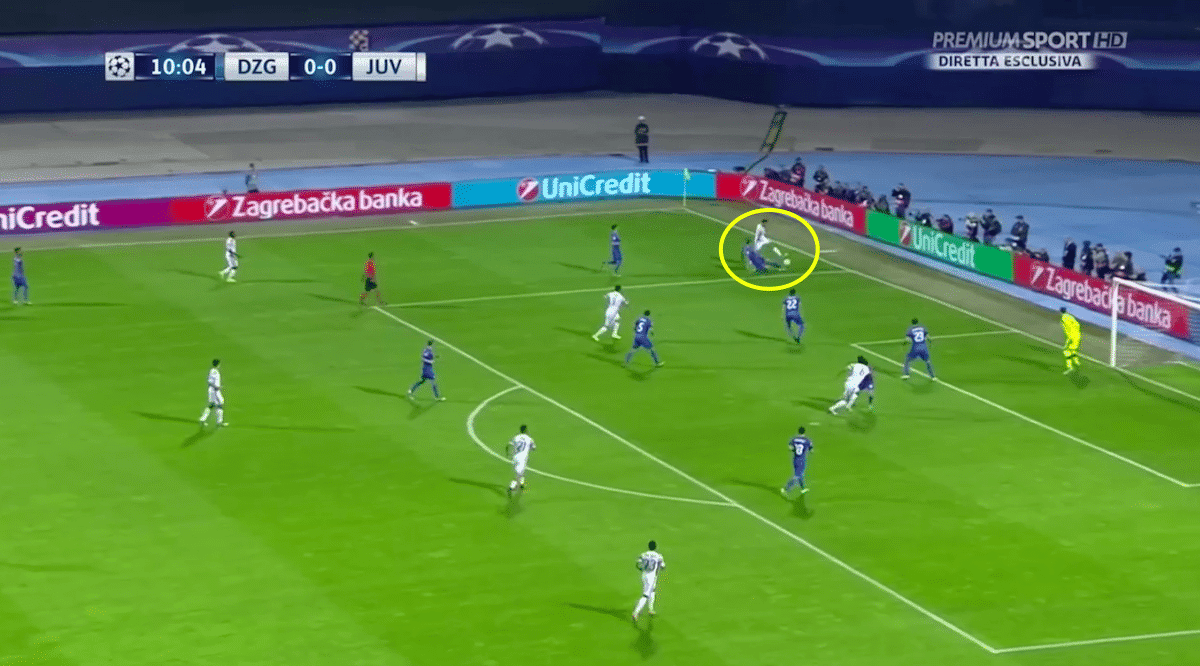 Most big centre-backs would have been beaten by skill or pace in that situation, but the 20-year-old does very well, showing his promise yet again.

WOULD HE LEAVE CROATIA?

In January, Benković signed a new extension that would extend his deal until 2022. But all this does is ensure the Croatian club would receive a favourable fee for the player who has been part of their system for the majority of his life.

“It all started when I joined Dinamo when I was five, five and a half. I came through the ranks here, playing for every team,” he told UEFA.com.

“What can I say? I live very near the stadium and right from the off I have tried to help the club, which I'm still doing today.”

A long-time Dinamo supporter, the defender recalls some of the great games of the past that he watched as a fan in the stands.

Now, he may get the chance to play against the Gunners in a north London derby should the move to Spurs come to fruition.

With only 33 league games under his belt, it might be too soon to make such a huge move, but used wisely and slowly, he has shown the ability to make the step up to the Premier League.

It’s clear to see the defender has potential and could become an excellent option in north London. He fits in with what Pochettino would look for, especially his composure on the ball.

Playing under the Argentine with Vertonghen and Toby Alderweireld to look up to, it might be the move that takes Benković to the next level.