Club Brugge may be comfortably clear at the top of the Belgian league, six points clear of Standard Liege with a game in hand, but they could be about to be burnt in the transfer market.

Sofyan Amrabat is currently on loan at Hellas Verona from the Belgian side and the deal includes a €3.5million option to make it a permanent move. And while that may have looked like good business when the deal was struck in the summer, it’d see Brugge pocket close to €1million in profit, the form of the Moroccan international has resulted in his stock being higher than ever before.

According to reports in Italy, Inter and Napoli are interested in a €10million deal for the versatile midfielder with West Ham United and Tottenham Hotspur also keen. Verona are going to make big money if they cash in immediately after signing him.

But how has the 23-year-old gone from being a bit-part player for Club Brugge to one of the most sought after midfielders in Serie A inside six months? Here, we take a detailed look at what the former Feyenoord man is all about. 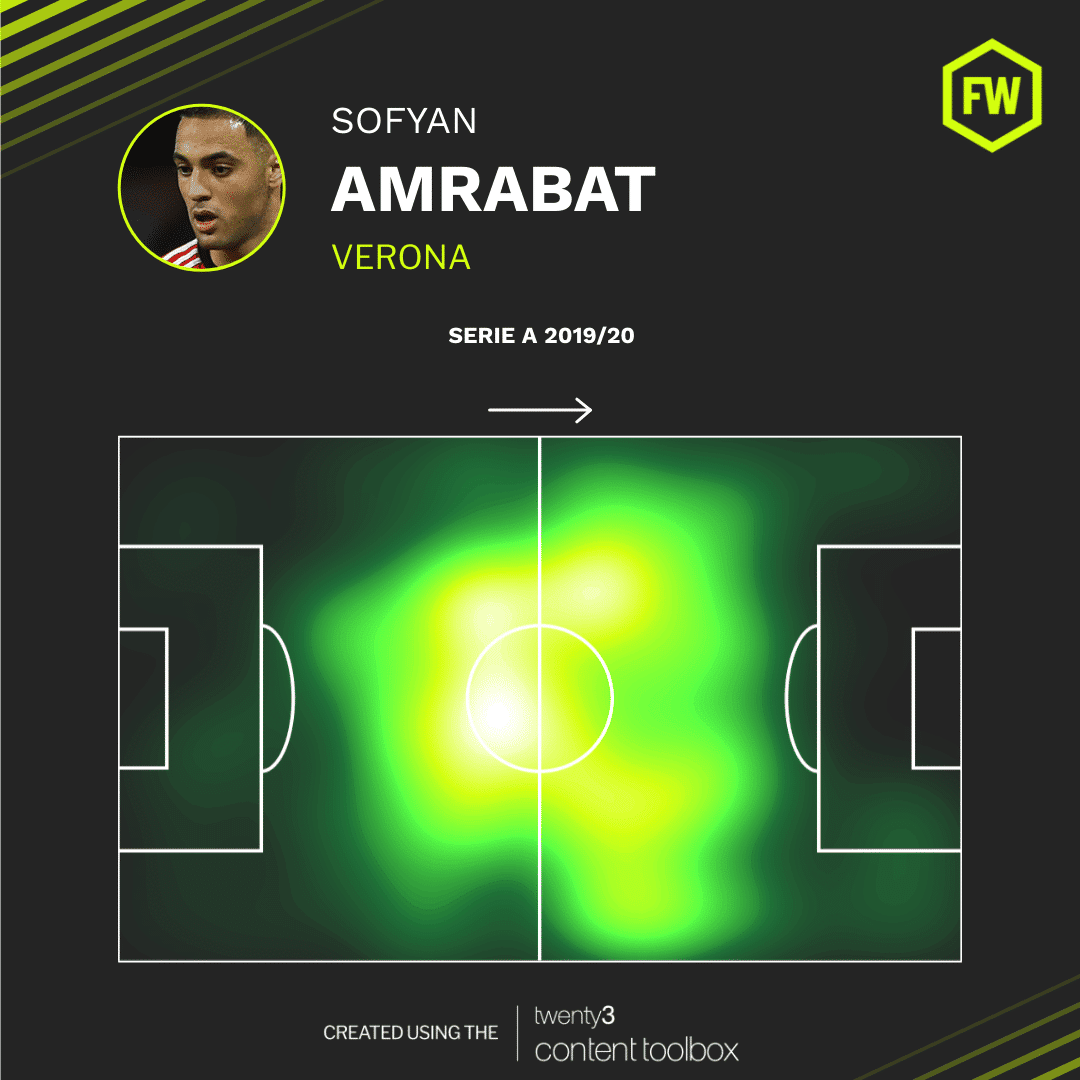 An all-action midfielder capable of playing in a box-to-box role as well as a defensive one, Amrabat has also played at right-back in the past. He's thrived for Verona while patrolling the middle third and orchestrating attacks.

He looks to pick possession up in deep areas and spread play. There's a bit of Jorginho about him in many ways but he's much more energetic.

Verona have been one of the surprise packages of the Serie A season. They currently sit ninth in the table, ahead of Milan and Fiorentina. They've got the second-best defensive record in the league, too, having only been breached on 11 occasions in their 13 matches to date. Only Juventus can boast a better record.

While this remarkable run isn't exclusively down to the exploits of Amrabat, he is playing a vital part. He's averaged four ball recoveries in the middle third per 90 and over two in the defensive third. The 23-year-old is, at times, a wrecking ball, with the opposition unable to find a way past him.

However, unlike other destroyers in world football, there's an attacking edge to his game. Not only can he pick passes, a variety of them, he's also a progressive ball carrier. In Serie A this season, Amrabat is averaging 3.41 attempted dribbles, completing 2.36 of them.

He's press-resistant and progressive. In terms of profile, he's exactly the sort of midfielder so many Premier League clubs are looking to sign. And, usually, they're prepared to part with big money.

Liverpool paid £50million to land Naby Keïta. Spurs paid a similar fee to secure the services of Tanguy Ndombele while Chelsea parted with £32million to sign N'Golo Kanté. That's not to say Amrabat will be as good as any of those, but he has a similar playing profile but for a fraction of the price.

Napoli appear to be leading the race to sign him, with the club looking for a successor to Allan who is a transfer target for Paris Saint-Germain. However, if a Premier League side can force their way into the running, they won't regret it if his performances for Verona are anything to go off.