Everton have continued an impressive summer in the transfer market by announcing the long-awaited signing of Malaga forward Sandro Ramírez.

The Toffees want to break into the top six after impressing in their first season under Koeman's charge with a seventh-place finish.  Romelu Lukaku and Ross Barkley could still leave but the Toffees have made impressive strides in the transfer market already.

Here we profile the Merseysiders' latest signing of an already busy transfer window at Goodison Park.

Who is Sandro Ramírez?

He made his debut for the B team in August 2013 and played 31 times, scoring seven goals as they finished third in the Spanish second division.

His impressive performances for Barcelona B earned him a call up to the first team at the Nou Camp and his career with the senior squad could not have got off to a much better start – he came off the bench to score a winner in 1-0 victory over Villarreal in August 2014.

Perhaps unsurprisingly, given that Barcelona arguably have the best attacking trio in world football at the moment in Lionel Messi, Luis Suárez and Neymar, Sandro found it difficult to have a proper impact in the first team.

He made just 32 appearances for the Blaugrana, scoring seven times.

That’s far from a bad return given the inconsistent nature of the opportunities he was given and it worked out at a goal every 158 minutes.

But a lack of composure in front of goal often let him down.

It looked like he was almost too eager to impress, leading him to overthink situations and scoring chances disappearing, or snatching at a shot when he needed a more measured finish.

And last summer, his lack of game time was a major factor in Barcelona sporting director Robert Fernandez deciding it was best for the young forward’s development to leave the Nou Camp. He subsequently joined Málaga on a free transfer. 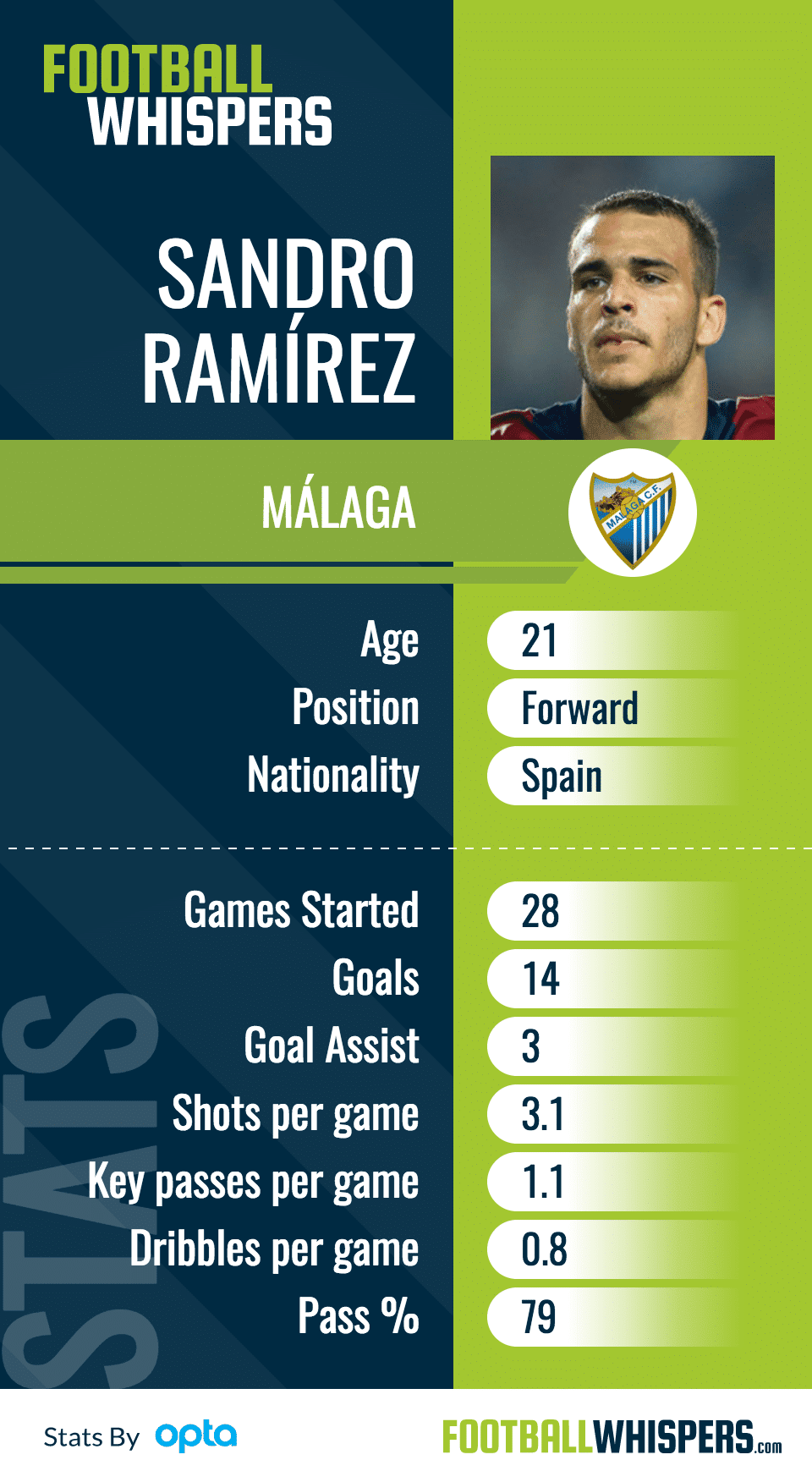 The combination of regular football and the chance to step out from the intense limelight in the Catalan capital proved a winning formula for Sandro.

The Spain Under-21 international has matured since last summer move and shown signs of fulfilling the potential he hinted at when coming through the youth ranks at Barcelona.

It was his breakout season in La Liga and he found a new clinical edge in front of goal, while retaining and polishing the technical skills that he were always in his locker, scoring 14 league goals – more than Neymar or Karim Benzema managed.

Anyone who watched him would have immediately noticed his work-rate and willingness to press the opposition and lead the defensive fight from the front set the tone for his side.

Comfortable on the ball and able to link brilliantly with midfield runners, Sandro can be unselfish when presented with a sight of goal. He doesn’t think twice about picking out a better placed colleague but that doesn’t mean he can’t score – as his record from last season shows.

And you can see his increased confidence in front of goal when you compare the statistics from the 2015/16 season at Barcelona and last year at Málaga.

At Barcelona, his shot accuracy was just 29 per cent, while it was 54 per cent last season at Málaga.

What does Sandro bring to Everton?

If you have a look at two of his games last season, against Tony Adams’ Granada and Barcelona, both 2-0 wins for his side, you can see just why Málaga manager Michel claimed he would give up part of his salary to keep Sandro at La Rosaleda.

He shows he’s not just a goalscorer and has a great eye for a pass too.

Against Granada, as you can see below, he picked the ball up on the left wing before cutting inside, leaving the defender for dead and playing a defence-splitting pass for his team-mate to get the shot away. 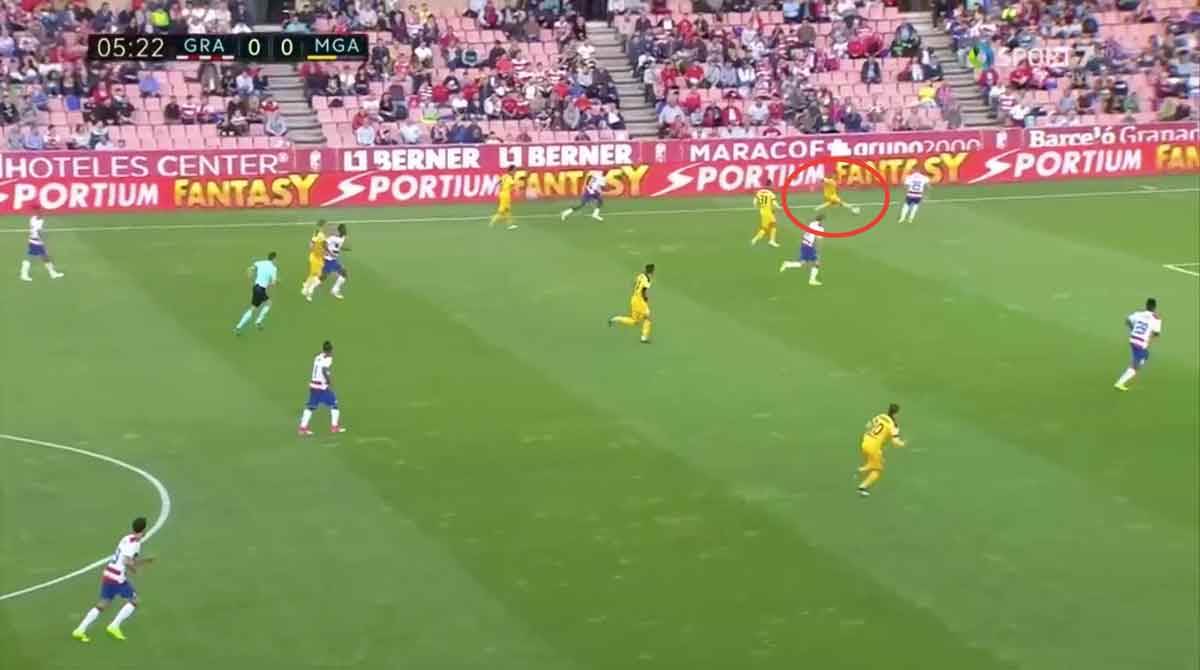 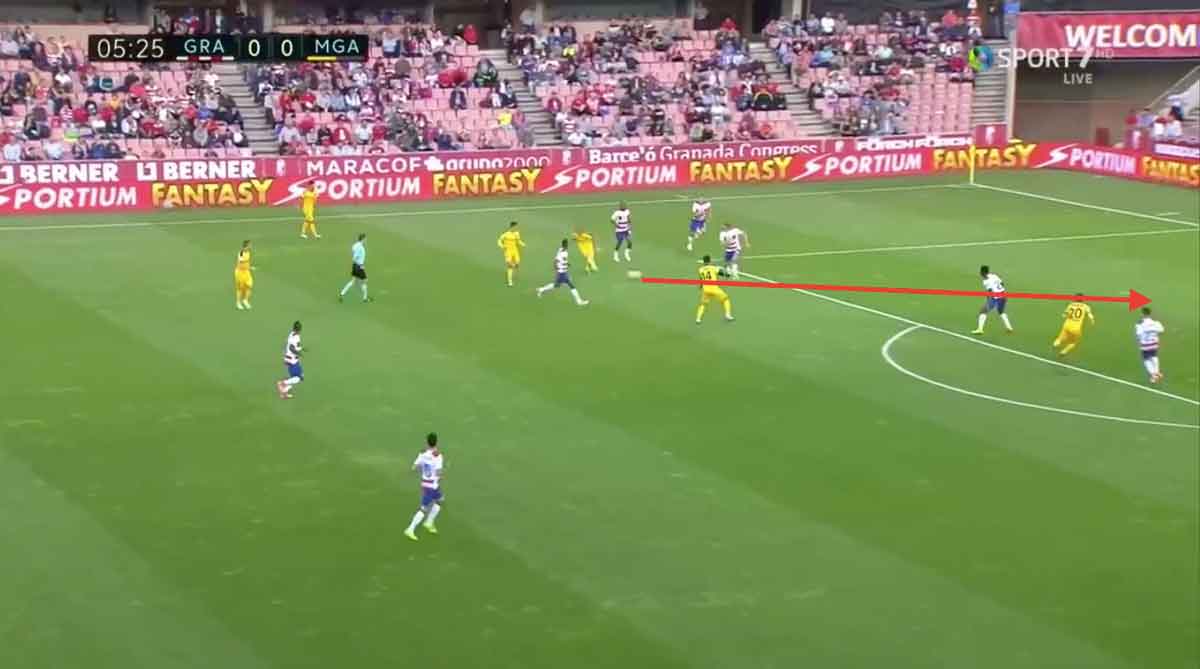 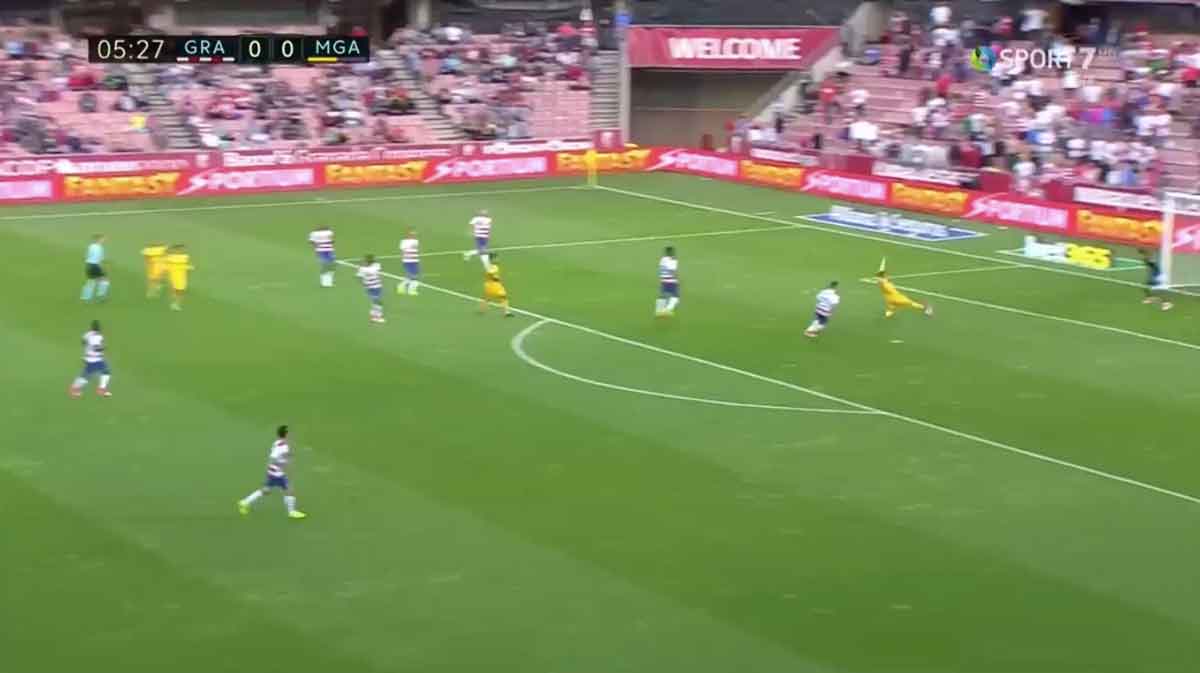 And again, his ability to play through balls that take out the opposition defence can be seen in the stills below. 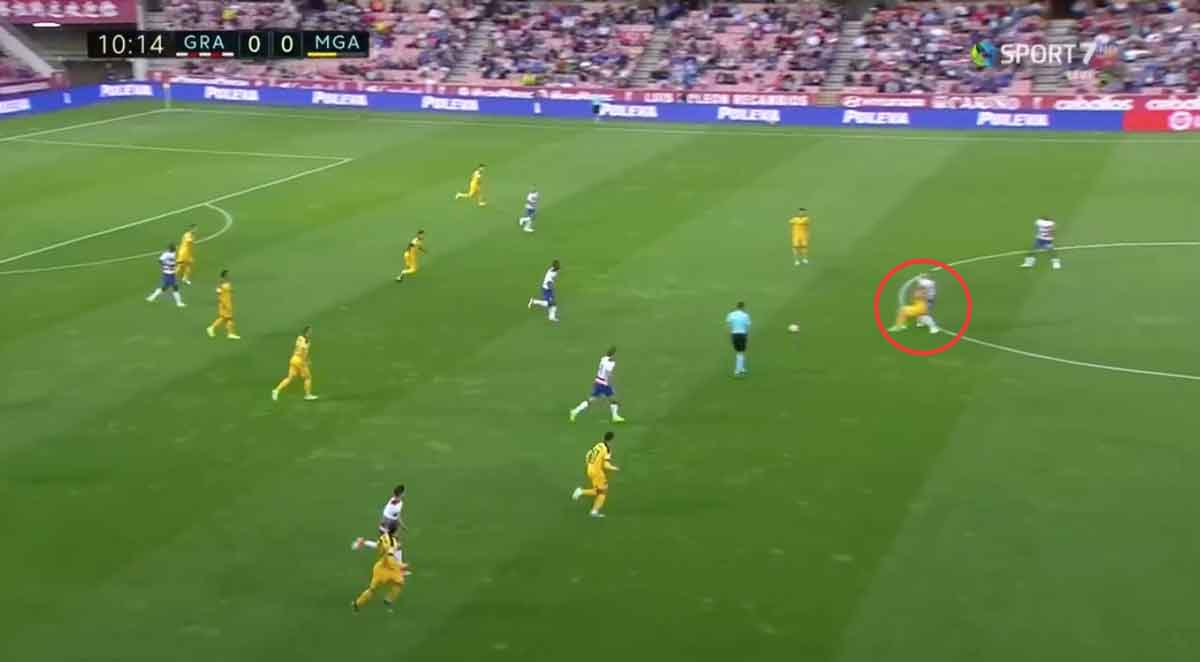 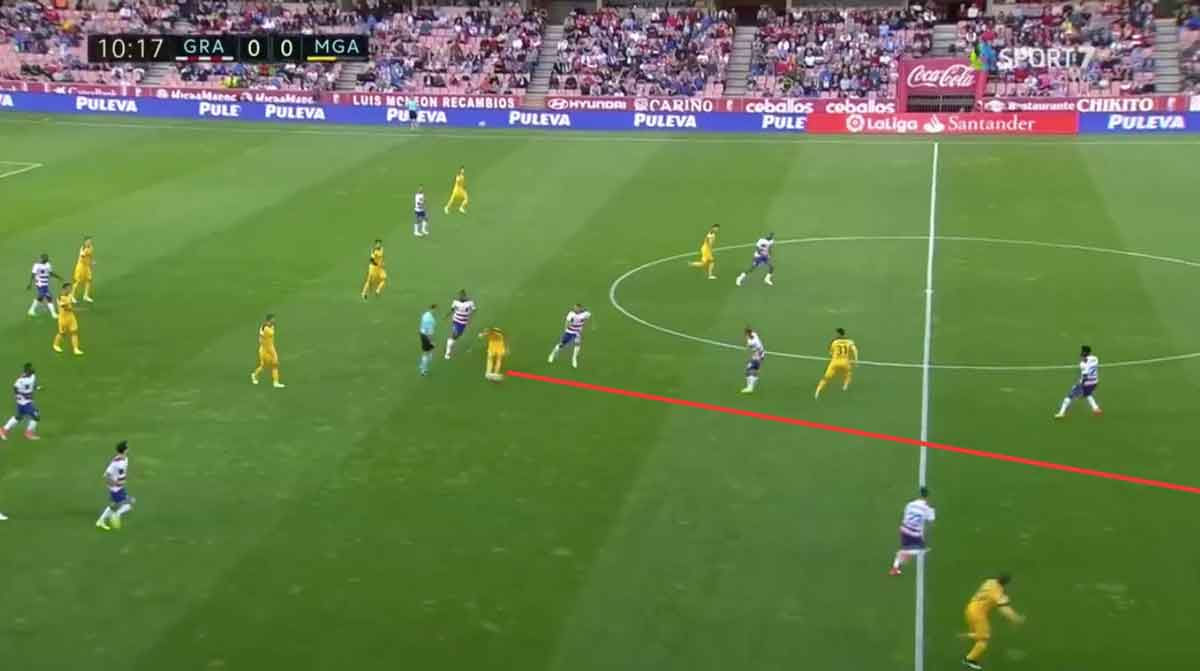 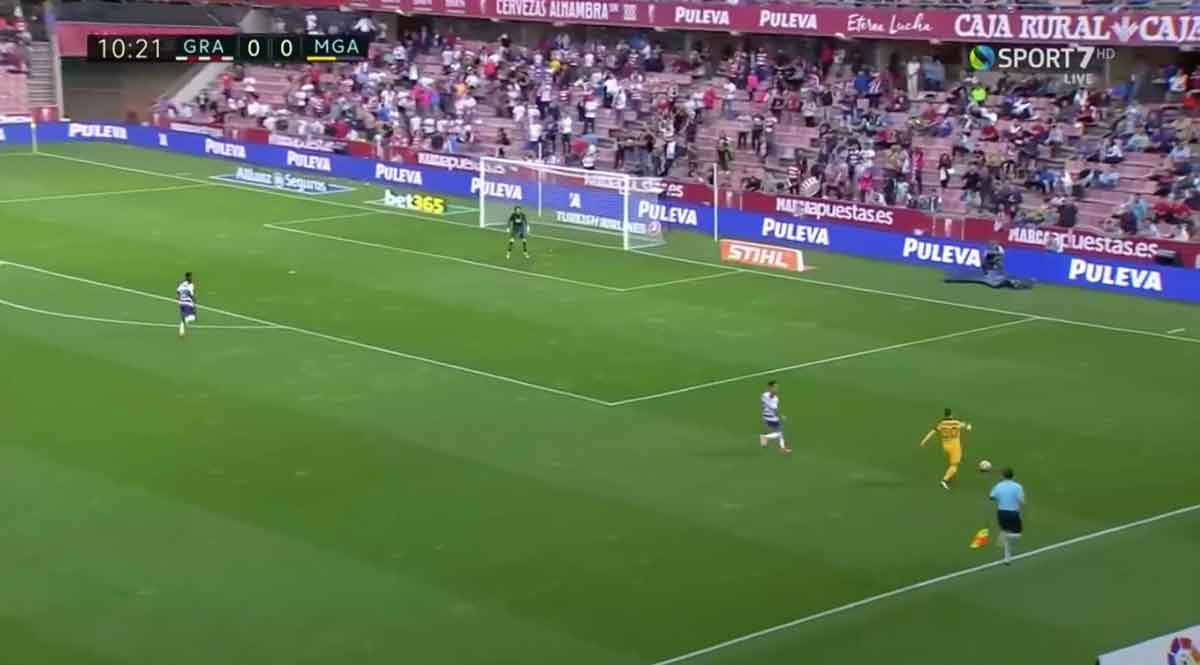 Sandro received the ball in the middle of the pitch, under pressure from a Granada man.

Despite backing into him and looking off balance, he keeps control of the ball, losing the man and playing a great ball which sends his team-mate free down the wing.

You can see just how perfect the pass is in the last picture, where his team-mate can get a cross in with his first touch of the ball. 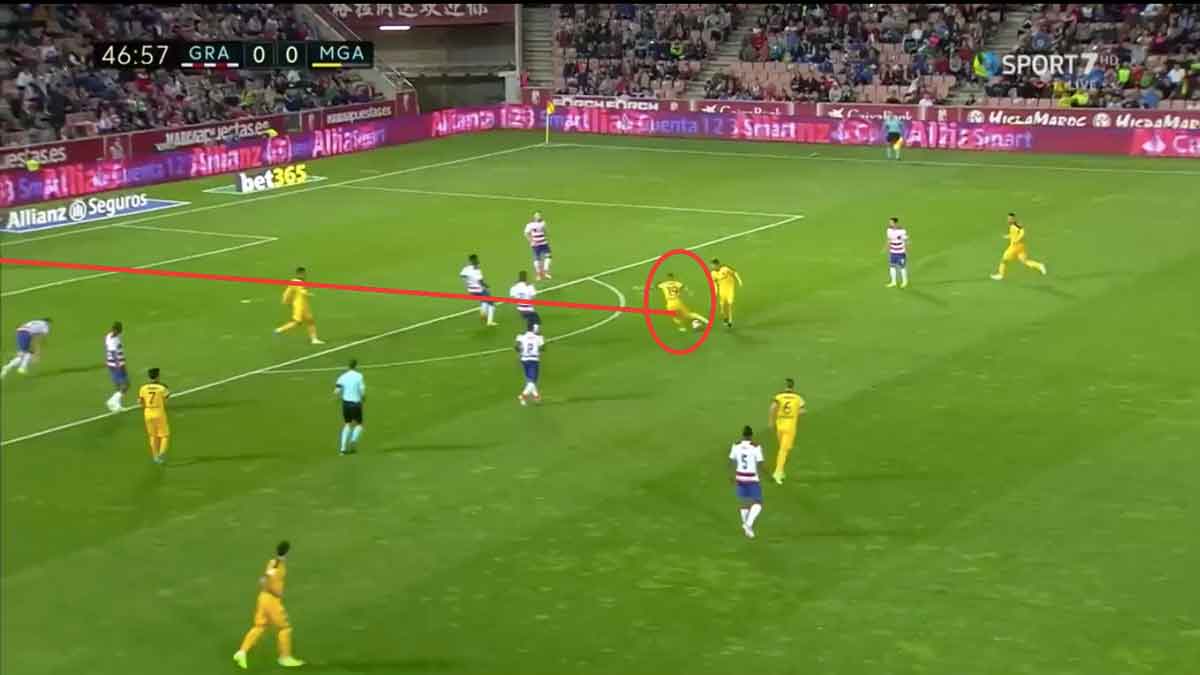 Sandro’s goal in the game underlined his predatory instincts as a striker.

He picked the ball up on the edge of the area and with his first-touch half-volleyed into the bottom corner before the goalkeeper had time to properly set himself.

When he scored against Barcelona, as you can see below, he showed just how good he can be.

He timed his run to perfection to get on the end of a long ball over the defence, using his pace to ensure he would get away from the defenders.

And as he found himself one-on-one with Marc-André ter Stegen, he was calm enough to send him the wrong way and place his effort low into the back of the net whereas, in the 2015/16 season, it would have been a chance that he’d send wide. 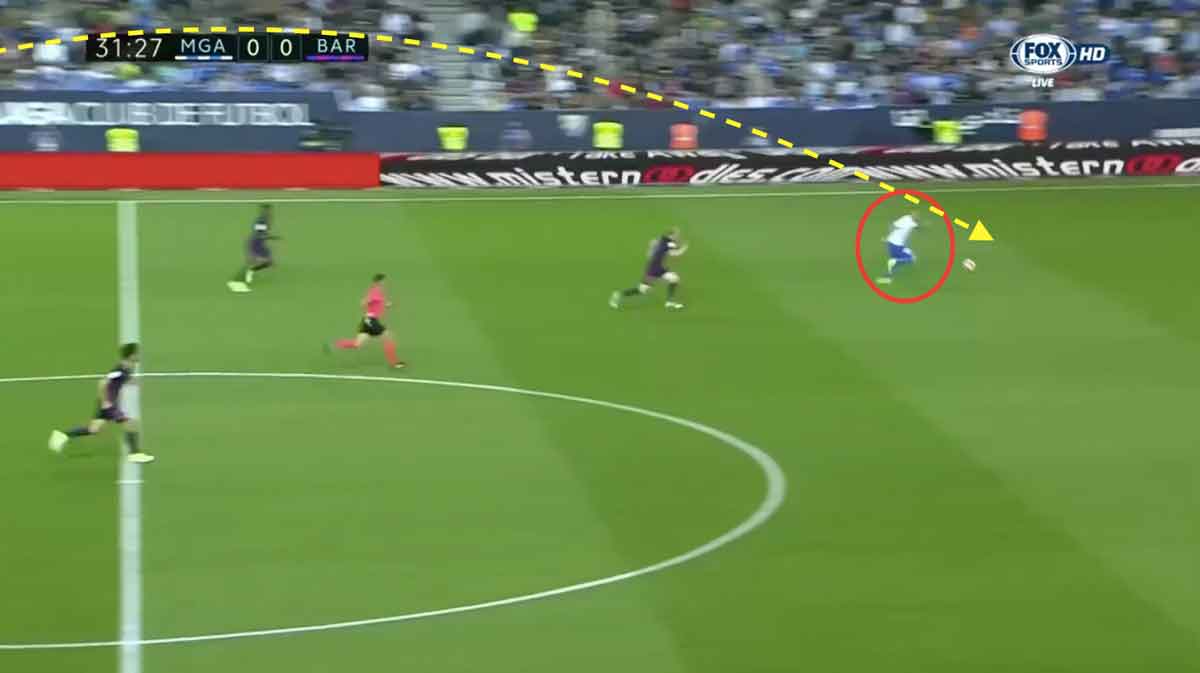 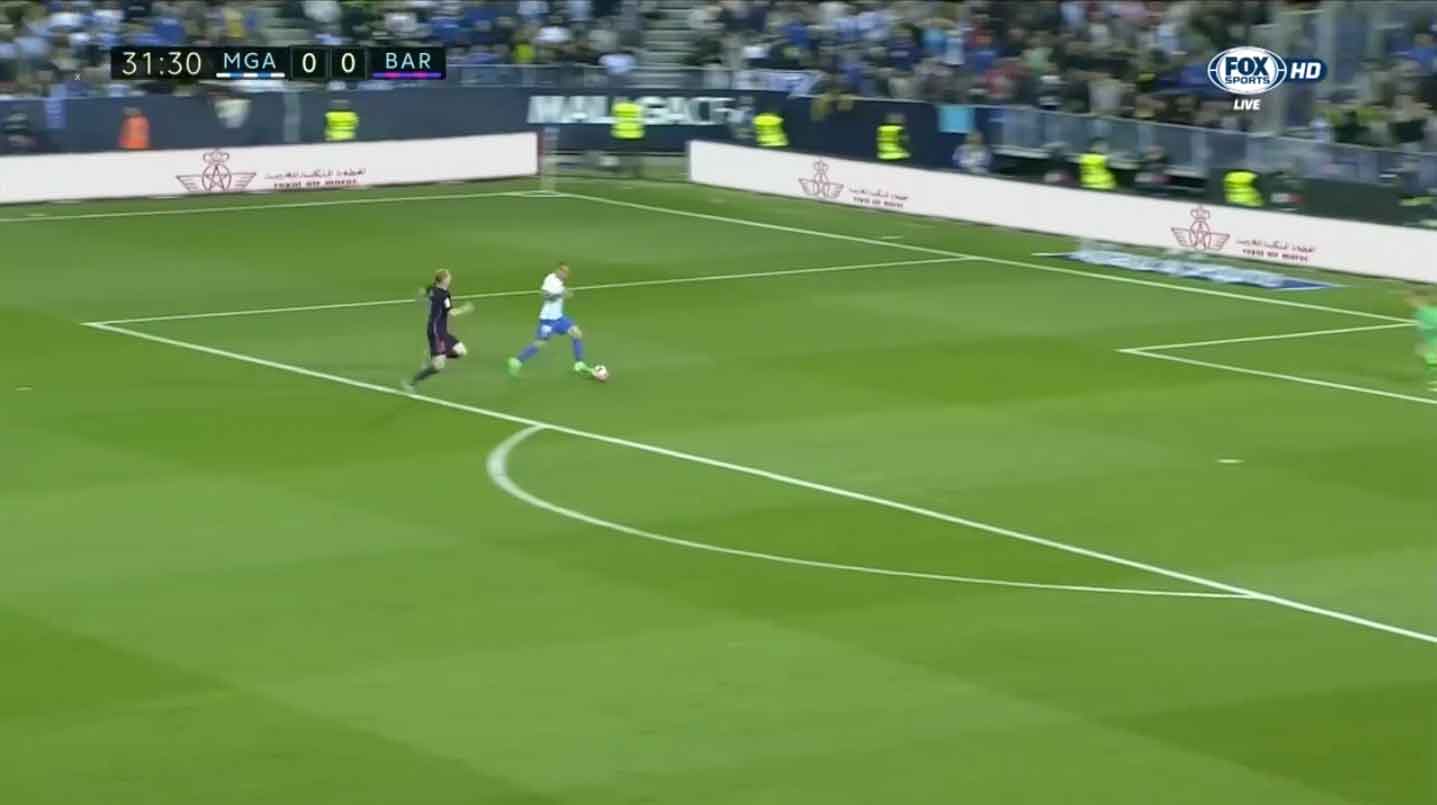 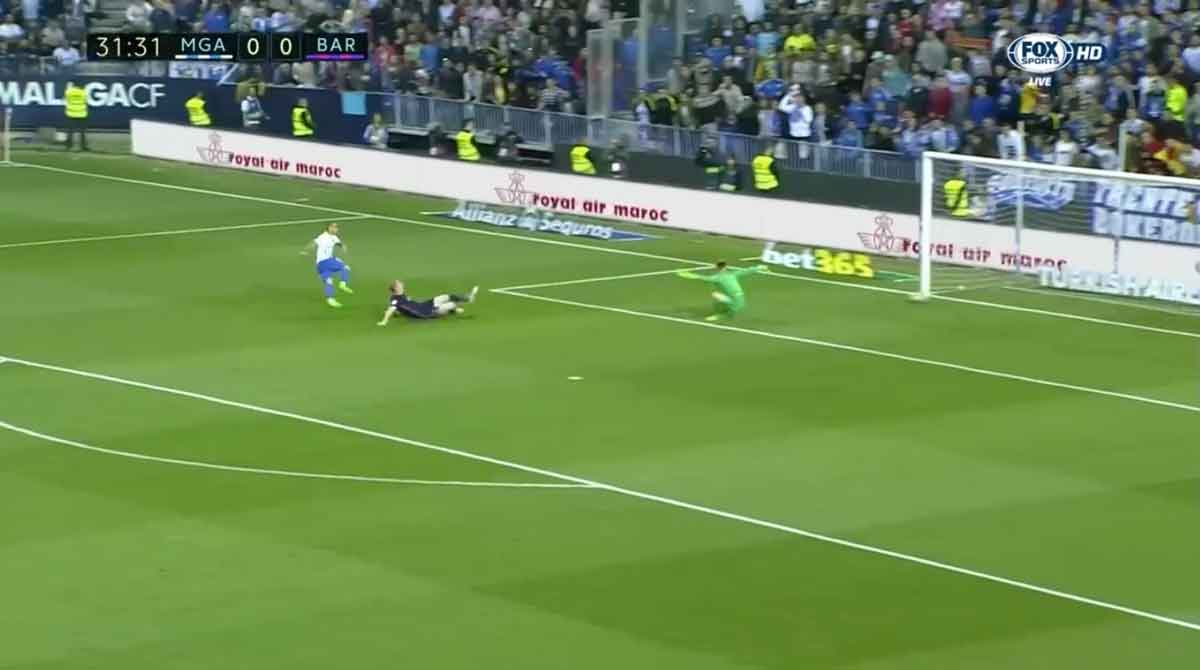 But it was his assist (below) for Jony’s match winner which was every bit as impressive. 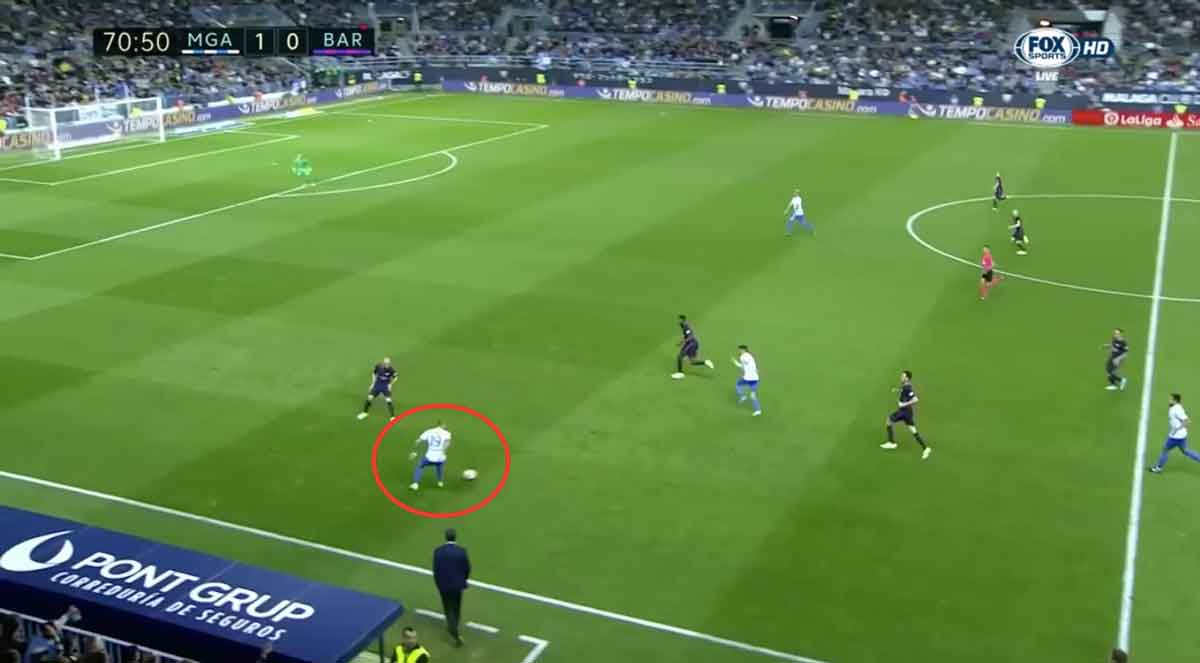 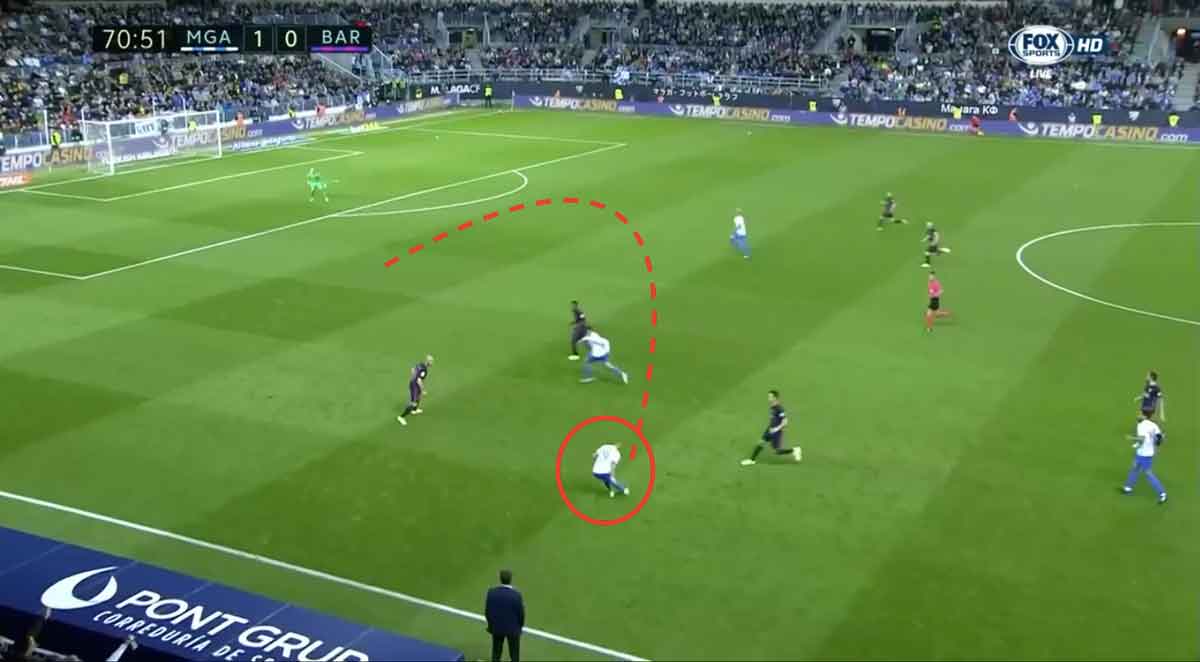 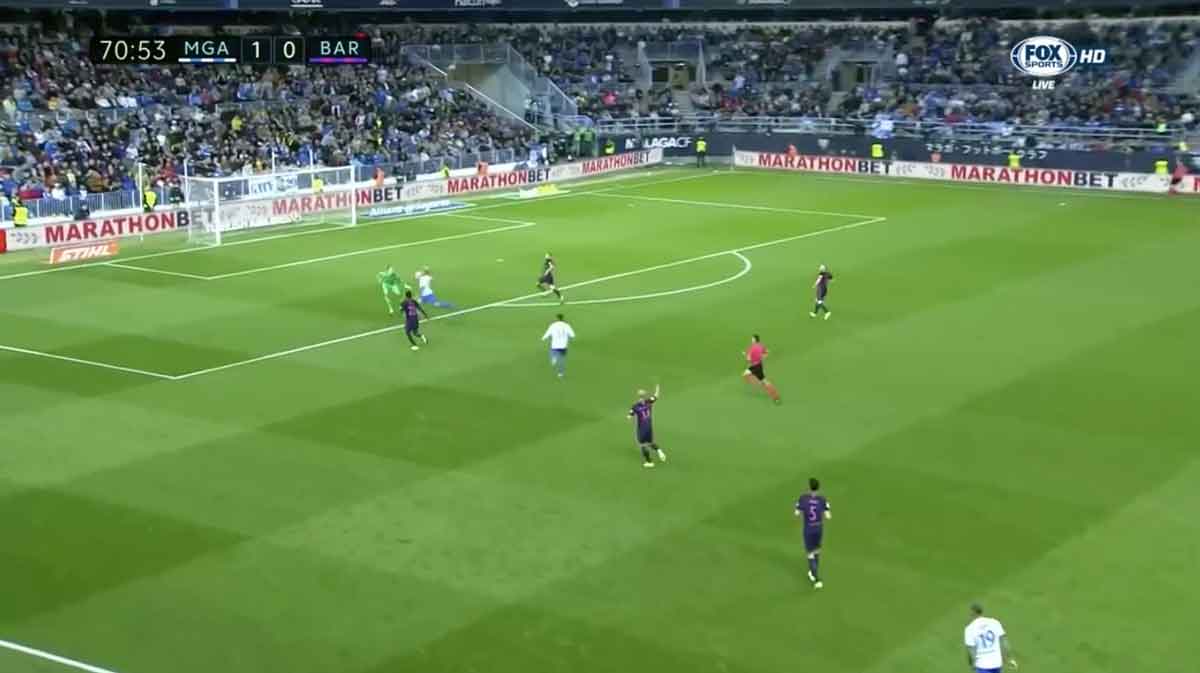 Sandro found himself with the ball on the left with Jony free in the middle.

Despite it being a pivotal moment in the match, he stayed calm, playing a cheeky lob over Samuel Umtiti into the space behind.

The ball was spot on and Jony was able to control it on his chest and take it past ter Stegen and fire into the empty net.

And it just summed up Sandro’s quality.

Put simply, he is too good for a team that finished 11th in La Liga.

Spanish journalist José Criado calls him their best player, writing in La Opinión de Málaga: “Sandro is like caviar, a luxury for a mid-table team like Málaga this season.”

And if you can get a luxury player for €6million (£5.25million), which is Sandro’s buyout clause, you've got a bargain indeed.