La Liga fans are used to watching left-footed wide forwards terrorise defenders on a regular basis. Their slaloming runs from the right side of the pitch. Their composure when inside the penalty area to work the ball back onto their favoured side before curling home an effort.

You just can’t stop the inevitable. Arjen Robben forged a career out of it. Lionel Messi isn’t half bad, either. And now Villarreal wonderkid Samuel Chukwueze has joined the party.

The 19-year-old impressed for the under-19 side and then the B team before he was quickly promoted to Javier Calleja’s squad.

Fast-tracked after an unstoppable performance against Athletic Bilbao, it was a showing which brought him to the attention of the masses and by November he’d made his debut for El Submarino Amarillo.

Villarreal have struggled this season – though they did reach the quarter-finals of the Europa League only to lose to La Liga rivals Valencia – and at one point relegation looked to be a real possibility. But Chukwueze has been the one standout throughout the campaign. And it hasn’t gone unnoticed.

According to reports in the Daily Mail, Liverpool and Manchester City are vying for his signature this summer. The Nigeria international has also previously been linked with Atlético Madrid, Leicester City and Bayern Munich.

Chukwueze reportedly has a £54million release clause in his deal. Though that is potentially a bargain down the line if he fulfils his potential, right now it could be considered a risk.

A number of wide forwards have arrived in the Premier League having impressed in Spain and failed to replicate their form in England. Nolito, Jesús Navas, José Antonio Reyes and, to an extent, even Pedro.

But, fortunately for the interested clubs, Chukwueze isn't your stereotypical La Liga winger. 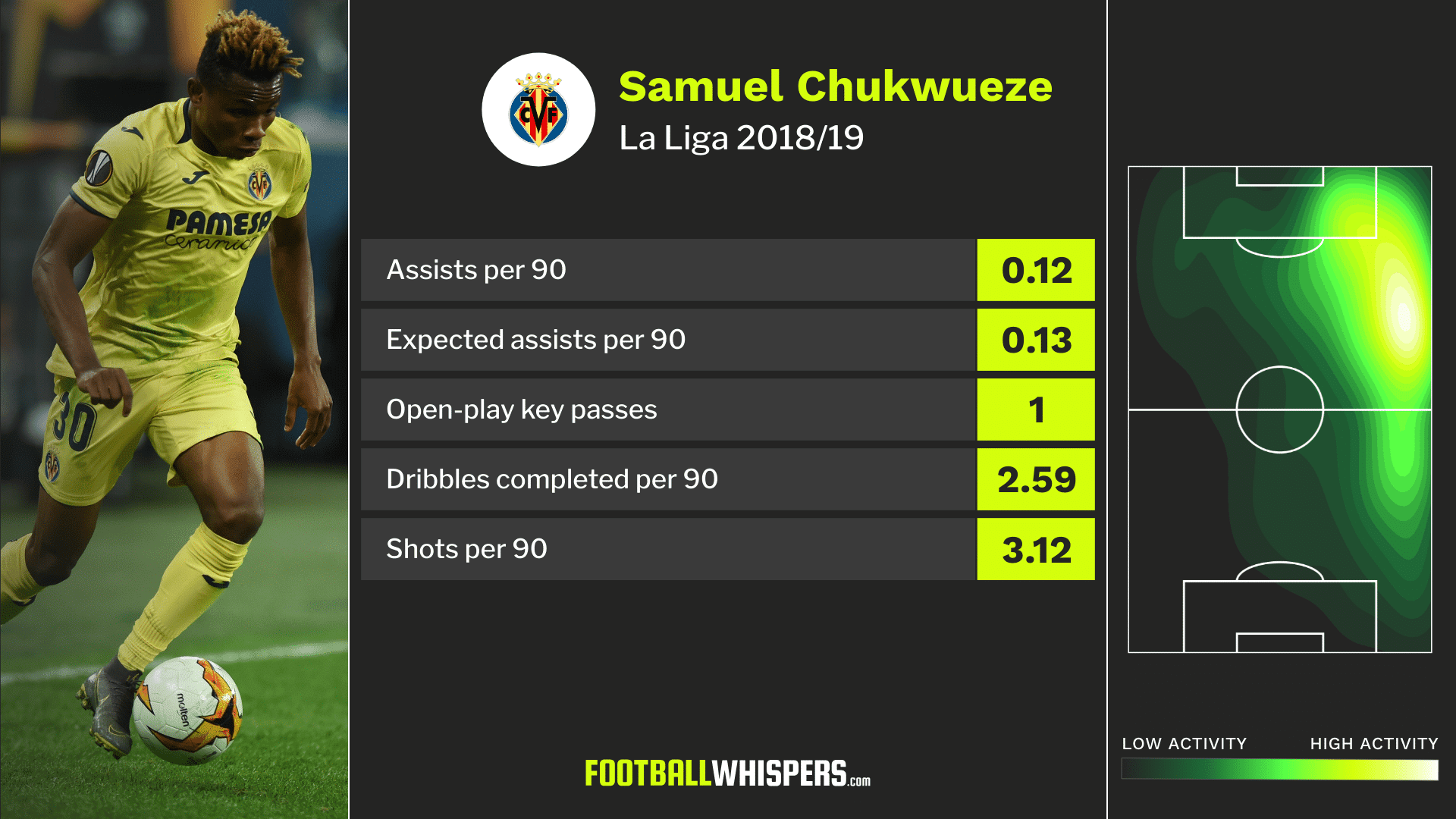 For starters, he's much more robust. He rides challenges and isn't easily bullied. He's a confident player and unlike many others, he doesn't solely rely on space to do the damage. It helps, undoubtedly, but he can beat men in tight areas and creates his own opportunities that way.

Navas, for example, needed space to attack to be at his very best. When he was smothered by the opposition he was nullified. The same thing can't be said for Chukwueze.

The 2.59 dribbles he completes on a per 90 minute basis puts him in the top ten for this stat in La Liga. He beats opponents on a regular basis and creates chaos on the right side of the pitch.

Though likened to Robben due to his nature to attack down the flank before cutting inside, he is confident on his right foot and this adds another dimension to his game. There's an unpredictability to his style and this makes him difficult to stop.

His assist numbers and expected assists aren't the greatest but the circumstances need to be taken into account. In a struggling team who rarely commit many men forward, his options are limited when he gets into the final third.

But that doesn't mean these numbers wouldn't jump if he was part of a better forward line. 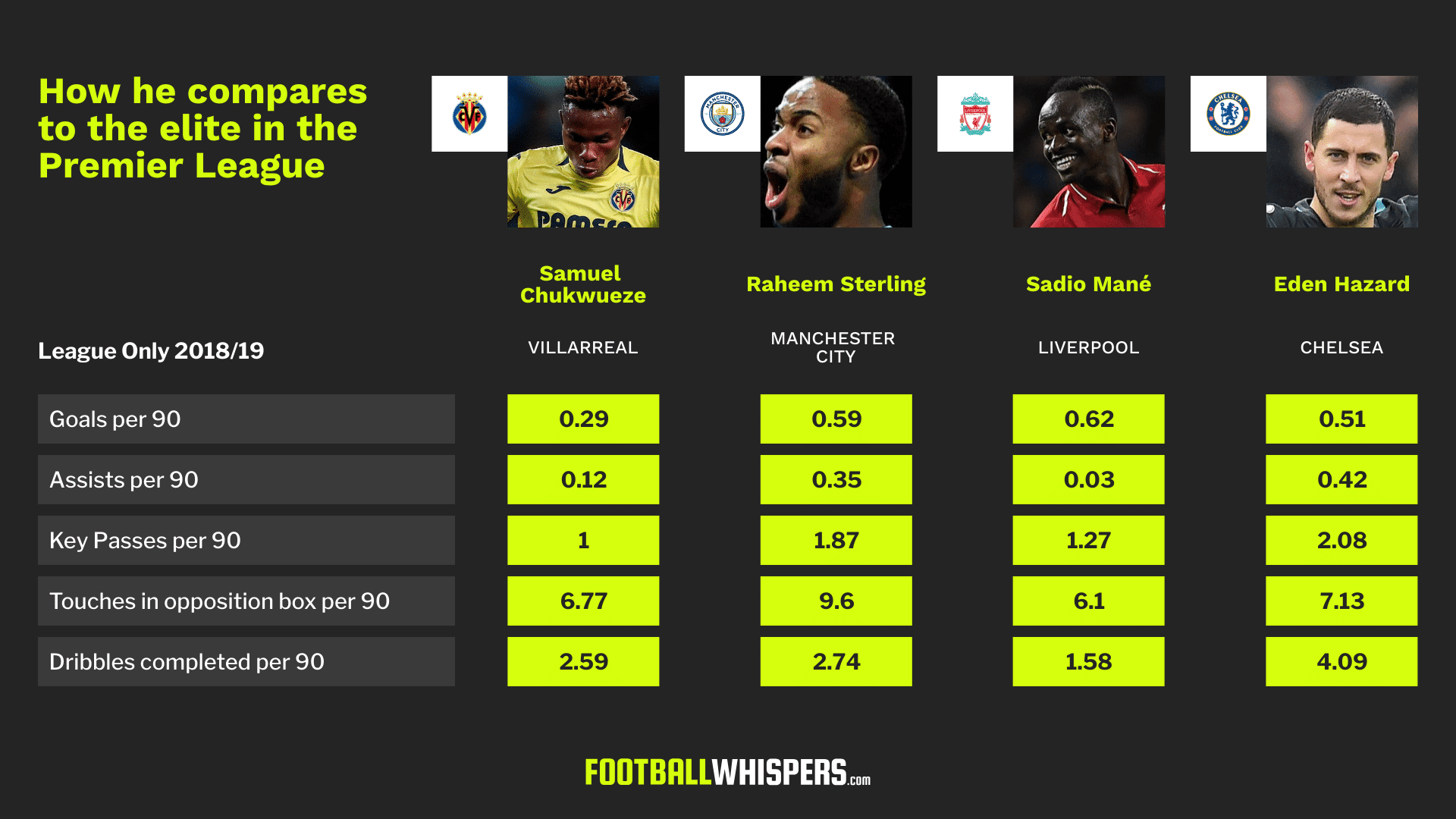 His 2018/19 season has been one to remember but it was never going to be comparable to the elite wide forwards currently plying their trade in the English top flight. But the comparison above gives you an idea of where he is right now.

His output in terms of goals and assists would need to improve but, as mentioned, this is likely to increase if positioned alongside better players. It'll be a similar story with key passes, too.

The positive to be taken, however, is he still averaging one key pass per 90 in a struggling Villarreal side. The vision is there and the execution of passes improves with more experience on the pitch.

The touches in the opposition's box is one to take a real interest in. Many wide forwards rarely hit the penalty area. Leon Bailey averages 4.56 touches in the box. Diogo Jota comes in with 4.9. The in-demand Nicolas Pépé averages 4.64.

The fact Chukwueze averages over six, playing for a team near the bottom of La Liga, more than Sadio Mané this season, shows a number of things.

He gets beyond the last man, a dying art in the modern game, he's calm and composed in the area which leads into an important point: he will eventually be a regular goalscorer. 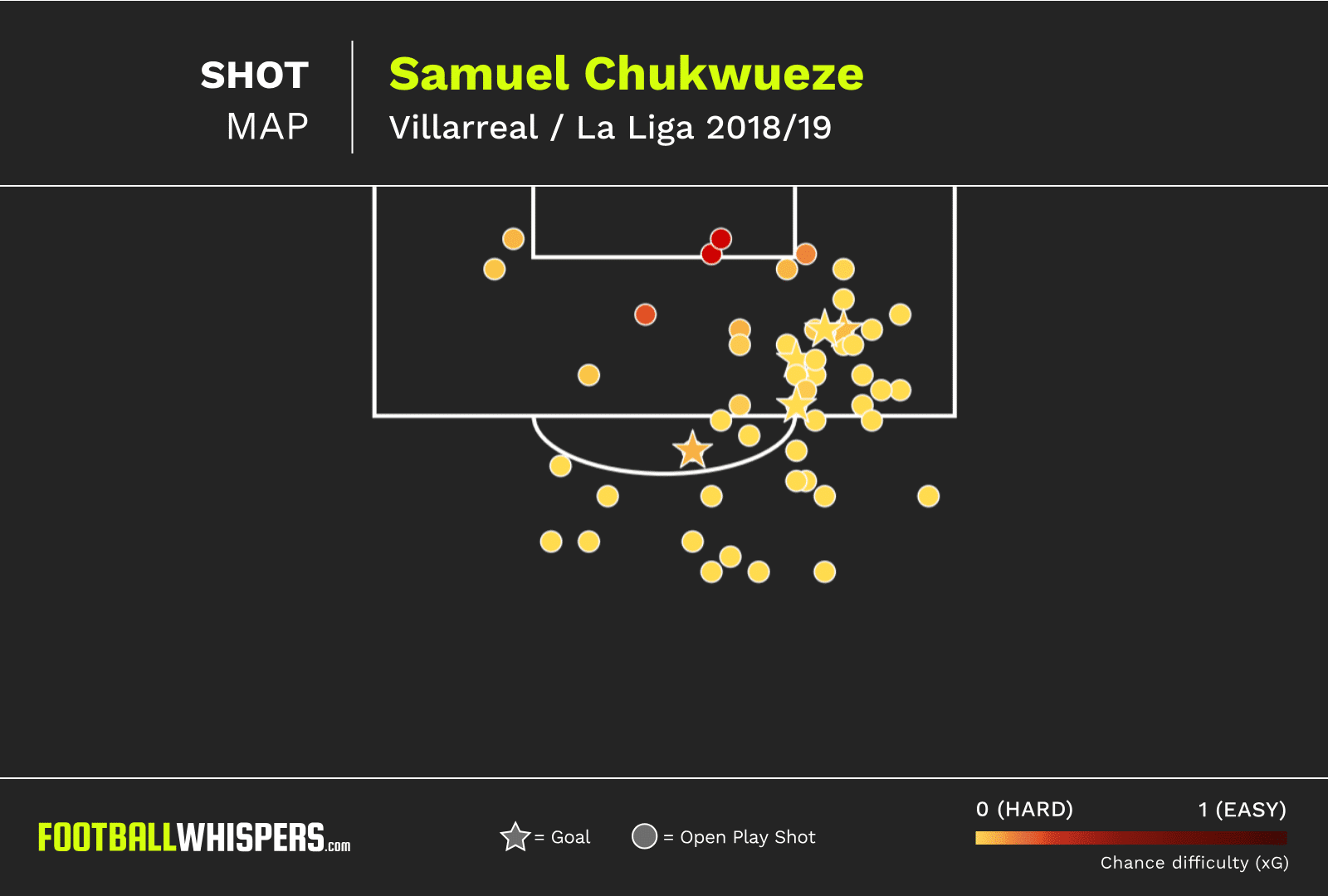 Chukwueze's shot map, shown above, suggests he's an intelligent player despite his young age. The temptation for many youngsters is to pick the ball up, carry it forward and then have a shot, even when not in the best of positions to do so.

But the teenager takes very few shots from outside the penalty area and is always looking to get into the box before unleashing an effort goalwards. The spread of shots could be better, with many clustered to the right of the area, but for a 19-year-old wide forward in a team fighting for survival to have this shot map is hugely encouraging.

Villarreal are a selling club and the £54million buyout is just a guide as to what they would potentially demand. But that isn't to say a deal couldn't be struck, with add-ons included, to see him move for less.

He's the perfect project for a Jürgen Klopp or a Pep Guardiola. A wide forward with all of the traits necessary to be a goalscoring sensation. Fluent in English already, that would quicken the adaption period and lessens the chance of him struggling.

In a grossly inflated transfer market, signing Chukwueze seems like a no-brainer for a Premier League club.