Manchester City fans were disappointed that Pep Guardiola failed to act in the January transfer window. None of the rumoured targets arrived at the Etihad and the fans were worried about their ability to push for that desired top four finish.

Performances from Gabriel Jesus have somewhat quelled those fears and an exciting, youthful attack, has reinvigorated Pep’s stance at the Etihad Stadium. Now, reports in the Norwegian press suggest that the Spanish coach was close to adding to his front line in January. 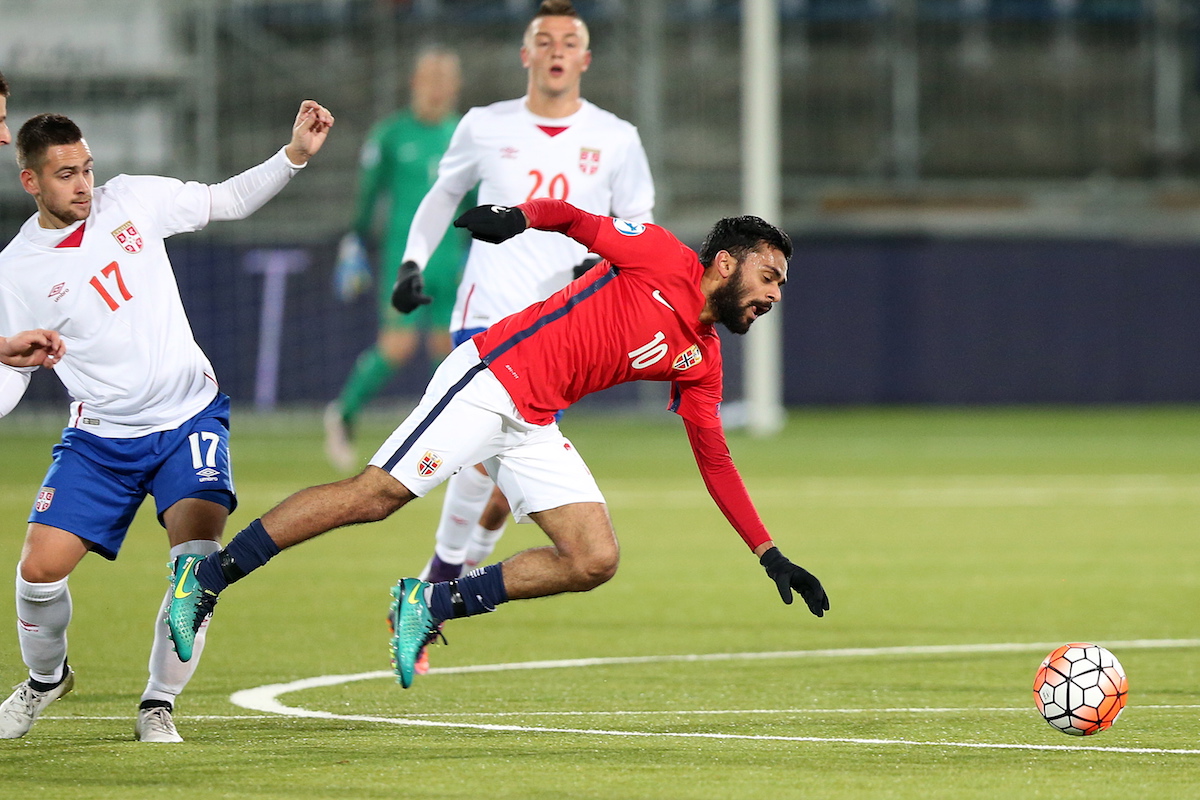 Norway Under-21 international Ghayas Zahid was apparently close to joining Manchester City from Vålerenga, but at the last minute, they decided not to make a move. The 22-year-old is a free agent in the summer and it is expected that they will go back in for the attacking midfielder.

Who is Ghayas Zahid?

Born in Oslo and of Pakistani descent Zahid had spells at Stabæk and Klemetsrud IF as a youth player but joined his current club in 2012. He made his first-team debut very quickly the same year and after impressing in the youth system and on loan at Ullensaker/Kisa he began to command a starting spot.

Zahid has now played 105 times for his club and has scored 26 times and added 21 assists. Able to play anywhere in the attack, he prefers to hang on the left-flank, but is a talented No.10 playmaker.

It is believed that the City are interested in signing the Norwegian, but then loan him out to one of their feeder club. He would fit very well at New York City FC under Patrick Vieira, before trying his hand at the Premier League.

“I must say that Manchester City has several clubs, so it was not just City,” Vålerenga coach – and former Celtic manager – Ronny Deila told local paper VG. “There is it very tough. We have had close contact with them throughout. The look at Ghayas as a development project.”

Instantly, when watching the midfielder, you get a sense that there is something of the extraordinary about him. Think of a Scandinavian Eden Hazard, with flashed of David Silva thrown in.

City travelled to La Manga to watch the 22-year-old play in a friendly against Zenit St-Petersburg at the end of January, but he only played for 45 minutes – hitting the crossbar with a penalty.

“I don’t think it had any contributory cause, but they chose to change their mind after the game,” Zahid told VG.

Many will be sceptical of the ability of a younger player, performing well in the Norwegian top division, being able to cut at in the Premier League, but although against limited opposition, Zahid does catch the eye.

Always dropping into little pockets of space, he doesn’t dwell on the ball. Using quick one-touch passes, he turns and drives, looking to move the ball on as quick as possible.

Playing against Odds BK, Zahid, as you can see from the graphic below, takes up a dangerous position in between five defenders. 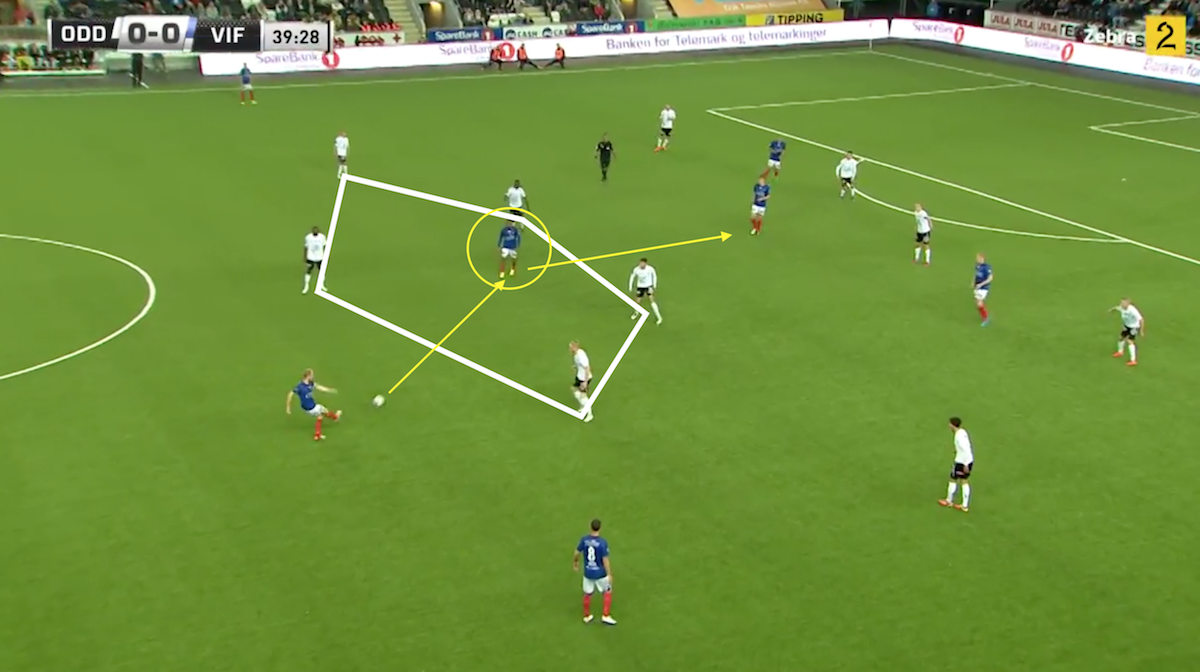 Receiving the ball to feet, without taking a touch, he turns the pass towards the centre-forward. Then, he spins around his marker looking to get the ball back. 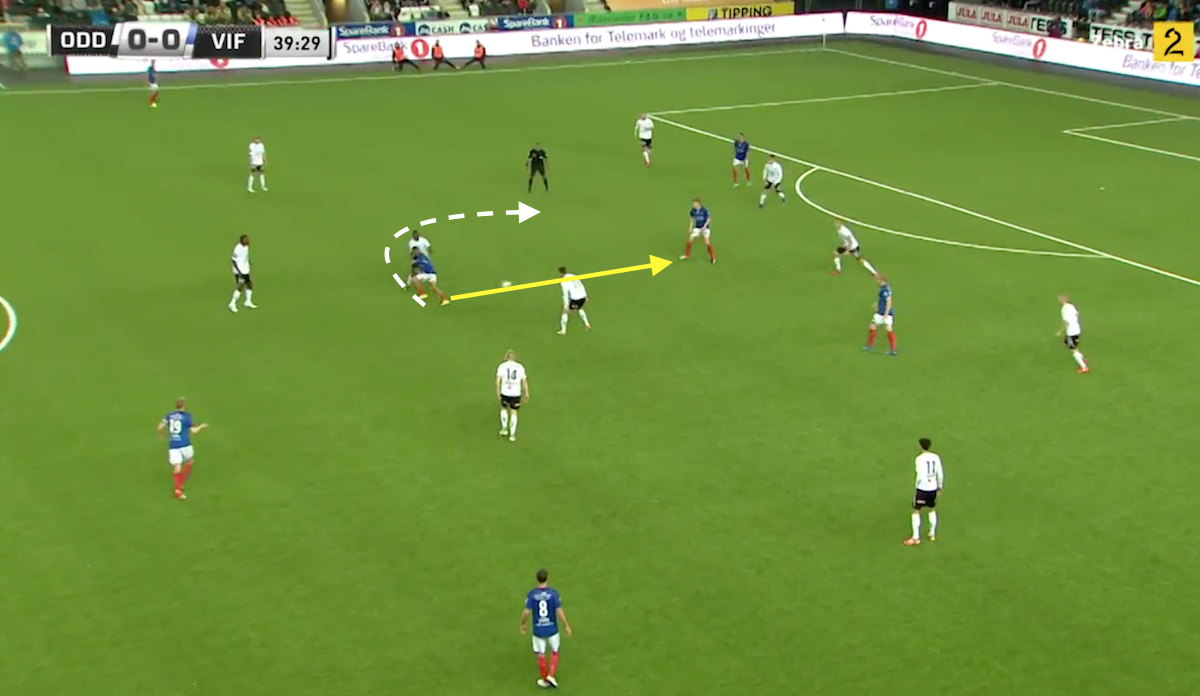 Once in possession, he instantly spots the runner out wide and he then makes a bee-line for the penalty area. 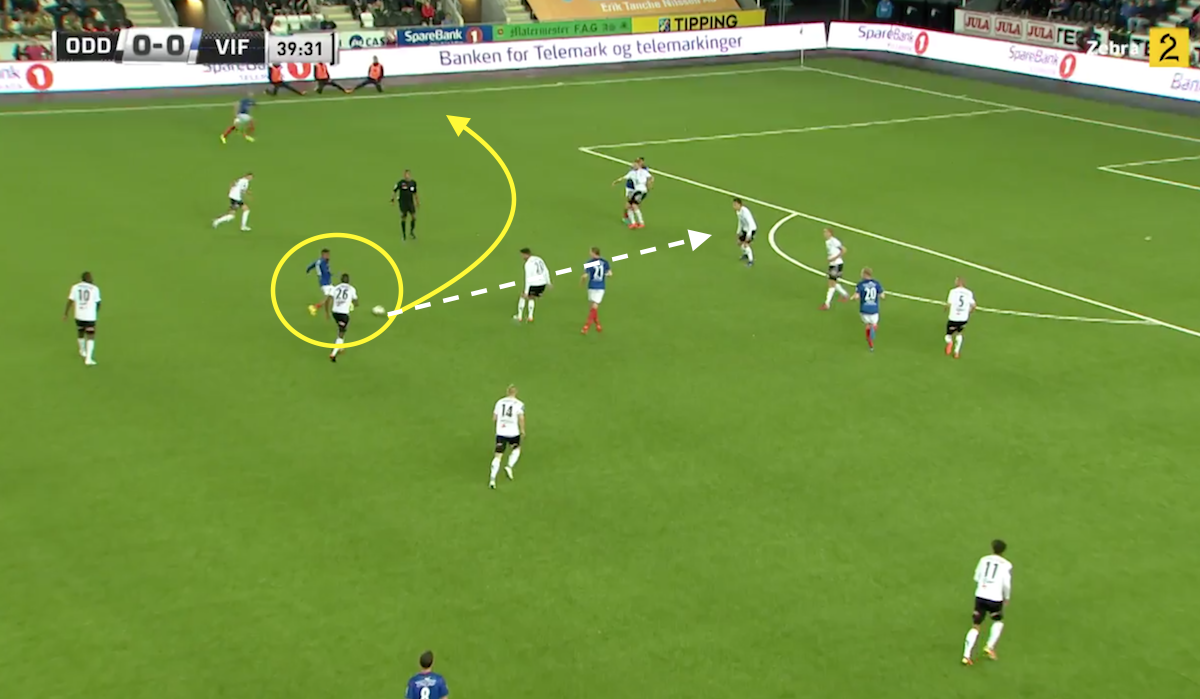 It shows that the midfielder has great technique, excellent vision and an unselfishness to keep his head up and look to develop the attack.

Like players in the Eden Hazard/Riyad Mahrez role, there is an element of greed to his game. When he plays on the left, he loves to get the ball and cut inside. More often than not he’ll fashion a yard of space to have a shot on goal.

Zahid is comfortable on both feet, can pick a pass and find the back of the net just as much with his left or his right. As well arriving at the back post for a header, he has that uncanny, Paul Scholes-esque ability to arrive in the box at the opportune moment.

So many of his goals this season have come just as he arrives at the penalty spot to add the finish.

Vision That Appeals to City

What also stands out about his play is his vision. It’s one thing to be able to dribble past inferior opponents and constantly fire shots at goal, but that sense of picking out a run, finding a team-mate that other players would see, that’s what makes you special.

That happened against Aalesunds FK. The little midfielder picks up the ball in the No.10 position and as you can see from the graphic below, everything about the way his team-mates are running and his body shape suggests he’s going to play a little dink cross over the defence. 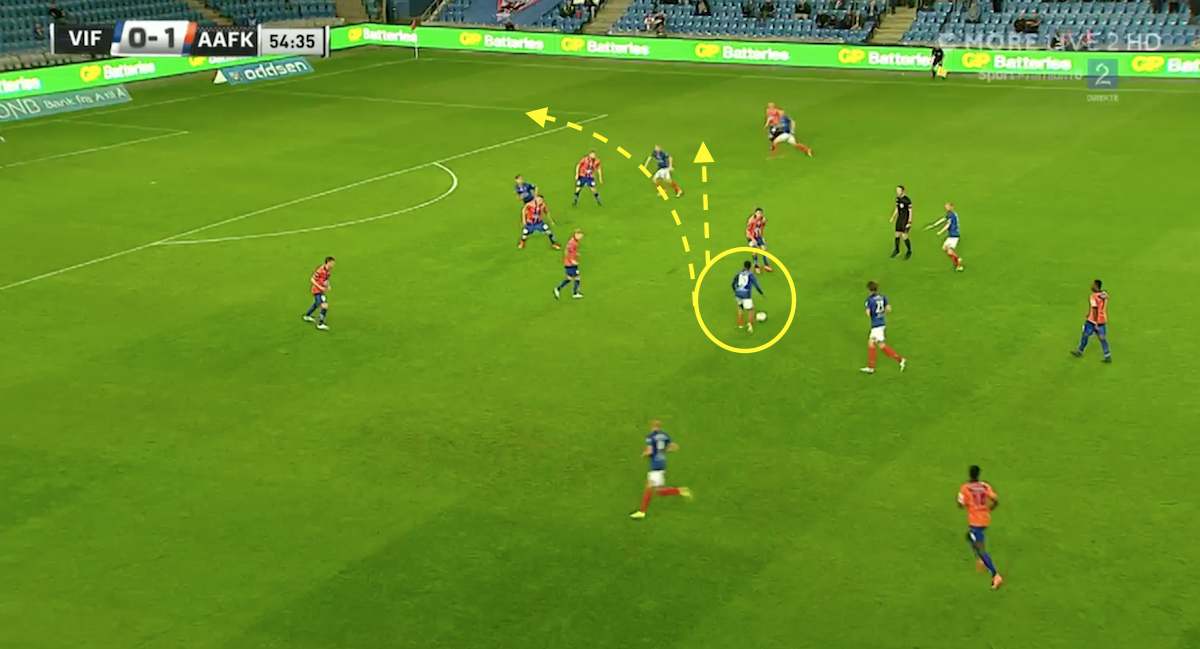 However, Zahid thinks outside the box. The striker makes a run across the back four and the midfielder slips a lovely weighted ball in between the defence and is only inches from reaching the toe of the forward. 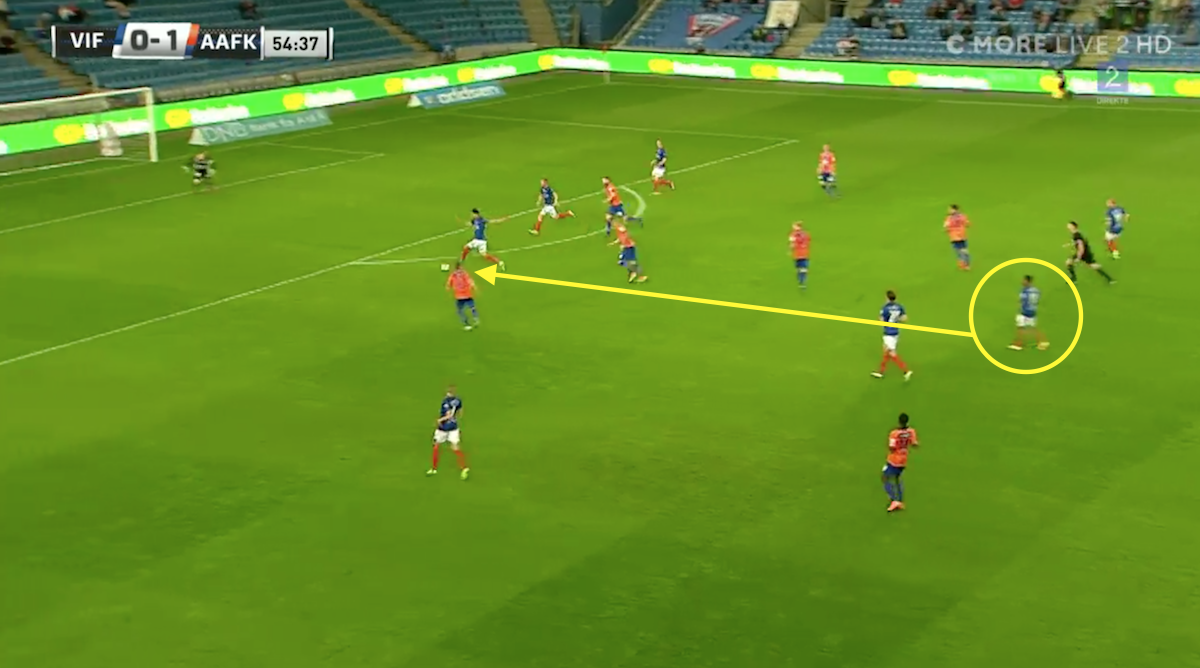 There are a few examples of similar moments when Zahid makes the pass you don’t see coming. That’s is something that Silva has done so well for City and an attribute you could imagine working incredibly well with Leroy Sane, Kevin De Bruyne and Jesus.

Faster than the Spaniard on the ball, Zahid is also stockier and stronger whilst holding off defenders. Those physical features would cope well under the pressures of the Premier League.

He still has a lot to learn. When exactly to give up the ball and to reduce the amount of pointless shots from distance. However, that can be partly down to him being a level above the other players.

You also don’t want to give him the ball near your own penalty area. He will often try too much, looking to beat players when a simple pass would be the better choice. That would be quickly worked out of his game though.

Without seeing him against English opposition, it’s hard to know if he has the level to step straight into City’s squad, but he doesn’t lack in any attacking area when watching him domestically or at Under-21 level.

Available on a free in the summer, a spell in MLS would assess him at a higher level, ready for a chance to shine in England in 12 months’ time. Whether it’s at a club like Huddersfield Town, similar to Aaron Mooy’s loan deal, or to let him loose amongst City’s young exciting attack.

Zahid’s style, vision and ability would sit well with the exceptional forwards gelling under Guardiola’s eye. If City do make the move to sign the Norwegian in the summer, it looks like – especially on a free – they have uncovered a gem of a midfielder.