“I have never had any contact with Mourinho,” said Youri Tielemans. “Everyone claiming different is lying. I have the utmost respect for mister Mourinho and many other coaches. But he never called me.”

There had been rumours claiming quite the contrary but last summer he was adamant, vehement, strenuous in his denial. There was no pre-season phone call from the new Manchester United manager, José Mourinho who has, since, admitted he is a fan of the teenager.

Given his hugely impressive showing over the course of this season, however, Tielemans will have a difficult time convincing people that he has not been receiving phone calls from Mourinho, Mauricio Pochettino, Pep Guardiola, Leonardo Jardim, Massimiliano Allegri, Arsène Wenger – or any other top manager at a top club, for that matter – this summer.

The soon-to-be-20-year-old Belgium international's progress has gone on a sharp, upward trajectory this campaign and he is a seriously wanted man as a result.

With many of Europe's top clubs – the latest being Manchester City – set to go to war for his signature, just who is this youngster anyway? 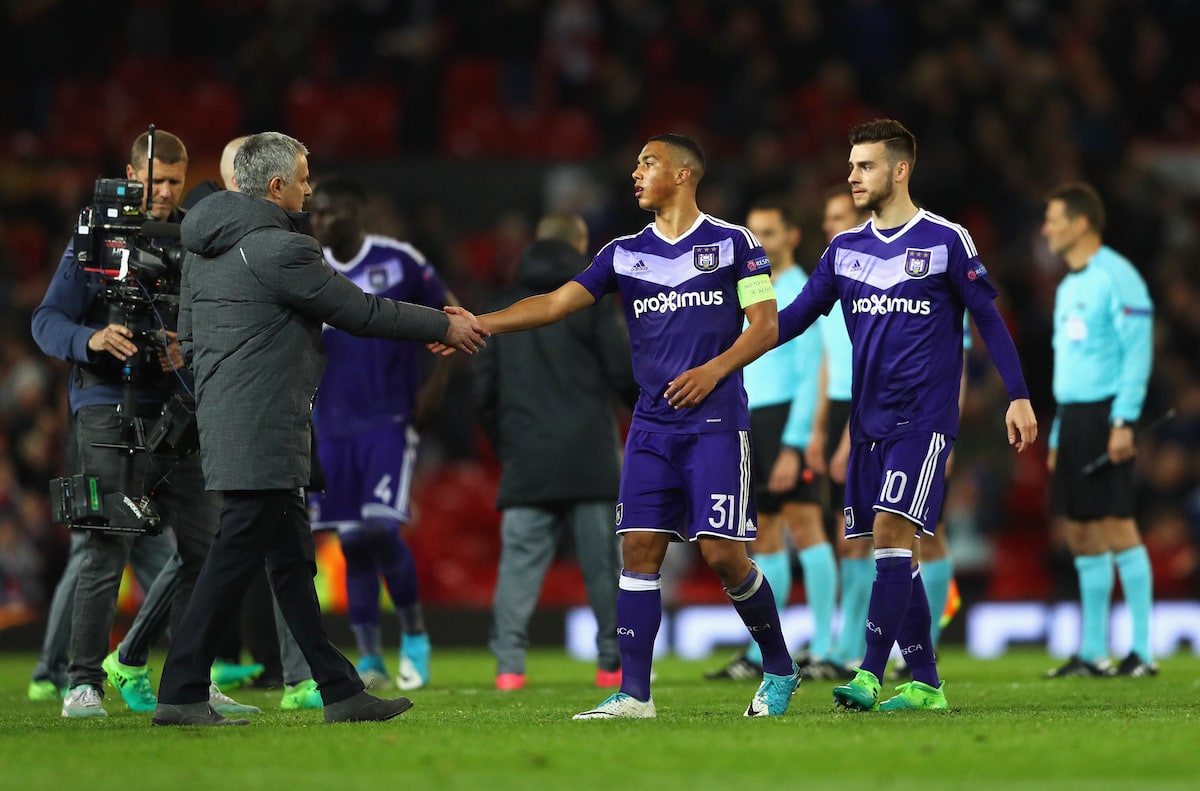 Born to a Belgian father and a mother with Congolese roots in Sint-Pieters-Leeuw, not far from the town of his current club, Anderlecht, Tielemans has been with the club since he was five years old, and he worked his way through the youth ranks playing in the No.10 role.

Evidently he was head and shoulders above the rest, youth football had become too easy for him, because on July 28, 2013, two months after he turned just 16, he was given his first-team debut in a league game against Lokeren, making him Belgium's fourth-youngest top-flight debutant.

Mere months later, on October 2, aged 16 years and 148 days, he became the youngest Belgian and the third-youngest player ever to play in the UEFA Champions League when he started for Anderlecht at home to Olympiacos, a game and an experience that ultimately proved to be bitter-sweet, as he suffered a crushing 3-0 defeat.

Everton have bid €25m for Anderlecht's Youri Tielemans, although AS Monaco are leading the race for the player. (Source: Sport/Foot) pic.twitter.com/oBLUo2KX1B

He went on to win the Young Footballer of the Year and the Belgian Talent of the Year awards that season. The following campaign saw him retain the former as well as scoop the gong for Belgium's most promising newcomer.

Far from a newcomer now, Tielemans has established himself as a key cog in Anderlecht's well-oiled machine. He has made close to 180 appearances for the Purple & Whites, scoring 35 goals and providing 30 assists.

Such has been his influence and progression this season, more than half of those goals (18) have come in the current campaign as well as almost half of those assists (14). He is also now his club's main penalty taker, which has padded his goal tally, and he has also skippered the team.

Additionally, he is a full international after working his way through Belgium's youth ranks. He was called up to the senior Belgium squad back in June 2015 for a UEFA Euro 2016 qualifier against Wales before, on November 9th, 2016, being given his debut in a 1-1 draw with Netherlands. To date, he has three caps.

READ MORE: GUARDIOLA SHOULD NOT BE JUDGED AGAINST PELLEGRINI

Tielemans has identified the great Zinédine Zidane as his idol but he has drawn comparisons to Chelsea legend Frank Lampard. The head of Anderlecht's youth department meanwhile, Jean Kindermans, has likened Tielemans to his fellow Belgium international team-mate, Axel Witsel.

Tielemans is a central midfielder these days. But when he broke into the Anderlecht first team, then-manager Besnik Hasi deployed him as a holding midfielder. 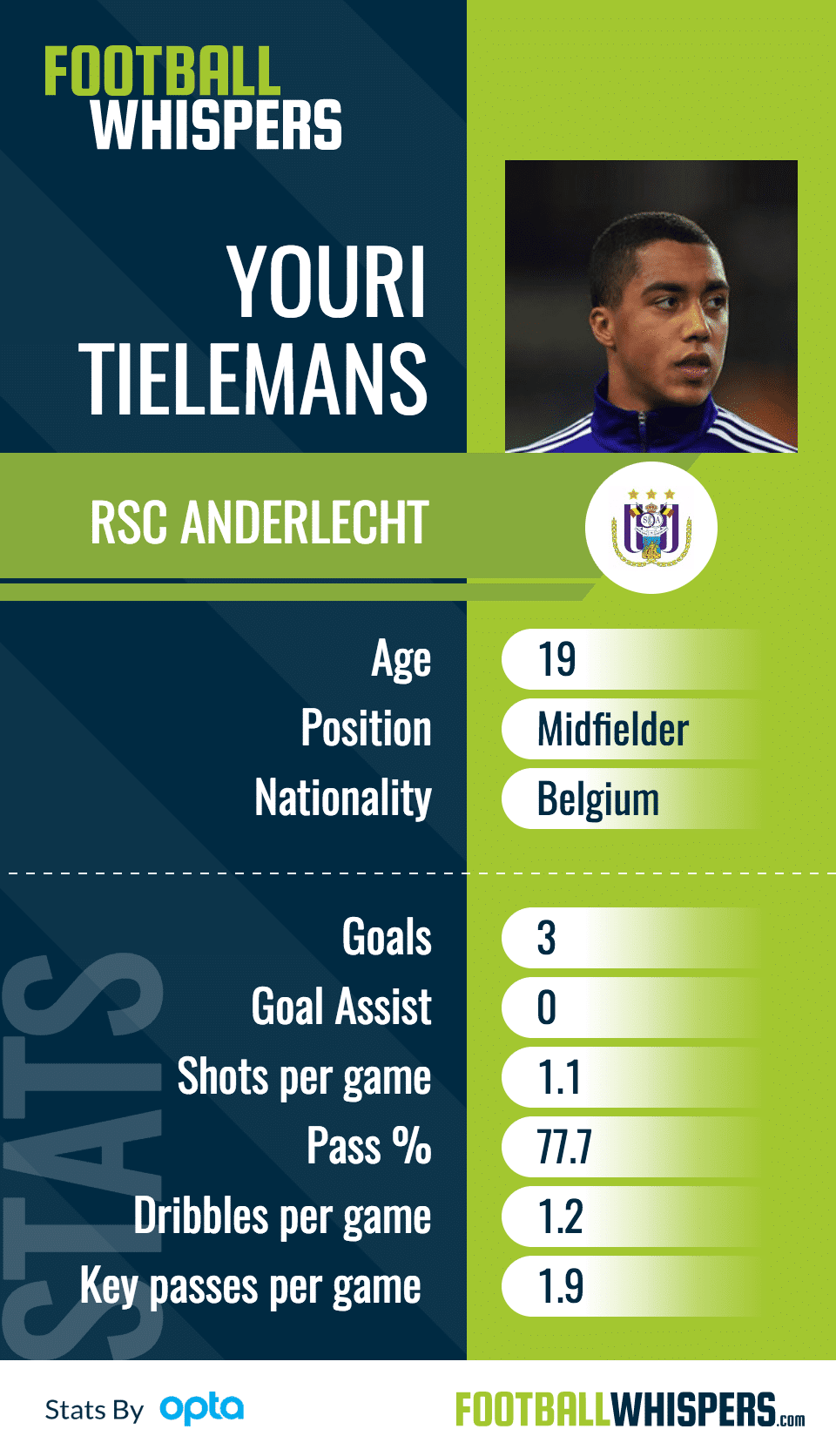 *Stats for Europa League only.

It was his speed, the excellent timing of his forward runs, his broad passing range and his ability to shoot from long range with either his left foot or his natural right foot, as proven by the growing collection of sensational goals scored, that prompted his move further up the pitch to a position from where he could inflict more damage on the opposition. “It's perfect,” he said about that tactical tweak. “I always played as a No.10 in the youth teams.”

This season he has developed quite a fine partnership in central midfield with Leander Dendoncker, another very highly rated young player.

With Anderlecht bossing league games, Dendoncker has been key to their controlling of possession. Either by dropping between the centre-backs to collect the ball and starting attacking moves by playing the ball into the feet of those around him or pinging it wide to the full-backs galloping forward or the wingers positioned higher up.

That allows Tielemans to venture forward into space, where he eventually collects the ball and either works an opening for a frightening long range attempt or plays a killer pass for a team-mate. 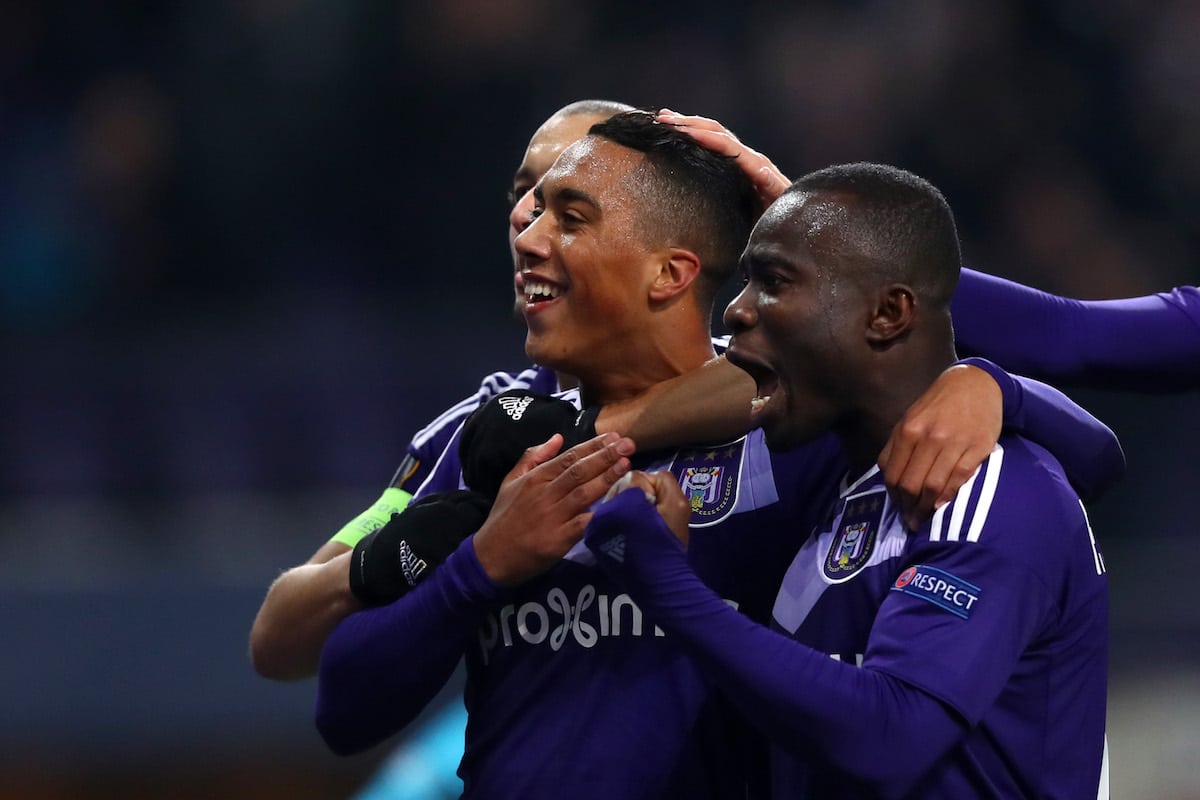 He has just the one weakness and he is fully aware of it.

“I have to improve my fitness in the hope I can move to a bigger league in the future,” Tielemans admits. “I enjoy making quality passes – I like attractive football – but I know I have to work harder sometimes.”

This is not a weakness to be taken lightly, as a lack of fitness can see him become a liability in midfield. Stronger and more illustrious competitions require committed defensive effort which means a certain level of fitness is paramount.

While Tielemans can and does provide game-defining moments going forward, he needs to put more work in defensively to ensure that in a tougher league, on a bigger stage, he won't be found wanting when his team is put on the back foot – something he admittedly is not too accustomed to given Anderlecht dominate the Belgian Jupiler League. 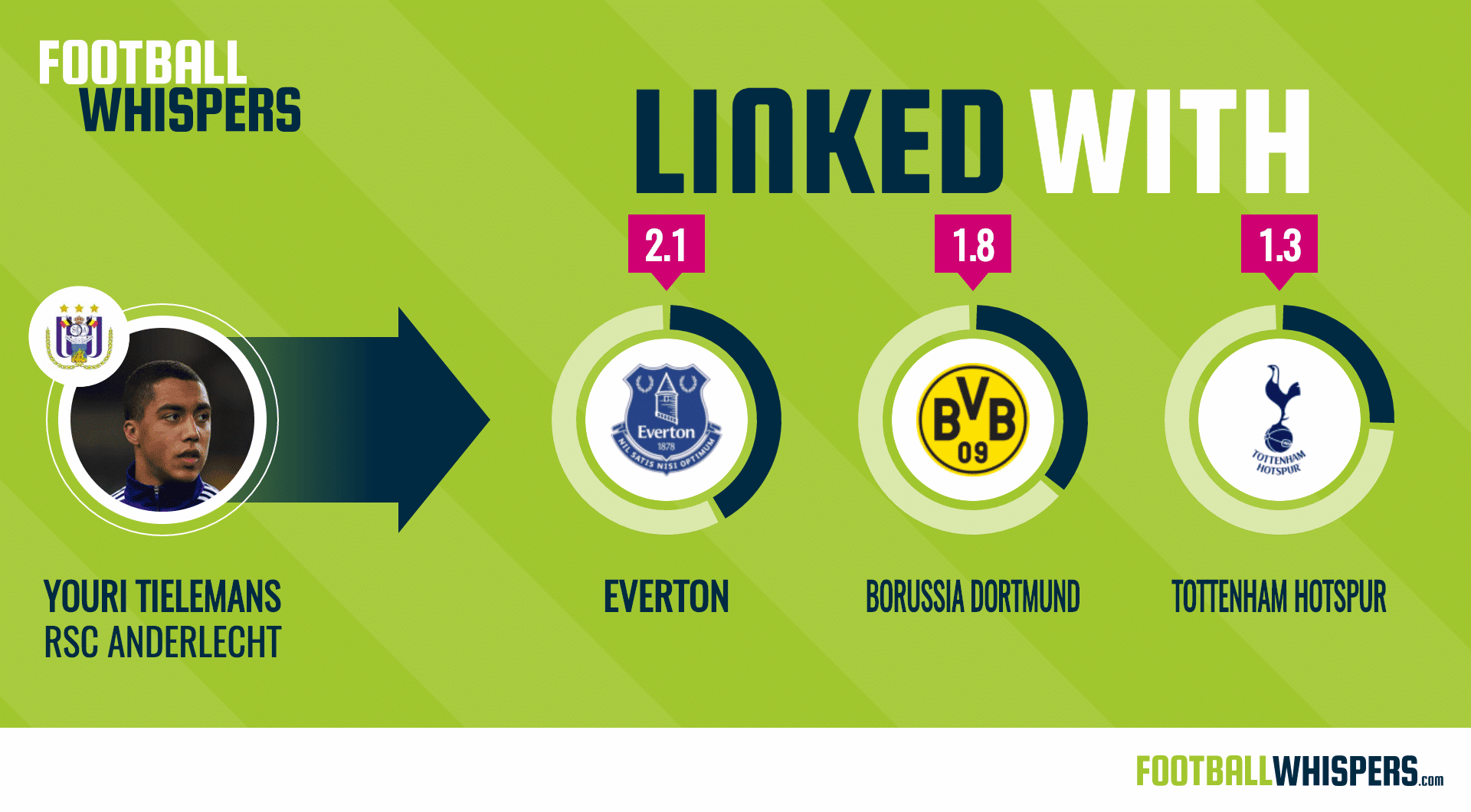 Where could he go?

Tielemans has been linked to pretty much every top club on the continent. But recently the likes of Tottenham Hotspur, Manchester City, Everton, and Monaco have been especially mentioned.

Playing style, strengths, and weaknesses all considered, a move to Monaco makes the most sense. The French club has taken Ligue 1 and the Champions League by storm with their vibrant, attacking approach to playing the game, a style that would appeal to Tielemans.

Leonardo Jardim has also shown himself more than willing to put faith in youth, something the fairytale rise of 18-year-old Kylian Mbappé – among others – highlights.

Also in the young Belgian's favour is the fact that Monaco look set to lose at least one of their main central midfielders, with France international Tiemoué Bakayoko a Chelsea transfer target. Manchester United have also been heavily linked. On top of that, first-team football with Monaco should be easier to come by.

The league itself should not be hard to adapt to, as it is not nearly as physically demanding as the Premier League. Given he needs to improve his fitness, a move to Manchester City, Everton and especially Spurs, who are renowned for their high intensity style, would mean he would require time to get himself up to the fitness levels required.

It is imperative that he makes the right call. Too often talented youngsters who have the world at their feet make poor career choices and suffer as a result. Some never find their way back.

“Like Marc [Degryse] says, it's good to avoid ending up on the bench,” said Tielemans, in recognition of the former Belgium forward's advice to move to a smaller club.

Whether he heeds that advice will depend on who comes calling this summer. It might prove harder to resist the overtures of a European power in reality.