Liverpool’s prolonged search for a left-back appears to have taken them to Portugal. Just days after reports emerged to suggest the Reds had reignited their interest in Porto playmaker Rúben Neves, they are now being linked with his teammate Rafa Soares.

Up to now, Liverpool's attempts to bring in a player to put makeshift left-back James Milner's position in the first-team under threat have been thwarted for various reasons.

Fulham wonderkid Ryan Sessegnon topped the list of Liverpool transfer targets according to initial reports but fresh ones revealed the 18-year-old wasn't committed to a move up north and Jürgen Klopp pulled the plug on the deal.

Hull City pair Andrew Robertson and Josh Tymon were also linked with moves to Anfield but now, according to various media outlets, appear to be heading elsewhere. The Reds also missed out on Leicester City's Ben Chilwell last summer.

However, with Alberto Moreno set to depart this summer it's safe to assume a left-back will arrive.

The 22-year-old Porto full-back revealed the Merseyside club's interest in him during a recent interview with Omnisport.

“I know I’ve been followed by English clubs especially after our campaign,” said Soares.

“Liverpool are a great club and to be linked is an enormous honour for me. I followed Liverpool from a young age and I shiver every time I listen to You’ll Never Walk Alone, it’s unique!

“Liverpool are famous and popular in Portugal where people value the history of a club. I’m naturally flattered, but I’m a Porto player and focused on succeeding here.”

What Could Liverpool Expect From Soares?

It will come as a surprise to hear this with many young full-backs in the modern game being overly aggressive in their style of play, but Soares is fairly balanced.

Many full-backs aged 25 and under are sometimes considered to be reckless due to the fact they can, at times, neglect the defensive aspect of their game.

The Porto man doesn't have this problem. During his time on loan at Rio Ave, he showcased a maturity to his game. He supported the attack but it wasn't to the detriment of the defence.

He's composed on the ball, a must for all Liverpool defenders, but what really separates him from others is his pass selection. When possible, he doesn't just aimlessly punt the ball into the penalty area. He looks to make the most out of the opportunities he's presented with. In fact, one of his strengths is his delivery.

Soares would jump between measured first time passes, pull-backs after getting to the byline and wicked driven crosses across the face of goal. All found their targets on a regular basis.

Rio Ave played a 4-2-3-1 formation, different to Liverpool's 4-3-3 system they operated in under Klopp last season. However, one similarity is both teams instructed their left-winger to tuck inside. It meant the left-back was often isolated and expected to keep the width and his use of the ball had to be precise.

He can be devastating from a wide area but he's also a natural when in central positions. He's comfortable on the overlap as well as the underlap, and he doesn't need to get chalk on his boots to be effective.

So how does Soares stack up when compared to Liverpool's current incumbent? 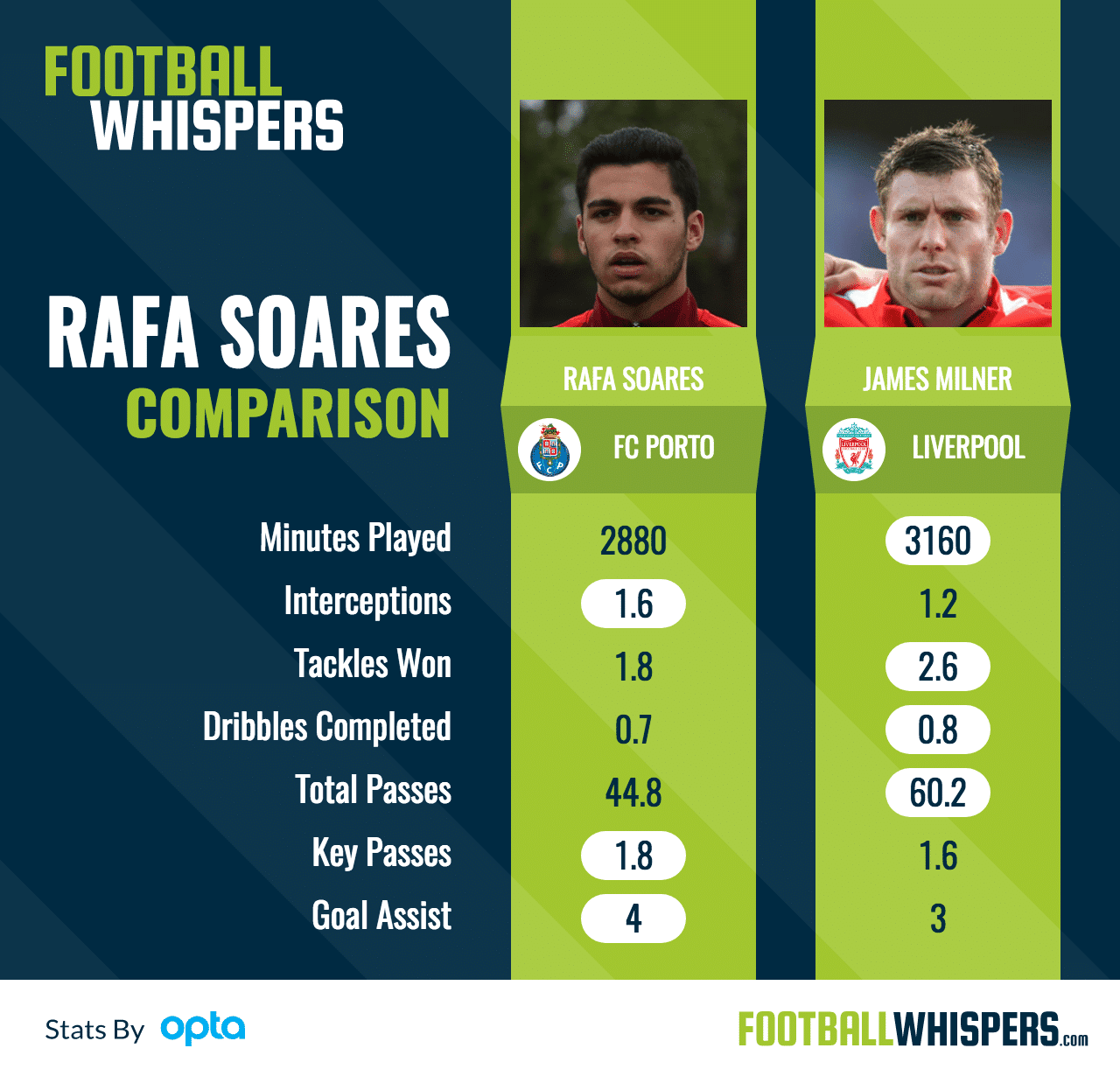 The Portuguese full-back made more interceptions than Milner and made fewer tackles. As Italian legend Paolo Maldini once said: “If I have to make a tackle then I have already made a mistake.” The fewer tackles from a defender, the better.

Soares finished up with one more assist than the former Leeds United midfielder and averaged the 0.2 more key passes per 90 minutes. That's despite attempting 15 passes fewer than the Liverpool left-back per match.

If he did move to Anfield then that would be one area to keep an eye on. He would see more of the ball and this could go one of two ways. The 22-year-old could thrive with more possession or his lack of ability on the ball could be exposed. For example, the more of the ball Nathaniel Clyne sees the worse he looks.

Liverpool full-backs need to be confident on the ball, they need to be incisive with their passes and brave with their choices. Soares appears to tick these three boxes but until he's playing in red, in front of a huge Anfield crowd with increased pressure, it's risky to judge on just how well he'd adapt.

In the same interview with Omnisport, the player revealed his love for Porto and how he is looking forward to playing under new manager Sérgio Conceição.

“I keep my feet on the ground and focus on climbing my way up one step at a time. Fans support and trust me to become a symbol of the club, as I have been here for over 10 years and feel Porto in my bones.

“”In 2015/16 it was rumoured Conceição wanted me to join him in Vitoria Guimaraes – where he was coach at the time – which may mean he trusts and believes in me.”

It's clear he values the trust of his coaches and one thing that may swing it for Liverpool if they did make a formal approach is Pepijn Lijnders. The highly-rated Dutchman was a revelation at Porto having coached at various levels over the seven years he was in Portugal. He would have worked with Soares and could sell the Liverpool project to him.

At €15million, his rumoured release clause in his current deal, he could be a bargain for Klopp and the recruitment team.