Attackers are no longer judged solely on their ability to put the ball in the back of the net. The game has evolved and the demands on these players have changed. Adapt or perish.

Nowadays those tasked with scoring goals also have to be diligent in their defensive duties. Not only that, they also have to create opportunities for team-mates.

Some of the top scorers across Europe this season the are same players leading the way for assists. Neymar all managed to hit double figures in both goals and assists. They're a threat in general and, at times, their creativity aids the team more than their goals do.

Every team is looking for the next big thing and though these youngsters, inconsistent by their nature, might not have finished the year with a high number of assists their totals per 90 paint a picture of creative threats.

With this in mind, we've decided to take a look at the players aged 21 and under with the most assists per 90 this season across Europe's top five leagues. 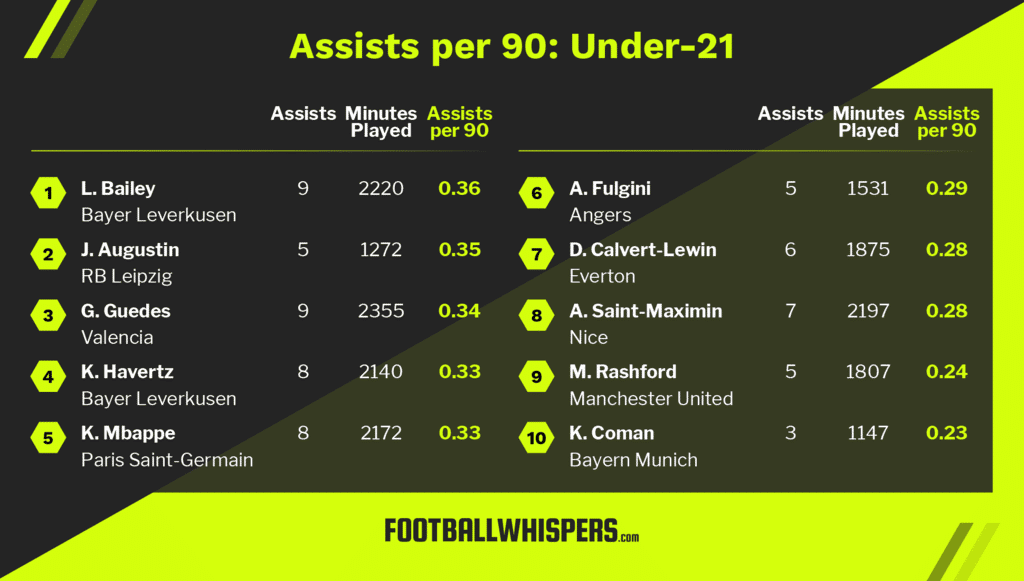 Chelsea, Manchester City and Liverpool transfer target  Leon Bailey tops the list with 0.36 assists per 90 minutes. The Bayer Leverkusen winger had his most productive season to date adding nine assists to the nine goals he managed.

Jean-Kévin Augustin, a revelation since his move to RB Leipzig, assisted team-mates at a rate of 0.35 per 90 minutes. He was involved in just shy of a goal every game when combining this stat with his goals per 90 record of 0.63.

Arsenal is a potential destination for Gonçalo Guedes according to reports but Valencia are keen to keep the on-loan PSG forward and it's easy to understand why. Making the most of the first-team minutes, the Portuguese forward has chipped in with 0.34 assists per 90.

Kai Havertz, Kylian Mbappé, Marcus Rashford and Kingsley Coman are all names expected to be found on these lists. The quartet have, after all, starred for some of the best teams in Europe this season.

Ones that aren't at the forefront of people's minds when thinking of creative youngsters are Angelo Fulgini, Dominic Calvert-Lewin and Allan Saint-Maximin.

Fulgini has impressed for Angers this term helping them away from a potential relegation battle. The 21-year-old is someone who could be on the move this summer. Calvert-Lewin showed his versatility by playing a number of roles for Everton. He wasn't playing in the most potent side but still managed to assist 0.28 goals per 90 minutes.

Monaco shocked plenty of people last summer when they allowed Saint-Maximin to join rivals Nice. The 21-year-old has taken advantage of the extended opportunity in the first-team grabbing 0.28 assists per 90 this term in Ligue 1.

Ousmane Dembélé and Jadon Sancho both would have appeared on the list if there wasn't a 1,000 minute limit added. In fact, the Barcelona star would have topped it having managed to assist 0.61 goals per 90 minutes while the Borussia Dortmund attacker, who joined the club to replace Dembélé, ranks second with 0.52.

Can both maintain such an output if they played more matches? They're players to keep an eye on next season.