Resilience: it's one of the greatest characteristics any player or team can possess, upon which title triumphs are built and individual accolades awarded.

Through the Premier League era, it was perhaps the defining trait of Sir Alex Ferguson's dominant Manchester United sides, known for their propensity to keep their focus in the dying embers of games to snatch a result which seemed lost.

But what of the ability to lead from the front? Surely there is value in putting your best foot forward from the off and asserting superiority as soon as possible?

Plenty of attention is paid to players who appear to have the magic quality of coming up with the goods late in the day, scoring, assisting or, conversely, making a crucial tackle or save right at the death.

Rarely is a light shone on the individuals who fly out of the blocks and seek to put their opponents to the sword at the earliest possible stage, however. That's what were are aiming to do here.

By looking at performances across the 2017/18 Premier League season for the first 15 minutes of matches alone, we can get a picture of which players are effective from the first whistle.

The results are interesting, too. While some of the division's big guns appear to save their best for last, warming into matches as they progress, some unexpected individuals stand out. 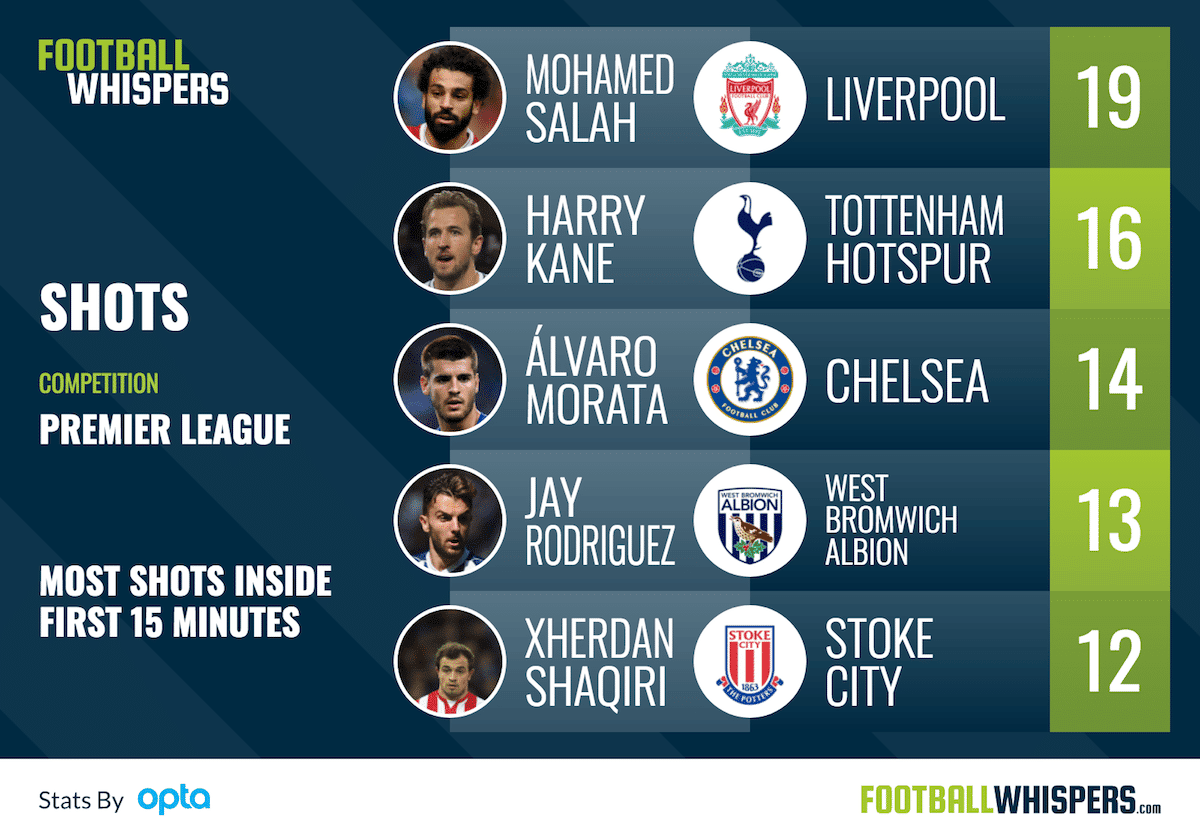 The above graphic shows the top five Premier League players when it comes to shots taken inside the opening 15 minutes of matches this season. The top two, Mohamed Salah and Harry Kane, who are the league's joint-highest scorers on 24 goals apiece, are unsurprising standouts.

Jay Rodriguez and Xherdan Shaqiri, however, who play for strugglers West Bromwich Albion and Stoke City respectively, are unexpected high-rankers. This perhaps evidences an ability for the Potters and the Baggies to catch superior opponents napping early on, aiming for goal quickly after kick off before their team's qualitative disadvantage takes hold.

It is also interesting to note that, while Salah ranks highly for total shots, his accuracy early on in games is low, with only four of his 19 efforts landing on target inside the first 15 minutes.

This gives Liverpool‘s prolific Egyptian a shot accuracy of just 21.05 per cent for this specific juncture of games, some way below his overall accuracy of 42.10 per cent.

By contrast, Kane is actually more accurate early in games, hitting the target with 50 per cent of his efforts in the first 15 minutes, compared to 41.36 per cent overall.

The Tottenham Hotspur striker is also the most regular scorer inside the first quarter of an hour, finding the net three times so far this season. However, Brighton & Hove Albion‘s in-form striker Glenn Murray and, surprisingly, Manchester United right-back Antonio Valencia both match Kane's three-goal return.

Indeed, what is especially unique about Valencia's return inside the first 15 minutes of his appearances is that his three goals account for his total tally for the season. 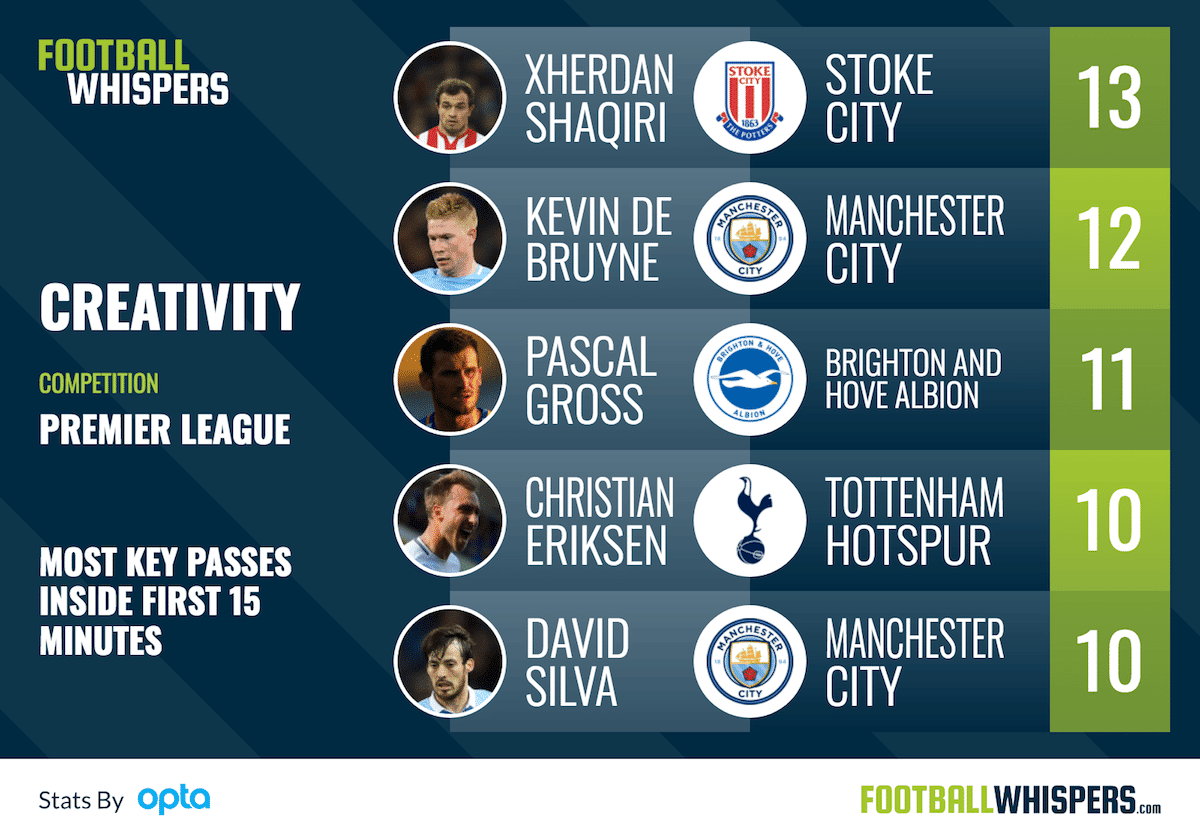 Barring rare moments of individual brilliance and monumental defensive lapses, these early goals are only possible with switched-on creative players on hand to conjure the necessary scoring opportunities.

Once again, Stoke's Shaqiri figures highly, topping the chart when it comes to key passes completed inside the first 15 minutes with 15, one more than Manchester City‘s Kevin De Bruyne, the Premier League's assists leader.

This again seems to point to the tenacious Swiss international's ability to start quickly and catch opponents off guard, with his 15 chance-creating passes accounting for 23.44 per cent of his overall total.

Eden Hazard has completed more dribbles than any player in the Premier League this season (128), and the same is true when isolating the opening 15 minutes of matches, in which he has breezed passed his marker 25 times, followed by Rajiv van La Parra (18) and Leroy Sané (16). 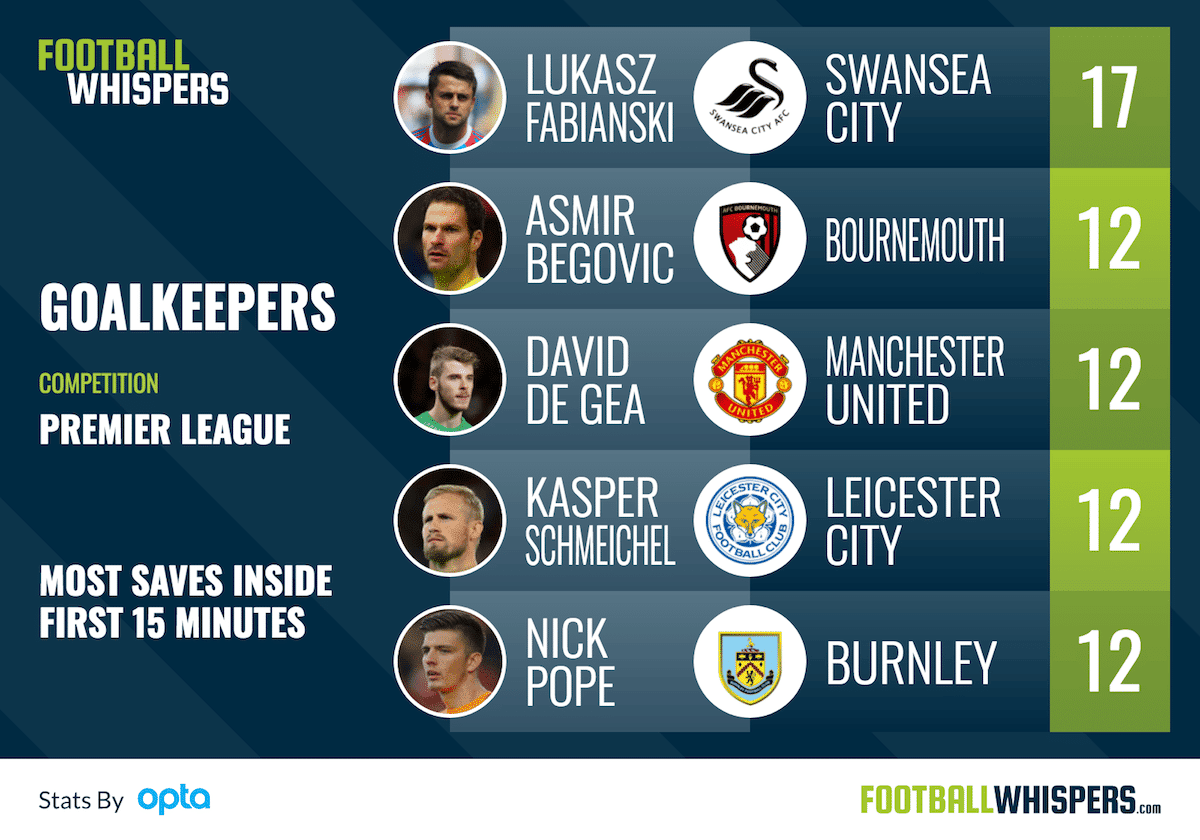 Swansea City‘s Łukasz Fabiański is the busiest goalkeeper in the early running, forced into 17 saves so far this term. And, unlike the others inside the top five, most of the efforts the Polish shot-stopper faces during this period come from inside the penalty area, with 12 shots against the Swans taken from within 18 yards.

It seems early tackle frequency is the preserve of the combative midfield player, with Wilfred Ndidi (22), Idrissa Gueye (20) and N'Golo Kanté (17) top dogs in terms of tackling inside 15 minutes.

While starting as you mean to go on is always a good idea, early goals alone count for little unless concentration and effort is maintained throughout 90 minutes.

Arsenal, for instance, have scored more goals inside the first 15 minutes than any other Premier League side (nine), yet sit sixth, cut adrift of the race for Champions League qualification.