With Manchester City having all but wrapped up the Premier League title, the intense battle for a top-four finish, fought by Manchester United, Tottenham Hotspur, Chelsea, Liverpool and Arsenal, draws most of the focus.

But beyond the division's established elite, a logjam has formed. From seventh position all the way down to 17th, 11 sides are separated by just nine points, with six teams standing a genuine chance of claiming a seventh-place finish, thus effectively becoming the Premier League's ‘best of the rest'.

Sean Dyche's Burnley have defied critics and confounded analysts all season, spending more time in seventh than any other side. But, lately, the Clarets' form has dipped while others have improved.

We've taken a look at the underlying performance statistics of the teams competing to be crowned the best outside of the top six to find out who has the strongest claim to being the Premier League's seventh-best side.

While Burnley currently occupy seventh place, as they have for much of the season, many of their stats do not reflect their lofty, somewhat unexpected standing.

No team in the league has faced more shots that Burnley, with the Turf Moor club allowing 16 efforts on their goal per game on average this season. Their expected goals against (xGA) for this season of 38.4 suggests they should have conceded more than the 24 goals they have shipped.

In attack, Burnley have an expected goals (xG) total for the season so far of just 19.12, the lowest in the league, with their actual goals scored record of 21 from 27 games ranking joint-18th with relegation threatened West Bromwich Albion.

Burnley's rise to seventh, then, seems to be built on their ability to outperform their expected defensive numbers, boasting a better record at the back than the numbers behind the chances they allow would have us believe. This could be a result of a defensive set-up that does things xG metrics are not able to detect, such as the way Dyche's side focus on filtering opponent's shooting opportunities into unfavourable position and getting bodies between ball and goal to make black, rather then trying to prevent shooting opportunities altogether. Or they might have simply been lucky to date.

Sustaining their position over a long period while continuing to defy the stats would point to the former being true, but Burnley's recent dip in form, winless in their last six games with four losses in that time, suggests a regression to the mean as the sample size increases, thus giving credence to the latter, less flattering theory.

So, if not Burnley, then who? If the team currently in seventh are not actually the seventh-best team in the league, who is?

Crystal Palace, who appeared doomed to relegation earlier in the season, actually have some of the strongest underlying numbers outside the top six.

The Eagles's total xG for the season so far is 39.73, far outstripping their actual goals return of 25 and ranking them seventh in the division, while the total xGA of 38.67 shows they have perhaps been a touch unfortunate to have conceded 42 times.

Even when Palace were rooted to the bottom of the table, without a goal to their name, earlier in the campaign, their ‘expected' stats were still strong, ranking them comfortably in the top half at the time.

The club's hierarchy panicked and sacked manager Frank de Boer after just four games, replacing him with Roy Hodgson, who eventually brought results in line with their otherwise good performances. But Palace's consistently strong numbers show their stark downturn was a result of an inability to take the chances they were creating and simple bad luck; despite their dire straits, a reversal in fortunes was always on the cards.

In fact, Palace are the only team outside the top six with a positive expected goals difference (+1.06). 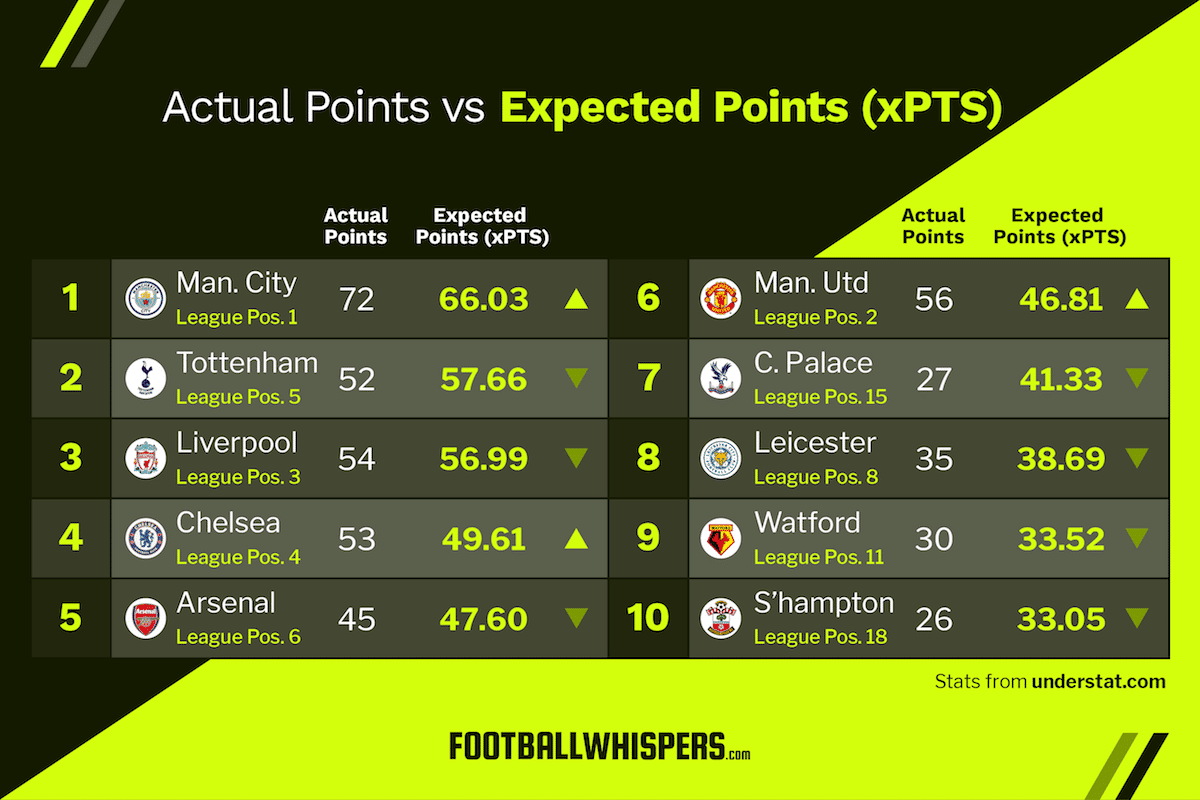 After an initial run of seven defeats in a row, with only one win from their first 11 games, Palace have now lost just three times in their last 16 Premier League outings. But, nine points and eight places behind Burnley with 11 games to play, the Eagles will struggle to finish in the position many of their underlying statistics suggest they should occupy.

As the above graphic shows, Watford figure inside the top half when it comes to expected points, and they are currently only six points behind Burnley in 11th. But the Hornets have been an inconsistent beast of late, with their strong early-season form accounting for much of their high standing in the expected numbers.

Bournemouth are one place above Watford in the table at the moment, occupying the final top-ten spot. But Eddie Howe's men are closer to the relegation zone than seventh place, and they rank 17th when it comes to both xGA (43.38) and xPTS (26.32).

And while Everton are ninth in the division at present, just two points off seventh, their underlying numbers are weak, ranking 14th for xPTS (29.59) and second from bottom for xGA (44.42).

Leicester City, on the other hand, are within striking distance of seventh. As things stand, the Foxes are just one point and one league position behind Burnley, while outperforming the Clarets in most metrics.

Claude Puel's men have endured a difficult run of results lately, picking up one win from their last five, overturned by champions elect Manchester City 5-1 last time out. But Leicester have the eighth-best expected goals difference in the division (-1.39) and rank eighth for xPTS (38.69).

Burnley's ascent to seventh, even climbing briefly into the top six at one point, has been one of the stories of the season. But is seems Sean Dyche's men have a real fight in their hands to stay there; FiveThirtyEight‘s Premier League predictor model has Leicester pipping them to seventh.

There are encouraging signs for Palace, too, whose statistics largely point towards them being the Premier League's seventh-best side. With a little more luck and an improvement in front of goal, Roy Hodgson's men should be able to look forward to a more comfortable 2018/19 season.