Tottenham Hotspur travel to Cyprus in the Champions League this week where they will face off against APOEL Nicosia, who despite being a regular name in UEFA competitions, still provide a relatively unknown threat when compared with the more familiar clubs in the content wide club tournaments.

As is the case with many teams from smaller nations who manage to break into the group stages of European competition, APOEL dominate their domestic league, and have been crowned champions for the past five seasons.

Local rivals Omonia, who are the second most successful team in the country behind APOEL, haven’t won the title since 2010 and Spurs' opponents have now won 26 Cypriot titles — six more than their Nicosia neighbours.

The club have to travel the long way around the qualifiers in order to reach the group stages of the competition and, starting at the second round of qualifying, they have had to navigate ties against FC Viitorul of Romania, Luxembourg’s F91 Dudelange, and Czech side Slavia Prague.

They now find themselves in the lucrative group stages alongside big names such as Spurs, and also Real Madrid and Borussia Dortmund. They’ve already faced what will probably be the toughest game in the group when they travelled to the Bernabeu to face Los Blancos. The game gave a good indication of how the side plan to set up against their stronger opponents.

They managed a reasonably respectable 3-0 defeat against the current European champions away from home, and though they were dominated in terms of possession and chances created, they still showed a glimpse of what they might offer going forward, and what type of threat they could pose against other teams in the group.

Much of their play went down the left side through Spanish left back . Indeed it was the 32-year-old former Getafe and Celta Vigo man who had his side’s only shot on target, and also created two of the four chances his side created in Madrid.

He also had more touches of the ball than any other player on the APOEL team, and the graphic below, from WhoScored, shows that over 50 per cent of the attacks were down his side. 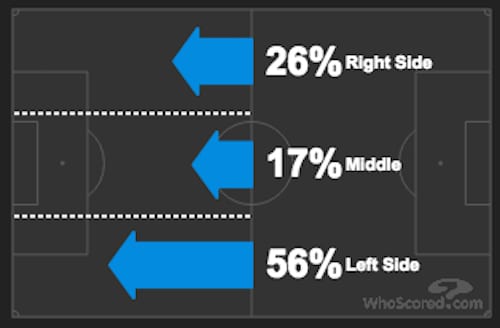 This could be a weakness as much of a strength, and it will put a lot of pressure on left-sided centre back, Carlao. Manager Giorgos Donis set his side up in a standard 4-4-2 formation, which meant there wasn’t really a specialist defensive midfielder covering behind the full back, which gave Cristiano Ronaldo lots of space to run into to open the scoring in their first group game.

The screenshot below shows the situation with a huge gap between the central defenders, no defensive midfielder filling in, and the left back (3 highlighted) jogging back. 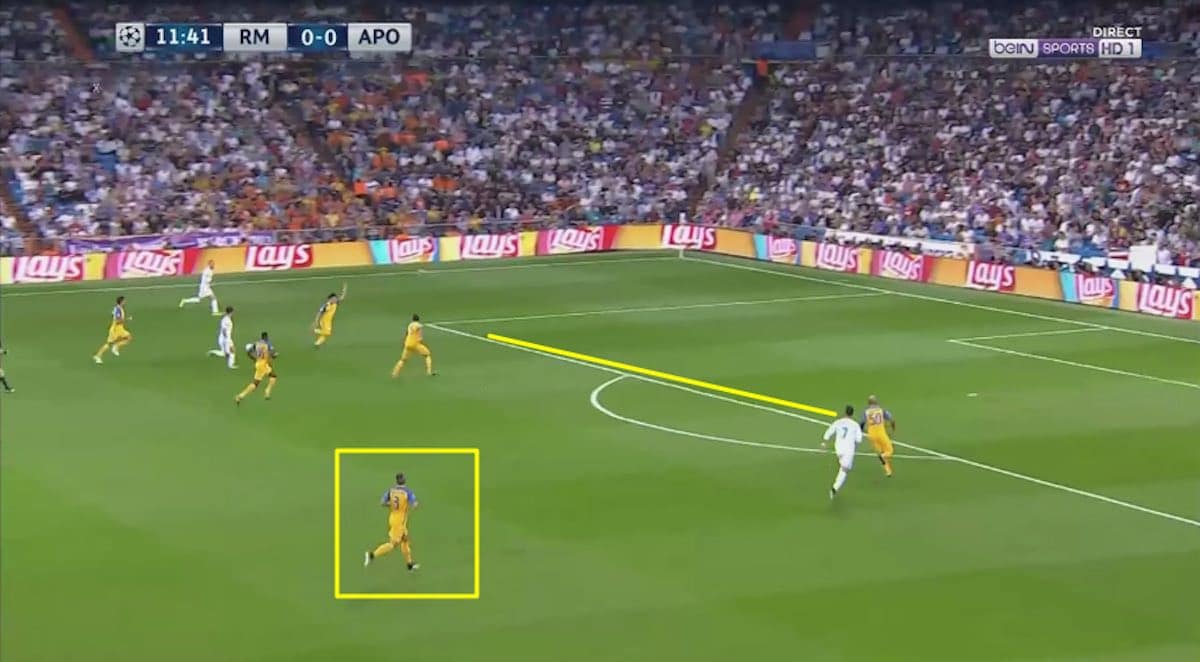 The cross eventually came in from the left and Ronaldo (No.7) was able to use some basic movement to evade Carlao and find space to turn the ball home.

Domestically they use a similar system, but have also experimented with a 4-3-3 with Brazilian-born Belgium international striker Igor de Camargo as the focal point up front during games they dominate on home soil, but since that defeat in Spain they are yet to win a league game, losing one and drawing another.

Son Heung-min is likely to start for Spurs as Dele Alli is still suspended in Europe, and if he starts on the right, rather than the left as he did in the victory against Dortmund, then he could see plenty of joy against the APOEL attacking left back.

Failing this, right-back Serge Aurier, who could start ahead of Kieran Trippier as the Frenchman will now be suspended for domestic games, could also thrive down this flank if he can deal with Lago’s attacking threat.

Regardless of specific strengths and weaknesses of each side, this should be a game which Mauricio Pochettino’s men win easily, but at the same time they will have the pressure of expectation and the knowledge that they have to capitalise ahead of their two games against Real.

If it takes Spurs a good amount of time to break down their opposition, then APOEL could begin to gain confidence and look to claim a point or even snatch a win on home turf. Pochettino’s side will have to remain patient and controlled, and the quality within their side should see them through, and put them in a good position in Group H.