West Ham United picked up a narrow 1-0 victory over Crystal Palace at Selhurst Park on Saturday. But even with the three points obtained against the Eagles, Slaven Bilic’s men still lie 15th in the Premier League with just seven points to show from their opening eight games.

The Hammers are shipping goals at an alarming rate – 17 already this season at an average of 2.13 per game – while they are finding the net less often than they had in the last campaign.

Last season, the East Londoners surprised many with their brand of attacking, free-flowing football which saw them finish in seventh position, just four points outside the Champions League places. They conceded an average of 1.43 goals per game and scored 1.7.

This season their goals average is down to 1.3 per game, so it’s no surprise that the London Stadium occupants are thought to be in the market for attacking additions when the transfer window re-opens in January. 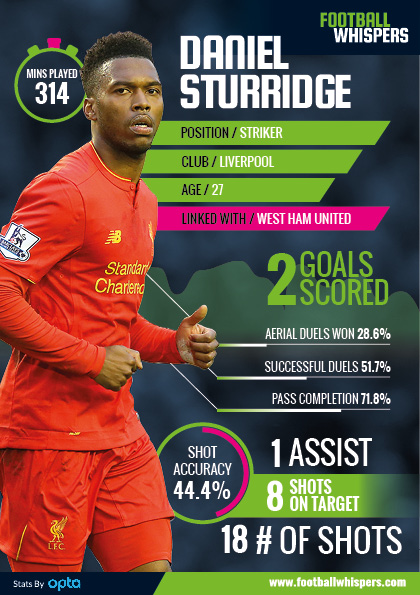 West Ham searched long and hard of a top class striker this summer. Reportedly, bids were made and rejected for Lyon’s Alexandre Lacazette, Marseille’s Michy Batshuayi – who has since joined Chelsea – and AC Milan’s Carlos Bacca.

The Hammers ended up signing Italian international marksman Simone Zaza from Juventus. The deal which took Zaza to the Hammers is an initial loan with an option to buy.

But the latest reports suggest that West Ham have hardly been blown away with Zaza’s performances so far – the former Sassuolo striker has registered no goals or assists in 347 minutes of football – and are considering terminating loan deal early.

That means that the portion of the transfer budget that had been set aside for the eventual purchase of Zaza could be reinvested elsewhere, with Liverpool’s Daniel Sturridge rumoured to be a target for the Hammers. The England striker has been linked with a move to London Stadium by Calciomercato.

Sturridge has made only three Premier League starts for Liverpool so far this season, as his status as a guaranteed member of the Reds first-choice XI has been eroded in recent months. Liverpool boss Jürgen Klopp was openly critical of the former Chelsea and Manchester City player’s injury record last season, and Brazilian forward Roberto Firmino has been preferred as the side’s primary attacker as a false nine on several occasions this term.

Sturridge is yet to find the net in league action during this campaign, but he did manage to bag a brace in the 5-0 EFL Cup rout of Burton Albion.

The 27-year-old striker’s ability is unquestionable but it is perhaps his dependability that has prevented him from becoming a key figure in Klopp’s system, and Firmino’s ability to press from the front gives the former Hoffenheim player the upper hand over Sturridge as a positional rival.

So, if this situation perpetuates, a move for the 24-cap Three Lions forward is not beyond the realms of possibility. And if a switch away from Anfield is on the cards for Sturridge, West Ham would be at the front of the queue to try and sign him.

Bilic will value Sturridge’s ability to link play and interact with supporting midfielders, as well as his lethal finishing inside the penalty area.

So far this season, Sturridge has maintained a pass accuracy of 71.8 percent, which may not seem like a great average, but for a player who operates predominantly in the final third, and who looks to make key passes in tight areas, it’s more than respectable. By way of comparison, England colleagues Harry Kane and Jamie Vardy have pass completion rates of 66.7 percent and 64.7 percent respectively.

Sturridge has also won 51.7 percent of his duels so far this season, meaning that, despite his injury troubles, he is capable of exerting a degree of physicality.

With all of this in mind, the Hammers may view Sturridge as an ideal partner for Andy Carroll. The former Newcastle United target man’s supreme ability to win aerial duels and create havoc in the opposition’s penalty area could see Sturridge acting as poacher, latching onto knock-downs and flick-ons.

Sturridge demonstrated his ability to perform as part of a strike duo during the 2013-14 season, in which he partnered Luis Suarez up front for Liverpool. The Reds came within a hair’s breadth of winning the Premier League with the England striker scoring 21 goals and registering seven assists in 29 league games.

Now, obviously, Carroll and Suarez are vastly different strikers, but Sturridge’s ability to operate in wide areas and unselfishly work alongside another centre-forward makes him an ideal strike partner for anyone.

Ghezzal was outstanding for l’OL last season after getting his chance in the starting XI when star forward Nabil Fekir was ruled out long-term with a knee ligament injury.

Playing on the right wing, the Algerian international was superb when dribbling inside onto his left foot, either looking to slip through defence-splitting passes for the aforementioned Lacazette, or unleashing a powerful strike at goal.

In 29 total Ligue 1 appearances last season – 16 as a starter – Ghezzal scored eight goals and registered eight assists. He also averaged 2.1 successful dribbles per game and 1.6 key passes, and was named man of the match six times.

The 24-year-old came close to joining Everton in the summer but instead elected to remain at Parc OL due to the Toffees lack of European football.

This season, Ghezzal’s position in the Lyon line-up has been less assured as he has made only one start in the league with five substitute appearances. This is due largely to the return to fitness of Fekir, as well as manager Bruno Genesio’s switch to a back three in recent weeks, meaning there is no natural wide position for the France-born number 11 to fit into.

If Ghezzal were to arrive at London stadium, he would be competing with the likes of Dimitri Payet, Manuel Lanzini and fellow Algerian international Sofiane Feghouli for an attacking midfield berth.

Keep Up To Date With The Latest West Ham Transfer Rumours