In the Camp Nou press room, following his side’s 1-1 draw with Barcelona a couple of weeks ago, Diego Simeone offered some words of praise for one of his squad’s more humble members.

“He gave us power in the midfield to counter better in the last few minutes with [Fernando] Torres, [Antoine] Griezmann and [Angel] Correa.” Simeone was referring to young midfielder, Thomas Teye Partey or simply ‘Thomas’ as he likes to be called.

With 17 minutes remaining of a delicately poised game against the Catalans, the Argentine manager settled for a point and put his trust in the 23-year-old to restore balance to an Atleti team who were losing their way. In that time, Thomas completed all of his passes, made one tackle, committed three fouls and picked up a yellow card. It wasn’t pretty by any means but Simeone wouldn’t have wanted anything different. Job done. Atleti left the champions’ back yard with their first league point against the Blaugrana for over two years.

That cameo at the Camp Nou is the only piece of competitive action Thomas has been involved in this term. He’s a peripheral figure to say the least, restricted to substitute appearances at best but not because he’s out of his depth, rather, there’s a multitude of burgeoning talent and wily old heads in front of him in the pecking order. Most young midfielders would find it difficult to displace the likes of: Tiago Mendes, Gabi, Koke, Saul, Augusto Fernandez and Diogo Jota have been sent out on loan with the idea of returning to compete for their place next season, the Ghanaian may be on the move sooner rather than later. 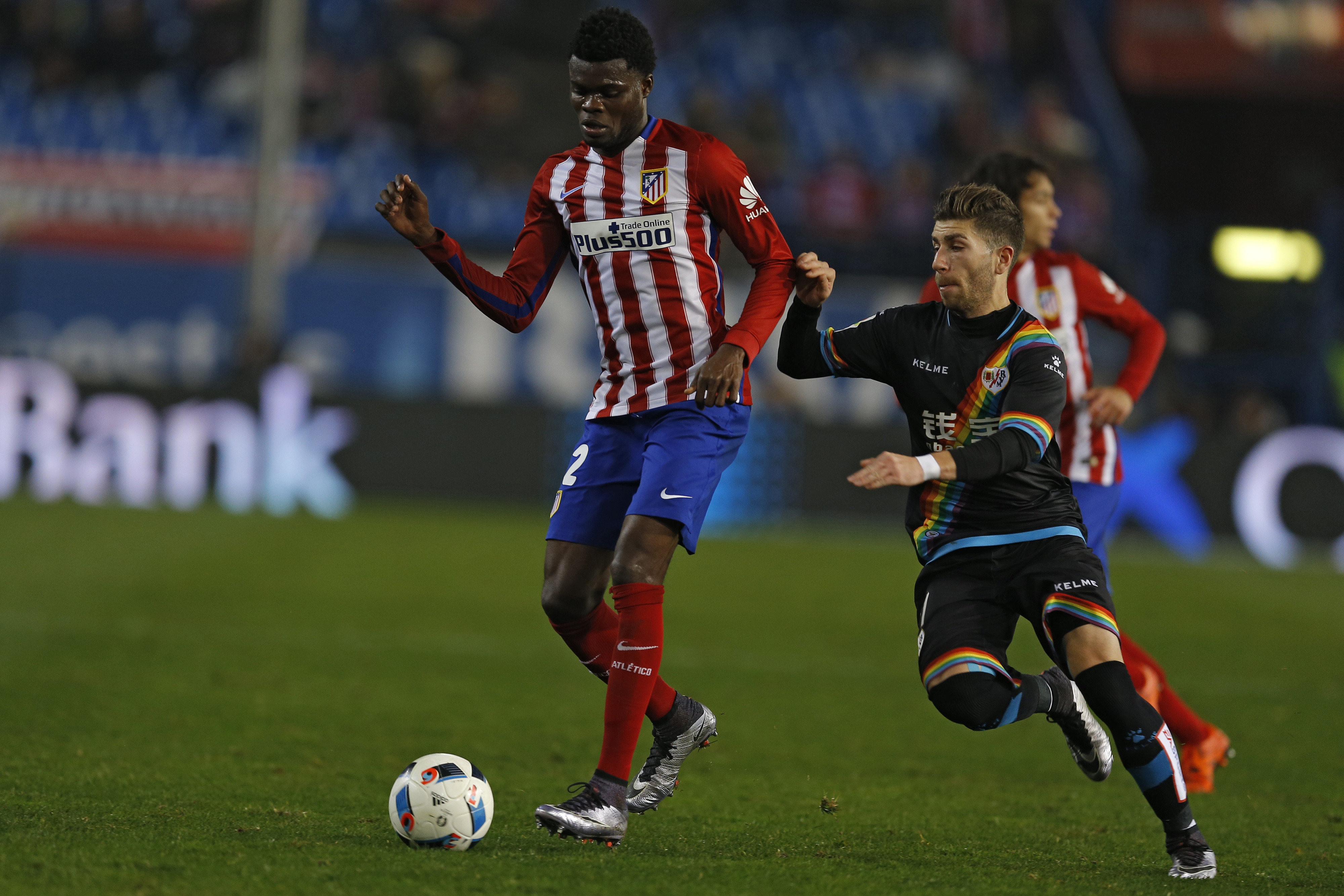 An injury sustained by Augusto Fernandez, which will keep the Argentine midfielder out for a few months, may provide Thomas with a brief window of opportunity to work his way into his coach’s plans but it seems more likely that he’ll leave on loan in January and then permanently in the summer of 2017.

For the last two summers, Thomas has resisted offers from Spain, Germany, Turkey and England, including interest from Watford and Southampton, in order to fight for his place at the Vicente Calderon. As a graduate of the Atleti youth academy, it’s a characteristic that’s ingrained in his skill set which is partly why he’s highly regarded at the club.

Despite making just 23 appearances for the Rojiblancos last season- seven as a starter- Thomas demonstrated his quality in the limited time he was afforded and proved that there’s plenty more to come from him if he’s given opportunities to shine on a regular basis. He’s powerfully built with loads of energy and having been under El Cholo’s tutelage, his attitude towards covering every blade of grass at maximum intensity would be a dream for any manager.

The foundations are, therefore, well and truly in place for Thomas to become an efficient box-to-box midfielder. He can play deep, able to pull strings or act as a destroyer in front of a defence while his ability on the ball allows him to become a driving force in the final third of the pitch. Even though he’s not had the amount of game time he’d like since making his Atletico debut last year, some of Thomas’ attacking contributions were key last term and show he’s capable of changing a game. He scored the winner against second tier outfit Reus in the second leg of the Copa del Rey round of 16, adding to that the following month with a late assist for Correa in a 2-0 victory over Rayo Vallecano and another winner at home to Levante which sent Atleti top of the league at the time.

Thomas leaving his mark on games was a feature of his two loan spells at Real Mallorca and Almeria between 2013 and 2015. It’s telling that he was still able to flourish even though he was placed in difficult situations with both teams scrapping against relegation. In Palma he played 37 times and scored five goals while his Andalucia experience proved similarly fruitful with 31 appearances and four goals to his name. In both seasons with both clubs, there was a change of manager three times but every coach counted on Thomas as a pivotal player, suggesting serious talent and the ability to adapt and thrive in different surroundings.

Southampton, in particular, are long-standing admirers of Thomas having pushed hard for his signature in January and during the recently closed transfer window. The Saints are well covered in the centre of the pitch with Steven Davis, Jordy Clasie, Oriol Romeu and Pierre-Emile Højbjerg providing stiff competition in this department. However, none offer a natural box-to-box option like Thomas does which could prove really useful for the south coast outfit especially if they progress from their Europa League group and aim to go as far as possible in the competition.

The same could be said for Watford, who may want to add some extra impetus to their side in the winter. According to Spanish newspaper, Marca, the Hornets had a £6.5 million approach for the Ghanaian turned down in January so it’s conceivable that they could turn their attention to him once again.

At 23, there’s still plenty of time to mould Thomas into a specialist midfielder or allow him the freedom to express himself both offensively and defensively which should be an attractive proposition for many clubs around Europe. Either way, that looks likely to happen away from the Spanish capital.