Various reports are suggesting that Manchester City are closing in on the signature of Alexis Sánchez. The move would leave Arsenal without their star man and best performer in 2016/17, with little time in the summer transfer window to secure a successor.

However, there are also rumours suggesting that the Gunners have already made a start on the Chilean’s replacement, with Paris Saint-Germain’s Julian Draxler seen as the ideal player to take on the left-sided inside forward role should it become vacant.

The 23-year-old Germany international has made just two appearances for the French giants so far this term, with both outings coming from the substitute's bench. That’s simply not enough for a player of his calibre, and a move could help him get his career back on track.

Arsenal’s system and style should also suit Draxler down to the ground. It would allow him to play in a more central role than the left wing berth he has often been stuck in at PSG, and it would also seem him operate in a side that tends to dominate the ball, affording him plenty of opportunity to influence, create and score.

Arséne Wenger tried to lure the former Schalke man to the Emirates Stadium before, but the move failed to materialise. Now, however, it looks closer than ever thanks in the main to an influx of expensive talent in the French capital.

Paris Saint-Germain pulled off undoubtedly the most stunning transfer of recent times when they paid a whopping €222million to trigger a release clause in Neymar’s Barcelona contract, signing the Brazilian superstar in sensational fashion. 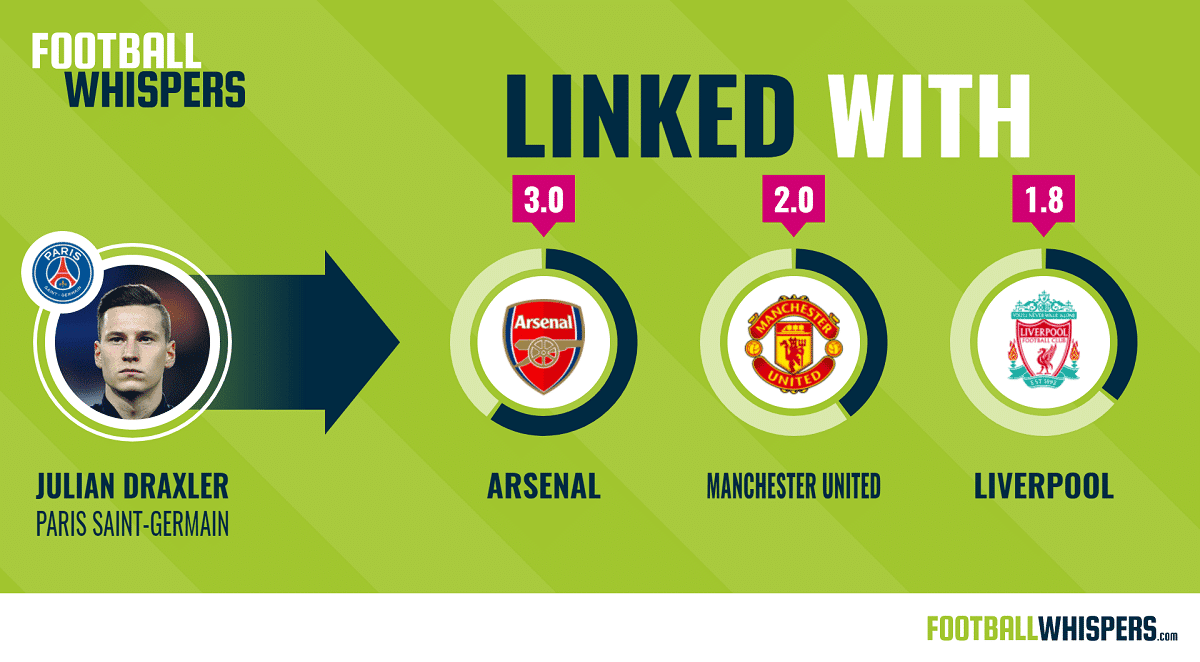 That might not be the last bold attacking move the Parisians make in this window, with intense speculation that they will also try to bring in Kylian Mbappé from reigning Ligue 1 champions Monaco. To pull this off, however, they may need to sell first.

Draxler has been pushed further down the pecking order and with PSG needing to offload, he could be keen to help out. Currently he is also linked with Manchester United, Liverpool and Inter Milan, but at 3.0 the Arsenal rumour has the highest rating on our index.