Watford captain Troy Deeney is the latest player to be linked with the runaway champions, but pricing looks to be a stumbling block that has put paid to any chance of a deal in the upcoming weeks.

We’ll discuss the potential for a move, and some of the different options for the champions up front in the market.

Deeney was a revelation in the league last year, notching 13 goals in 38 appearances. He helped the club to gain promotion to the Premier League in the 2014-15 season, and he’s quickly morphed into a dependable striker at league level.

(In case you didn’t know, he’s a great passer and offers brilliant hold up play, along with a decent defensive contribution and an eye for goal.)

The Foxes seem to have secured the services of Jamie Vardy for another year, but they do need more bodies up front if they don’t want to overstretch the squad, as they battle for numerous trophies.

The club released a statement on their website last week regarding the future of the England hitman:

“Leicester City have today (Thursday) agreed with the representatives of Jamie Vardy to extend the England international’s contract with the Premier League champions for a further four years. Both parties hope that this announcement will end recent speculation regarding Jamie’s future and confirm his long term commitment to Leicester City Football Club.” 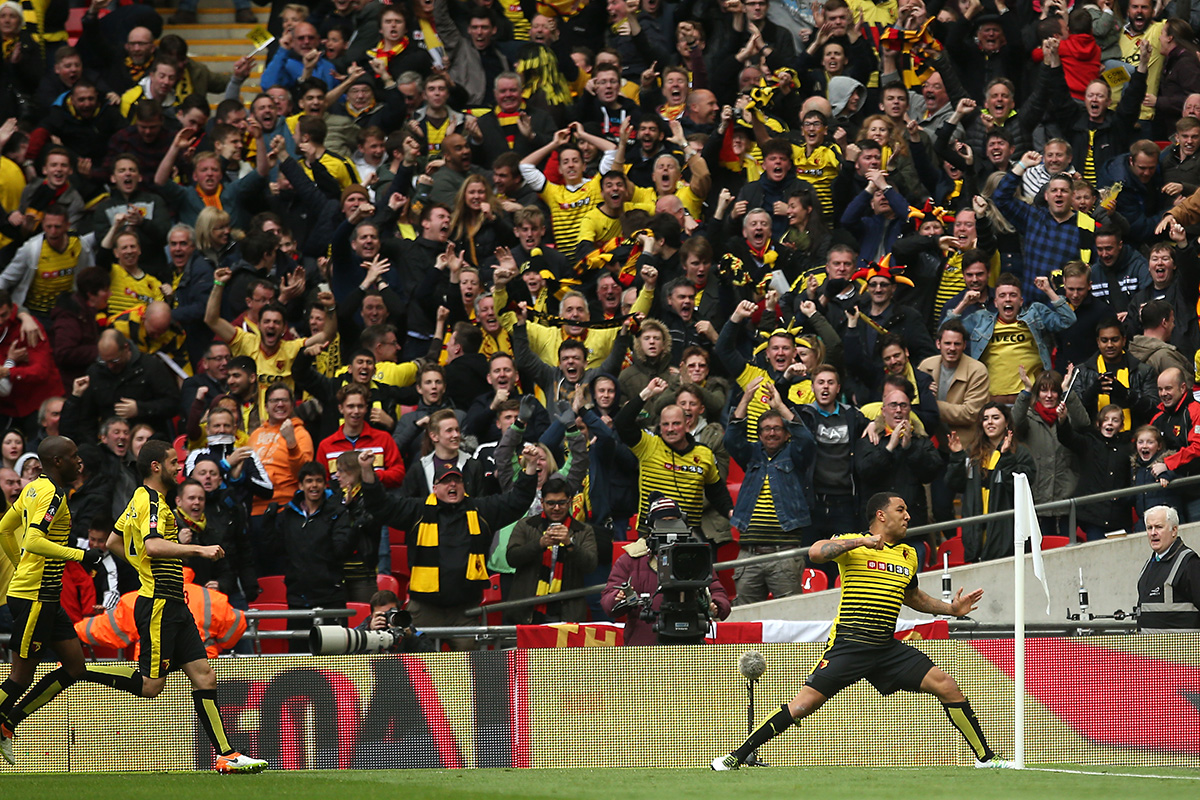 Now that they’ve secured their main man, it’s time to plan for the future. Vardy was injury-free as he ran rampant in the league, but it’s never a good idea to rely on one player alone.

£30m is the price that has been quoted by Watford, and it seems to have been enough to stop Leicester dead in their tracks. He’s a solid player and he’d be a great addition to their squad, but £30m is too high when you look at comparable strikers in the league.

The player looks to have had more than enough of the rumours, and took to Twitter on the 22nd of June to set the record straight:

So that looks to have put paid to those rumours. It’s clear that the club don’t want to sell, and he seems happy to stay at the team that he has called home since 2010.

Despite a recent high, the transfer index score has slipped since he sent out the tweet. (It currently stands at 3.0 out of five, which is low compared to the 4.1 rating just a few days ago.)

Wilfried Bony has been named as a possible replacement as Leicester search for a new striker, and it would be an escape route for the Ivory Coast international. The former Swansea City star joined in a £28m deal back in 2005, but failed to reproduce his form at Manchester City.

He’s found options limited, and was eventually relegated to third choice after the emergence of Kelechi Iheanacho as preferred backup for Sergio Aguero. (Bony only managed to get four goals in 26 appearances, and he’s looked to be a shadow of the player that earned a move.)

The champions could offer first team football, even if he does have to play second fiddle to Vardy at first. It would also be a chance to regain some much needed confidence, and show his detractors that he still has a lot to offer in the Premier League.

He would cost roughly £20m according to reports, and it’s a lot cheaper than attempting to prise a player like Deeney away from a team that don’t want to sell. The fact he has experience and something to prove are added bonuses that could also prove to be vital. If he can regain his confidence, he’s sure to score goals if he’s given opportunities.

No matter what, they need to make sure they sign somebody who can get goals, but the player also has to be willing to accept a smaller role within the team because of Vardy.

Swansea were also said to be in the hunt for their former striker, but his wage demands have increased since joining Manchester City. (Which is fairly understandable.) Champions League football is also a preference, and the Foxes can offer game time in the biggest club competition in Europe.

Watford seem to have managed to hold on to their captain, despite the allure of Champions League football on offer at Leicester. It paid off to play hardball, and the player himself seems to have no problem with sticking with the team.

As for LCFC, they need to keep plugging away. Judging by their transfer targets, they want to secure the services of a proven Premier League striker. Deeney and Bony are a good place to start, and it’s a key area that they could improve in. If they can agree financial terms with Bony, a deal looks likely.

Here’s a video showing some of the reasons why Deeney would have been such a great acquisition:

The Football Whispers index keeps you up to date with all of the latest transfer news. What do you think of the fee for Deeney? Is he really worth £30m? Let us know what you think in the comments below!