In spite of his recent heroics at the Stadio Olimpico, it appears as though Francesco Totti’s 27-year affiliation with AS Roma could be coming to an end. If the Giallorossi icon does leave Italy this summer, he certainly won’t be short of potential suitors; let’s take a better look at the growing rumour that Leicester City could be his next destination.

Very few players in world football are regarded with the universal respect that former Italy forward Totti commands. The 39-year-old has terrorised opposing defences for over two decades and, like a fine wine, seems to get even better with age. Quite simply: he is a legend of the game.

Injuries and age have seen Roma’s famous prodigal son take a backseat role for large portions of the current campaign, and the club’s thoughts on offering a contract extension this summer remain unclear. Having dedicated himself to the club for over quarter-of-a-century, turning down big money transfers at various stages of his career, nobody in the Italian capital would blame him for seeking pastures new in 2016/17. There’s no question that the veteran striker still has plenty to give, even if it is primarily as an impact sub.

Totti has come of the bench to rescue his club in each of his last three appearances. An assist against Bologna was followed by a late equaliser at Atalanta before a four-minute double salvo turned no points into three against Torino on Wednesday night. The legs might be slowly going, but the Italian  has always relied on the speed of his mind rather than body. Even at this late stage in his career, he would be a worthy addition to any attacking unit; not least because he could offer so much in terms of tuition to younger stars.

Throughout those injury plagued months earlier this season, it had been suggested that the Italian was ready to hang up his boots this summer. However, the recent revival has given Totti a new lease of life and a transfer index rating of 4.2 suggests that the King Power Stadium could well be his next destination.

Totti has always been a man for a challenge, and playing for the current English champions elect would certainly provide that. The Foxes will be entering uncharted territory in next season’s Champions League, and the Roma man’s experiences of the competition could prove to be vital. 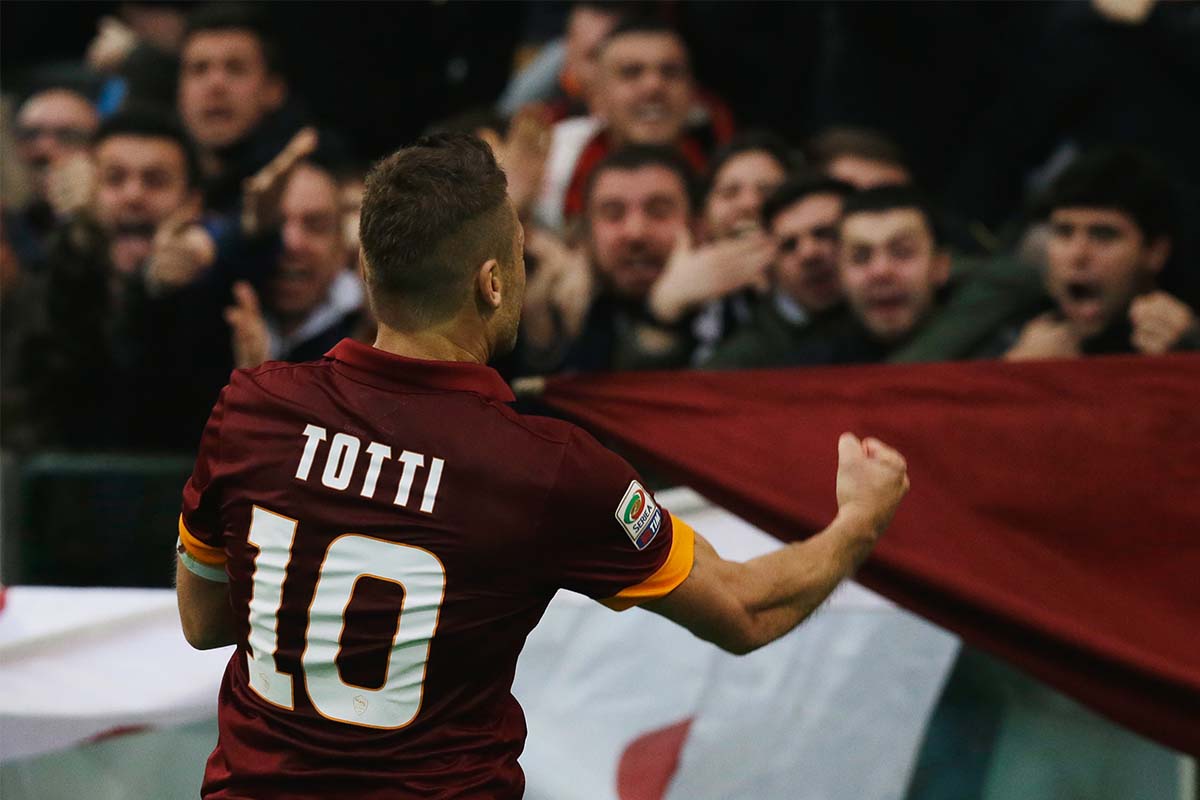 Leicester benefitted greatly from having Esteban Cambiasso around the dressing room as they battled to survival in 2014/15 under Nigel Pearson, and the King Power club would hope to see a similar impact if a move for the Roma man should materialise.

Experience won’t be the only attribute tempting Claudio Ranieri with a move for a man that was his top scorer in both seasons at the Giallorossi helm. Leicester have performed brilliantly in this fairytale campaign, but they’ll need to diversify a little next term as opponents will be more familiar with those successful tactics. Totti would undoubtedly offer an alternative option.

Even as he approaches his 40th birthday, the Italian is more than capable of sprinkling a little magic onto the King Power turf. His intelligence, reading of the game and intrinsic ability on the ball would help slow the play and dictate matches. It might be at contrast with a philosophy that for large parts of this season has been built on relinquishing possession, but having that weapon in the arsenal would certainly boost Leicester’s chances of competing on several fronts. Moreover, the Roma man’s quality from set-pieces could become a useful asset too.

Would Totti join as a regular starter of the likely Premier League champions? No. Nonetheless, he could play a functional role both on the pitch and the training pitch. Meanwhile, that winning mentality would help brighten up any dressing room. Such inspirational leaders aren’t easy to find; the opportunity to sign one on a free transfer is not one that a team of Leicester status can afford to pass up. After all, the next step following this remarkable campaign is to achieve sustained success. Totti could be a killer addition to help them achieve it.

Ranieri is unlikely to bend over backwards in hopes of completing the capture of what would be a squad player. Nevertheless, the arrival of Totti would make a statement of intent from the Foxes and could be another selling point to future transfer targets too. The risks of a free transfer would be minimal too while the possibility of a coaching role could also appeal to both club and player.

Assuming a new contract at the Stadio Olimpico doesn’t emerge, Totti could yet opt for the glamour of a big MLS pay day. However, this is a player synonymous with ambition and the Leicester City project would seemingly be the perfect fit for one of the game’s modern greats.

It’s certainly a fascinating prospect. Stay in touch with the latest developments using our transfer index and you’ll be the first to know where Totti will be plying his trade next term.