Manchester United aren’t exactly bereft of midfield talent, but the potential signing of Toni Kroos from Real Madrid is sure to get supporters excited. They’ve been stung in the past when dealing with Los Blancos, but could a move for the German midfielder signal that the tide is turning?

From David Beckham to Cristiano Ronaldo, players leaving Manchester for the Bernabeu stadium tend to do well, while Angel Di Maria proved that it can be hard to acclimatise to the rigours of the Premier League when he went the other way in 2014.

Toni Kroos is an excellent footballer, and what he lacks in pace he makes up for in technical ability. His passing range would likely improve United’s attack instantly, and at just 26 he could be a long-term investment for the future. Could he be the one to rebalance their transfer dealings?

His score on the transfer index has levelled out at 3.4, indicating there’s a distinct possibility that he could leave Real Madrid after struggling this year. Marca awarded him just 4/10 for his input during the first half of the season, but there’s no doubt that he still has the ability to perform at the highest level.

Kroos speaks English fluently, and used it to communicate with former Real Madrid manager Carlo Ancelotti when he first moved from Bayern Munich. Bastian Schweinsteiger also played alongside him at Bayern, adding a link that could see the player settling in easier than Di Maria.

(Then again, being burgled whilst eating dinner with his family also helped to unsettle the Argentina international.)

The authenticity score of 56 isn’t the highest, but that’s not surprising considering there’s still some confusion as to whether or not Jose Mourinho will take the reins as manager at the end of the season. (The latest reports indicate the he has signed a pre-contract agreement with the club, but they may still decide to stick with the much maligned Louis Van Gaal.)

Another potential issue is the David De Gea transfer saga that ended with the Spanish club bested for the time being, although that was only one battle in a war that is sure to wage on when the transfer window reopens. 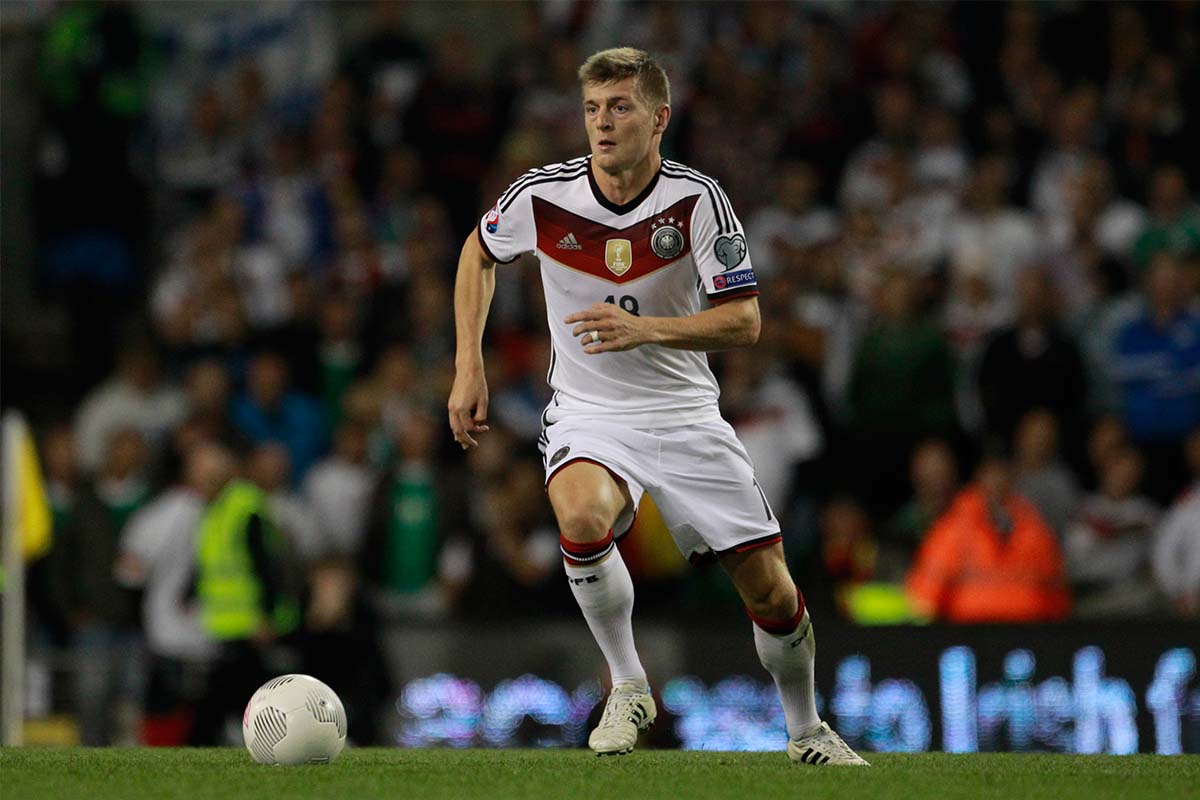 Could the deal be used as a way to heal the animosity between the two clubs? They’ve managed to stand firm in the face of Real’s interest in David De Gea for now, but this could be a turning point. On the other hand, the goalkeeper has been priceless for United this season, and you’d be hard pressed to find supporters who would want to make the trade.

Michael Carrick will be 35 by the time Manchester United kick-off for the first time next season, and he’ll soon have to be replaced. 21 league appearances must be taking their toll on his body, just how much longer can he be expected to continue to pull the strings while occasionally filling in at centre back?

There are rumours that the former Tottenham midfielder could be released at the end of the season, freeing up at least some of the space necessary to incorporate the German star, though it’s said that the England midfielder wants to extend his stay for another 12 months. It’s fair to say that he’s earned it.

Kroos would likely slot into the first 11 with no problems, which could potentially allow Marouane Fellaini to drop into a more defensive position, instead of haplessly leading the attack. It’s an interesting proposition, and it would alleviate many supporters issues with the current setup at United.

The problem is, the Red Devils are unlikely to be the only club in the hunt, with Arsenal reportedly tabling a bid already. Manchester City could also be a possible destination because of Pep Guardiola’s past interest in the World Cup winner, and that’s only the English clubs. There could be a battle if his signature really is up for grabs, and we’ll find out soon enough. You can always check the index to see if there’s any change in the scoring.

Champions League qualification is usually cited as an important factor when it comes to transfer deals surrounding big players, but Manchester United managed to buck the trend when they signed Di Maria. The win over Manchester City yesterday also boosted their chances of a top four finish, though they still look a few signings away from truly challenging for the title. Will their current squad be enough for a player like Kroos?

For all the money spent over the last few years, he’s a player that could truly transform the way the team attacks, and he would be a great acquisition in terms of prestige and potential.

United tend to be linked with all manner of players when the window opens. (Sometimes to the point of ridicule.) Nonetheless, this is a move that would be seen as a statement of intent for next season, and this time, it might actually work out for the team in red.