As Leicester City prepare for the pending departure of top scorer Jamie Vardy to announce his decision to join Arsenal, the helpless Premier League champions must now turn their attentions to bolstering their squad ahead of next season’s title defence. Claudio Ranieri’s first job will be to replicate the pace and goals that they’ll be losing; ironically, Theo Walcott might be the ideal solution.

Arsene Wenger’s willingness to trigger the release clause in Vardy’s contract has stunned the football world as it shows a monumental shift in transfer tactic from the Frenchman. However, nobody will be more shocked than the Foxes, who would’ve been optimistic about keeping the England striker. The 29-year-old may yet stay as the champions have offered a new and improved contract.

Any move for the Gunners star may hinge on the potential sale of Vardy. Should last season’s 24-goal striker decide that his future lies at the Emirates, the current transfer index rating of 1.8 would almost certainly shoot through the roof. But even if Leicester hero does stay, the move for Walcott is still an avenue that Ranieri could be eager to pursue.

For all the accusations of failed potential, epitomised by the omission from England’s Euro 2016 squad, Walcott has always shown plenty of promise. Meanwhile he hasn’t always been the chief culprit behind those shortcomings. The combination of injuries and squad rotation has often resulted in limited playing time, which has stuttered progress greatly.

The most obvious example of this came after his best season: the 2012/13 campaign saw Walcott bag 14 league goals whilst additionally chipping in with 12 assists, opening the door for the speed demon to finally start vindicating the forecasts that he could become the new Thierry Henry. Frustratingly, a return of just 27 Premier League appearances over the next two seasons saw all momentum evaporate.

Moreover, Walcott has regularly stated his disappointment at not being given a fair crack at operating as central striker. Whether Vardy joins or not, a move away from the Emirates is vital for his career. At 27, it’s time to step up; this will only happen if the former Southampton star is afforded regular first-team opportunities. With Champions League football on the table too, the King Power must sound like an attractive proposition. 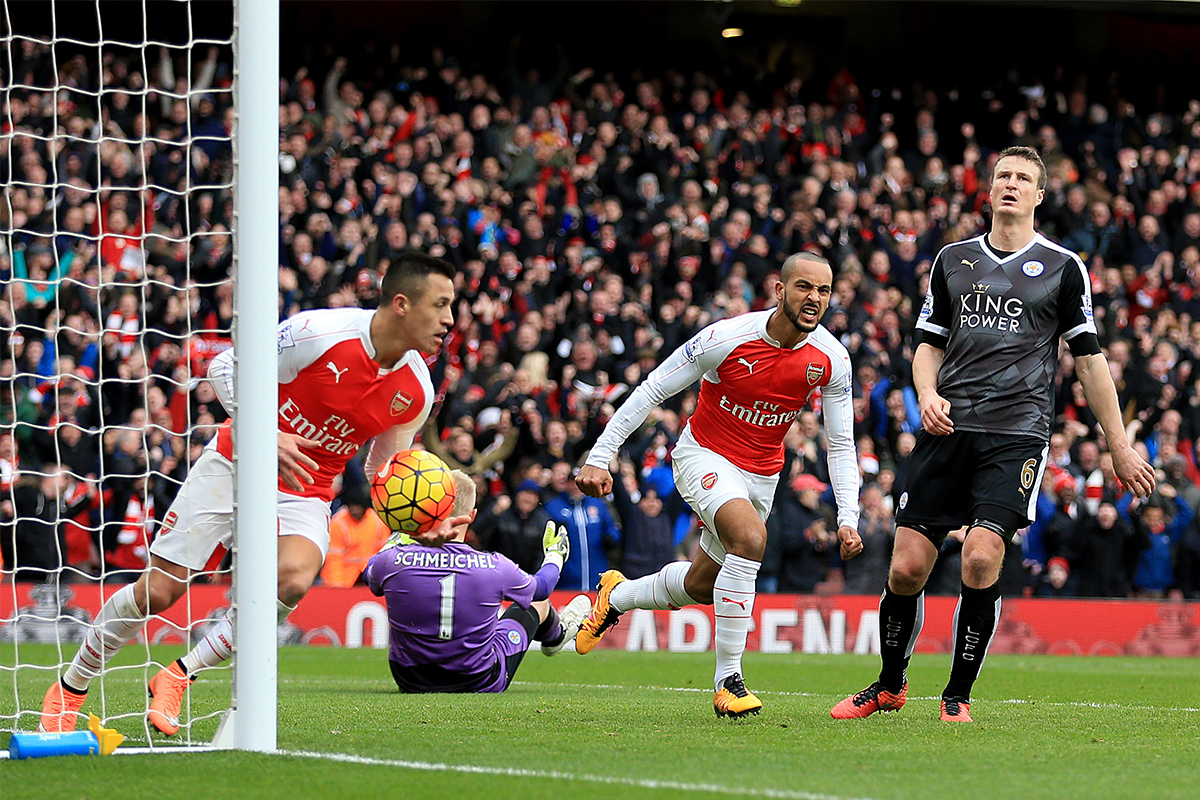 It’s a move that would seemingly tickle Leicester’s fancy too. Ranieri evolved from tinkerman to thinkerman in 2015/16, and will want to retain as much of the title-winning blueprint as possible; if the Italian can’t prevent Vardy’s expected departure, then Walcott may be the closest replacement. Of course, there are clear dissimilarities between the two Premier League talents, but they share one common asset: pace.

Regardless of past disappointments, Walcott’s sheer natural speed will always pose a threat to opposing defences. If he can replicate the success that Vardy has enjoyed from playing on the shoulder, Leicester could unlock a level of consistency that the Gunners simply haven’t. Ranieri has been the master of maximising the qualities of his Foxes by allowing them to breathe. If the 64-year-old believes that he can do the same with Walcott, then a bid could be tabled before the ink on Vardy’s proposed Arsenal contract has even dried.

Forget the fact that Leicester are champions: the real question for Ranieri should be whether Walcott would improve the squad. The answer is a categoric yes. As long as the club can obtain their target without the need for breaking their transfer and salary structures, it’s a move that has to be taken.

Leicester’s hopes of retaining the title are almost as unlikely as they were to win it. Their phenomenal achievement makes it impossible to rule them out completely, but they’d be more than happy with Europa League qualification in 2016/17. Essentially, the heroics of last season afford the opportunity to turn themselves into genuine European regulars. Despite their status as champions, they’re still a way off the likes of Arsenal and the Manchester clubs; Walcott can help bridge that gap.

The stars aligned perfectly for Ranieri and Leicester last season, but they cannot afford to take too many risks heading into next season. They’ll have to deal with the added pressures of being champions and playing on the elite stage Champions League football whilst presumably coping with the departures of several of their title-winning stars. Experienced Premier League footballers blessed with a natural hunger must be top of the summer shopping list. Walcott offers those qualities and, perhaps more importantly, can help plug the Vardy-shaped gap that appears virtually certain to appear over the coming weeks.

Despite being sprinkled with several dazzling moments, Walcott’s 11-year Arsenal career hasn’t gone to plan. Nonetheless, the England man still has plenty to offer the Premier League and could do far worse than joining the reigning champions. If the chance to finally occupy the central forward role is offered, Leicester might be his next destination. For the neutral, at least, it would be one of the most intriguing transfers of the summer.