Roma are thought to be closing in on the signing of gifted midfielder Jean Michaël Seri from Ligue 1 high flyers Nice.

Seri had previously been a Barcelona transfer target and was wanted by Paris Saint-Germain, but the Serie A side have stolen a march in the race for his signature.

The player has openly admitted that he dreams of playing for Barcelona, but the Blaugrana appear to have focussed on signing Marco Verratti from PSG, while the Parisians have taken a step back from their pursuit of Seri to train their attention on convincing the Italian playmaker to stay at the Parc des Princes.

Seri was also an Arsenal transfer target and liked by Tottenham Hotspur but a move to Italy is looking the most likely option at this stage.

Initially brought in as a defensive midfielder, Seri has developed into more of a box-to box player at the Allianz Riviera, at his best when operating on the right of a midfield three.

Mario Balotelli stole the headlines but Seri was the driving force behind Nice’s remarkable 2016/17 season, finishing third in Ligue 1 under Lucien Favre to book a place in the Champions League qualifiers.

Nice signed Seri from Paços de Ferreira in Portugal in 2015 for €1million and could be set to make a huge profit on the player this summer.

The 25-year-old playmaker grew up as a Barcelona fan and idolised Xavi. He was thought to be close to moving to the Camp Nou, with the player’s agent having met both Barça and PSG, but the Catalan giants have switched their focus to signing Verratti, and Roma now lead the chase for his signature.

He may only be 5ft 5ins tall but Seri has tremendous upper-body strength and shields that ball well. He is also an excellent short-distance dribbler, a skill crucial to press evasion.

Skilful, blessed with an incredible first touch and excellent vision, Seri always appears to be one step ahead of the opponents. The former Porto B player strikes the ball well from distance too. In addition to all of his offensive attributes, he is also positionally disciplined and unafraid to chip in defensively.

Do The Reports Come From A Reliable Source? 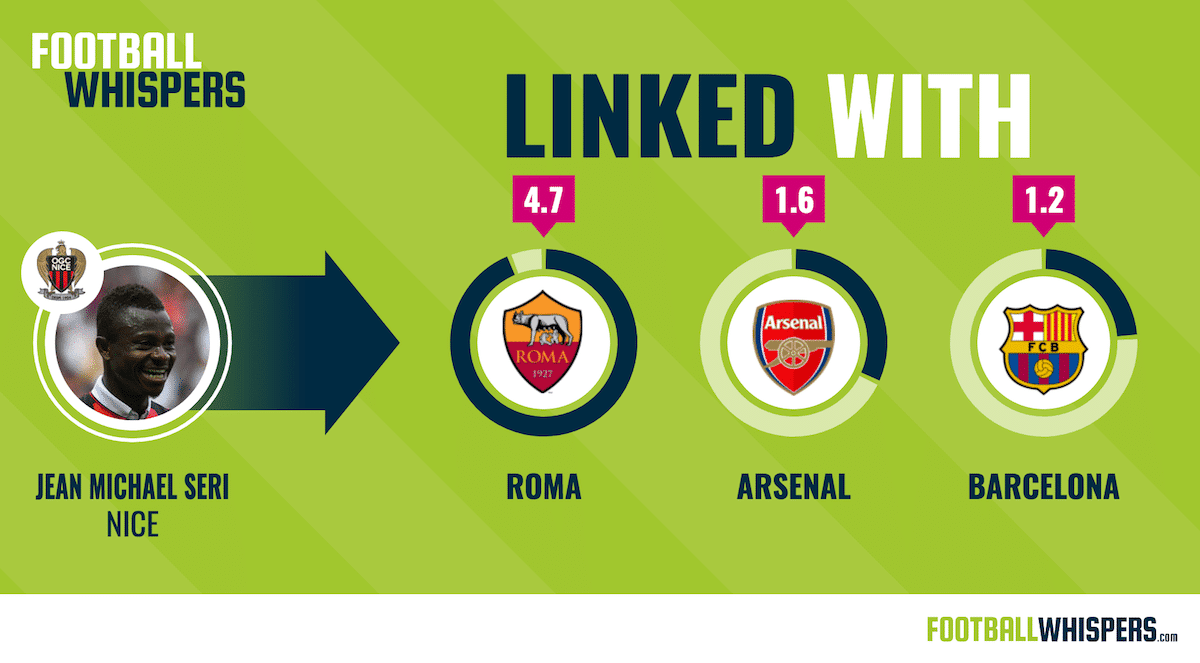 RMC Sport in France are reporting that Seri has agreed terms with Roma and they are as reliable as they come. They also claim the Seri A side will offer €35million for the Nice star, however, L’Equipe claims Roma have only offered €15million to date.

With a release clause believed to be set at €40million, Nice will be aiming to recoup much more than €15million for their midfield maestro and may even demand that the full buy-out figure is met.

If Roma are able to pull off the capture of the talented 25-year-old, it will mark the first major piece of transfer business – at least as far as incomings are concerned – since former Sevilla sporting director Monchi joined the Giallorossi.

Is The Move Financially Viable?

The imminent €35-40million sale of Mohamed Salah to Liverpool would give Roma the finances to sign Seri, although the Italians are yet to meet Nice’s valuation.

Would He Be A Good Tactical Fit?

Seri could complement Roma's box-to-box dynamo Radja Nainggolan in midfield or even replace him as the 29-year-old Belgian powerhouse is a rumoured Manchester United transfer target, with Inter Milan also said to be interested.

It remains to be seen how new coach Eusebio Di Francesco intends to line up his side, having only recently left Sassuolo to replace Inter-bound Luciano Spalletti at Roma. The Italian coach favoured a 4-3-3 formation with the Neroverdi, though, which would suit Seri down to the ground.

Seri, having never played in Italy, and Di Francesco, having never managed outside of the Peninsula, have not previously worked together. There is not necessarily any kind of pre-existing relationship between the player and the club which would make this deal any more likely.

However, renowned as a shrewd operator in the transfer market, Seri is the exact kind of player that Monchi made a name for himself by identifying and securing at Sevilla.