Like so many former Manchester United youth prodigies, Nicky Ajose had fallen off the radar of the wider football audience by his early twenties. The former England youth international was thought of as a real prospect at United, for whom he signed in 1999.

Despite signing professional forms with The 20-time league champions in 2009, Ajose never made an appearance for the first team, and after the conclusion of a successful loan spell at hometown club Bury, he signed for Peterborough Town, who at the time were managed by Sir Alex Ferguson's son
A series of loan spells followed, but Ajose struggled to really find a home as his fledgling career floundered, and after signing permanently for Leeds United in 2014, he was again loaned out, this time to Crewe Alexandra for a season, before being released by Leeds last year.
But this is where Ajose's story begins to come around. Picked up by Swindon Town a day after his Leeds release, the 24-year-old set about getting his career back on track.
Finally feeling at home at a club, and with the confidence of being relied upon as a key player, Ajose netted 24 goals last season, finishing second highest scorer in League One, behind only Wigan Athletic's Will Grigg (who is on fire, apparently).
But now it would seem that Ajose could well be on the move again, with Birmingham City showing strong interest in the former Manchester United forward.
As rumours of The Midlands club's imminent move for Ajose gather pace, the Football Whispers Index have given the likelihood of the transfer a score of 2.4 out of five, marking it out as a Whisper to Watch. 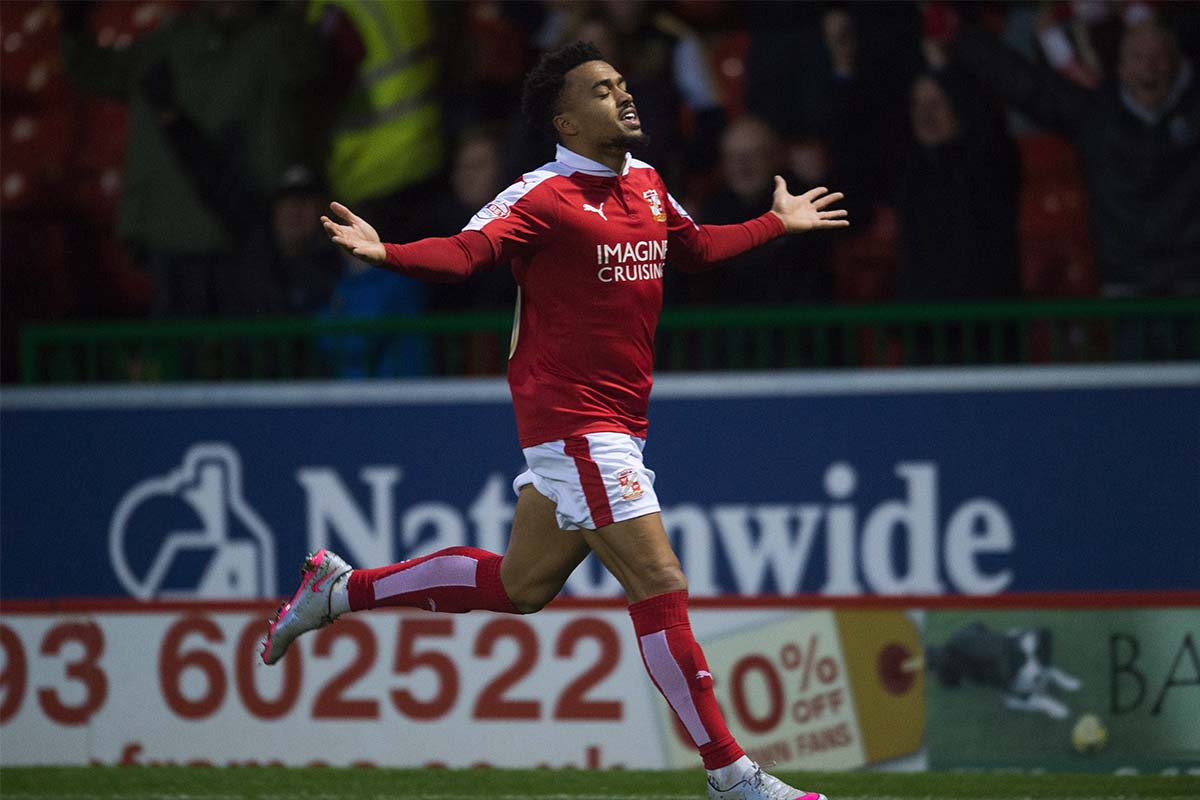 The Wiltshire Gazette and Herald are reporting that : “BIrmingham City are now heading the chase for the services of Swindon Town hotshot Nicky Ajose, according to reports.
“Preston North End, Bristol City and Bolton are also rumoured to have expressed interest in the 24-year-old with Birmingham now having apparently joined the chase.”
When questioned about Ajose's future last month, Swindon chairman Lee Power said: “We have got other interest from the Championship, so we have turned that down. It didn’t meet our valuation. We will just have to see how things progress between now and the start of the season.

“Obviously, we want to keep Nicky. By turning that bid down it shows that we do.” “Like anything, though, everyone has got a price. It’s the same for the people that we are trying to purchase and look at. We will just have to see how that develops.”

So although Ajose is key to Swindon, he would be available to for the right price. And Birmingham manager Gary Rowett will be looking to get himself a bargain as he strengthens his squad for a promotion push next season.
Having left Burton Albion to take over at St. Andrews in October last year, Rowett guided Birmingham from second-from-bottom, to the safety on mid-table, finishing well clear of the relegation zone in 10th place, and only 11 points behind the playoff positions.
Rowett will hope that the Blues will be able to kick on next season, and contend for a playoff spot and, having lost young speedster Demarai Gray to Leicester City in January, the pacey, lethal finisher Ajose, would be a more than welcome addition to his squad.
And although Ajose may have his reservations about leaving Swindon, after finally getting comfortable at a club after a career of bouncing around, the opportunity to join an ambitious Championship club the size of Birmingham City, might just be too good to turn down.
Having left Manchester United five years ago, joining a promotion-chasing Championship club could see Ajose finally make it back to the Premier League, having paid his dues in the lower divisions, and taken the long route around most of the country.