Leicester City supporters could be forgiven if they have yet to come down from the giddy high elicited by their team’s remarkable season. Their miraculous, against all odds title triumph sent shockwaves throughout the sporting world, and will stand in history as arguable the greatest underdog story of all time.

But the vultures are circling. If anything is going to kill Leicester fans’ buzz, it’ll be the dismantling of their Premier League winning heroes at the hands – or, more accurately, the wallets – of the established elite clubs.

Jamie Vardy’s potential switch to Arsenal has the possibility of firing the starting pistol for a mass exodus of the King Power Stadium. Nobody expected Arsenal boss Arsène Wenger to move for 29-year-old Vardy, but he has, offering to meet the England striker’s contractual buyout clause of £20 million. And Vardy, currently on national team duty preparing for the European Championship in France, is said to be mulling the offer over.

Vardy has one foot out the door, and the likes of Chelsea, Paris St. Germain and Barcelona are hoping to entice others to follow suite.

PFA Player of the Year Riyad Mahrez is believed to be attracting interest from Barcelona and Arsenal, with both Manchester clubs monitoring the situation. And French midfield destroyer N’Golo Kanté is thought to be on the wish-list of Chelsea and PSG.

Leicester will do all in their power to hold onto their title-winning stars, new contracts will likely be offered, but they may ultimately have to admit defeat.

So to mitigate against potential losses, and to guard against a loss of the momentum gained by last season’s success, they will take to the transfer market themselves.

And the first major move they look set to make this summer is a deal to bring Nice midfielder Nempalys Mendy to the East Midlands.

The Football Whispers Index is currently giving the potential for Mendy joining Leicester a score of 4.2 out of 5, suggesting there is plenty of substance to the rumours. 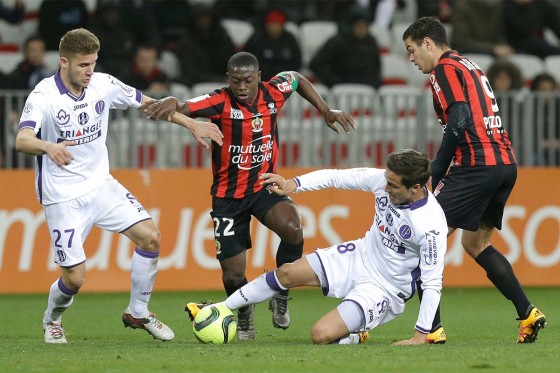 There is some confusion within the press about just how much The Foxes are offering for Mendy, with The Sun claiming a bid of £11 million is being prepared, whereas The Daily Mail believe Leicester have already put in an offer of £8 million.

One thing that the daily papers do seem to agree on, however, is that a move for Mendy appears to signal that Kanté will not remain with the club next season, with The Daily Express claiming: “The Foxes have reportedly targeted the £12million-rated midfielder as a potential replacement for N'Golo Kante, who has been linked with a move away this summer.

“The Frenchman only arrived at the King Power Stadium last summer, but has attracted the attention of Arsenal and Chelsea after a stunning debut campaign in England.”

Now, this could well just be a case of the tabloids putting two and two together and coming up with five. The reason for the assumption that the acquisition of Mendy is evidence to Kanté’s imminent departure, is down to the fact that, at first glance, the Nice player seems cut from the same cloth as Kanté.

A diminutive defensive midfielder, with positional awareness and responsible use of the ball; it’s easy to see why the comparisons have been made.

But on closer inspection, there are some key differences between the two Frenchmen. Namely that Mendy is not as accomplished a tackler as Kanté, and perhaps would consider himself to be a more cultured passer.

As an ever-present starter throughout Nice’s Ligue 1 campaign last season, Mendy demonstrated a level of consistency and dependability. And, although most commonly deployed as a defensive midfielder, the former Monaco player was also utilised as a more conventional centre-midfielder on seven occasions (per whoscored.com).

With Leicester’s recent recruitment record — especially within the French market, from where they have signed both Kanté and Marhrez for a fraction of what they can expect to receive should they sell either player – Leicester fans should take solace, and trust that, even if some of their heroes are sold, new gems will be unearthed.