Manchester City are believed to be on the verge of signing veteran full-bak Dani Alves from Italian champions Juventus. Pep Guardiola is on the hunt for a new right-back this summer and the Brazil international is viewed as a cheaper alternative to Tottenham Hotspurs' £45million-rated Kyle Walker.

The Football Whispers Index currently rates City's chances of securing Alves at 3.2 out of five, with Chelsea ranked at 1.6.

The three-time Champions League winner has reportedly told Juventus that he wants to leave this summer, and may yet negotiate his release from the club, allowing him to move for free. However, if he is unsuccessful in doing so, City are reportedly willing to pay up to £5million for him.

Alves has already verbally agreed terms on an £85,000-er-week, two-year deal at the Etihad Stadium according to , an improvement on the £60,000 a week he currently earns in Turin.

Alves is an adventurous right-back also capable of playing as a wing-back. He even played as a right winger in a 4-2-3-1 formation towards the end of last season, allowing Juve to switch between 4-2-3-1 and 3-5-2 within games.

Vastly experienced with over 700 career games under his belt, Alves has won 36 major trophies at club and international level, including titles in Brazil, Spain and Italy, three Champions Leagues and a Copa América with Brazil.

The former Barcelona star showed last season that, even at 34, he still has plenty left in the tank with decisive performances in the latter stages of the Champions League.

Alves is energetic, athletic and better defensively than he gets credit for — he defends very well in one-on-one situations. He played the best football of his career under Guardiola at Barcelona, becoming a key part of one of the greatest club sides of all time.

With the Catalan tactician's guidance, Alves revolutionised the role of right-back by not only supporting the attack in wide areas, but also cutting inside and acting as an advanced playmaker, linking with Lionel Messi and seeing as much of the ball as you’d expect of a central midfielder.

Do the reports come from a reliable source? 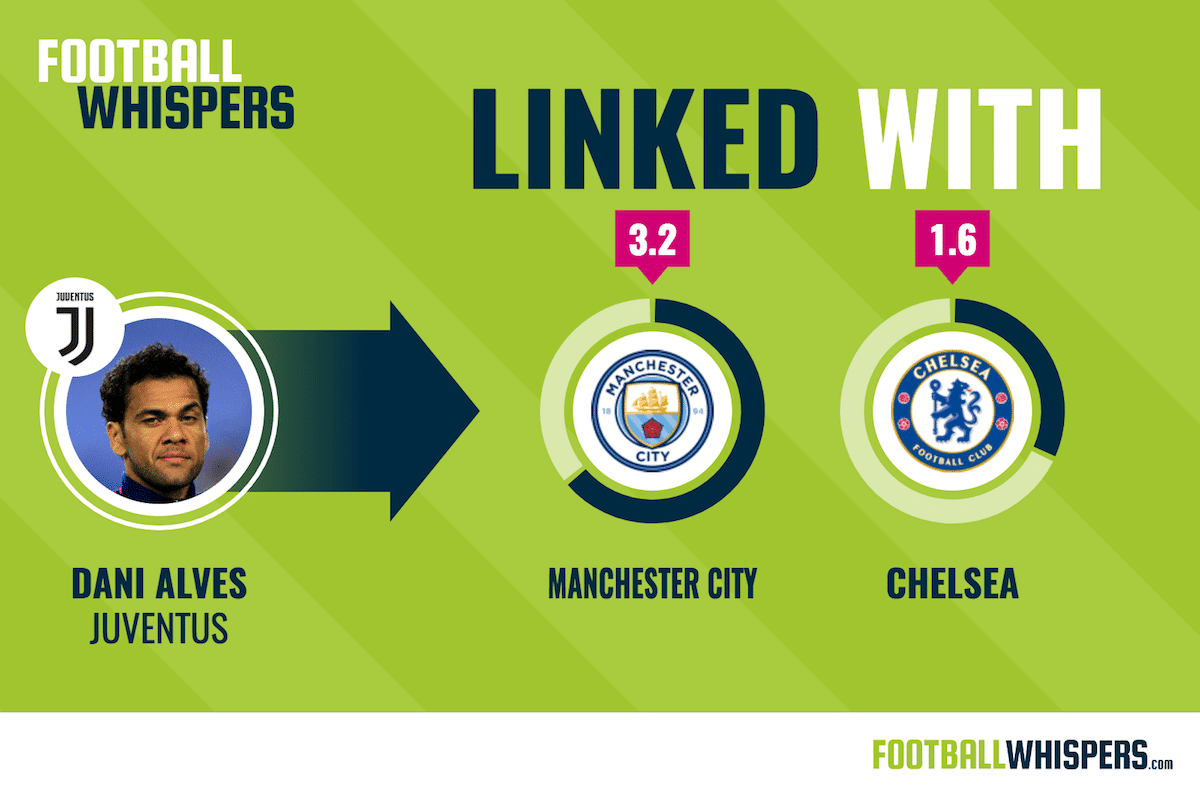 Italian journalist Fabrizio Romano reported yesterday in The Guardian that Alves was to meet with Juventus to make clear his intention to leave the club, while Sky  Sport Italia claim the Bianconeri are willing to allow the Brazilian to cancel his contract.

Even if Alves is unable to come to terms on the termination of his contract with Juventus, City can easily afford the mooted £5million transfer fee. Guardiola's summer spending will almost certainly run into the hundreds of millions, and the Citizens were already considering forking out £45million for Walker.

Alves' £85,000-per-week, two-year contract will also hardly make a dent on City's wage structure. Although that figure would rank him among the highest earners at most clubs, that certainly won't be the case on the blue side Manchester.

Would it be a good tactical fit?

Having spent four years under Guardiola's tutelage at Barcelona between 2008 and 2012, Alves is well aware of what the City boss demands of his full-backs, both physically and tactically.

Indeed, it was Alves who has formed the basis of what Guardiola has asked of his full-backs ever since.

Alves was one of Guardiola’s first major signings at Barcelona in 2008 when he joined the Blaugrana from Sevilla for around €32million.

The pair won a Treble in their first season working together in 2008/09, and would go on to win another two league titles and a Champions League in 2011, beating Manchester United 3-1 at Wembley. After their demolition of the 20-time English champions, then-Red Devils boss Sir Alex Ferguson said: “They're the best in Europe, no question about that.

“In my time as a manager, I would say they're the best team we've faced. Everyone acknowledges that and I accept that. It's not easy when you've been well beaten like that to think another way.

“No one has given us a hiding like that. It's a great moment for them. They deserve it because they play the right way and enjoy their football.”

Even with the money now at his disposal, it is unlikely that Guardiola will ever recreate the magic of that Barcelona side in Manchester, but signing Alves would be a big step towards shaping the team in his image.