While the influx of foreign stars to the Premier League shows no signs of abating, England’s biggest sides seem more willing than ever to dip into the EFL and mine the lower leagues for talented youngsters who could step up to the top flight.

In the last week James Justin has moved from Luton Town to Leicester City for a reported fee of up to £8million despite only playing in League Two as recently as 2018, and Birmingham City striker Che Adams has signed for Southampton after scoring 22 Championship goals last season. With teenage sensation Jack Clarke also swapping the white shirt of Leeds United for that of Tottenham Hotspur, it’s been a remarkable few days of transfer activity as far as the EFL is concerned.

Premier League clubs may once have been put off by the higher price tag associated with ‘buying British’, rather than importing players from less affluent leagues on the continent. But England’s top division is now awash with cash and teams are happy to speculate on youngsters plying their trade further down the pyramid.

We can surely expect more lower league prospects to follow in the footsteps of Justin, Adams and Clarke over the coming weeks of the transfer window, but who could be next in line for a move to the Premier League?

Here are three EFL stars who could be ready to make the step up this summer.

People who witnessed Dru Yearwood in action last season may question his inclusion in a list of the EFL’s top young players. There’s no denying that the 19-year-old central midfielder endured a difficult year, as injury-hit Southend United got sucked into a relegation battle at the foot of League One and he missed a chunk of the season with hamstring problems.

But to judge someone so young on a solitary campaign in a struggling side would be unwise – Yearwood burst onto the scene in 2017/18 and put in a string of scintillating performances, as his dynamic displays at the heart of Southend’s midfield helped drag the Shrimpers up from the lower reaches of mid-table to tenth place under former manager Chris Powell.

He will surely recapture his best form in a more stable side next season, if a club higher up the food chain doesn’t make a move for him first. Queens Park Rangers’ Director of Football Les Ferdinand has been spotted scouting Yearwood at Roots Hall, and the club turned down a somewhat derisory bid of £200,000 from League One new-boys Rotherham United this summer.

Southend are under no pressure to sell their hottest prospect, who is contracted until 2021, but they may find a significant offer from a Premier League club hard to resist. With 62 appearances already under his belt Yearwood has an impressive body of work to reflect upon over the past two seasons, but he may not play too many more games in a Southend shirt before one of the big boys comes calling. 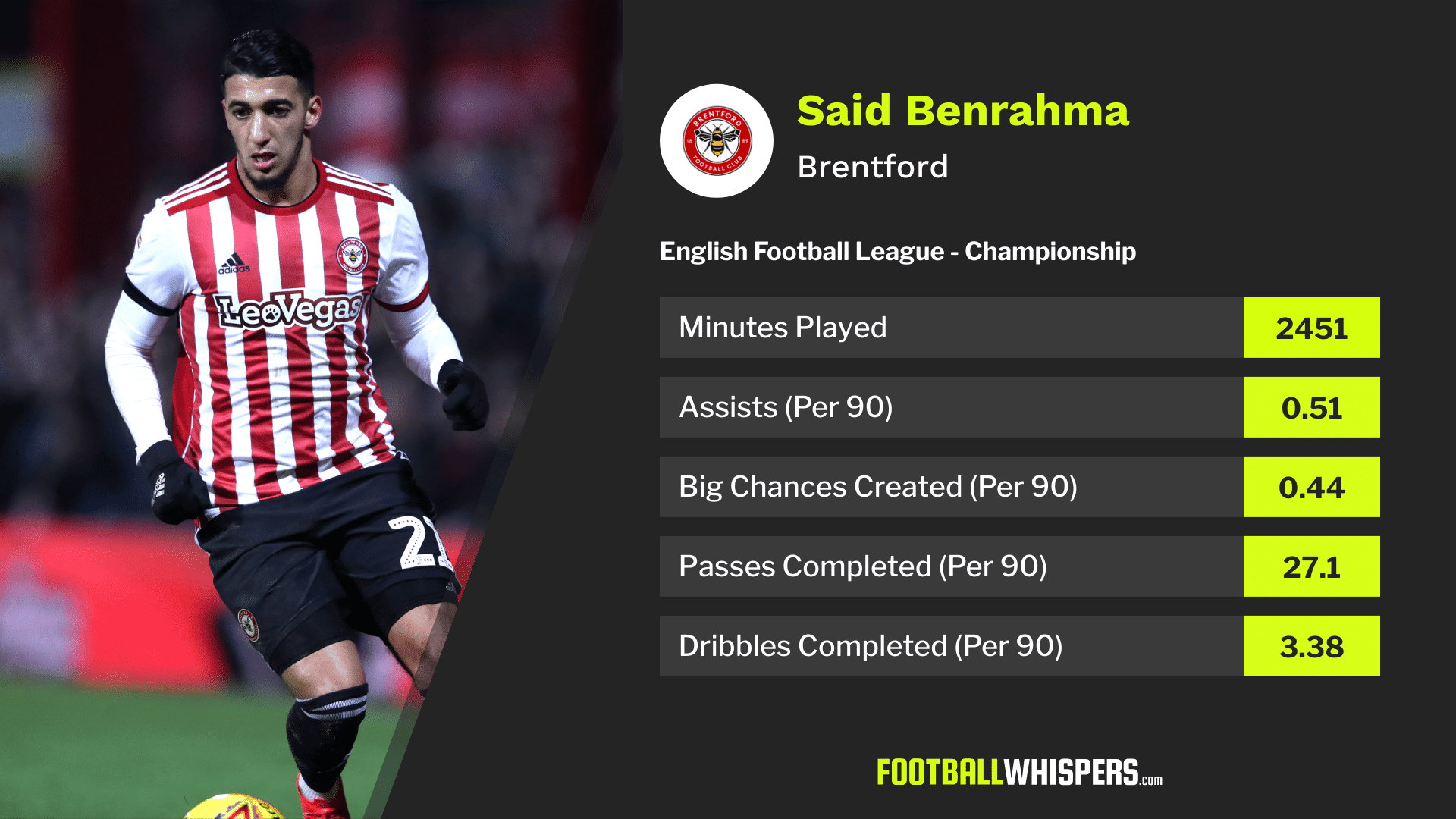 joined the Bees for an undisclosed fee (rumoured to be around £1.5 million) from French club Nice in July 2018.

The 23-year-old had struggled to make an impact on the French Riviera – appearing just 18 times in all competitions for Les Aiglons’ first team over three seasons, and spending much of his time at Nice out on loan or playing in the reserves.

It’s been a different story since Benrahma arrived in West London though. He set the Championship alight last season, scoring ten goals in 38 league appearances as his new side secured a comfortable top half finish.

The Algerian international also had the most assists of any forward in England’s second tier (14) in 2018/19, which included more assists from open play (10) than any other player in his position. The statistics make for excellent reading in a whole host of other categories too – Benrahma topped the rankings for the division’s forwards when it comes to cross completion, dribbles completed and completed passes per 90 minutes.

It’s no surprise then that Aston Villa have been linked with a £20million swoop for the right-sided winger. That would represent a healthy return on Brentford’s investment, and allow them to spend that money on the next ‘diamond in the rough’ that can be polished and sold on by the Bees. 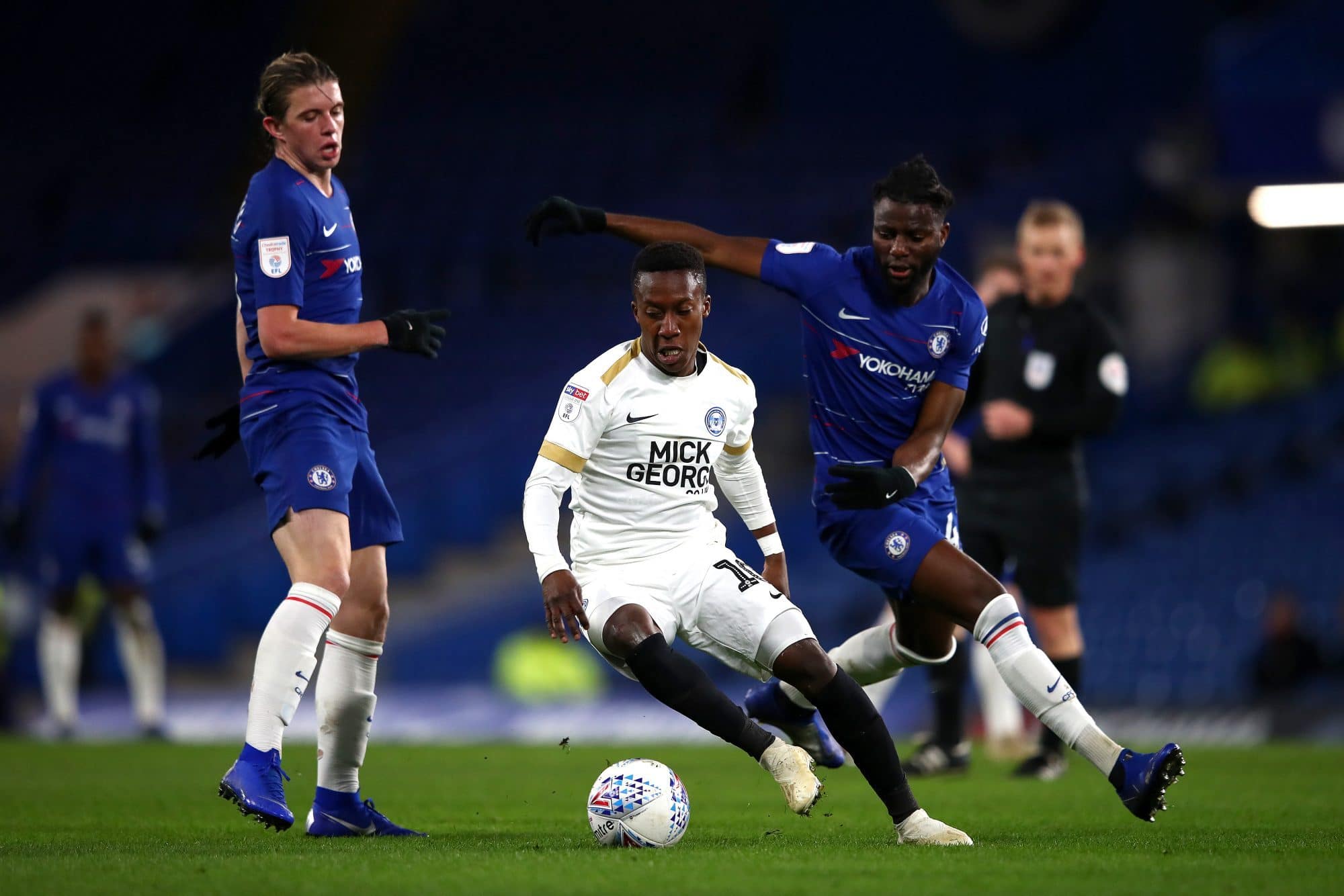 Twenty-two-year-old Siriki Dembélé’s route into professional football began in an unorthodox manner. The Ivorian winger’s career started in the Dundee United youth team, before a spell at the Nike Football Academy led to a contract with League Two Grimsby Town in 2017/18.

The diminutive wide player hasn’t looked back since and enjoyed a stellar rise to prominence at the Mariners, starting 39 matches in his debut season and helping the Lincolnshire club achieve League Two survival under rookie manager Michael Jolley.

Peterborough United continued their policy of signing lower league talent by bringing Dembélé to London Road last summer, but they had to part with a six-figure fee to secure the signature of League Two’s most talked about talent.

It has proved to be shrewd business by Peterborough’s director of football Barry Fry, who may well be looking to move the tricky forward on after an eye-catching 47 appearances and seven goals for the Posh.

Dembélé is an outstanding dribbler with bags of pace, who is comfortable playing out wide on the left or up front. Those attributes have attracted admiring glances from Swansea City as they look to replace Daniel James following his move to Manchester United.

It remains to be seen whether Peterborough’s latest lower league discovery will be heading for Wales, or whether a Premier League club could come calling for the remarkably talented youngster this summer.