While the Premier League failed to provide much in the way of late-season fireworks, we are braced for an absorbing FA Cup final between bitter rivals Manchester United and Chelsea, almost exactly ten years on from their Champions League final in Moscow.

José Mourinho and Antonio Conte have revived the antipathy between the two clubs this term thanks to several entertaining off-field exchanges and it is the recent war-of-words that add an extra layer of spice heading into the Wembley showpiece.

Of course, there is much more than just revenge over a touchline foe on offer here. This is widely believed to be Conte's final game in charge of Chelsea. The Italian is tipped to stand down and he will view the final as an opportunity for a perfect swansong; beating Mourinho and delivering a trophy in his last act as the Blues' boss.

Mourinho will be similarly amped up for Saturday's showdown. The Portuguese coach has been so heavily criticised this season that he felt compelled to defend his record as United boss in an extraordinary 12-minute monologue in March.

The erstwhile ‘Special One' has been forced to live in the shadow of Pep Guardiola this season but beating the team he helped become a Premier League heavyweight in the cup final after guiding United to their best league finish since Sir Alex Ferguson's retirement will serve as vindication for Mourinho.

Both managers know what to expect. Having faced each other five times in the league and cup over the past two seasons, Mourinho and Conte have had ample opportunity to scrutinise each other's styles.

Here, we look at where we think the FA Cup will be won and lost for United and Chelsea as they prepare to bring the curtain down on the English domestic season.

Each game is different, of course, but Conte, as a believer in the benefits of video analysis, will have reviewed clashes with United as part of his pre-match preparation.

In the most recent encounter, United's 2-1 victory at Old Trafford in February, Conte would have been heartened by one tactical takeaway from the game, how his players, particularly Eden Hazard and Willian, unnerved United's full-backs.

It proved extremely effective. Just after the half-hour mark, Chelsea broke with speed and purpose. Willian drove straight at the heart of United's midfield before finding Hazard on the right before continuing his run.

The Belgian drew in both Victor Lindelöf and Ashley Young before playing the perfect through ball to the Brazilian, who finished with aplomb. 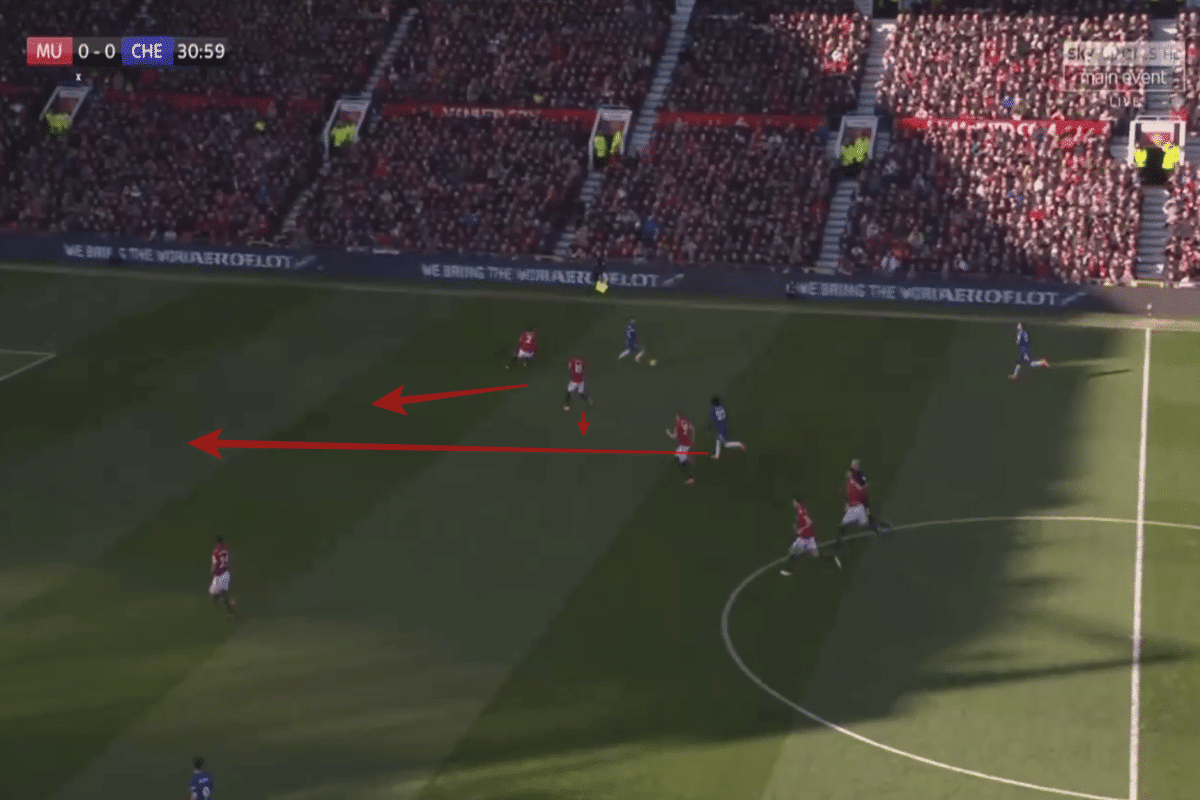 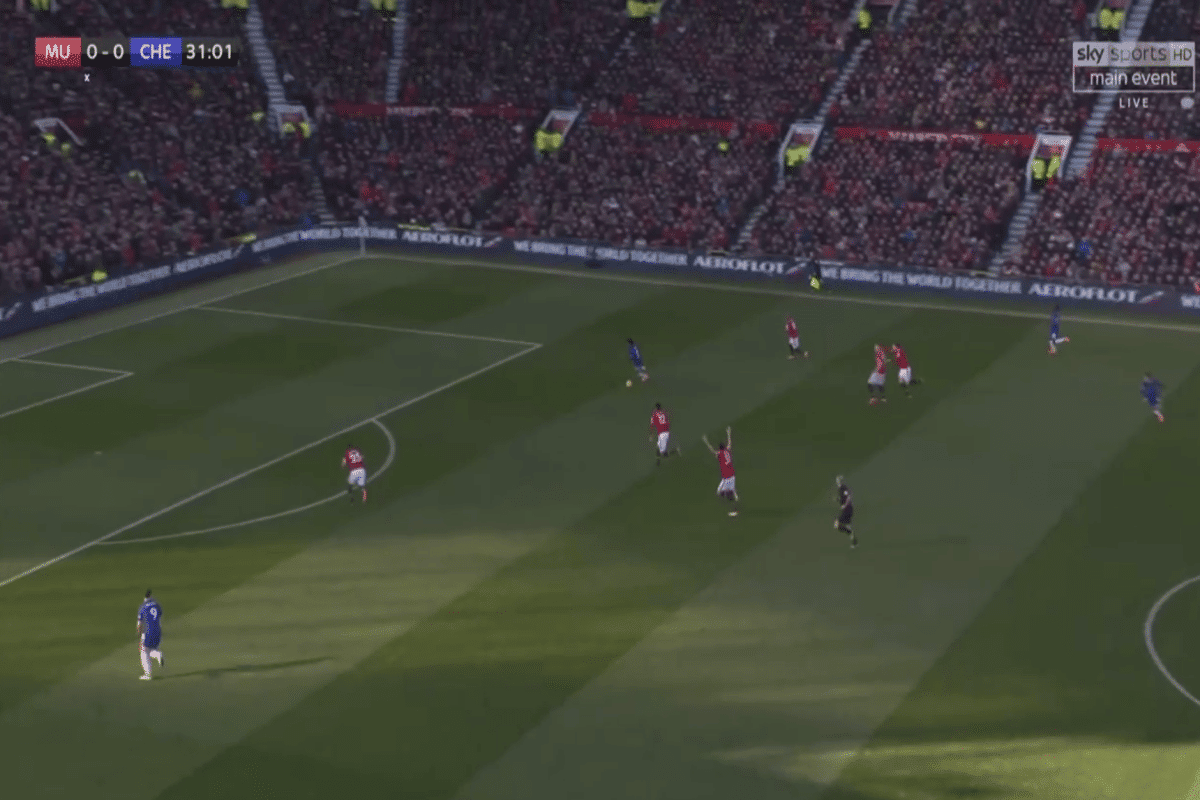 But that wasn't the only time Chelsea found joy in wide areas. After just four minutes, a quick-thinking Hazard switched the play out to Alonso on the left. With Valencia struggling to close him down, the Spaniard delivered for his fellow countryman Morata in the box, who volleyed onto the crossbar.

In recent weeks, Conte has experimented with a 3-5-1-1 as opposed to 3-4-2-1, with Hazard supporting the in-form Olivier Giroud as the lone striker. That has enabled the Italian to keep his wing-backs and add an extra central midfielder.

While having three midfielders may seem attractive to Conte, the speed and fluidity of Chelsea's attacks have been crucial in opening up the United defence in the past.

Mourinho will almost certainly start with Valencia and Young in the full-back positions on Saturday but, with Willian, Hazard, Moses and Alonso at his disposal, Conte has more than enough ammunition, particularly on the counter-attack, to hurt United.

Willian did not start the 3-0 defeat to Newcastle United on the final day of the league season, which suggests that Conte was resting the Brazilian before unleashing him at Wembley.

Hazard is one of the most devastating forwards in European football but has, in the past, been closely kept in check by Ander Herrera. The Spaniard has reduced the Belgian playmaker to the periphery of proceedings by adopting a rigorous man-marking tactic, as you can see below in the screenshots taken from United's victory over Chelsea in April 2017. 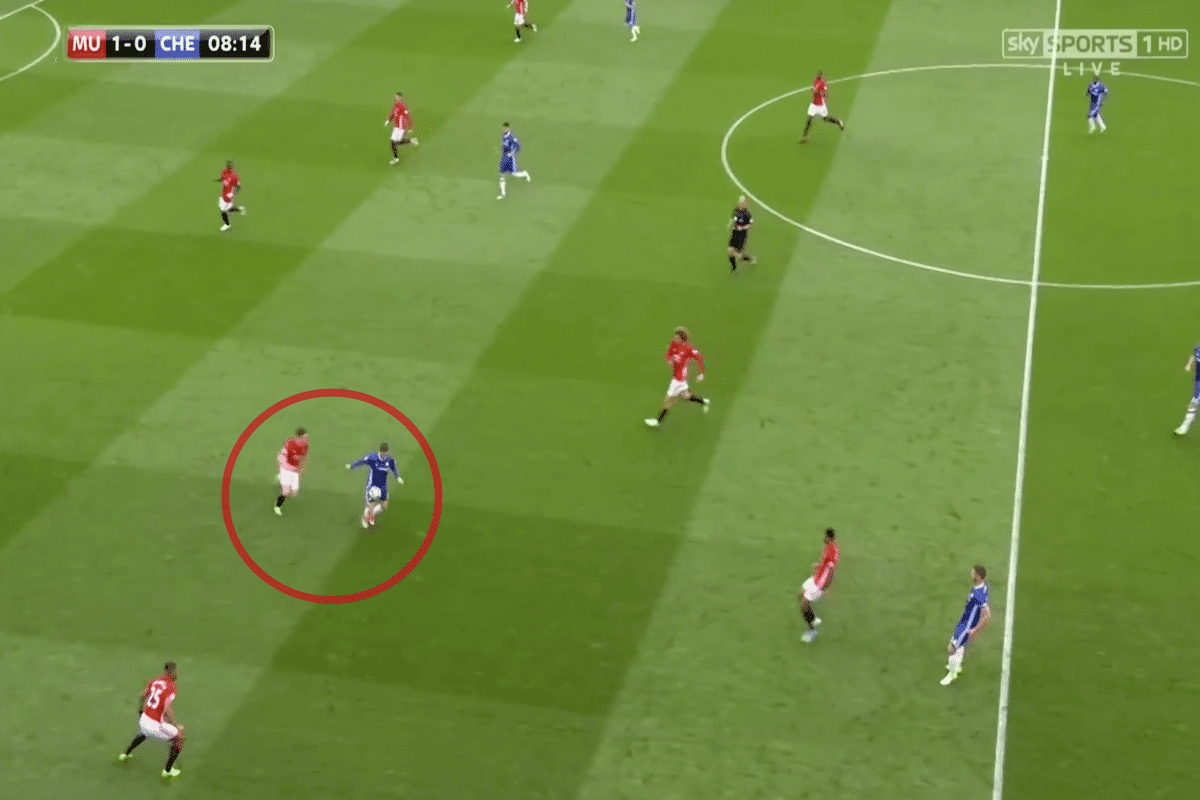 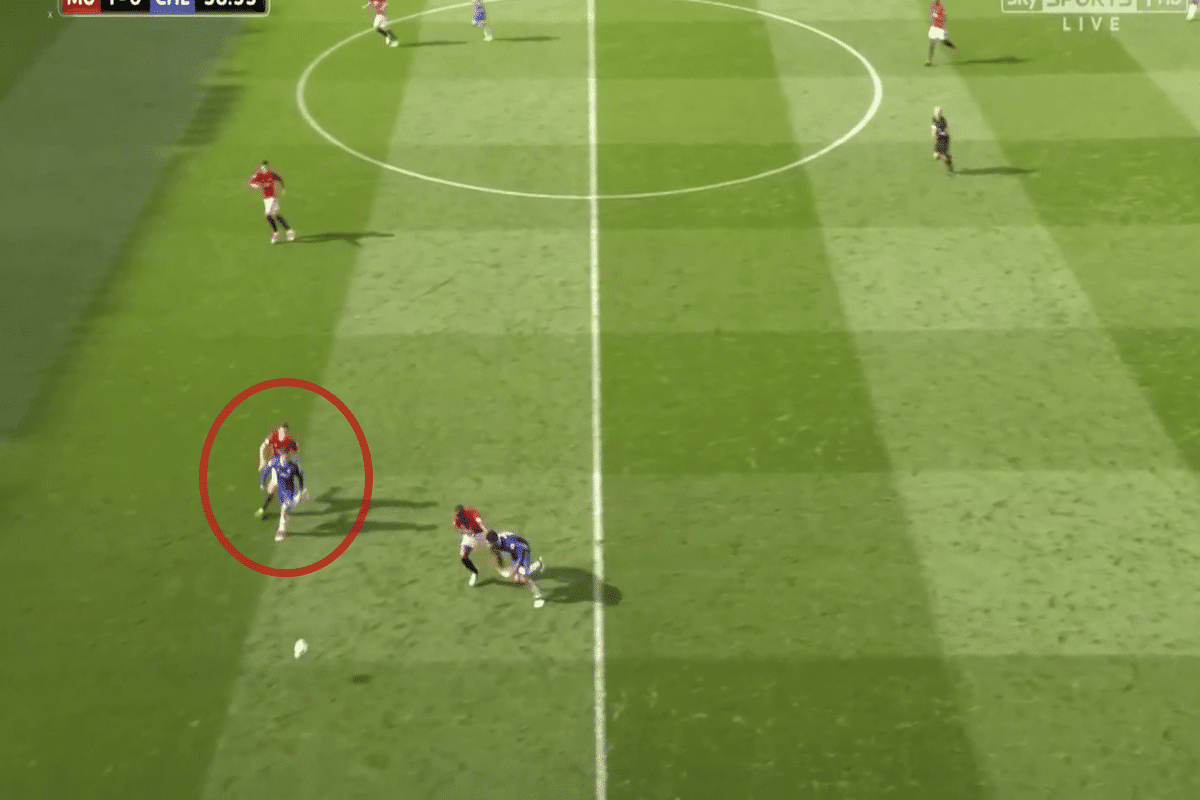 In that particular game, Hazard failed to shrug off Herrera's attentions but the Chelsea star can be more elusive when he's at his razor-sharp best.

When Chelsea beat United at Stamford Bridge in October, the 27-year-old was exceptional and, playing alongside Morata up top, was able to elude Herrera on several occasions as he pulled the strings in the Chelsea attack, while he was highly influential in the first half at Old Trafford a few months back.

Conte will certainly be hoping for more of the same come Saturday.

While Mourinho has faced intense scrutiny over his playing style at Old Trafford, the coach can point to five wins in six league and cup games against top-six sides since the turn of the year, including five victories in a row since losing 2-0 to Tottenham Hotspur in January.

Having beaten each of their closest rivals, though, Mourinho has certainly not lost his reputation as a big-game specialist. The Portuguese tactician may well plump for the same starting eleven that beat Spurs 2-1 in the semi-final.

United started slowly in that mach and fell behind to a Dele Alli goal, but they recovered strongly to win 2-1, controlling large parts of the second half. While Spurs are a different beast compared to Conte's Chelsea, Mourinho will feel he can trust the same personnel that got over the line against Mauricio Pochettino's side.

That means a 4-3-3 comprised of David De Gea; Valencia, Chris Smalling, Phil Jones, Young; Herrera, Nemanja Matić, Paul Pogba; Jesse Lingard, Romelu Lukaku and Alexis Sánchez. That same eleven also started in the win over Arsenal, while ten of them lined up in the comeback win against Manchester City in April, which suggests Mourinho has settled on them as his first-choice side.

Last time out against Chelsea, United created chances mainly down the left flank, with Young getting forward to support Anthony Martial, who has emerged as a Chelsea transfer target in recent weeks. However, despite setting up Lukaku's equaliser, Martial was hooked off for Jesse Lingard. While that may have seemed harsh on the Frenchman, United pressed much more effectively following Lingard's introduction.

When United began to press high on Chelsea, the Blues defence looked vulnerable and resorted to hitting long balls up to Morata, who became increasingly isolated as the game wore on. It seems feasible that Mourinho will instruct his players to conduct their business with a similar degree of intensity and aggression from the outset on Saturday.

No Lukaku may be blessing in disguise

Mourinho is sweating over Lukaku's fitness after the Belgian missed the final three league games of the season with an ankle injury. Lukaku's movement and aerial prowess will be key to United's attacking strategy against Chelsea, especially if Sánchez and Lingard are able to isolate Alonso and Moses.

Should Lukaku miss out, Mourinho may turn to Marcus Rashford with Martial's knee injury placing his participation in doubt. Without Lukaku, United are likely to rely more on intricate interplay around the box as opposed to firing crosses into Lukaku.

However, given that Chelsea's defence looked particularly vulnerable when dealing with aerial threats and set-pieces against Newcastle, Mourinho will know having his physically imposing Belgian fully fit could be them an edge going forward.

It won't be the end of the world, though. While Lukaku has enjoyed a solid first season at United, scoring 27 goals in 50 games, there have been suggestions that United attack with more verve and fluency when Lukaku isn't playing. 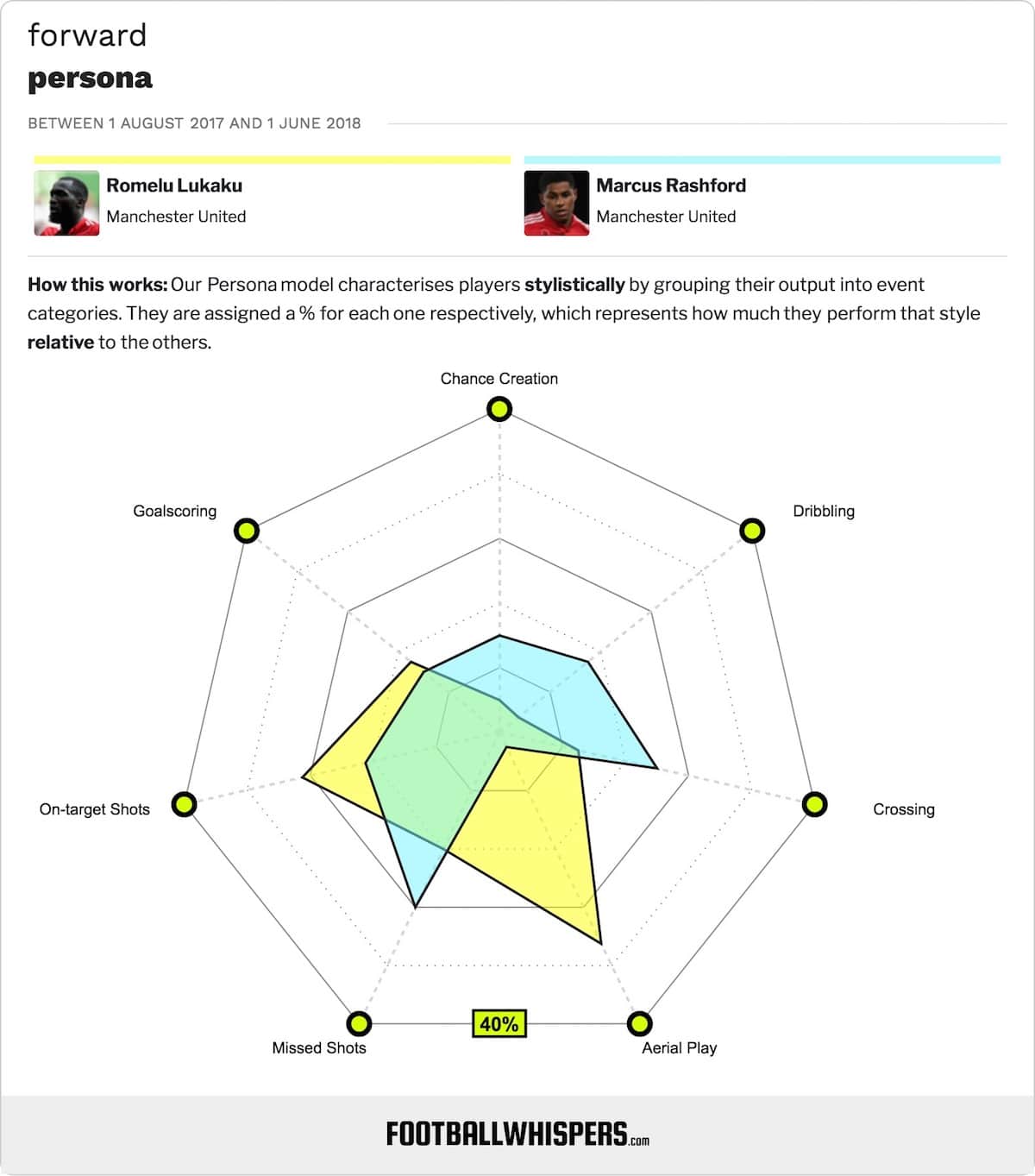 Most United fans will tell you that one of the most thrilling and impressive displays in the Mourinho era was the 2-0 win over Chelsea in April 2017, a fixture which pre-dated Lukaku's arrival of course.

Mourinho left Zlatan Ibrahimović and Henrikh Mkhitaryan on the bench that day in favour of sheer speed up top in the shape of Rashford and Lingard.

With a back three of Eric Bailly, Marcos Rojo and Matteo Darmian and a midfield trio Herrera, Marouane Fellaini and Pogba flanked by Young and Valencia, United tore through the Blues – then en route to being crowned champions – as the exuberant Rashford-Lingard connect up top offered a more exciting United in Mourinho's vision.

That victory was hailed as Mourinho ushering in a brighter, faster future for United, and while it hasn't quite panned out that way following the acquisition of Lukaku, the striker's absence could offer the manager another chance to carve Chelsea open with speed and precision.

Whatever way you look at it, it's Manchester United v Chelsea, it's the FA Cup final and it's Mourinho v Conte. Having lost to Arsenal in last year's final, Conte will be hungry for cup redemption but he will have to go through one of his most bitter rivals to sound off an otherwise trying season with a bang.