In the early 1980s Leicester City were a struggling outfit, a million miles away from the dizzy heights they have reached today; that’s why when they tried to sign one of the greatest payers on earth it sent shockwaves around the footballing world.

It’s January 1981. Ronald Reagan has just been sworn in as President of the United States, Peter Sutcliffe, also known as the “Yorkshire Ripper,” is in court charged with the murder of thirteen women, Dallas is about to air on television for the very first time while Leicester City are sitting 22nd in the First Division and facing certain relegation.

That winter hadn’t gone well for the Foxes under the guidance of former Rangers great Jock Wallace, a humiliating defeat at Exeter in the FA Cup, swifly followed by a 3-1 home defeat to Leeds had piled the pressure on a manager who was already under mounting pressure.

Jock Wallace was no mug and had enjoyed plenty of success in his managerial career up to now. He'd won the treble twice in Scotland with Rangers, but he knew that if he didn’t do something drastic he would soon be staring down the barrel rather like a certain Texan in a TV show which would soon be attracting 20 million viewers a week.

Wallace’s young City team had comfortably won promotion the previous season and burst into English football’s top flight thanks to the contribution of a number of local and home-grown players, but the big league had been something of a shock to the system and if they didn’t act fast they would soon be heading back to the depths of the second tier of English football as quickly as you could ask; “Who shot JR?”

As with so many teams who come up, only to go straight down again, you can have as many talented, young players as you want, but without the experience and knowledge of a more worldly-wide, senior player, a team can appear rudderless; drifting aimlessly without a skipper at the helm to guide them safety into port when conditions become treacherous.

So who would this father figure be? A washed-up journeyman who had made his name in English football whose final role in the game would be that of the experienced leader who could guide them away from the lower reaches of the First Division? Far from it.

If Wallace had his way it would be one of the greatest and most gifted footballers who ever graced the game, whose skill and flair had illuminated football throughout the world over the past two decades, as well as being one of the most elegant and graceful footballers ever to play the game. That man would be Johan Cruyff.

At 33, Cruyff wasn’t quite the player he’d been in his mid-20s, but a slightly over-the-hill Cruyff could still offer more than most players who were plying their trade in the English game in the early '80s. He may have quit international football four years previously but a stint in America’s NASL at the end of the 1970s had seen him score 14 goals in 27 games for the Los Angeles Aztecs – proving he still had something to offer.

He had been named Player of the Year in his first season in NASL but in truth the game in America didn’t suit the Dutch master and did little to satisfy his creative needs, and to say the standard was somewhat below him was being kind.

After a year in California with the Aztecs Cruyff crossed the country to join the Washington Diplomats, where he played a full season; but the anticipated boom in American soccer failed to materialise and the club eventually folded in 1981 after suffering huge financial losses, meaning they could no longer afford their greatest player and the two parted company.

One of the greatest players in the game was now in something of a predicament. He still had much to offer and, with the World Cup in Spain some 18 months away, he was keen to secure first team football at a level that would allow him to prove he was ready for one last swan-song in the international game.

Football was now on high alert that the services of a true legend were now available, without regular employment or a club he could call his own. For Leicester City and their ambitious manager this was all the encouragement they needed as they set about landing one of the most audacious signings the game had ever seen. 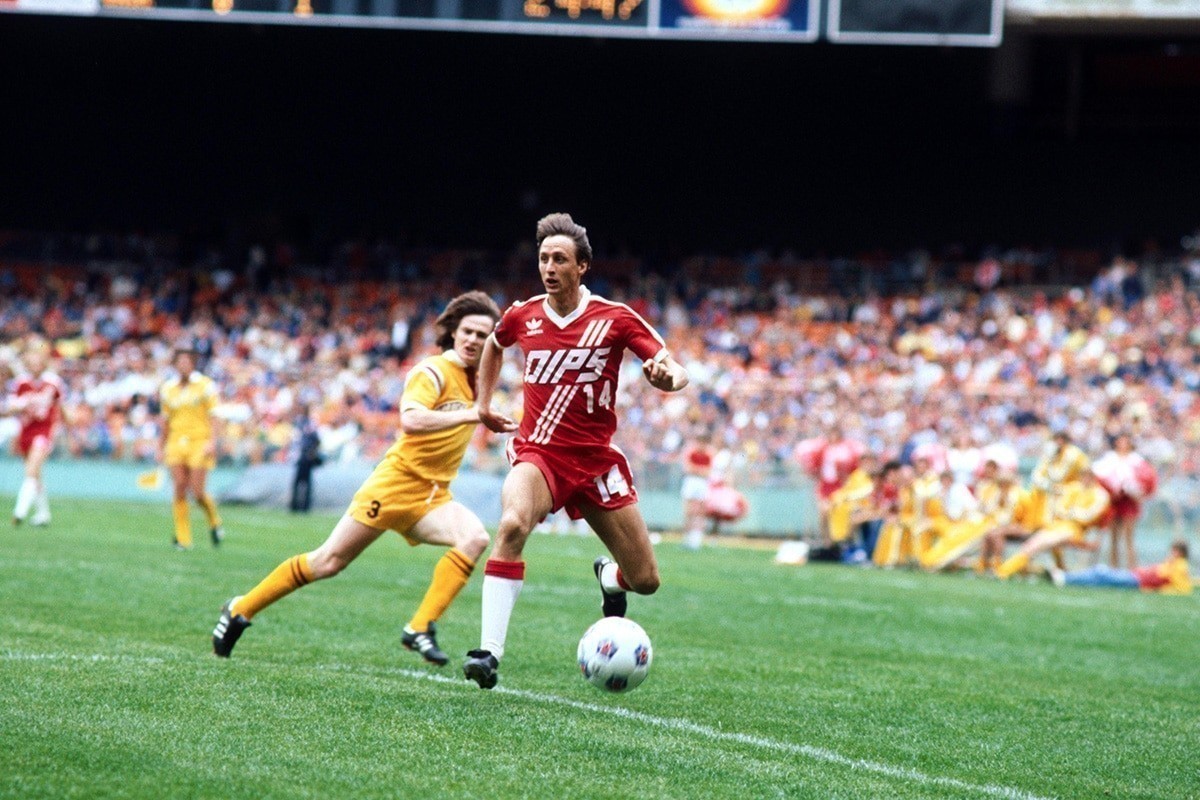 The move looked to be a realistic possibility for a number of reasons. There was no transfer fee involved for the player, though he would still be looking for high wages following a stint in the cash rich world of the NASL. He was also looking for a short-term contract, something that would have also suited City, who were looking for something of a quick fix at the time.

Cruyff was also seen by some as something of a maverick, a loose cannon and a player who would play for himself rather than the good of the team and had walked away from sides before when he felt the time was right. But again, this was not a concern for a club who weren’t necessarily looking for a long-term relationship.

All of this, combined with the fact that the NASL was considered by many as the knacker’s yard for former great players, meant that Europe’s top sides weren’t exactly beating a path to Cruyff’s door in order to offer him a contract, leaving the way clear for a struggling First Division side to get their man. However, there was another interested party who would also be making overtures in order to sign the legend.

Like Leicester, unfashionable Spanish side Levante was very much aware of Cruyff’s situation and were ready to pounce in their hour of need. The club was fourth in the Spanish second division but pushing hard for a promotion place and just a point off the pace. In all honesty they were probably of a similar standard to that of Leicester but they had one major advantage over those from the East Midlands – Cruyff had played in Spain before and was still a legend there.

The opportunity to return to the warm climate of Spain while guiding a relatively unknown outfit to La Liga appealed greatly to Cruyff, not to mention the prospect of bringing thousands back in through the turnstiles, something that would also help the club meet the huge wage demands he would no doubt bring with him.

But Leicester weren’t giving up easily and by coincidence Jock Wallace had remained on good terms with Cruyff after his Ajax side had faced Rangers in the 1973 European Super Cup, following the Gers’ successful European Cup Winners’ Cup campaign the previous year. Ever the opportunist he called his old adversary to convince him that a move to England was the right thing to do.

As Leicester embarked on a run of form which would see them record wins against Liverpool, Manchester United, Sunderland and Spurs to rise to 20th in the table and boosting their survival chances no-end, Cruyff had a decision to make when it came to his next and probably final move in football.

The question he had to answer was blunt if not simple. Either he would return to Spain and the adulation that he enjoyed so much in a move which would see him regularly facing poor opposition in the sunshine. Or, he could face a long cold winter in the English midlands, where he would pit his skills against some of the best players in Europe in a league he was yet to conquer, albeit on the mudbaths that most teams played on in those days.

And if it came down to money, the Leicester City board had a plan for that too. They would offer him a quarter of the gate receipts from a packed Filbert Street which would equate to a staggering £4,000 per match for 11 games, or £44,000 in total at a time when most players were only on a few hundred pounds a week. With the club confident a deal was as good as done the news began to leak out into the press and among City’s supporters.

“The pubs and clubs of Leicester were full of talk about Cruyff's possible arrival at Filbert Street,” City historian Dave Smith told the Leicester Mercury. “Although many fans thought it was a publicity stunt, Jock Wallace always insisted otherwise.”

However, in the days when print media was the only source of information available, by the time the ink had dried on the late edition of the Leicester Mercury there had already been another twist in proceedings. Cruyff had turned his back on Leicester at the last moment and decided to sign for Levante in a deal which would see him receive a fixed payment, a share of gate receipts and additional bonuses for performance and ultimately promotion.

“I have signed for Levante and do not mind at all playing in the second division,” claimed Cruyff in a statement that was riddled with contradictions. “I’ve decided to play for Levante because in this country I am living very well. The football is quality and the climate is also great. My life is not about money or prestige. This move offers me a chance to live well, collect a large sum of pesetas, and the ability to re-enter football in Europe.”

As Cruyff was trying to convince the press, and probably himself, that the move was the right one Leicester were trying to get over their disappointment and crack-on with the job in hand of avoiding relegation, something that was easier said than done.

They were unable to match their previous good form in what was left of the season and, despite some admirable performances, Wallace’s team won just four of their remaining 12 matches, finishing second from bottom and immediately returning to the Second Division.

Meanwhile many bitterly disappointed Foxes fans fully expected to read reports from Spain on how the player who had shunned them for a life of luxury in the sunshine was reaping the benefits of his late U-turn, thus justifying his decision not to challenge himself on the muddy, frost bitten pitches of Liverpool, Leicester and London. But things hadn’t actually worked out as planned for the Dutchman – probably to their delight.

For the remainder of that season he struggled badly with form and fitness as a toe injury blighted the rest of his campaign. He even intervened to ensure the coach he had fallen-out with was dismissed and in the nine games that remained his new club managed only two wins; with three games remaining dreams of a promotion to La Liga were now dashed.

And it wasn’t as though Cruyff would be laughing all the way to the bank following the move. Not only did he miss out on the huge performance bonuses on offer, as well as the extra payments for promotion, he was actually only paid a small amount of the original sum offered by Levante and soon left after making just 10 appearances.

Johan Cruyff remains a legend in the game to this day and nobody can doubt his contribution at both club and international level, but in a small corner of central-England he will be remembered as the man who turned his back on Leicester City in their hour of need, as Foxes fans still ponder what might have been had he signed for them back in 1981. As for whether Cruyff felt the same way up until his untimely death in 2016, we will never know.