It’s not often the case that you find a trio of players from the same nation conveying their style of play at the same club in a foreign league, but as long-time Inter Milan fans will remember that happened to be the case at their club during the late eighties/early nineties. At that point in time it would be the red and black side of Milan who were gaining much attention for their own Dutch trio of Ruud Gullit, Frank Rijkaard and Marco Van Basten, though Inter’s Andreas Brehme, Lothar Matthäus and Jürgen Klinsmann would bring a sense of autonomy to the Nerazzurri.

The eighties had been a tough period for Inter, as while Juventus and city rivals Milan enjoyed success both at home and abroad, the Nerazzurri were still attempting to rediscover their equilibrium enjoyed under the stewardship of wily Argentine tactician Helenio Herrera. The decade had begun well, winning the 1979-80 Serie A title, but it wouldn’t be until 1989 that the club would once again occupy the limelight. Led by Giovanni Trapattoni, Inter’s desire to taste success once more would take them to Bayern Munich, acquiring Brehme and Matthäus. The pair were not only integral to their club but also important components in the West Germany national team, and they would bring organisation and tactical astuteness to the club. Matthäus had developed a reputation for being a steely midfield general, the proprietor to a wealth of footballing intelligence that intertwined with drive and an eye for a goal. In comparison, Brehme was one of Europe’s top left-backs, equally adept at using either foot, regularly able to provide assists with his left while preferring to cut in and strike at goal with his right.

The 1988-89 season saw both individuals immediately become an integral part of the of Trapattoni’s team, making 63 appearances between them. The level of competition in Serie A at this time was extremely high, as not only were Juve and Milan strong propositions, but you also had a Napoli team led by the masterful Diego Maradona that was in the midst of their fabled period of success. But thankfully for Inter they could now boast a team that could compete with their rivals. While the goals of Aldo Serena and Ramón Diaz would receive the majority of plaudits, Matthäus’ contribution from midfield was equally vital. His goals and assist record were good, not great, though it would be a substantial mistake for one to judge him solely on these two factors. What Inter perhaps benefitted from more than anything was his understanding and reading of the game. The physical conditioning possessed by Matthäus helped underpin his overall game, allowing him to operate from box to box in a manner that soon became his trademark. 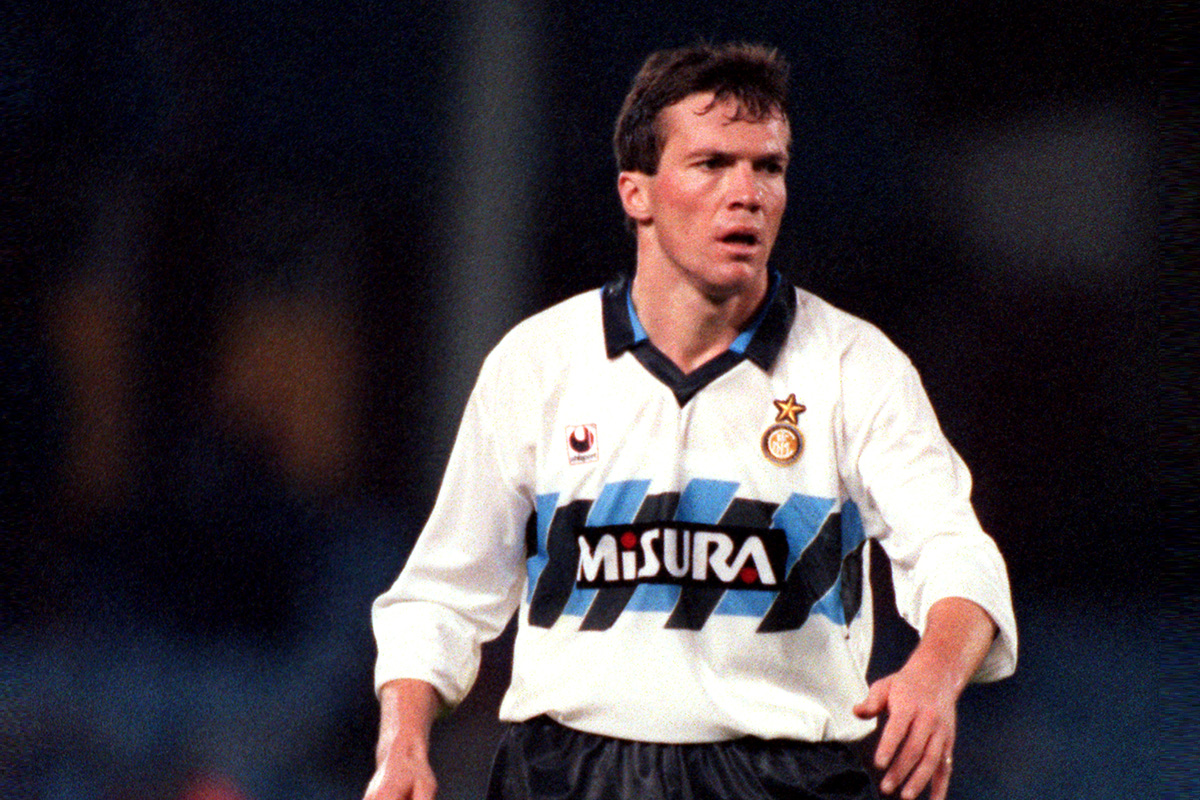 Brehme’s defensive perspicacity and consistency were important components in a back-four that included future club legend’s Giuseppe Baresi and Giuseppe Bergomi, conceding just 19 goals, a league-best. Inter would lose a mere two games en route to their 13th Scudetto, finishing 11 points ahead of Napoli. With the club hoping to fare well in the European Champions Cup, Germany would once more be their preferred shopping location, prising a highly regarded Klinsmann away from VfB Stuttgart. The forward had been named German Footballer of the Year for 1988-89, helping Die Roten to the UEFA Cup that season, where they would eventually lose to a Maradona-inspired Napoli.

With Klinsmann now completing the trio, the 1989-90 season promised to harvest further success for a team that had determined evolution, and not revolution, as the ideal approach for their assault on two fronts, with Matthäus and Brehme continuing to maintain their high level of performance. Although the midfielder featured in less games than the previous campaign [25] he did manage to hit double-figures in the scoring charts, finding the target on 11 occasions, while the defender was almost ever-present, with his six goals helping him live up to his reputation for being a defender with attacking instincts. While the technical nature of Serie A necessitated a period of acclimatisation for Klinsmann, the then 25 year-old still managed to end his debut season in Italy as Inter’s top goalscorer [13]. Klinsmann’s willingness to embrace Italian culture helped endear him to the fans, becoming one the country’s most popular foreign exponents. However, collectively Inter would not fear as well as they had done a year earlier, ending their title defence with a third place finish behind champions Napoli and runners-up Milan. Their return to the European Champions Cup would also end in disappointment, suffering defeat to Swedish side Malmö FF in the early rounds.

Despite their club season petering out, all three players would remain in their adopted homeland for West Germany’s assault on the 1990 FIFA World Cup. One game that stood out in particular was Die Mannschaft’s 4-1 thumping of Yugoslavia on 10 June, with the match being held at Inter’s Giuseppe Meazza stadium. West Germany’s accomplished display saw Matthäus demonstrate his array of attributes by finding the net twice – including an iconic effort that saw him power through the Yugoslavs before unleashing a ferocious shot – while Klinsmann was also on target. Matthäus would end the tournament with four goals, while Klinsmann and Brehme chipped in with three apiece, as West Germany claimed their third World Cup with victory over Argentina in the final. Matthäus’ individual performances would be recognised when being awarded the 1990 Ballon d’Or and 1991 FIFA World Player of the Year awards. 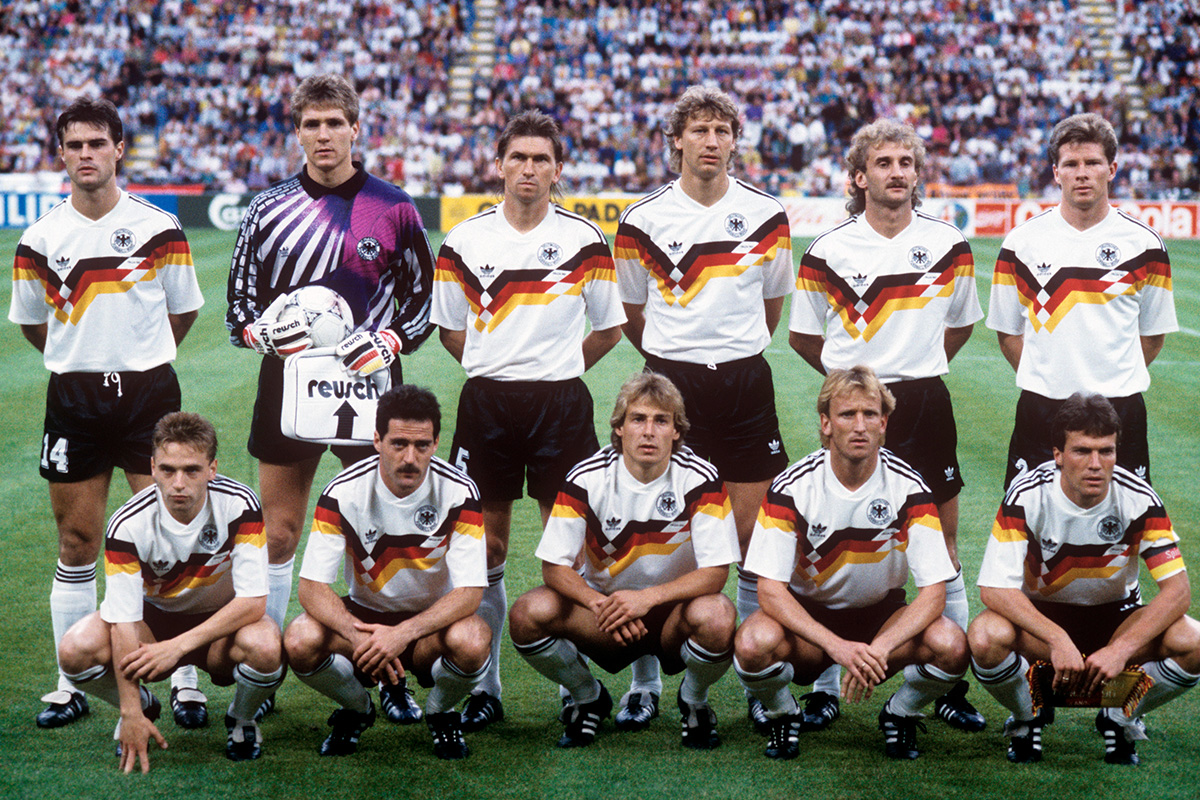 Returning to Inter as world champions, the trio were once more integral to their side’s hopes for a successful campaign. Along with Sampdoria and Milan, the Nerazzurri would be involved in a three-way battle for the Scudetto that the team from Genoa would come out on top from. This would prove to be Matthäus’ most prolific season, remarkably finishing as the club’s top scorer [16] and second in the Serie A scoring charts [behind 22-goal Sampdoria forward Gianluca Vialli], with Klinsmann again productive on 14. Though league success would elude them, all three would help propel Inter to a maiden UEFA Cup in 1991 following a 2-1 aggregate victory of AS Roma in an all-Italian affair. The achievement was also their first European trophy since back-to-back European Cup’s in 1964/65.

With Trapattoni having now departed for Juventus, Inter would turn to Corrado Orrico ahead of the 1991-92 season, and whereas it was hoped that his defence-minded approach could guide the club to an industrious campaign, Inter’s season failed to meet expectations. Brehme would continue to serve the club with distinction alongside defensive partners Baresi, Bergomi and goalkeeper Walter Zenga, but it would be a different tale from an attacking perspective, as the club would register a ungenerous 28 goals from 34 matches. Former striker Luis Suárez would return midway through the season to take over from Orrico, but the club would finish a disappointing eighth, 19 points behind champions Milan, with Matthäus and Klinsmann managing just 11 goals between them. This would prove to be the end of a fond era for Inter, as all three would leave at the end of the campaign, with Brehme headed for Spanish Club Real Zaragoza, while Matthäus returned to Bayern Munich. Klinsmann would move to France’s Ligue 1, joining principality club AS Monaco prior to an affectionate season in England with Tottenham Hotspur.

But even though their spell in Italy ended in an unsatisfying manner, Brehme, Matthäus and Klinsmann undoubtedly left their indelible mark on Internazionale. Between them the trio made over 300 appearances for the club at a point in time when Serie A led the way. The proficiencies of all three players enhanced the level of quality in Inter’s ranks, helping them once more compete at the highest level. Because of this, their contribution and influence will unlikely be forgotten.