Tonight’s Champions League Group A clash between Basel and Arsenal may have little bearing on which side progresses to the knockout stage, with the Gunners and Paris Saint Germain already assured of their place in the last-16.

But, aside from the fact that Arsenal will be fighting to top the group while Basel hope to leapfrog Ludogorets into third, the meeting between the Swiss champions and last season’s Premier League runners-up will also be a battle for supremacy and bragging rights within the Xhaka family.

Arsenal forked out £30 million to sign combative midfielder Granit Xhaka from Borussia Monchengladbach this summer, while defender Taulant Xhaka has been at Basel for more than a decade.

Of course, the Xhaka brothers are already used to facing off against one another. In June this year, the pair became the first siblings to play on opposing teams at the European Championships, with Granit representing Swizerland and Taulant, despite being born in Basel just like his younger brother, electing to play for Albania. 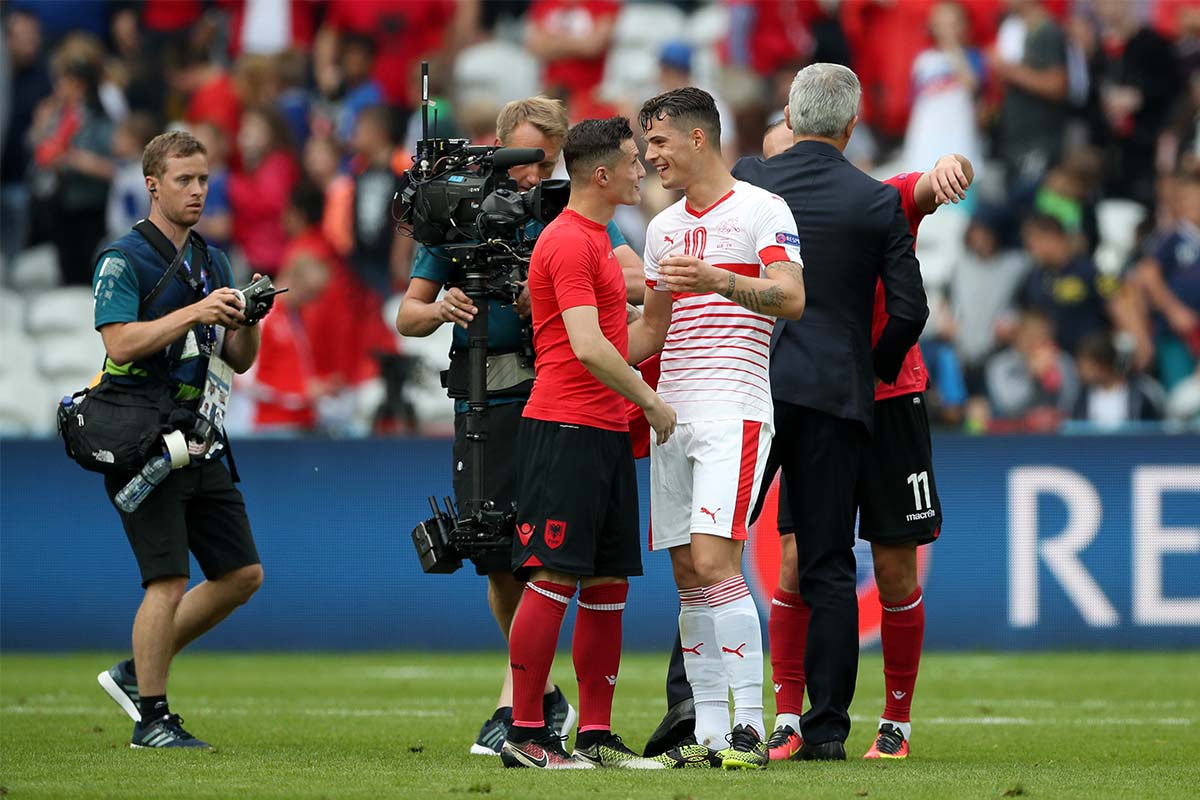 Granit came out on top on that occasion as the Swiss edged a tight encounter 1-0. Taulant showed no sign of going easy against his brother and the country of his birth, and was seen angrily throwing a water bottle after being substituted in the second half. The duo’s mother was in the stands for the game at the Stade Bollaert-Delelis wearing a t-shirt which combined the flags of both nations.

Though it is rare for two brothers to compete against one another for different countries, it is not entirely unprecedented. Half-brothers Jerome Boateng and Kevin Prince-Boateng play for Germany and Ghana respectively and are the first siblings to play opposite one another at a World Cup – something which they have now done twice.

Brothers Rafinha and Thiago Alcantara also represent different nations. Their father, Mazinho, was a professional footballer and a member of Brazil’s 1994 World Cup winning squad. Bayern Munich midfielder Thiago was born in Italy but elected to turn out for Spain at international level, having lived in the country since he was five. Two years Thiago’s junior, Barcelona star Rafinha was born in Sao Paolo, Brazil, and was part of the Selecao’s triumphant gold medal winning team at this summer’s Olympics. Though both full internationals, the Alcantara brothers are yet to face off on the international stage.

At club level, sibling rivalries are much more common. Perhaps the most famous example of the last 20 years are the Nevilles. Gary and Phil both graduated from Manchester United’s youth academy as part of the famous “Class of ’92” and went on to become first-team stars. 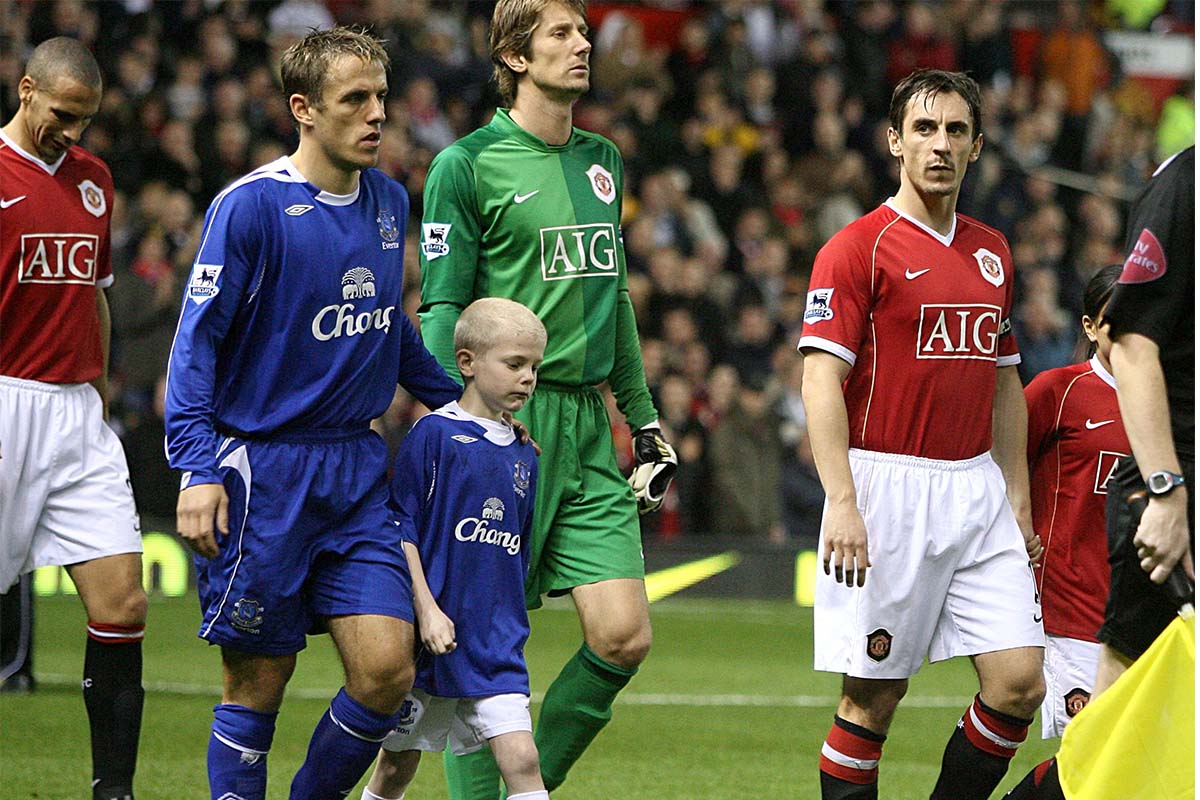 But Phil left Old Trafford to join Everton in 2005, meaning that he would have to play against his older brother for the first time. The pair would meet as opponents five times in the Premier League – with each brother captain of their respective team on two occasions. Their head-to-head record was a dead heat, with two wins apiece and one draw.

Another former Manchester United star, Rio Ferdinand, also came up against a sibling on several occasions. Anton Ferdinand took on his big brother several times while representing West Ham United, Sunderland and Queens Park Rangers in the Premier League. The two men would even have wagers with one another over who would score the most goals each season.

Kolo and Yaya Toure have experienced success as both rivals and team-mates at different points of their career. Defender Kolo made his name at Arsenal, where he was part of the Gunners’ great “Invincibles” team that won the Premier League without suffering a single defeat in the 2003-04 season. The pair became title winners together at Manchester City in 2012, but not before Yaya helped Pep Guardiola’s Barcelona win the Treble in 2009.

In one of the lesser-known sibling rivalries to be played out in the Premier League, defensive duo Andy and Michael Dawson came up against one another in February 2009 when Andy’s Hull City hosted Michael’s Tottenham Hotspur.

The younger of the Dawson brothers, Michael, was only an 89th minute substitute on that occasion, but both men played the full 90 minutes when the two sides met again in January 2010.

Just last season, Andre and Jordan Ayew went head to head for Swansea City and Aston Villa respectively. The Ghanaian pair come from fine stock as their father, Abedi Pele, represented Marseille, Lyon and Torino in the 1990s and is regarded as one of the greatest African players of all time.

In the first meeting of the Ayew brothers last term, both were on the scoresheet as Andre bagged a late winner for the Swans, while Jordan was unable to exact revenge later in the season as the South Wales side once again defeated the Villains.

Though they were team-mates at Marseille for several years, the Ayews got their first taste of what it was like to represent opposing teams during 2014-15 when Jordan moved to Lorient. Though Andre remains a Premier League player after moving to West Ham for £20.5 million this summer, Jordan is currently plying his trade in the Championship following Villa’s relegation. The brothers remain international colleagues as key players for Ghana.

Stories of footballing brothers on opposite teams stretch back as far as the game itself. Bobby and Jack Charlton are perhaps the most famous example. The pair from Ashington, Northumberland, both enjoyed tremendous success at club level – Bobby for Manchester United and Jack with Leeds United. Despite being on opposite sides of a heated rivalry, they came together to win the World Cup with England in 1966 – the same year Bobby won the prestigious Ballon d’Or.

As difficult and emotional as it can be when a family is divided by opposing club or international allegiances, on-field sibling rivalries can often stoke the competitive fires within the players involved, adding extra intrigue and motivation. Mrs. Xhaka might prefer to remain neutral, but her sons will be doing all they can to come out on top of their personl duel tonight.