The Reds went 422 days without a loss in the English top-flight and in the process equalled the record for consecutive wins with 18.

Jürgen Klopp’s side appeared unstoppable. For more than a year they were. But their dismantling at the hands of the Hornets revealed to the world they are, in fact, mere mortals. Just really skilled ones who deservedly have a 22-point lead at the Premier League summit.

Results don’t always tell the whole story. Liverpool’s performances over recent weeks have been a little off. The winter break didn’t derail the European champions' season, not by any stretch of the imagination, but it did affect their rhythm. Since returning from their fortnight off, the Reds have been in pre-season mode.

They eked out a 1-0 win over Norwich City, they lost to Atlético Madrid and needed a helping hand, or two, from Łukasz Fabiański to claim all three points against West Ham United. The Premier League leaders then mustered just one shot on target against Watford on Saturday in what was arguably the most one-sided defeat since Klopp’s appointment.

The Reds did enough to down Norwich and West Ham. But they weren’t as composed, comfortable or confident. Granted, the sample size isn’t the largest –just three league matches, but the drop-off in stats is too large to write off as nothing to be concerned by. 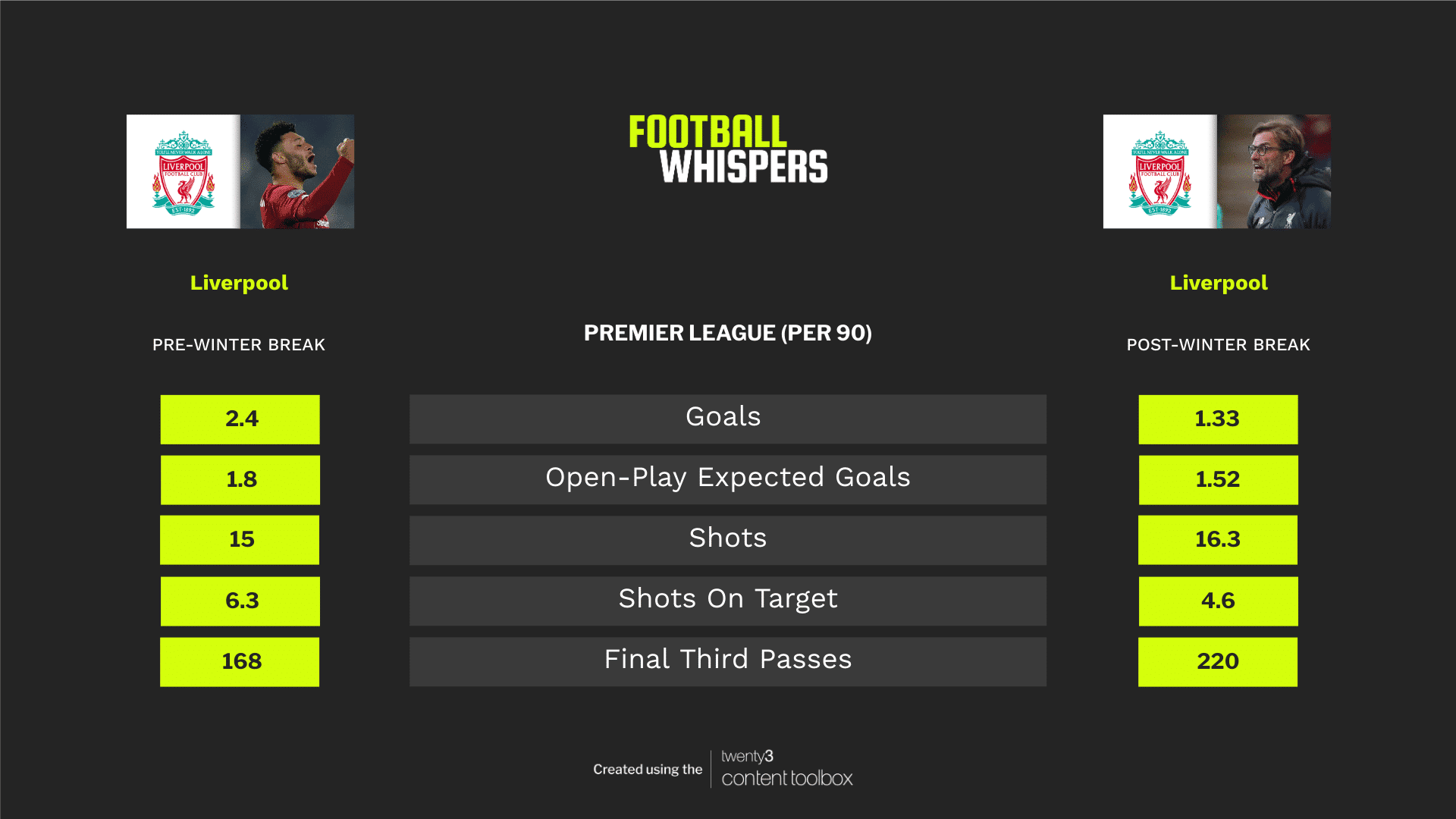 Before the inaugural winter break, the Reds averaged 2.4 goals per 90 from an open-play expected goals average of 1.8. They were taking 15 shots and landing 42 per cent on target. Liverpool weren't overly reliant on final-third passes for their chance creation, either, usually opting to play passes from deeper areas to get the attack involved.

In their last three matches, their averages have declined. Goals have dried up, with the table-toppers managing just 1.33 per 90. Open-play expected goals have dropped by 0.28 but the biggest takeaway from that is Liverpool are underperforming this metric. The Reds are usually famed for their overperformance, with Mohamed Salah and Sadio Mané often delivering with their shot selection.

Shots per 90 have risen from 15 to 16.3 but shots on target have fallen from the aforementioned 42 per cent to 28 per cent, while passes in the final third have spiked to 220.

That final stat is telling. It shows teams are sitting deeper and allowing Liverpool to have the ball there. The Reds are struggling to break down heir opponents and this is why there's been an increase in shots. Frustrated at having had lots of possession, players are taking low-value efforts and wasting what could be dangerous passages of play. It's clear in their shot maps below. Those in colour landed on target, the grey ones didn't. 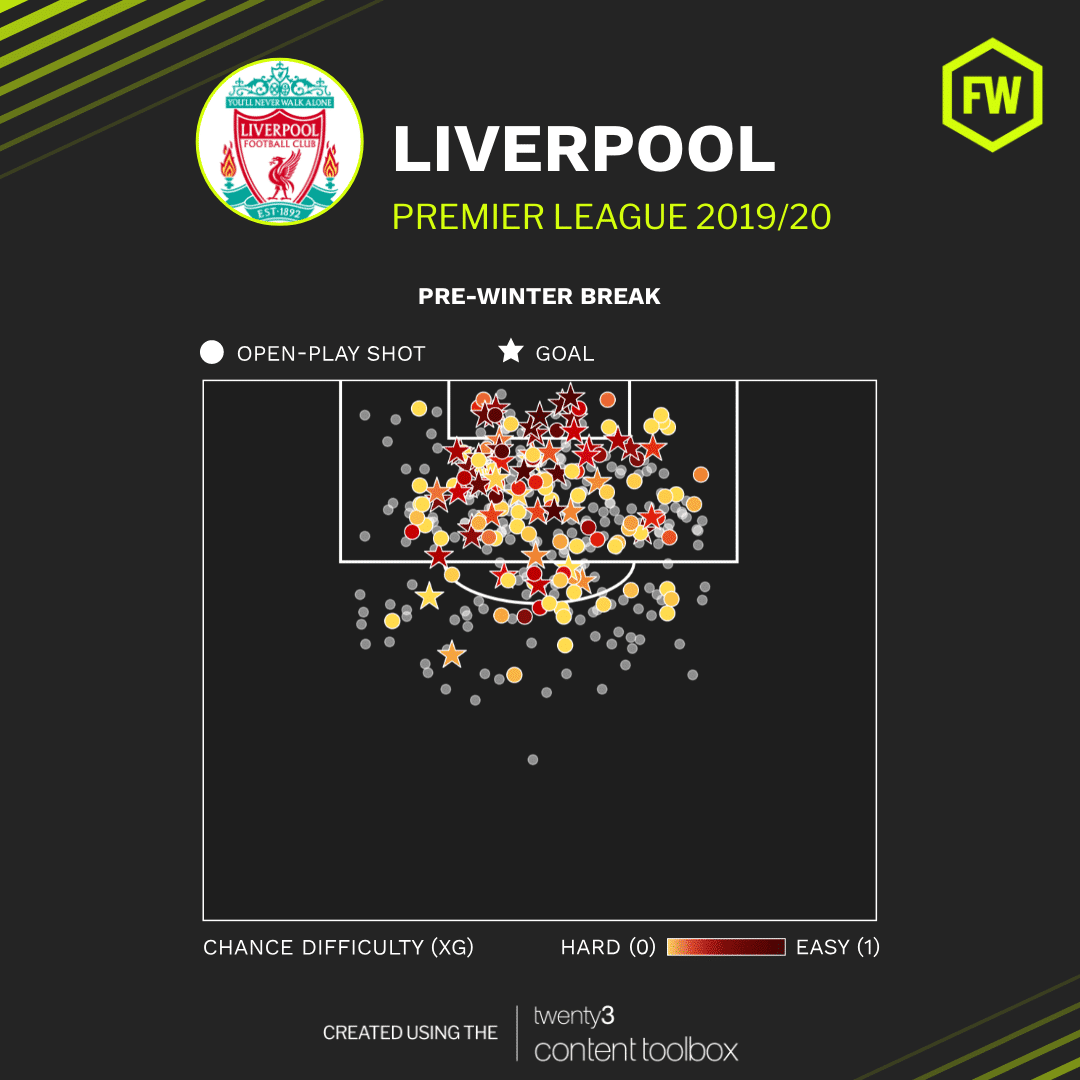 During their rampant surge to the top of the table, Liverpool peppered the opposition with efforts. However, as you can see above, few originated from outside the penalty box. The majority of shots, as expected, arrived within the width of the six-yard box. Of course, players occasionally try their luck from range but Liverpool largely worked the ball into better areas before looking to fire an effort goalwards.

It took a few years for this to become second nature to the players. In Klopp's early years at Anfield, Liverpool often dominated the ball, did nothing with it and Philippe Coutinho would grow frustrated before he started to shoot from 30+ yards.

This tend has begun to re-emerge over recent weeks. 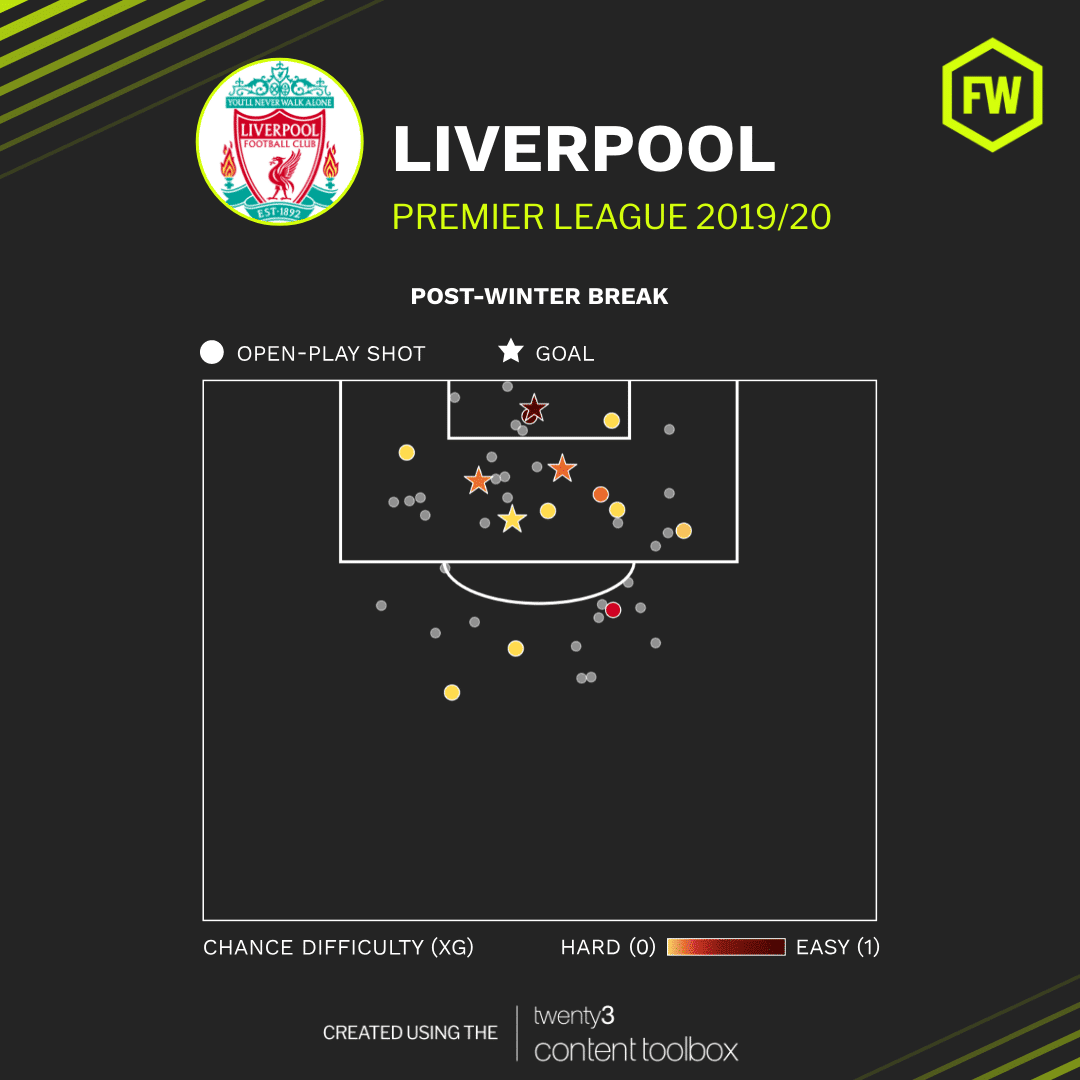 Their opponents are smothering play in their defensive third and they're forcing  Liverpool into taking lower-value efforts. The shot map above, which shows data post the winter break, doesn't make pretty viewing for fans.

The shots the Reds' are taking are worse in general, with numerous attempts coming from wider areas into the penalty box. In the key zone, that being the width of the six-yard box while in the area, Liverpool have taken 20 shots in three matches. Of those, only seven have hit the target.

They've taken 25 shots from positions that would be considered unfavourable, and only 20 per cent of those tested the goalkeeper.

Injuries haven't helped the champions-elect but Klopp and his coaching team need to address what is going on before this bad patch becomes the norm. A blip is fine in the position the Reds find themselves in. But struggling to create chances, that needs to be fixed ASAP, especially for a team who depend on attackers that rely on sheer volume to be effective.