Leicester City winning the Premier League title last season was one of the greatest fairy-tales in football history.

One of the factors that made the Foxes’ story so spectacular was that their remarkable rise from relegation fodder to title winners was imbued with a series of smaller, yet equally fascinating, individual fairy-tales.

There was Claudio Ranieri’s redemption from being a managerial punchline and dismissed as the “Tinkerman”; there was Kaspar Schmeichel emerging from his father’s shadow to achieve the kind of success that the Great Dane built a career on; Riyad Mahrez became the poster boy for the “Moneyball” approach after Leicester signed him from Le Havre in the French second division.

But chief among all the feel-good mini-stories that contributed to the wider narrative of Leicester’s title run was the rags to riches tale of Jamie Vardy.

After being plucked from non-league obscurity in 2012, Vardy transformed himself from a hard working yet limited forward, into one of the most dangerous strikers in England last season.

His tally of 24 goals from 38 games included a scoring run of 11 consecutive matches, breaking the divisional record previously held by Ruud van Nistelrooy.

Vardy’s exploits made him a hero at the King Power Stadium and a shoo-in for Roy Hodgson’s Euro 2016 England squad, as well as being named the FWA Footballer of the Year.

In the summer, Arsenal made a £20 million bid for the 29-year-old while he was on international duty with the Three Lions. The offer triggered Vardy’s contractual release clause but, after some deliberation, he decided to shun the Gunners’ advances and help the Foxes on their Champions League adventure, much to the delight of all Leicester fans.

So, what has changed? Has Vardy regressed to his pre-2015-16 level, or have opposing teams simply figured out how to play against him?

The truth is probably some combination of both.

Leicester last season were a perfect storm of organisation, resilience and work ethic, capitalising on a time when the established elite were all either out of sorts or in transition. Through the smallest of openings, they clawed their way to the most unbelievable triumph.

Vardy epitomised his club’s plight, both in terms of his attributes on the field and his unbreakable will to manifest a reality that seemed impossible just a few months earlier. 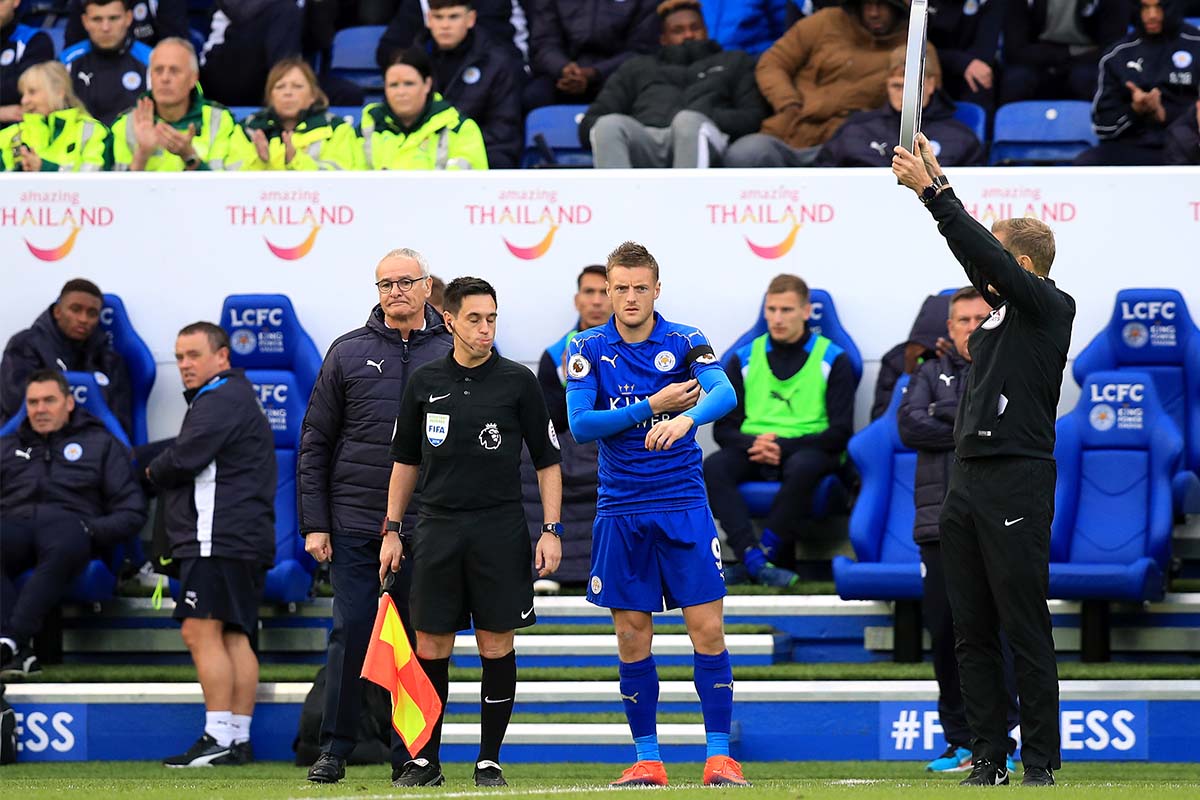 No player was better suited to being the focal point of Leicester’s rise than the man who was still playing for Fleetwood town at 25, an age by which most footballers who are not first-team regulars at the top level begin to slide down the league pyramid; Vardy did the exact opposite.

And, stylistically, the 13-cap England star’s pace, finishing and hard-running was a perfect fit for Ranieri’s counter-attacking system. Scoring chances would not always be plentiful, but Vardy could be relied upon to make them count.

Things have changed for Leicester this season, though. Their squad was not dismantled in the way many anticipated, with the so-called “big clubs” swooping to snatch away their most notable title-winning heroes, but they did lose midfield dynamo N’Golo Kanté to Chelsea; the Frenchman’s almost unhuman level of effort and energy was a vital cog in the Foxes’ machine.

And, as Premier League champions, Leicester are no longer considered the plucky underdog. Ranieri’s men are now subject to the full scrutiny of a serious title contender when opposition managers scout and plan their approach before facing them.

Now savvy to Leicester’s over-willingness to cede possession and play on the counter, teams deny the Foxes of the kind of space in behind that they need in order to execute the gameplan that proved so successful last season.

To that end, Vardy is stifled. The space in behind a high defensive line was his currency last season, take that away and the Sheffield-born striker is less of a goal threat.

Vardy also benefitted from being partnered with Shinji Okazaki last term. The Japanese forward’s industry and selflessness went largely unheralded, but the 30-year-old was a buzzing nuisance to opposing defenders and acted as the perfect foil for the England man.

This season, Okazaki has made just six starts, with record signing Islam Slimani the preferred option to lead the line. The Algerian, who was signed from Sporting Club de Portugal for £28 million this summer, is an archetypal penalty box poacher – a near polar opposite to the 103-cap Japan international. 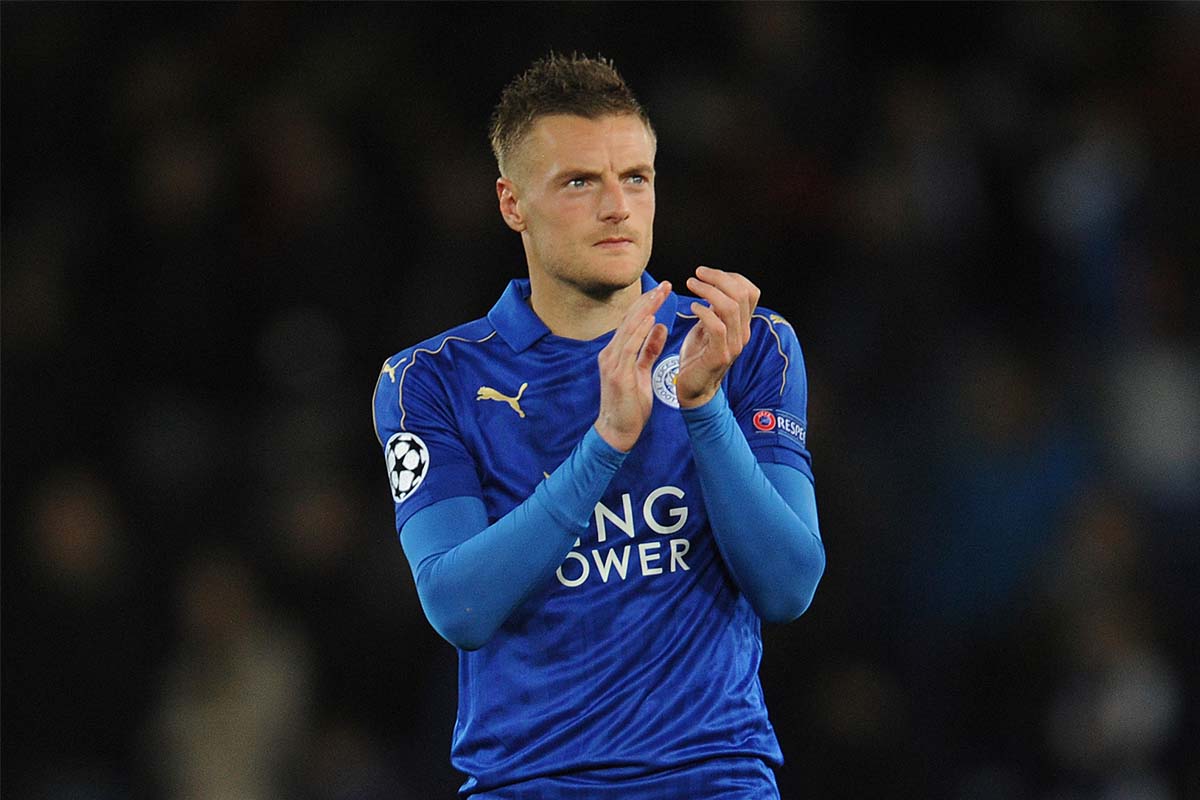 When playing alongside Slimani, Vardy is forced to adjust his playing style. Whereas last season, the former Fleetwood Town player thrived when playing “on the shoulder” of the deepest defender, that space is now taken up by Slimani, so Vardy instead has to operate in the channels or in slightly deeper zones, taking him further from the opposition’s goal.

Despite a reduction in goals, Vardy’s numbers for the season so far are still fairly strong. His passing accuracy is up to 66.5 percent from 65.8 percent last term; he is committing fewer fouls per game with 0.5 compared to 1.2; and he is winning a similar number of aerial duels with 2.5 per game to last season’s 2.6.

But there are reasons for concern within his statistics too. Vardy’s shots per game average has reduced from 3.2 to just 1.3 – this could be partly evidence of his altered role, but may also betray a lack of confidence. And he is attempting fewer dribbles in each match (from 1.1 to 0.4) and making fewer key passes (0.7, down from 1.3).

With the presence of Slimani as Leicester’s new attacking spearhead, the Foxes’ number 9 would not be expected to replicate his goal-scoring feats of last season.

But with his work-rate and skill-set – and if he is able to recover some of the confidence he appears to be lacking at the moment – Vardy could yet play a key role in helping the Premier League champions climb back up the table.