It’s fair to say Jordi Alba’s season hasn’t panned out like he would have wanted.

He played 45 games last season, including 31 in LaLiga.

But with just three games left for Barcelona in the league this season, the 28-year-old left-back has featured considerably less.

He has been linked with moves away from Barcelona and has been subject of Chelsea and Manchester United transfer rumours.

From someone who was a guaranteed starter a year ago, it feels like his time at the Camp Nou may be coming to an end.

Since Dani Alves’ departure to Juventus last summer, it feels like full-backs have become a major issue for Barcelona.

On the right, neither Sergi Roberto nor Aleix Vidal managed to properly impress or make the spot their own for a prolonged period.

It would be a surprise if Barcelona don’t dip into the transfer market for a right-back in the summer due to their issues there.

And with Alves offering such a potent threat going forward, that neither Roberto or Vidal properly have, it appears to have fallen to Alba to provide this. 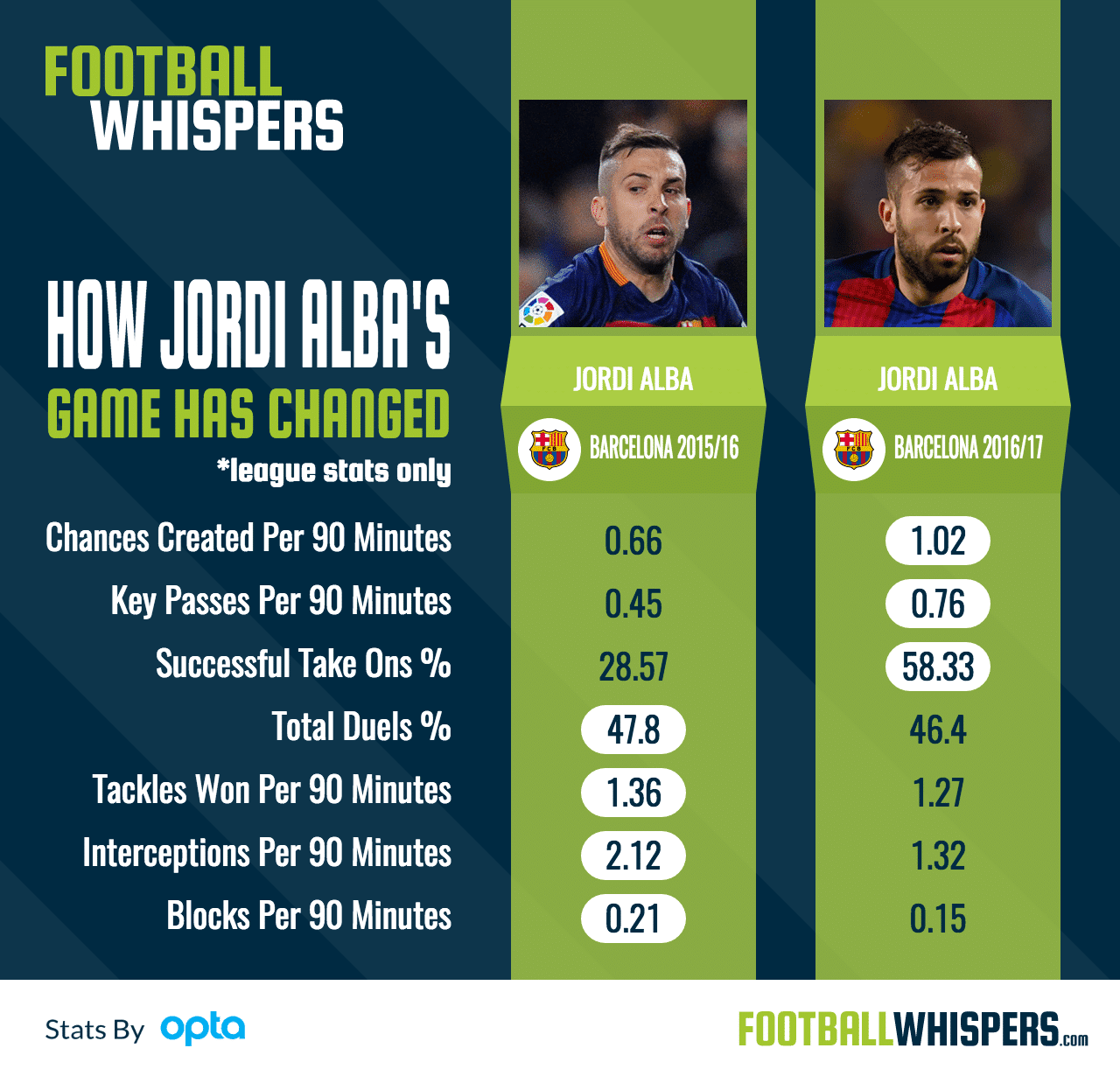 But this has meant the defensive side of his game has slipped.

And while he is needed going forward, with the issues at right-back and his weakening defensive role, manager Luis Enrique decided to switch to 3-4-3 after that heavy defeat in the Champions League to Paris Saint-Germain.

While he has since switched back to four at the back, when he was playing 3-4-3, there was no role for Alba.

And this clearly affected his confidence.

When he went on international duty in March, he showed how unhappy he was at being dropped, saying: “I have the complete confidence of the boss here, which for me is a compliment and fills me with confidence, something I’m not having at Barcelona, which maybe I’d like to have.”

He has since returned to the starting lineup but there are still question marks over his future.

What next for Alba?

Our Whispers Index has two possible destinations for Alba at the moment, should his career at Barcelona be up.

Chelsea are at 2.0, while Manchester United are at 1.0 on the index. 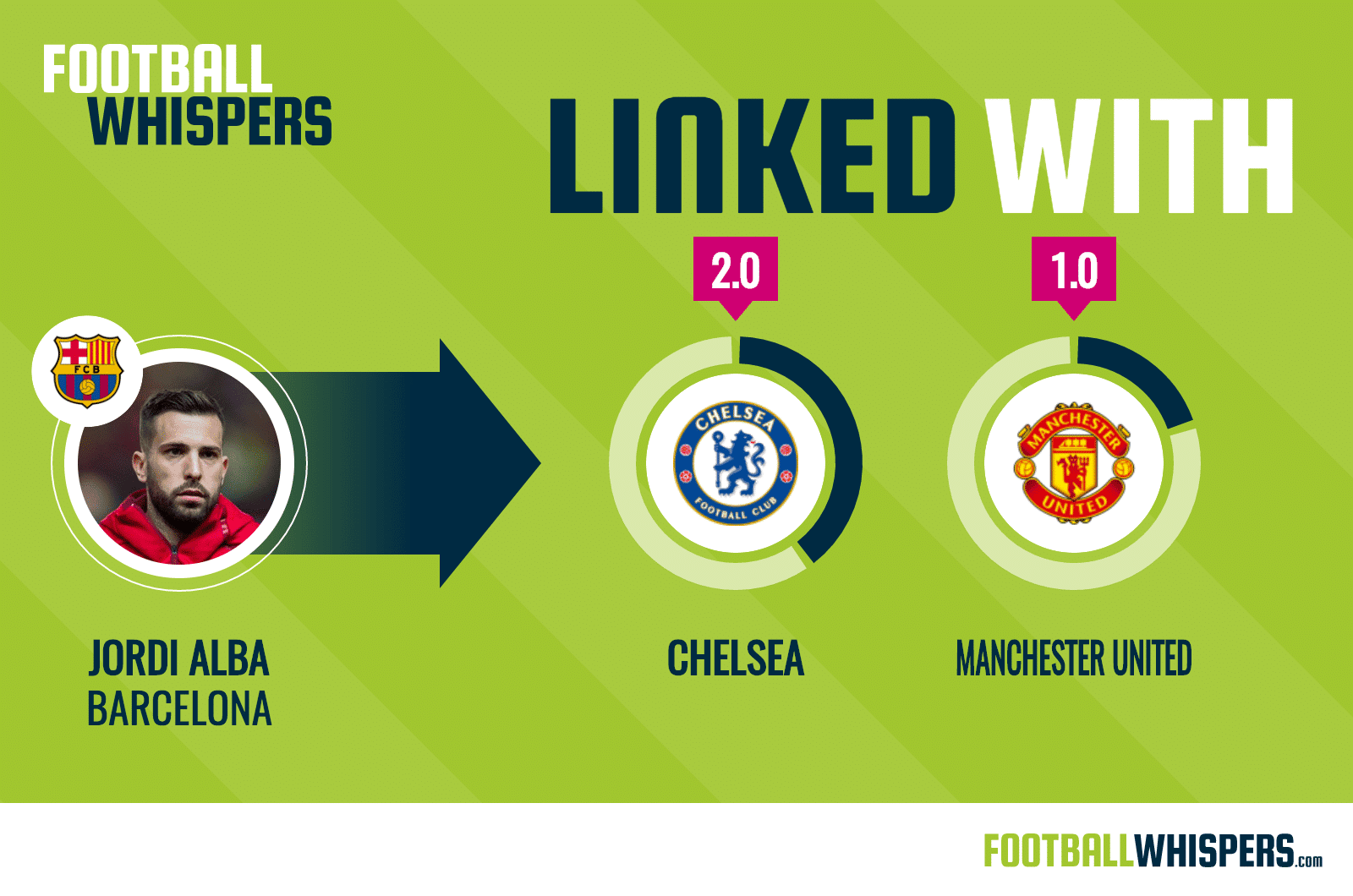 There is no doubt though that what he wants for the moment is see out his contract, which currently runs until 2020.

“I have a contract, my hope has always been to play here, my intention is to stay for many more years,” he said after the 3-0 win over Espanyol at the weekend.

“It’s my home and the club where I started, I have been here for five years, giving my all and while it’s like this I will stay here.”

But he admits he has found his reduced role frustrating, and that is a sign to the Barça board that all is not necessarily well with Alba.

“A player always wants to play as much as possible, this season I haven’t played all the minutes I would have liked to but I’m not going to ask for explanations, it’s clear I’d like to play more,” he added.

“It’s clear that everything goes through your head when you are in a situation like that [being benched] and for me it was new.

“I’m not use to it but it helped me mature and evaluate things more.

“The change of system had an influence but there are the coach’s decisions, whether I like it more or less, I have to accept it.”

And although he may want to stay, Enrique’s replacement may see no place for him in his starting lineup.

Why would Barcelona sell him?

If you compare Alba’s league statistics this year to the left-backs of the rest of the top four – that is Marcelo from Sergio Escudero from Sevilla – he doesn’t look particularly impressive. 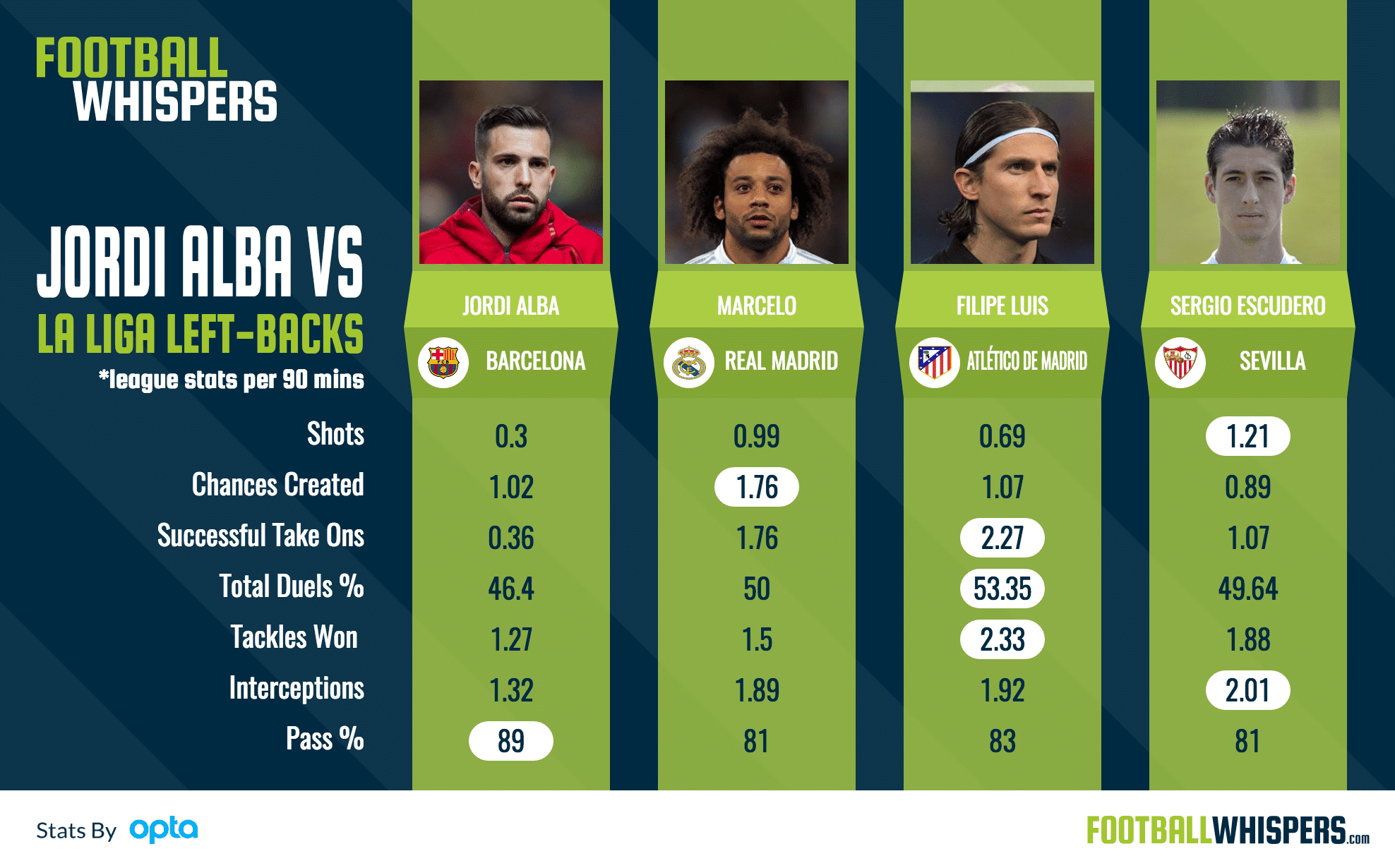 His pass completion rate is much higher than any of the other three, as you would hope from a Barcelona player.

Barcelona would hope their left-back would be doing better than that statistically.

And while Alba may want to stay, with Théo Hernández a reported Barcelona transfer target, the Spanish international's time at the Camp Nou may well be up.