The wheels haven’t come off at Chelsea but manager Frank Lampard is now being tested for the first time in his brief Blues tenure.

It wasn’t long ago the West Londoners won seven on the bounce in all competitions, losing just once in 11 matches. They climbed the Premier League table and appeared, to the surprise of many, to be genuine contenders for a top-four finish.

However, November wasn’t kind to the former midfielder and December hasn’t been much better. Chelsea are still fourth, but find themselves just three points ahead of a resurgent Tottenham Hotspur side managed by former Chelsea legend José Mourinho.

Lampard’s side have won just two of their last seven matches, home games against Aston Villa and Lille, and during this run they’ve managed to lose against West Ham United, Everton and Bournemouth. Domestically, they’ve won just one of their last five in the English top-flight and are now six points behind third-placed Manchester City.

The pressure isn’t mounting on Lampard but the honeymoon period is as good as over. He has credit banked but a big test of his managerial ability will be how he drags the team out of this bad patch of form. To do this, they need to get to the bottom of what has gone wrong.

On the surface, it appears the goals have dried up. In the seven matches following the 2-0 win over Crystal Palace, Chelsea have managed just eight goals. On a per 90 basis, this is 1.14 goals. For context, over a 38-game season, that average would see them score just 43 goals. 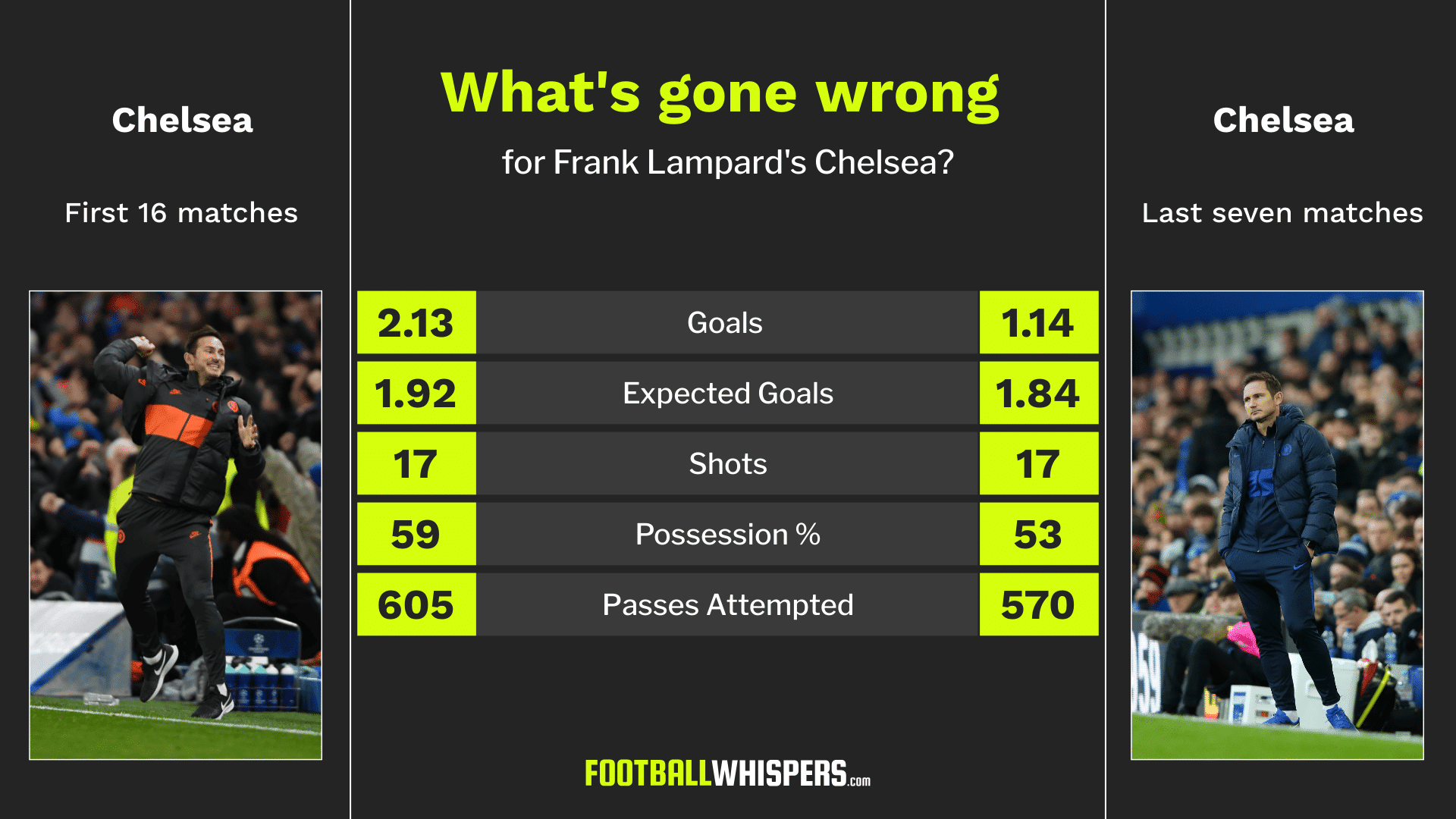 In the opening 16 matches of the season across Champions League and Premier League, Chelsea averaged 2.13 goals. Essentially one goal more on a per 90 basis. It's a significant difference and the drop-off is hard to overlook.

Yet Chelsea are still averaging the same number of shots (17) on a game-by-game basis.

Furthermore, their expected goal averages are fairly consistent. Prior to the blip in form, Chelsea averaged 1.92. Since the victory over the Eagles, their average is coming in at 1.84. It shows the Blues are still creating high-quality chances on a regular basis. The difference is earlier on the campaign they overperformed this metric with some clinical finishing. Now players appear to have lost their shooting boots.

Possession has dropped off ever so slightly, from 59 per cent to 53, and this, of course, means Lampard's men are averaging fewer passes per 90. But there's nothing too alarming to suggest Chelsea's bad form will linger. All of the underlying numbers suggest the Blues are just unlucky at the minute, rather than being in any real danger of seeing their season collapse.

In fact, it is a real positive to see how Chelsea, and Lampard, have handled a few negative results. Other managers would react to this and look to change things in an attempt to stop the rut.

The former midfielder hasn't done that. Instead, he's stuck to the plan and trusted his players to carry out his instructions. For the most part, his players have trusted him. It's why stats haven't dramatically changed. It shows the process is being adhered to. It shows Chelsea are in good hands.

The only time to panic is when underlying numbers take a downturn. Results often fail to tell the whole story. It's the stats which do.

Ultimately, if Chelsea keep creating chances worth close to two goals per 90, victories will follow. Their erratic nature in front of goal over recent weeks could be explained away by the fact they're fielding so many youngsters. Consistency isn't a strong feature of their game and they will blow hot and cold, just as the Blues have this season.

This was his first real challenge as Chelsea manager and, so far at least, he's passed it with flying colours.