Ask Marcelo Bielsa a difficult question and the Leeds United coach will not shy away from it. He will give you an honest, and often detailed, answer.

So, why have his side stumbled in the race for automatic promotion from the Championship in the final weeks of the campaign?

“What we can say is this team deserves 10 or 12 more points and we don’t have them because we have needed too many chances to score. But it's normal I make this kind of analysis because I have the vision of the whole season.”

On this occasion, Bielsa is being somewhat economical with the truth. He is right to suggest his side have been unfortunate based purely on shot conversion across the Championship season. Yet there are further observations to be made about Leeds' predicament

The Whites are at the wrong end of the Championship table when it comes to shot conversion. Their figure of 10.5 shots per goal sees them down in 16th, sandwiched between relegation strugglers Reading and Millwall, and a long way back from their promotion rivals Norwich (7.4) and Sheffield United (7.5).

If this wasn’t bad enough, the picture looks worse with the added depth of shots per game. (Hat tip to Blades Analytics for the data in the visualisation below). 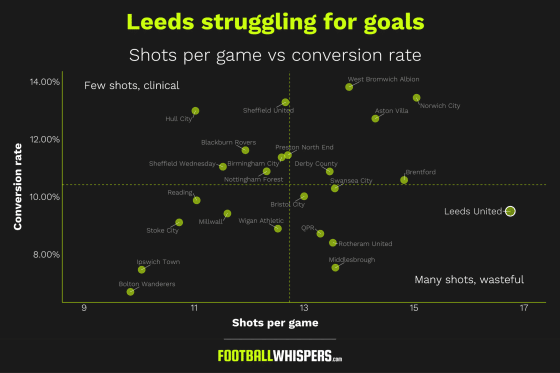 As you can see, Leeds low conversion rate is not matched by a low shots total per game.

Here, the Yorkshire club distinguish themselves from conversion-rate neighbours Reading and Millwall by taking around five more shots per game. In fact, Leeds have averaged almost two more shots per game than any other Championship side this season.

It's clear Bielsa's side are creating plenty of opportunities, they're simply not taking them. And it's this which motivates the claims about Leeds’ lack of fortune. Over the course of a normal season, United would be expected to have scored more goals and therefore have more points.

That said, Bielsa's appeal to view the season as a whole also throws up more questions. And these can't simply be answered by shot conversion rates.

Divide Leeds' Championship campaign into two halves and there is a clear distinction between them.

During their first 23 league games of the season, Bielsa's side claimed 48 points, scored 39 goals, conceded just 20, and had been beaten on only three occasions. The following 21 matches have yielded just 34 points, while 31 goals have been scored, 26 have been conceded, and the Whites have suffered six further losses.

However, Leeds' underlying numbers suggest they have actually become more productive in an attacking sense since Boxing Day –  they have created 1.9 big chances per 90 compared to 1.34 in the first half of the season.

Yet, and most importantly, the Whites have only converted 0.66 of these chances per 90 minutes. In the first 23 matches, that figure stood at 0.69.

There has been a style change between the two halves of the campaign, though, as the Football Whispers team personas below highlight.

Up until the remarkable comeback against Aston Villa, Leeds had been coming under more pressure and were having to do more defending throughout games.

Now opposition sides sit deep, cede possession and force United into wider areas when they attack. It's why, as the persona radar highlights, Leeds are now putting more crosses into the penalty area.

These haven't been overly effective, however. During the first half of the season, when Leeds had space to create, more open defences to break down, they averaged 2.73 headed shots per 90. This has dropped to 2.38 during the second half of the campaign. Goals from inside the area have also reduced; 1.28 as opposed to 1.47 from August to Boxing Day.

So when Bielsa references the ‘vision of the whole season’ it complexifies the picture somewhat.

Yes, Leeds have created enough chances to win games. And yes, they were unlucky not to score more. But since being handed control of games by opponents, they have not taken advantage. Instead, they have faltered, run out of ideas.

And, in the end, sitting deep against Leeds and playing on the counter has proven the best way to best Bielsa's side, even if it is something of a high-risk strategy.

So it's obvious Leeds have been unfortunate not to have secured automatic promotion to the Premier League, Bielsa in this respect is correct. But this misfortune has been exacerbated by a lack of flexibility in Argentine's tactical approach.