There is a time in Premier League history when most clubs have a problem. Be it every year, every two or more, most Premier League clubs have to cope with the sudden upheaval and constant panic of managerial casualties. This has been the case since the day the football universe began, but the yearning for success coupled with the globe getting smaller has helped exacerbate a trend that shows no sign on halting. Yet one club amongst the frantic managerial melee managed to keep their gaffer, solidify their success and build their brand into arguably the biggest football club in the world.

During the late 80’s, Sir Alex Ferguson was a hurricane in a fishbowl that was clamouring to become an ocean. No sooner did Manchester United start becoming the ultra-success that we now know them to be, than the Premier League followed suit and cashed in. The rise of United ran parallel to the rise of the Premier League but one of the above has hit a brick wall whilst the other continues into the stratosphere. One lost its mojo whilst the other continues to shine.

Manchester United are a footballing institution. Sir Alex, with his dry wit and leadership went from a young, promising manager to the King of Football and dragged the ship that carried him too. There have been brilliant, untouchable and ingenious sides (see the treble winners and the fantastic 2009 side) that fought off the financial firepower of Chelsea and Manchester City to keep their heads above the toughest of waters.

Now, in 2016, with the winds of change fully declaring war, United are in a position they haven’t been in since the days Sir Alex set sail. Out of touch and at a crossroads, the Red Devils are in real need of a change. Something has to give.

I should probably start this with letting you know that I’m a Liverpool fan. It would, usually, give me great pleasure to comment on the downfall of this footballing titan, but for two things. Firstly, Liverpool are crap at the moment. Secondly, the great battles of the early 00’s and throughout that decade made football magical. It made the weekends great or the weeknights dreadful. But right now both clubs have fallen on hard times, with United seemingly stuck as to where to go next.

Sir Alex left after plastering the cracked up, withering walls with some beautiful wallpaper. He left the club with a title, but also a shallow squad and the ultimate rebuild needed. David Moyes took over after doing a good job at Everton. But a good job was all it was. It wasn’t outstanding.

One man who is outstanding is Louis Van Gaal. He stands out in many ways. His CV, his attitude and his will to win have always stood out, but his time at United seems to have left him unsure as to what needs to happen next. How he needs to evolve and inspire. Manchester United are lost. Louis Van Gaal is standing out for all the wrong reasons.

The United sides of past have always been full of proven quality. Their side was always so full of top-class players that if a signing went wrong they could easily cope. Juan Veron and Diego Forlan were signed, but the already massive quality of the squad they entered left their names barely remembered by the rest of the league. A testament to the reliance Ferguson placed, or didn’t, on new players being successful.

Compare that to the current United team and this couldn’t be further from the truth.

Memphis Depay has failed to light up the league. It’s really early for him and it’s the case that he still may turn his United career around, but Falcao, Marcus Rojo and even Victor Valdes have failed to turn up to the party in the capacity that may have been expected of them. It is not their poor form that has been the biggest problem, but their need to become a success quickly but failing that is cause for concern. Whilst Luke Shaw has been really unfortunate with injury, he still shows that United have become much too reliant on players turning up as soon as they have got their feet through the door. Yet this is now becoming a constant cycle. Buy new players to replace an underperforming squad, new player doesn’t perform, rinse and repeat. Something needs to change, but could that all be in the communication?

Louis Van Gaal’s press conferences are all but dull. Even when he’s trying to play down a performance or put out a fire, he seems to do this by throwing a strop. Well, unfortunately Louis, there’s only one thing reporters love more than on-the-pitch drama, and that’s off-the-pitch drama.

The stories have been as much about Van Gaal losing his rag and being touchy in an interview as they have been about United’s average performances. Could this be rubbing off on his players? It was apparent to me that Jose Mourinho’s decisions away from the football pitch were impacting on his ability to assemble a winning match-day team. This could be working out the same for Van Gaal.

“I cannot say that I have much fun with him or that I have a special relationship with him, I do my job and he does his. I give it my best, do everything to get fit again, but when the coach always speaks badly about you, when he keeps on putting you down, then it is tough.” – These are the words of Van Gaal’s previous player Frank Ribery. It’s obvious from this that all was not well in that camp when Van Gaal was in charge, but this isn’t an isolated incident. Rivaldo is also quoted as saying the pair don’t get on well, with the likes of Mark Van Bommell and even footballing legend Johan Cruyff trading blows with the current United boss. Who’s to say that this isn’t the reason Wayne Rooney and co have been suffering from below-par performances?

Wayne Rooney is a footballing genius. His goal-scoring ability, energy and work-rate on the football field is first class. His technical ability is at the top of his game, too. Yet currently the Liverpool-born player is having the worst spell of his career. Fans and pundits are saying his time may well be up at the top. It happened to Fernando Torres and Andrey Shevchenko, so it could possibly happen to Rooney too. Either way, United need to find a solution. Inject something new into the team to help the struggling striker. This is his 14th year at the top of English football. He could need a break. All players aren’t the same, but a break could help Rooney recapture and refocus his energy and love for the game. Or it could be that United begin to plan their future without the boy from Croxteth.

If Wayne Rooney was ever to part Manchester United anytime soon, and it would take a brave man to allow that, they would need someone who could come in to offer big game goals. Someone who was even a big name, himself. You can find lesser known bargains if your scouting system is correct, but United, with their budget and standing in world football could probably do worse than buying a proven goal-scorer. A proven talent. Someone like Gonzalo Higuaín. 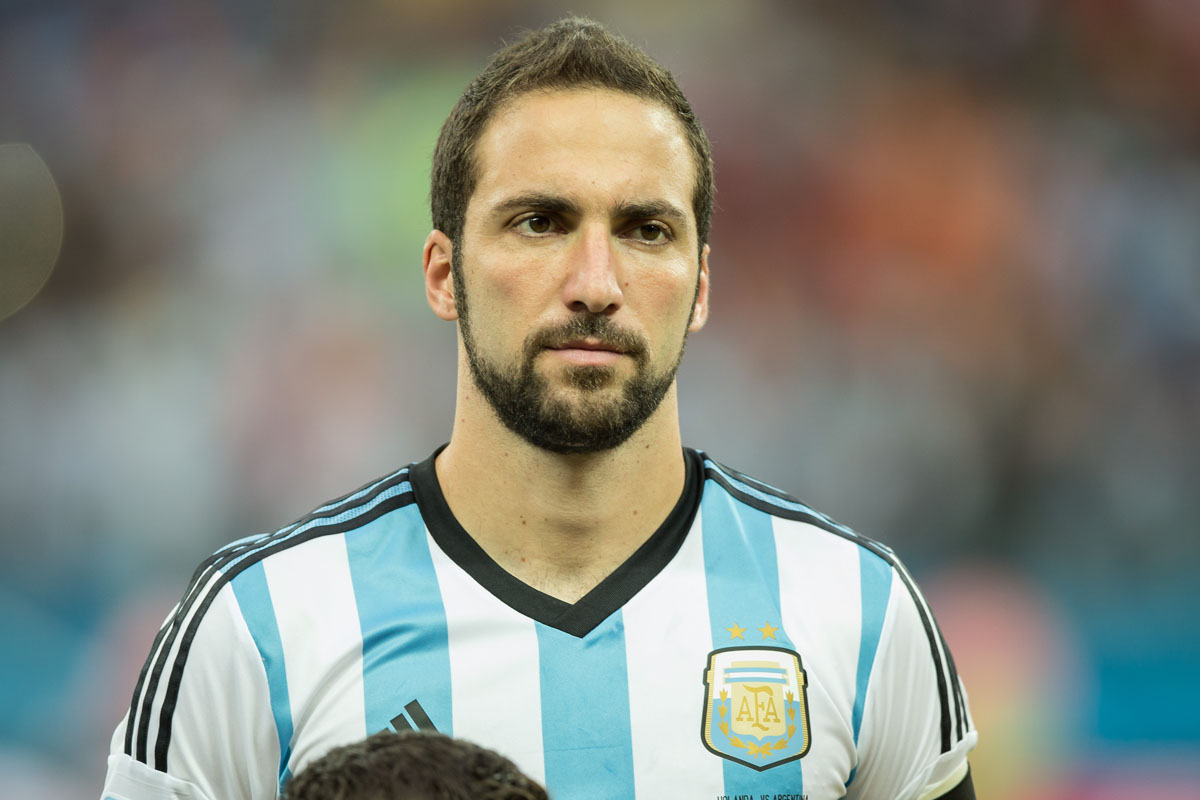 Higuaín is world class. At an age not dissimilar to Robin Van Persie before his arrival at Old Trafford, the Argentine forward scores goals for fun. At both Real Madrid and his current club Napoli, he has a strike rate of better than one-in-two, scoring 177 club career goals in 324 appearances. An absolutely stunning return. Higuaín’s poacher instincts coupled with his ability to hold the ball up and bring players into play would be perfect for Manchester United if they were to return to a classic, United formula of having two classic wide players (something I touch on below) and a second striker/attacking midfielder. His trophy haul is also something that would carry weight. He has played at the highest level in world football and succeeded. Having this type of player at your club can often help younger, less established names learn and settle. It gives them a leader and an example to follow.

One attribute that ran through the great United sides under Sir Alex was pace. Pace from the wings or pace up front, but counter-attacking football was always an illuminating feature of winning the league under Ferguson. This current side lacks any pace or any urgency. There is a reason why fans are calling their team boring, and that’s because the team is playing without the sort of quickness that Old Trafford expects. United fans have been spoilt for thrills over the past 20 years, but what they’re seeing now resembles nothing that they can remember. Wingers like Beckham who, although short of pace, could put a ball in the box that landed on the very blade of grass they chose. Ronaldo, Giggs and even earlier the great George Best have brought bottoms off seats and left jaws on the floor, yet this Manchester United team offers nothing of the sort. This needs to change. The great Red Devil sides were always attacking until they got their goal, they never let you stop for a minute and they countered at such pace that you weren’t able to gather your breath. Where is this philosophy now? It doesn’t seem to exist.

There are a couple of players that I feel would drastically improve this Manchester United team. United’s need for a player to add glamour and excitement could take them to a player like Lucas Moura. His direct style of play and ability to cross a ball would hark back to the days when United could drift through teams like a knife through butter. His injury record for PSG would be something of a set-back, but his build and strength on the ball would certainly enhance the play of Manchester United. The obvious call would be to try and prize one of either Ronaldo or Gareth Bale away from Real Madrid. I do think that if United could have sealed the deal ahead of their Spanish rivals for Bale, the story could be quite different. A superstar going forward, his blistering pace and thunderous left foot were on show for Spurs during his final two campaigns with the club, and that could have bought United some breathing space before the rot set in.

There’s a lot going wrong at Manchester United, and in a way, it’s great for the Premier League. Until there’s a change of direction, however, things may go from bad-to-worse for this Premier League great.