On the basis of their transfer business concluded thus far this summer, Rangers are intent on strengthening their squad with players manager Pedro Caixinha has good knowledge of from his time in Portugal and Mexico.

However, as they assemble a side they hope will challenge Celtic’s domestic supremacy next season, they also appear keen to build around a Scottish core.

Ryan Jack has already been brought in on a free transfer from Aberdeen, and Heart of Midlothian attacking midfielder Jamie Walker is very much a Rangers transfer target. Norwich City midfielder Graham Dorrans is another Scot persistently linked with a move to the club.

Recently it was reported that the Ibrox club had made a third bid for the player, having already had bids of £700,000 and £1million turned down by the English Championship side. The latest bid will have to come closer to the Canaries’ £1.5million valuation of the 30-year-old if it is to be seriously considered.

Dorrans could soon partner the aforementioned Jack at the heart of Rangers’ midfield. If this does turn out to be the case, the former West Bromwich Albion ball-player will be pulling on a shirt he wore for fun as a boy. 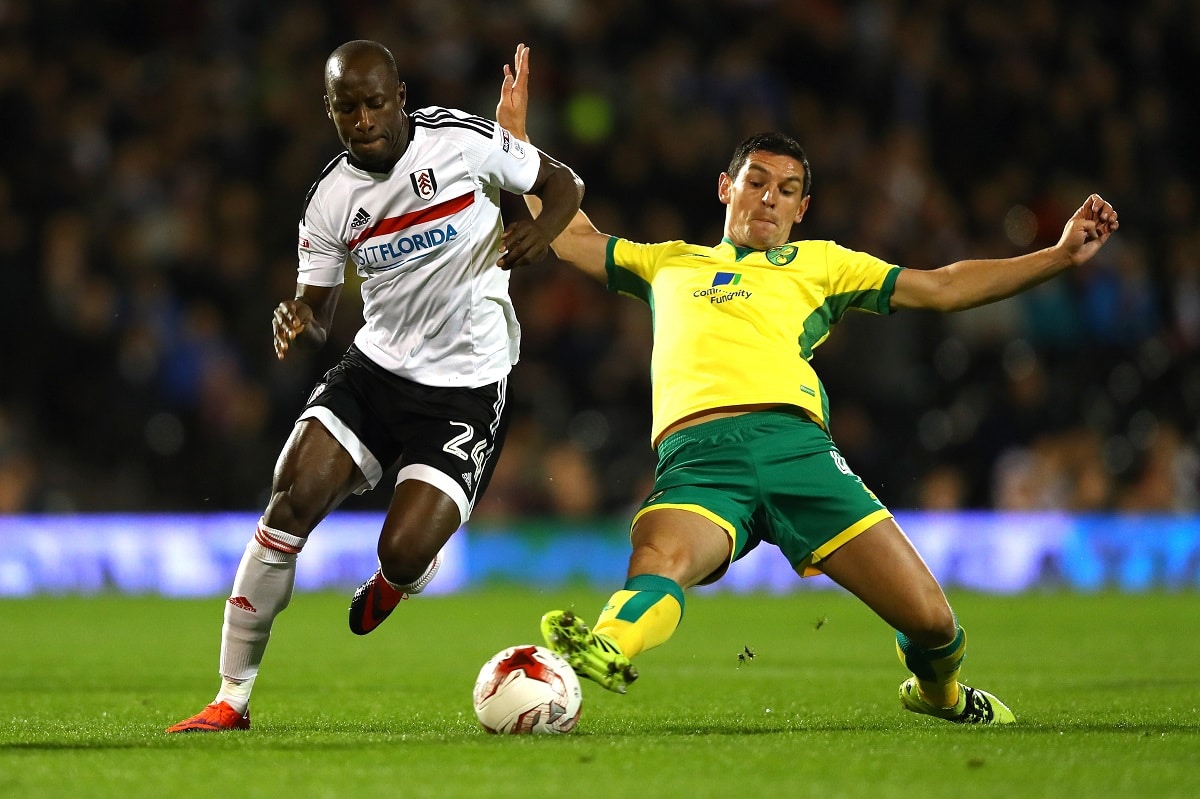 Pictures have circulated around Twitter of a young Dorrans, football in hand, posing gleefully in full Rangers attire. And the player has previously admitted his admiration for several club legends of yesteryear.

“When I was growing up I watched people like Gazza (Paul Gascoigne) and Brian Laudrup play at Rangers,” he said. “Gazza was an exceptional talent, especially up in Scotland where you don’t get many people like that.

“He was a fantastic player and I even cheered when he scored (for England, against Scotland, at Euro 96) by flicking it over Colin Hendry’s head and volleying it in the bottom corner past Andy Goram – that’s how much I enjoyed watching him. I wouldn’t say I was a secret England fan…I was just a Gazza fan.”

Born and raised in Glasgow, Dorrans trained with Rangers for some time before joining Livingston’s renowned youth academy, which the likes of Robert Snodgrass and Leigh Griffiths also graduated from. In 2004/05 he made his debut for the club, and he went on to make close to 100 appearances in all competitions for them.

He then moved south of the border, first to West Brom, then to Norwich. With both teams he acted as a key player in their promotions to the Premier League.

At 30 years of age he is an experienced professional, and he would bring a great deal of maturity, knowledge and tactical know-how to Rangers’ central midfield – as well as passion, given his aforementioned appreciation for the club – were he to make the move.

HOW WOULD DORRANS FIT IN AT RANGERS?

“He plays with a calmness these days, dropping deeper in a playmaker role. He makes the team tick. When you are a forward playing with Dozza, you know you can find the wee pockets and he’ll deliver that pass. He’ll not play safe and knock it side to side. He wants to force the issue – that’s a big thing.

“He’s a big player…and could be a big player going forward. If the move was right for him it wouldn’t be too big a surprise to see him come back to Scotland. He’s always thought of playing for Rangers one day.”

Current Rangers striker Kenny Miller is also positive about the prospect of working with Dorrans, stating that:

“Graham would be a huge signing. We’d definitely be heading in the right direction if we got a player of that quality. He’s played ten years in England, all at Championship level or higher. He’s an outstanding footballer.

“When I saw him linked with us towards the end of last season I watched him for Norwich … They played Brighton and he ran the game. If we got a player like that to this club, it’d only be a positive thing.”

As Naismith highlighted above, Dorrans’ greatest asset is his ability with the ball at feet. When it comes to taking control of the tempo of the game, finding a team-mate – particularly over long range – and progressing attacks through the thirds, the Scotsman is particularly adept. 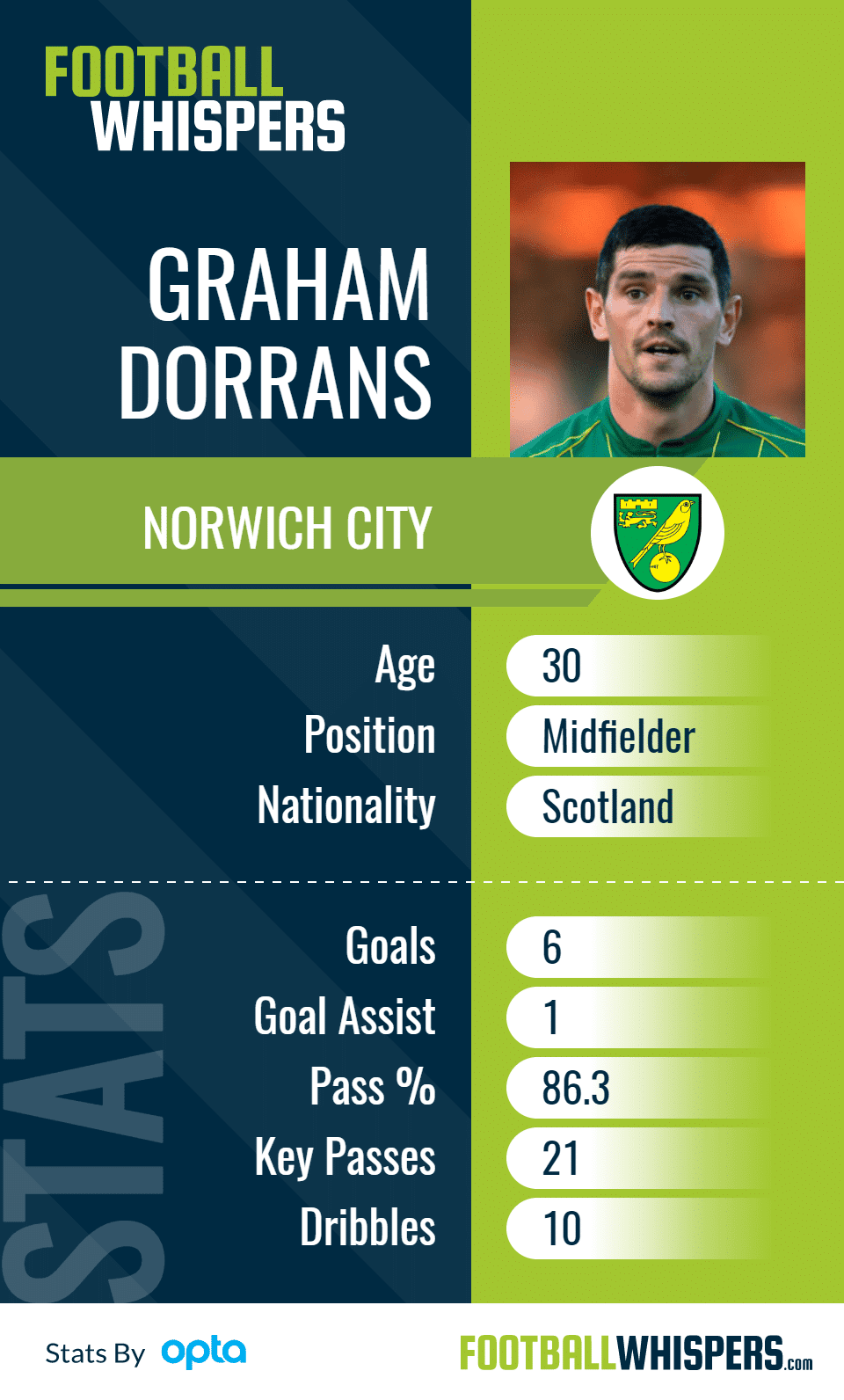 Statistically, he was one of Norwich’s best and most consistently efficient performers in this aspect last season. He averaged more passes per game – 47 – than all of his team-mates bar Russell Martin. On top of that, his remarkable 86.3 per cent pass completion rate was by far and away the highest in the team.

Dorrans showed an ability to create, averaging 0.9 key passes per game. But he also evidenced real nous without possession of the ball that will please Rangers fans who believe their spine needs some added solidity and defensive protection.

His 1.7 tackles per game average was the fifth-highest of all Norwich’s regular starters, while his 1.9 interceptions per game was bested only by Alexander Tettey and Timm Klose. He also showcased a willingness to break up play, committing 1.3 fouls per game.

An astute winner of possession, as well as an effective passer of the ball, Dorrans would bring an assuredness to the Rangers midfield that was lacking at times during the 2016/17 campaign.