Once Oscar’s well-documented move to China completes in January, Chelsea will have funds and the opportunity to strengthen their squad for the title run-in.

Although it’s not the sexy, eye-grabbing position fans would be hoping for, one area that Antonio Conte might want another option is on the left of his 3-4-3 formation. Marcos Alonso, signed from Fiorentina in the summer, is the only senior option he has. Injury to the Spaniard would mean the Italian boss would need to switch a few areas around.

It’s then no surprise that the Blues have been linked with a wing-back this week, with Genoa’s Diego Laxalt fitting the brief that Conte would have handed out. The 23-year-old Uruguayan, once bought by Inter Milan, has been staring on the left of a 3-4-3 or 3-5-2 formation. In terms of positional ability, he is the ideal signing.

Conte wants Laxalt at Chelsea now but will have to wait, claims agent https://t.co/X9LG8YtxQc

After failing to make an appearance for the Milan-based club, Laxalt would spend loan spells at Bologna, Empoli and then Genoa before signing permanently in 2016.

“Genoa believe in him, but they are always open to selling their players for the right offer,” Laxalt’s agent Vincenzo D’Ippolito told Italian website Calciomercato.

The interest seems real, with his agent name dropping the Chelsea boss when asked about potential moves: “Conte had been scouting Laxalt when he was in Italy and he'd love to take Laxalt to Chelsea now.”

However, unless they were to make a game-changing offer to lure Ivan Juric’s left-back away from Serie A, it looks like the London club will have to wait until the end of the season.

“There are many clubs that have been scouting him, D’Ippolito continued. “Fiorentina have been watching him for a very long time, they also wanted to sign him last summer, but there are also requests from the Premier League.”

Last term he scored three goals and added four assists as I Rossoblu finished 11th in the table. In 35 appearances, Laxalt would average 0.9 shots per game, make 2.2 tackles, 1.5 interceptions and complete 1.1 dribble attempts.

The left-footed player loves to get forward, but when he gets into a good position he’s keen to pick a pass rather than just fire the ball into an area. He showed that against AS Roma, getting down the wing to pick out Panagiotis Tachtsidis who had made a well-timed run into the box.

That’s not to say he always finds his mark, but the 23-year-old, doesn’t panic, doesn’t just look to hit the ball into space. He’s calculated and that’s great to see in a young player.

In October, it was Laxalt’s excellent wing play that set up Giovanni Simeone for the only goal of the game away at Bologna. Bursting down the flank, you can see from the images below, he had his marker on his heels. 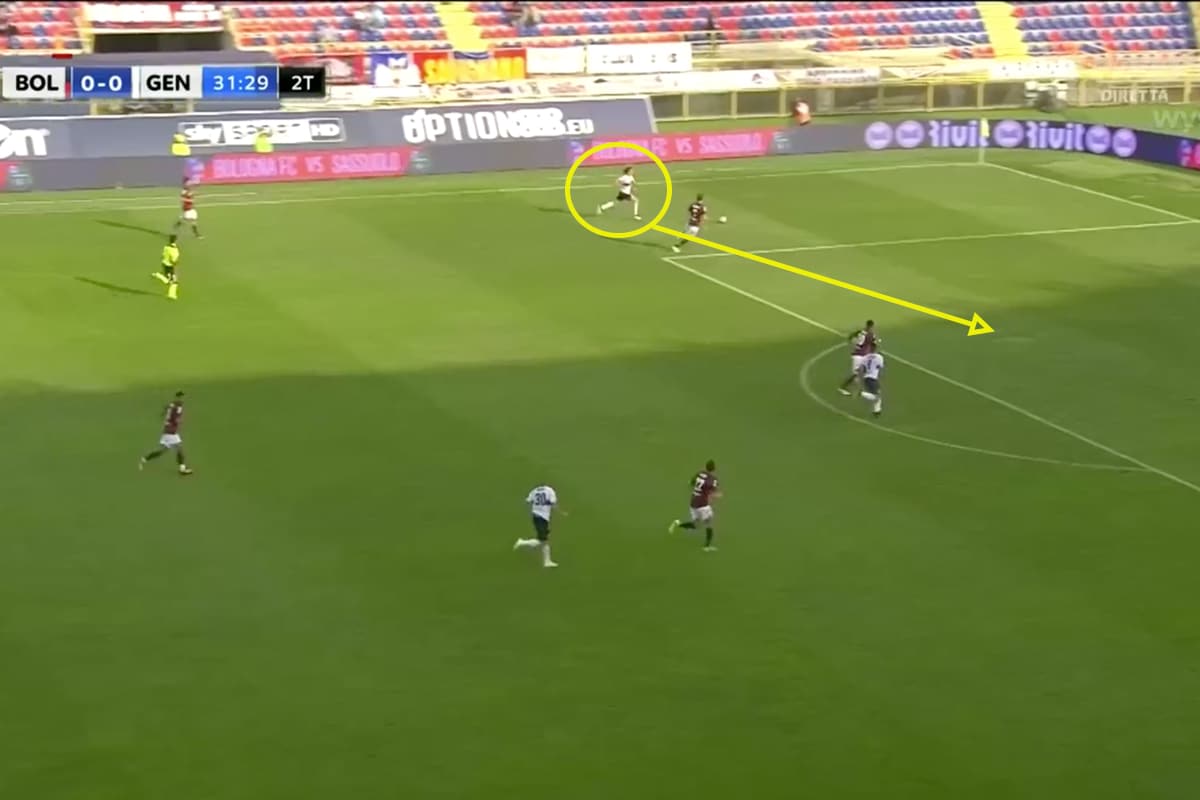 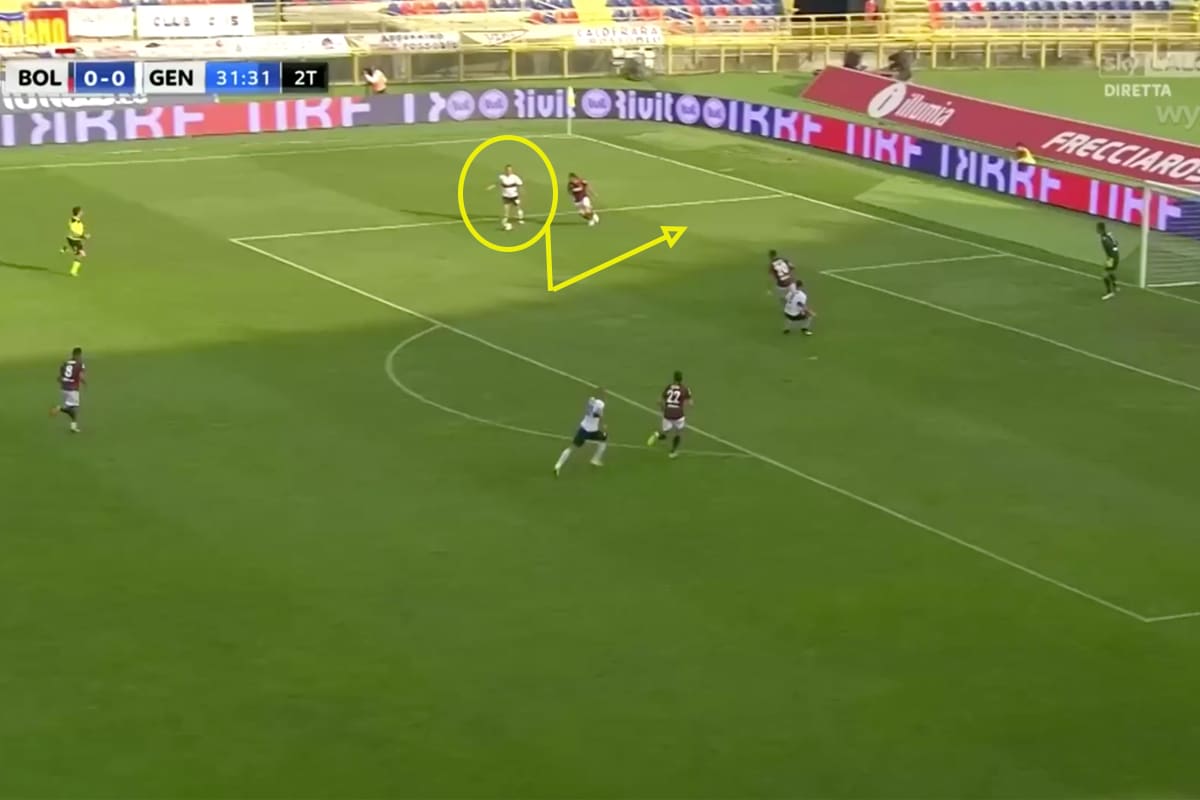 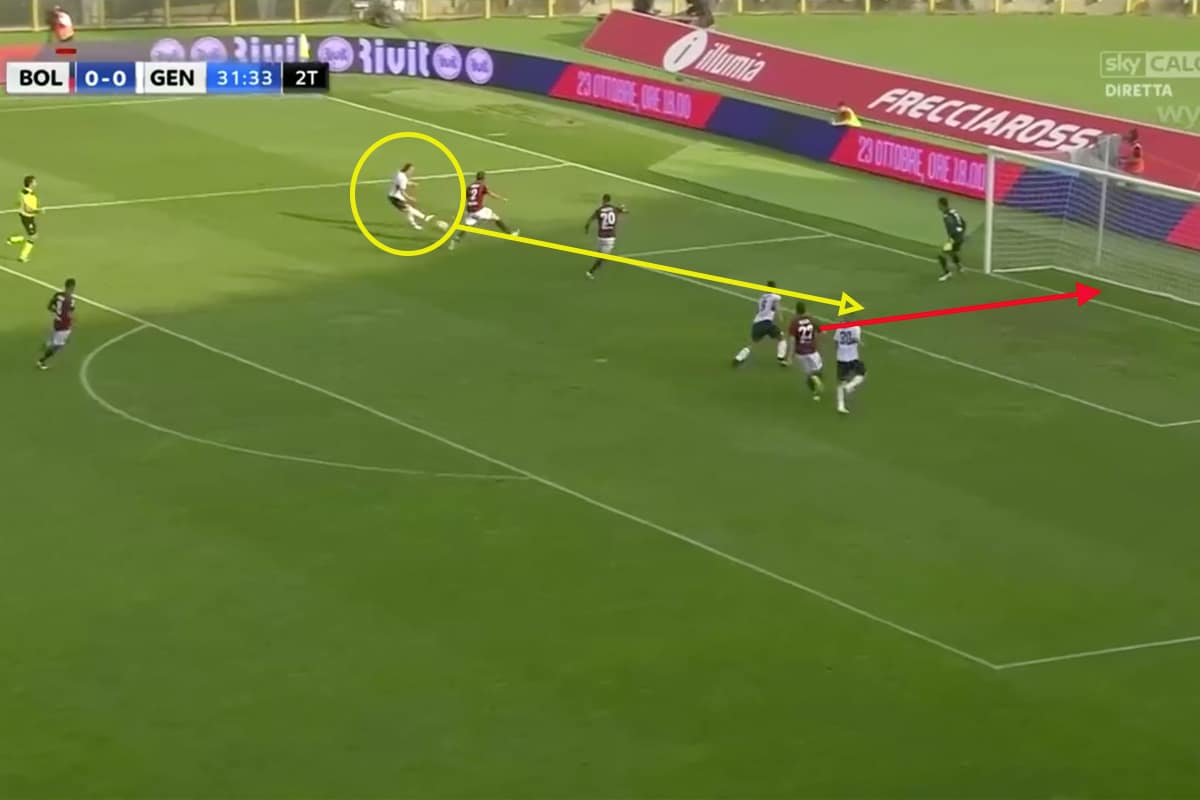 Rather than play the ball in first time, he turned on to his right-foot, delaying the pass, he turned again onto his left before picking the right pass for the Genoa No.9 to score.

Laxalt has also shown an instinct for getting into the right position himself, popping up at the back post, or with a well-timed run near the penalty spot to score himself, like he did in the 94th minute against Torino. Nipping in unmarked on the far side to head in the equaliser and earn his team a 3-3 draw. 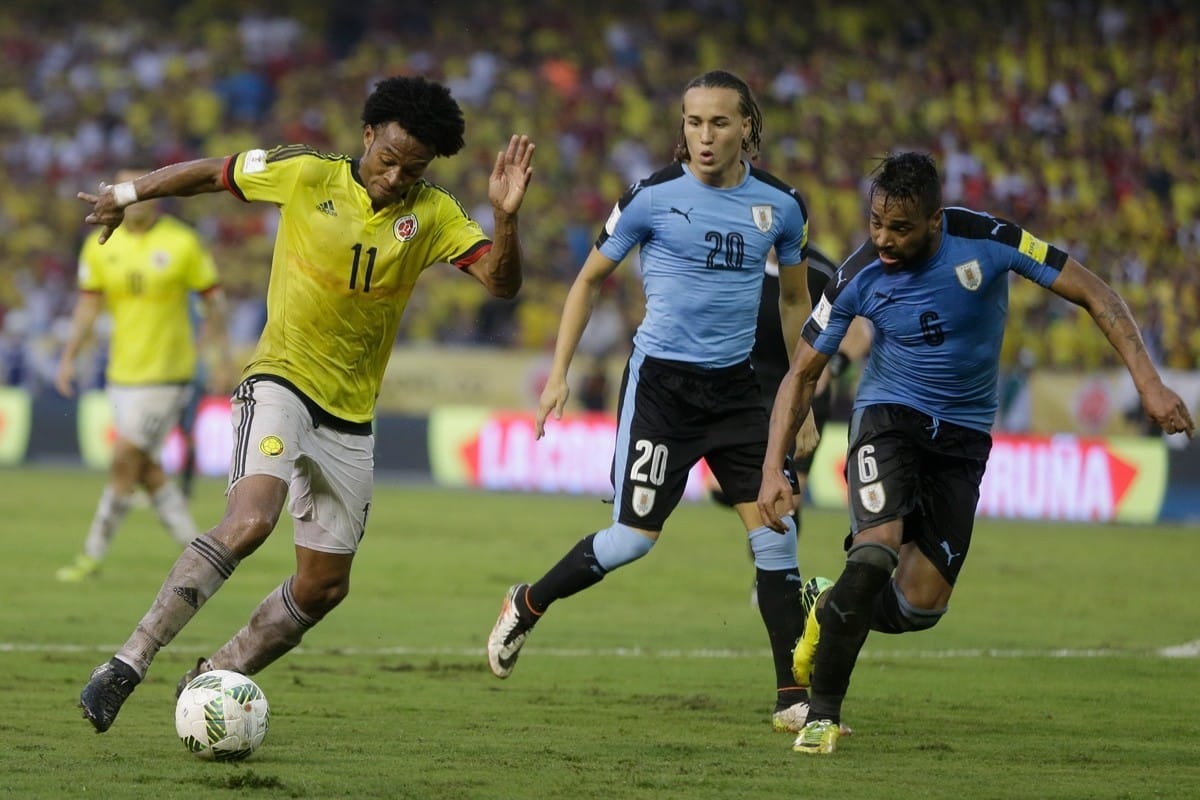 Defensively, he looks very capable too, often a rare ability in modern-day full-backs. He reacts well to the runs made by wingers, using his pace to get into a good position. When the ball is in front of him, Laxaltwho made his international debut in October, tries not to dive in, staying on his feet, forcing the attacker to make a decision.

He can be guilty of going into the back of attackers when chasing back and he also loses out on the battle of strength when up against bigger forwards. However, when he does win the ball, he is always looking to play on the front foot. As soon as he’s in possession, he’s trying to find a pass and drive the team forward.

This campaign, Laxalt’s numbers have improved again, going from 0.9 to 1.4 key passes per game and up to 1.6 for dribbles completed. He’s seeing the ball as much as he was last term, but is completing a higher percentage of passes. His tackles per game are down by 0.3, interceptions by 0.2, but his clearances and reading of the game has improved by 0.9, up to 2.1 per game.

Alonso has enjoyed an excellent first campaign in England – perhaps a little underrated – making 1.4 shots per game, 2.9 tackles, 1.8 interceptions and 0.4 dribble attempts in comparison to Laxalt. The Spaniard would remain as first-choice, but as the Uruguayan can also play as a winger, he would be a good addition to the squad and a better long-term option that Abdul Baba Rahman.

If Chelsea could convince Genoa to sell him this winter, not only would Conte be picking up a great deputy for Alonso, but he’d also be signing a player that can play anywhere down the left side and that sort of versatility can be key when you are trying to win a league title.