Papa Alioune Ndiaye, or Badou as he’s more popularly known, as they look to bolster their ranks in the centre of the park.

Ndiaye is an all-action midfielder who will also chip in with the occasional goal. At his current club Osmanlıspor, of the Turkish Süper Lig, he has 18 goals and seven assists from 75 appearances in all competitions. During the two seasons he’s spent in Turkey he’s been used in both central and attacking midfield positions.

Norwegian side Bodø/Glimt were his first European club, where he was used primarily as a box-to-box midfielder. The side were promoted to Norway’s top division in 2013 and Ndiaye was named the league’s best player.

It was here that his attacking qualities began to come into play and more clubs across the continent began to take note. In his final season with Bodø/Glimt he helped the club to a mid table finish, but they were relegated back to the second division the season after his departure.

The Norwegian club’s loss was Osmanlıspor’s gain. In his first year in Ankara he helped the club qualify for the Europa League via a 5th place finish, and they breezed through the qualifying rounds, defeating FC Midtjylland in the all-important play-off tie.

They went on to top their group and Ndiaye didn’t miss a minute’s football throughout their European campaign. They eventually fell to Olympiacos in the first knockout round, as despite a 0-0 stalemate in Greece they were defeated 3-0 in a disappointing end to their journey on home turf.

Their participation in the competition alerted several more clubs to talents of their Senegalese midfielder, but their domestic form suffered as a result of these games in Europe and they wound up finishing 13th in the league.

A number of clubs have shown interest in the player during this transfer window, with Galatasaray and West Ham emerging as the favourites to secure his signature.

He would offer the Hammers a different dynamic in midfield, complementing the defensive midfield skills of compatriot Cheikhou Kouyaté and the scheming of captain Mark Noble. Pedro Obiang has recovered from the ankle injury he suffered last season, and if Ndiaye were to sign, the pair could be rotated or even used as a pair depending on the opposition.

Ndiaye's strengths lie in his work rate, dynamism, and general brawn in midfield, but he also boast good technical skills which allow him to make things happen in the final third. His attacking productivity could be improved in terms of the numbers he racks up, but he definitely has the tools to do so.

Last season he created just under one chance per 90 minutes, but if he were playing behind higher quality strikers and wingers you could easily see this number increase, and could also lead to an improvement on his three assists last season.

These low numbers when it comes to attacking output may be the reason he’s still relatively under the radar. He might not be catching the eye of the statisticians, but the scouts who have watched him in person will have seen a player who could go from unremarkable to outstanding with the right coaching and in the right environment.

He’s generally good under pressure, and will keep an eye on his defensive responsibilities even if he’s given a more attacking role in the midfield. He has the potential to be a great all-rounder, and last season he led his team in tackles per game with an average of 2.6, reaching almost 3 per game in the Europa League.

Slaven Bilic's side played a number of variations on a theme when it came to their formation last season, and a player with this versatility in the central areas would fit in well.

Ndiaye could easily play as one member of the double pivot in the 4-2-3-1 system, and maybe even do a job in one of the three attacking midfield positions. In a 3-1-4-2, 4-4-2, or any other formation with a midfield four, he wold be ideal as one of the box to box central midfielders in the middle two.

As Bilic looks to improve on his side's 11th place finish last season, adding this extra strength to the middle of the park would help maintain the consistency they lacked last time around.

The signing could also prove to be a wise investment, and the reported fee of £8.5million would mean that the transfer isn't much of a gamble. Getting a player with such potential in today's market for a fee below £10million is rare, and at 26, the Senegalese could be just about to realise this potential as he hits his peak years.

With a couple of new faces added in attack, in the shape of Marko Arnautović and Javier Hernández, it looks like midfield is the next position the London club will look to strengthen, and given the way he would fit into the side and the dynamism he would add, Ndiaye could be the ideal signing. 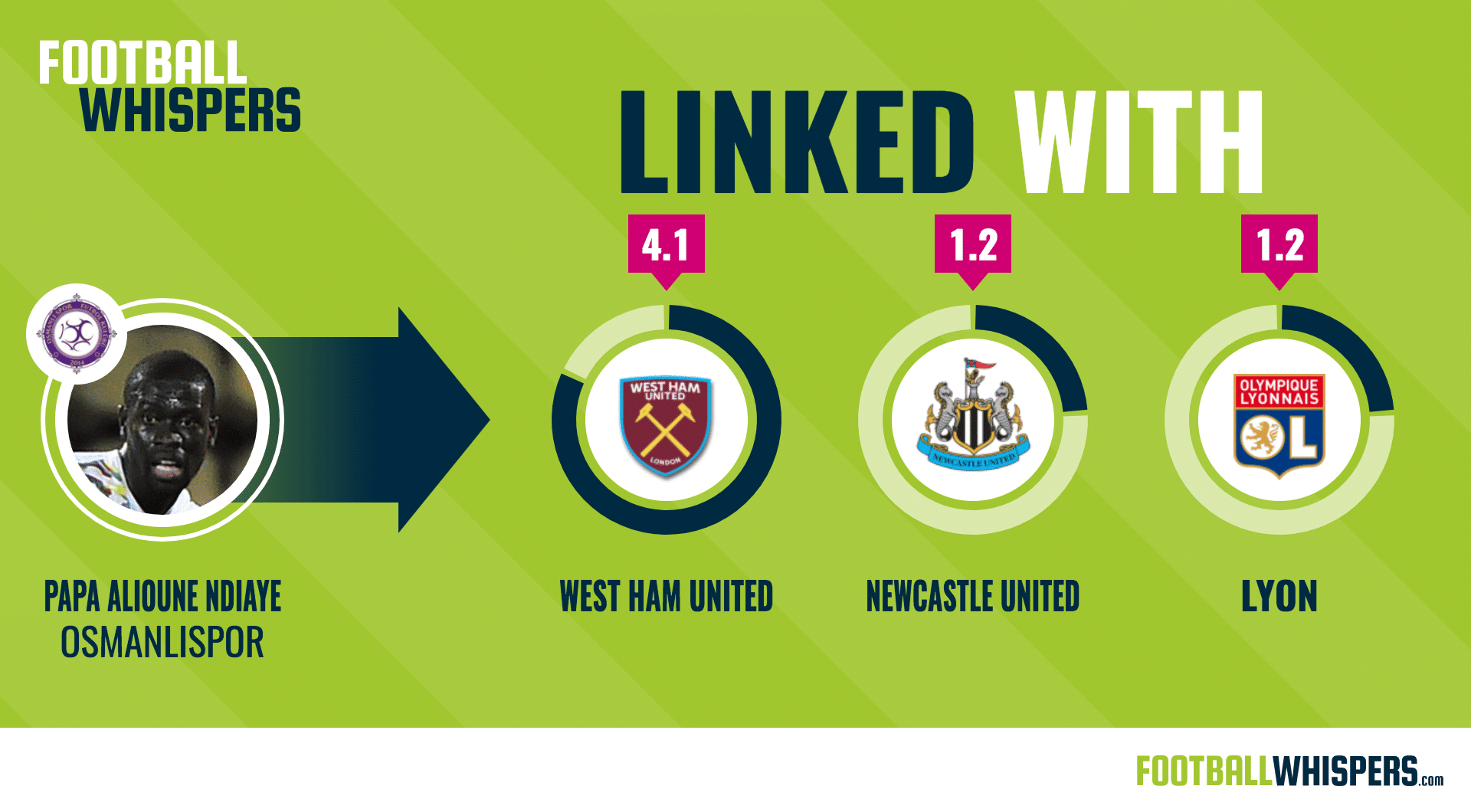