Given Chelsea's fantastic start to life under Antonio Conte's management, you'd be forgiven for thinking that they don't require any new additions in the January window, but since it opened a potential link with Bayern Munich's Arturo Vidal has scored highly on the Whispers Index. In episode two of Football Whispers TV, journalist Matt Scott and former Crystal Palace chairman Simon Jordan discussed the likelihood of a transfer materialising.

Since arriving at Stamford Bridge, the Italian boss has transformed the tactics at the club, switching to the 3-4-3 formation that was such a success with Italy at the 2016 European Championships.

Diego Costa is in great form, leading the race for the Premier League Golden Boot with 14 goals and an average of 3.1 shots per game. Conte has also found a way to get the best out of Belgian winger Eden Hazard. The 25-year-old has nine goals and two assists and even stepped into the false nine role when Costa was suspended against Bournemouth.

Everything is great and no one sees a problem when you are winning, but losing 2-0 to Tottenham Hotspur, and failing to break the Premier League record for consecutive wins will sting, but the Blues are in a great position to strengthen this month.

Picking up a cool £60 million for Oscar’s move to China is almost like free money, and it means that Conte can look to bolster his options.

Fingers were pointed following the defeat against Spurs. Dele Alli took advantage of playing against Victor Moses and Cesar Azpilicueta, but the issues came before the ball was played into the penalty area. 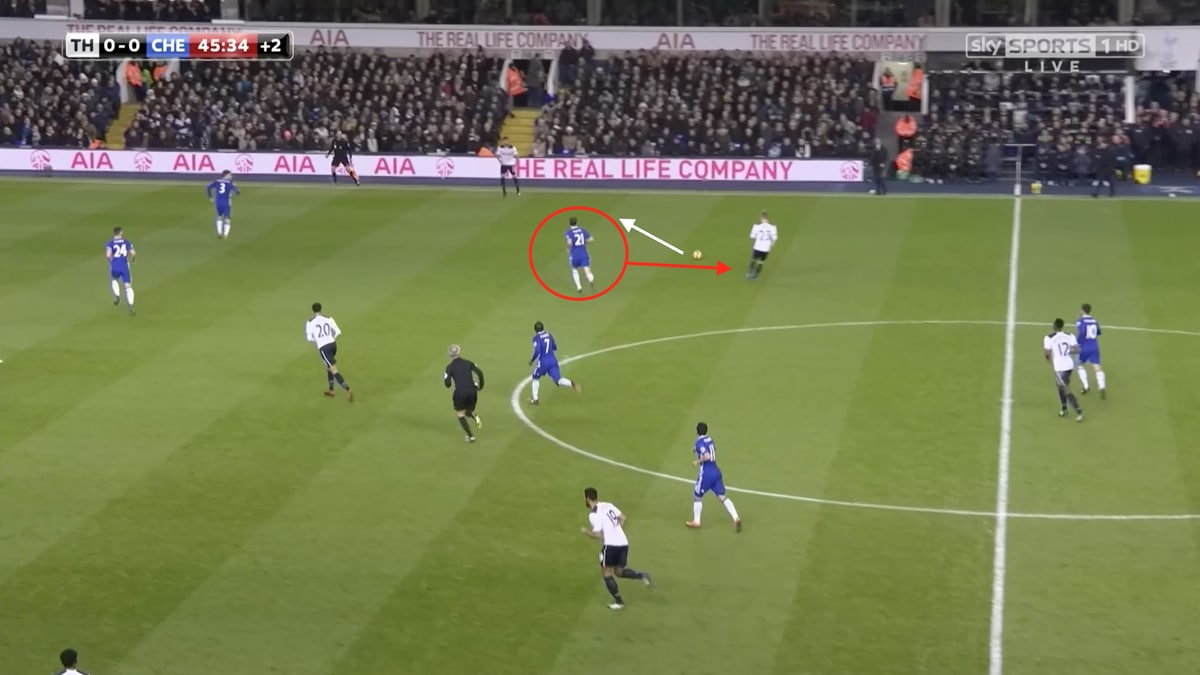 Nemanja Matić was picking up Christian Eriksen as the Dane played the ball out to Kyle Walker. Then, as the full-back advanced down the wing, as you can see from the image below, the Serbian, Gary Cahill and Marcos Alonso were all drawn to the ball. 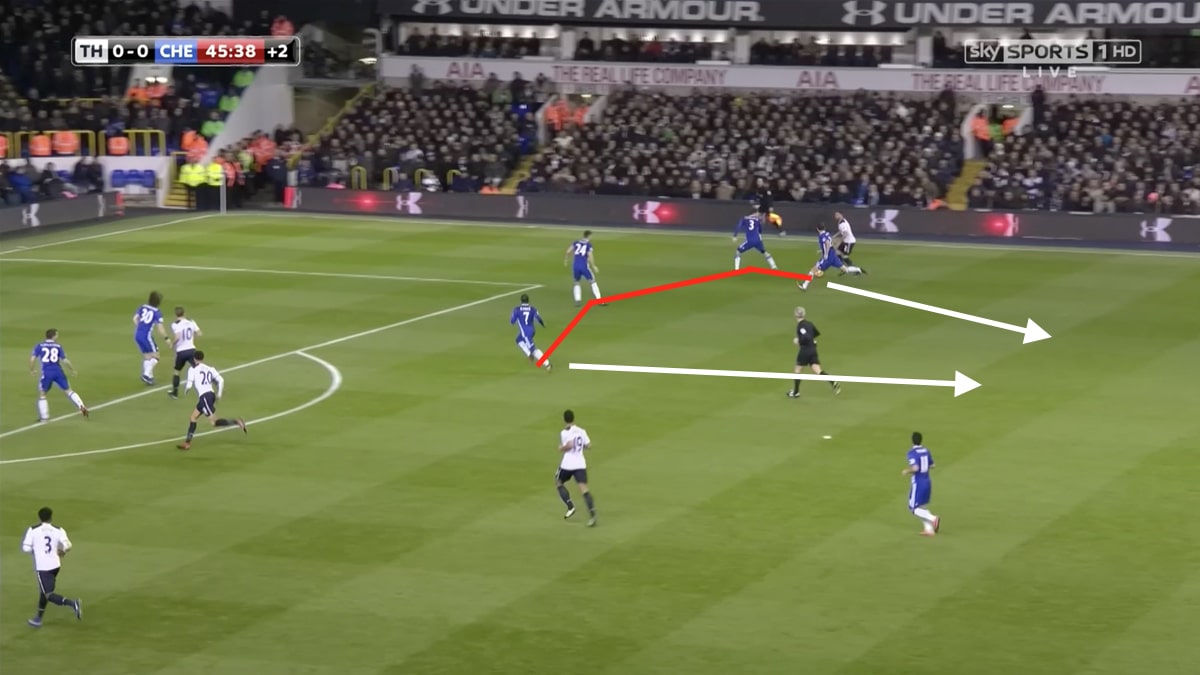 Walker cuts it back and both central midfielders are too deep to press Eriksen’s cross.

Even for the second goal, Matić fails to react and close down Eriksen quick enough when he is heading towards goal. Twice in the same game, the midfield failed to play aggressively enough to limit the space for one of the Premier League’s best passers.

That’s where Vidal comes in. Kante is the destroyer, but beside him, it works to have a player that offers a little of everything. Averaging 3.2 attempted tackles and 2.4 interceptions, he is as active on the defensive end as he is on the front foot.

With John Obi Mikel and Oscar moving on to China, Chelsea are not as deep in the middle of the park as Conte would wish. They could easily match the reported £150,000-per-week that Vidal earns at Bayern Munich, and he would still be on less than Cesc Fabregas, Eden Hazard and Thibaut Courtois.

The player helped Conte conquer Italy with Juventus, winning three Serie A titles. After winning the Bundesliga last season, he is apparently keen on coming to England and expanding his game in the Premier League. 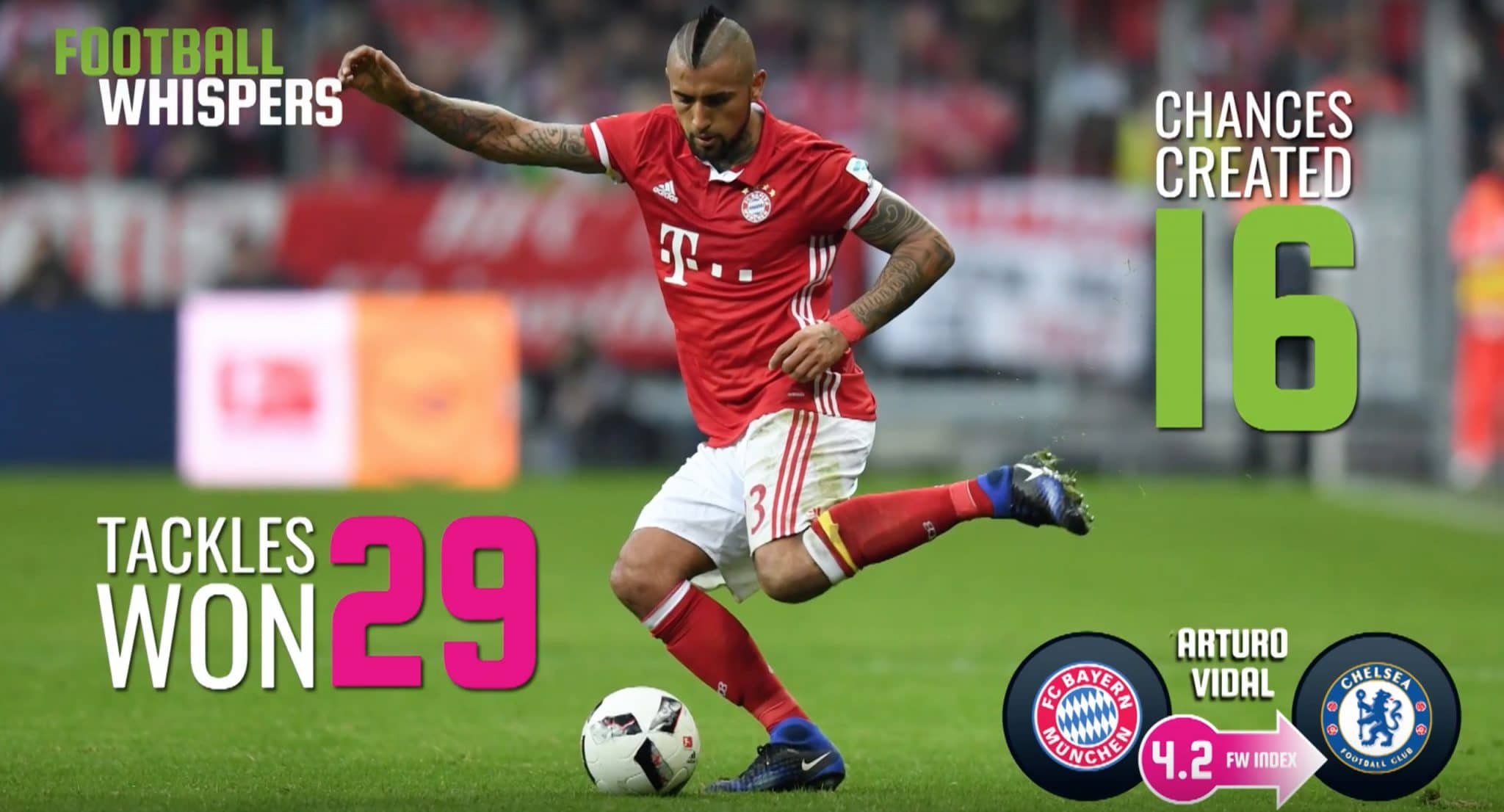 “Arturo Vidal said he'd take me to war with him? I'd take Vidal too. He's an amazing player. I must admit at Juve, I found him hard to fit in,” Conte told press before he was even announced as Chelsea’s coach.

“He has extraordinary physical and technical attributes, if I get to coach him a little more it'd be fantastic. I want him on all my teams.”

Vidal would help Chelsea in defence and attack

Vidal brings a bit of everything, and that’s what makes him such an ideal signing. Playing alongside Thiago and Xabi Alonso in a midfield three, it’s Vidal and not the former Liverpool man that is the deepest of the three. He positions himself to cover at both centre-back and if the plays comes down the flank. In this instance, RB Leipzig play it short and Vidal races in to regain possession, transforming the play into a Bayern attack. 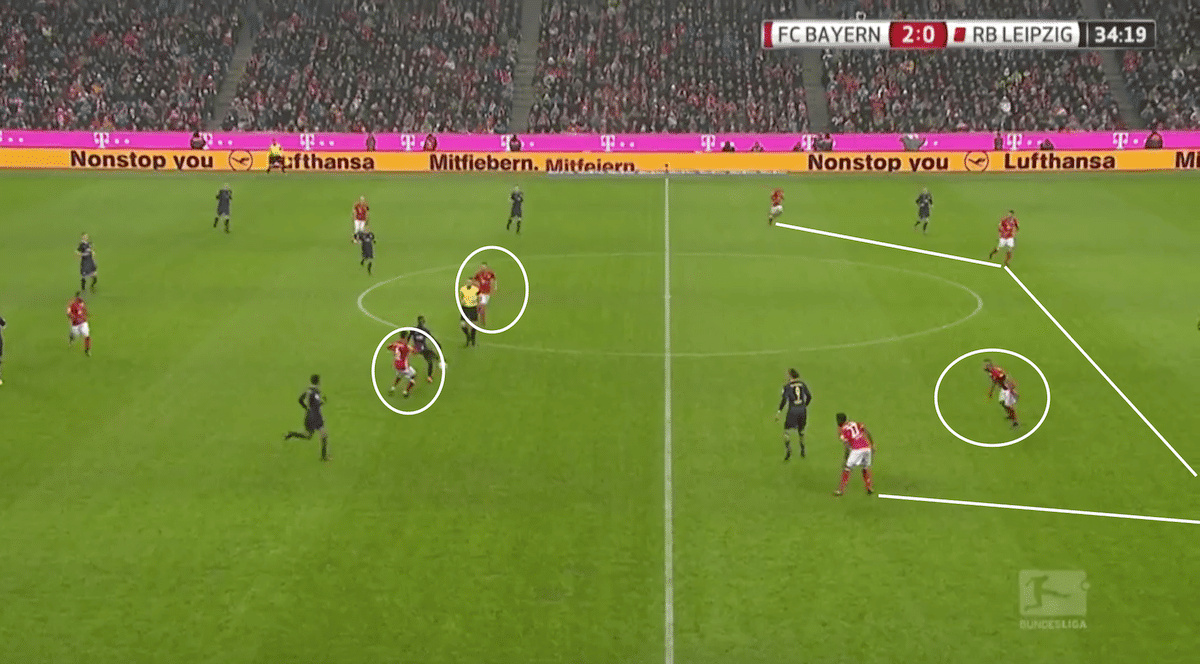 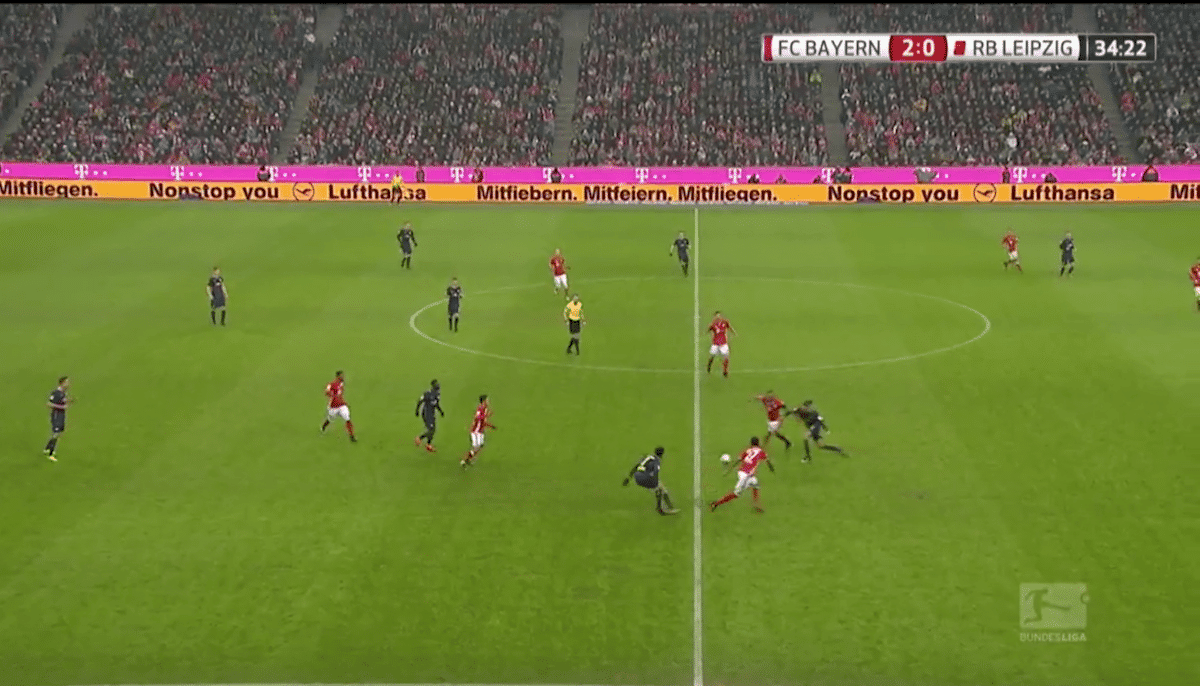 Going forward, Vidal has the ability to stretch the play. His vision and passing range can trigger counter-attacks and provide a much-needed out-ball.

Against Spurs mid-week, the Chelsea midfield duo failed to deal with the press. Adding a much more talented passing presence in the centre of the pitch would help bypass that threat and stop Chelsea losing the ball as easily.

Playing against Dortmund, his long balls out wide to Franck Ribery helped open up the play. Vidal has the sense and experience to know when to keep things short, and when to play the ball long. 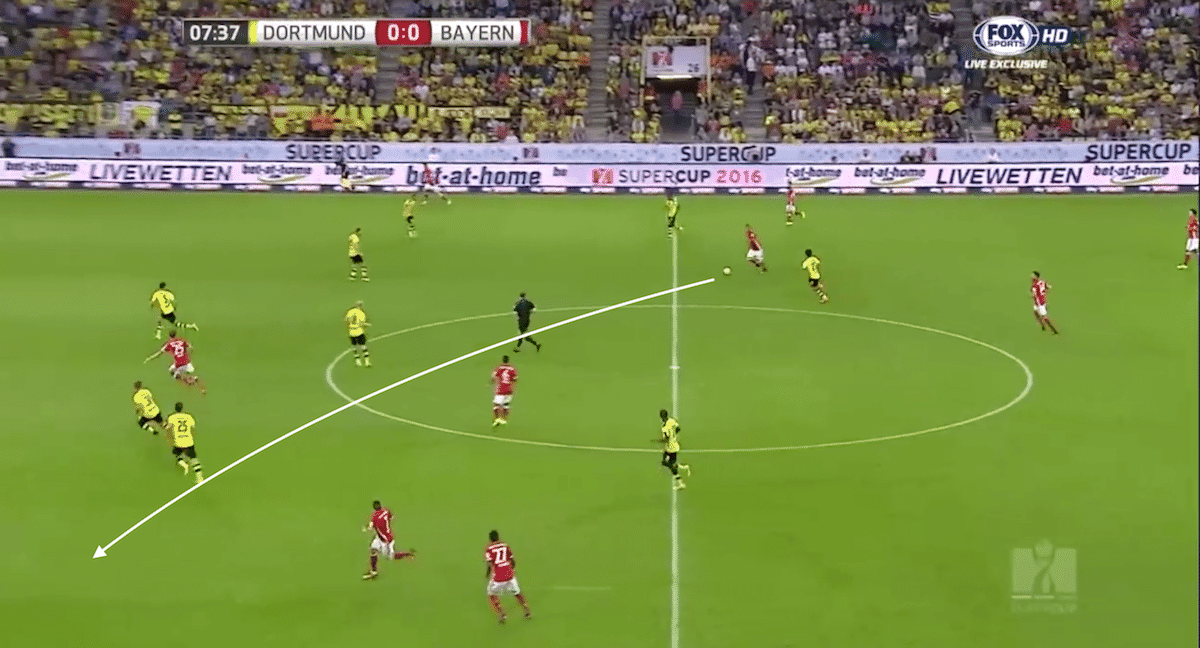 What separates Vidal from Matić is the way he can transform into an attacking threat in the blink of an eye.

You can see from the images below, as soon as the play breaks down the left, Vidal is quick to sprint forward, he is free on the edge of the box, fires in a shot and then follows up the rebound to score. 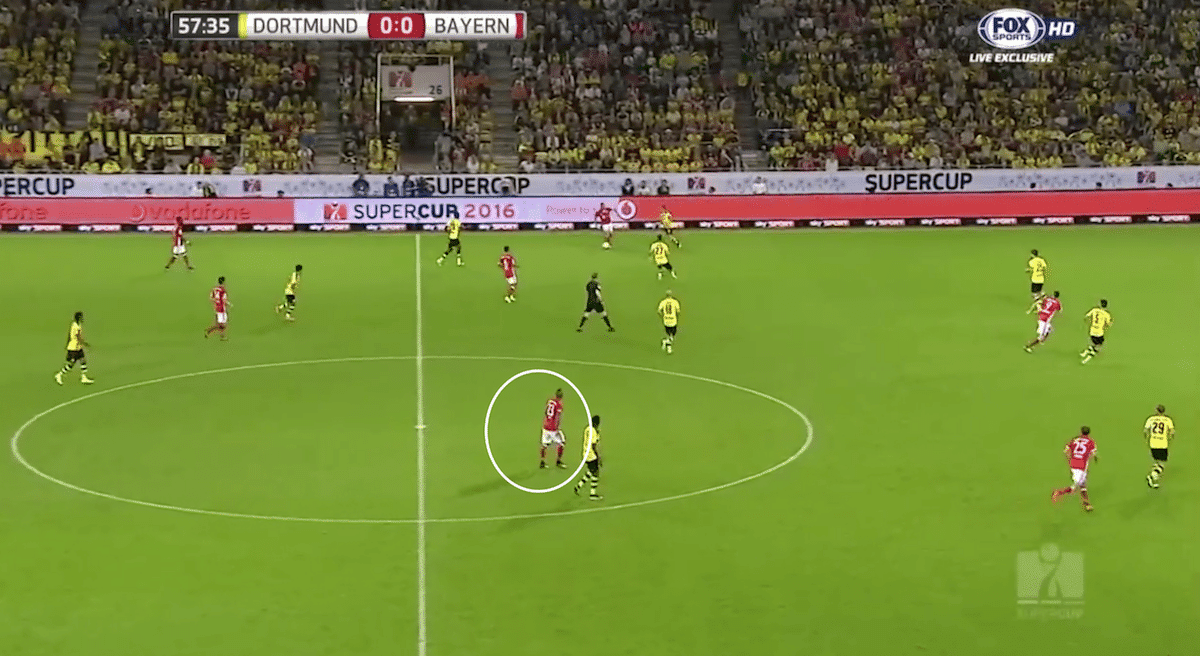 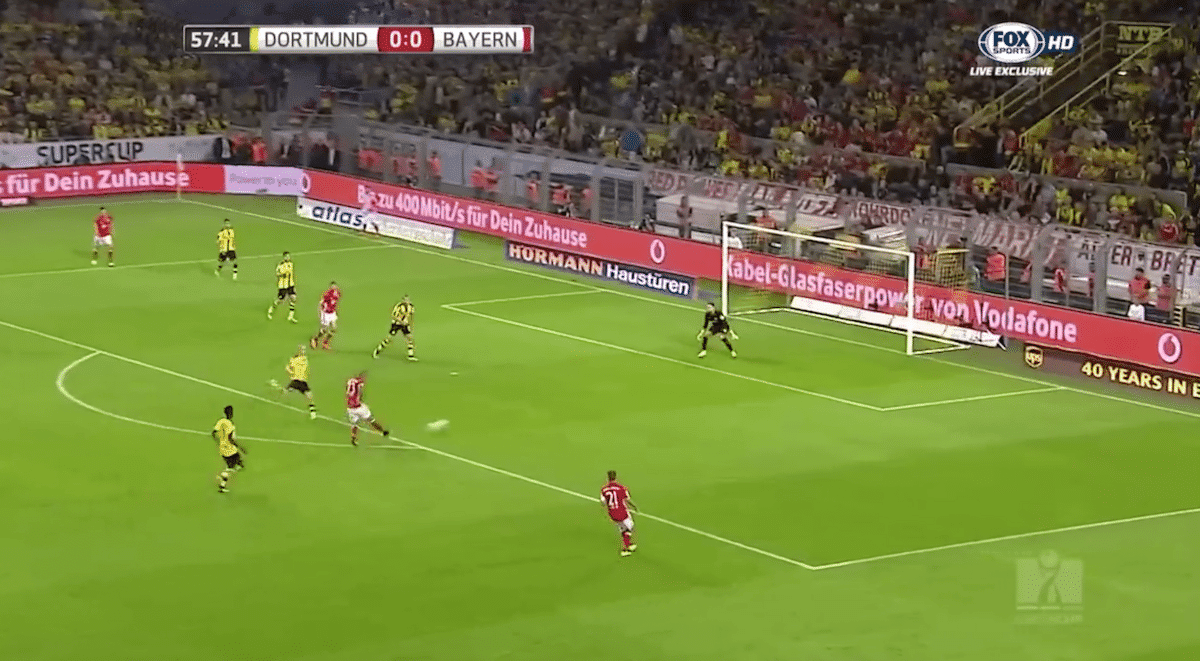 Although he turns 30 in May and Chelsea would never be able to recoup any of the reported fee of around £40 million, that has never been a problem for Roman Abramovich — David Luiz is a great example of that. However, if it wins Conte the league and puts them back in a position of power in the UEFA Champions League, the Premier League TV money stops any huge financial losses.

In terms of fee and thinking of the future, Vidal to Chelsea makes little sense, yet, as a player, a talent that the coach knows and someone who can not only add depth, but another dimension to the Blues midfield, Vidal is perfect.