One of the traits of being owned by the Pozzo family is planning for the future by gathering players and squirrelling them away – it's something Watford fans are used to.

When Abdoulaye Doucouré signed from Rennes last January he was immediately sent on loan to Granada – Watford's then sister club – for the remainder of the campaign. The French midfielder finally moved to WD18 in the summer to fight his way into first-team contention.

Another example was Venezuelan wonderkid Adalberto Peñaranda. Snapped up from Udinese, he spent the remainder of last season on loan at El Grana and has been loaned back to the Zebrette and Málaga this term.

Sven Kums became the latest player to ‘move' to Vicarage Road when he joined from Gent on August 29 of last year in a deal worth just shy of £7.5million. The next day he was unveiled as an Udinese player for the 2016/17 campaign. 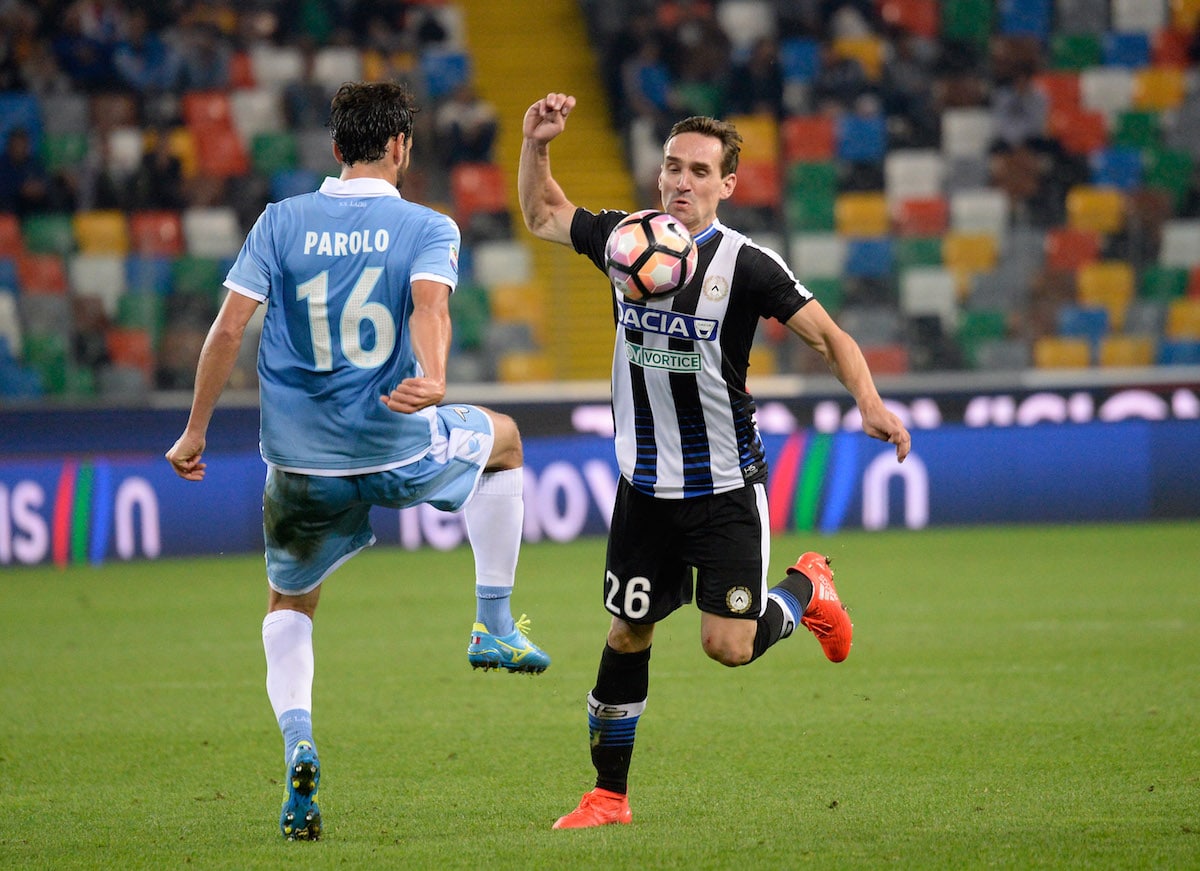 Now the Belgian midfielder says he would like to return to Watford this summer in order to pursue a first-team place.

“What does the future bring? I expect I will go back to Watford,” he told Belgian newspaper Het Laatste Nieuws.

“I have not been in the Udinese side and had a conversation with the coach here, because this is not a pleasant situation, and he has been honest with me.

“He prefers physically powerful players and he sees me primarily as a defensive midfielder who is only involved in the defence. But that's not even my position.”

Could Kums return to Vicarage Road and what would he bring? 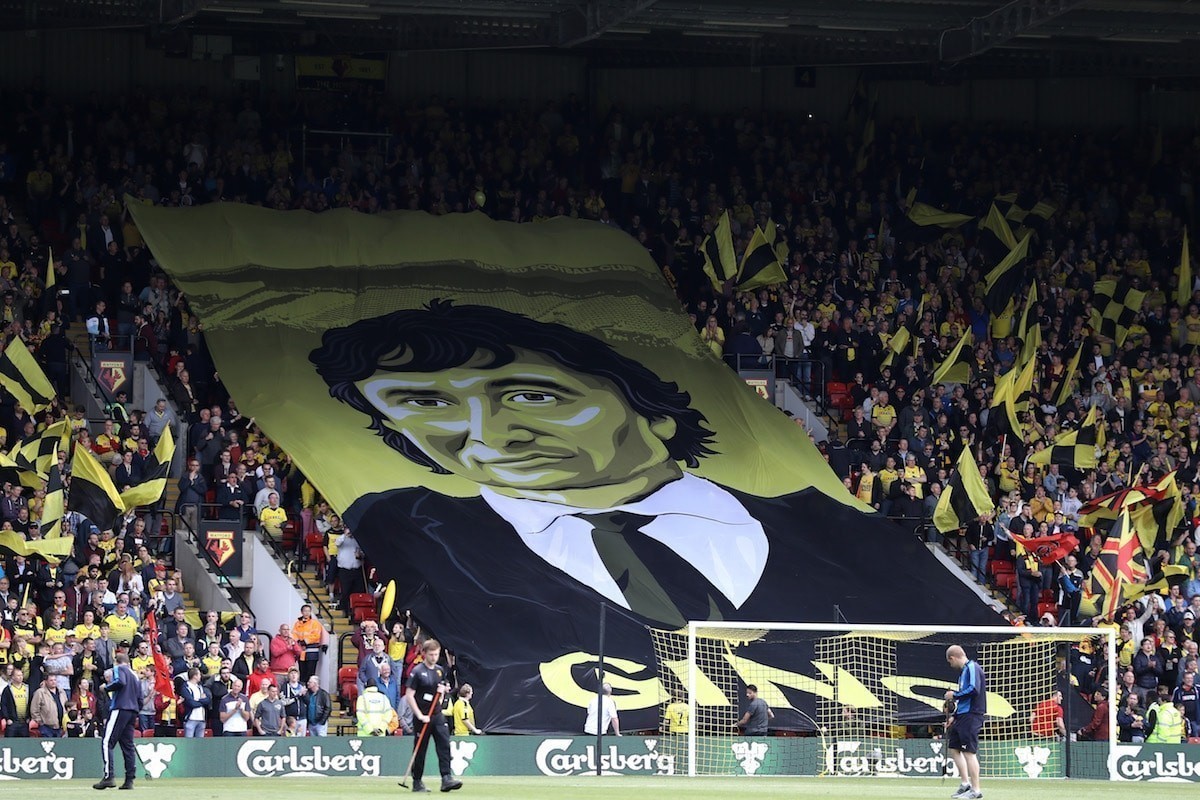 READ MORE: HOW WALTER MAZZARRI BOUGHT HIMSELF TIME AT WATFORD

At 29 years old it is unlikely Kums' stock will rise significantly. It is, therefore, a long shot to suggest the Belgian was brought into the Pozzo stable as an investment.

If the Pozzo family recoup their money on the former Gent midfielder they will have done well. That alone suggests he has a future at Vicarage Road.

The Pozzos' success has, after all, been built on recruiting young players – often from South America – for a minimal outlay before improving them and selling them on for a healthy profit. Think Alexis Sánchez, Samir Handanović, Mauricio Isla or Kwadwo Asamoah.

Kums, especially off the back of a season in Udine where he has failed to score and registered a solitary assist in 19 Serie A starts, is unlikely to be the next poster boy for the family's model.

Whether or not he is coming to Watford to compete for a first-team place or simply to be moved on depends on what he can add and what vacancies there are in the Hornets' midfield.

It is interesting to note Kums' disdain at being crowbarred into a defensive midfield role. He is, by trade, a playmaker – not a defensive midfielder. That he has been played out of position would go a long way to explaining his disappointing return for the Zebrette this season.

Despite that he has done reasonably well in a more defensive role. He has won 2.8 tackles per game which is more than any other player in Walter Mazzarri's squad. Only Adrian Mariappa and the tenacious Valon Behrami (2.7) come close.

In the image below, taken from Udinese's 2-1 win over Cagliari on Sunday, Kums spots trouble ahead of him before the ball has been played. He immediately closes down the space and snaps into a challenge to secure possession before the player receiving the ball can react. 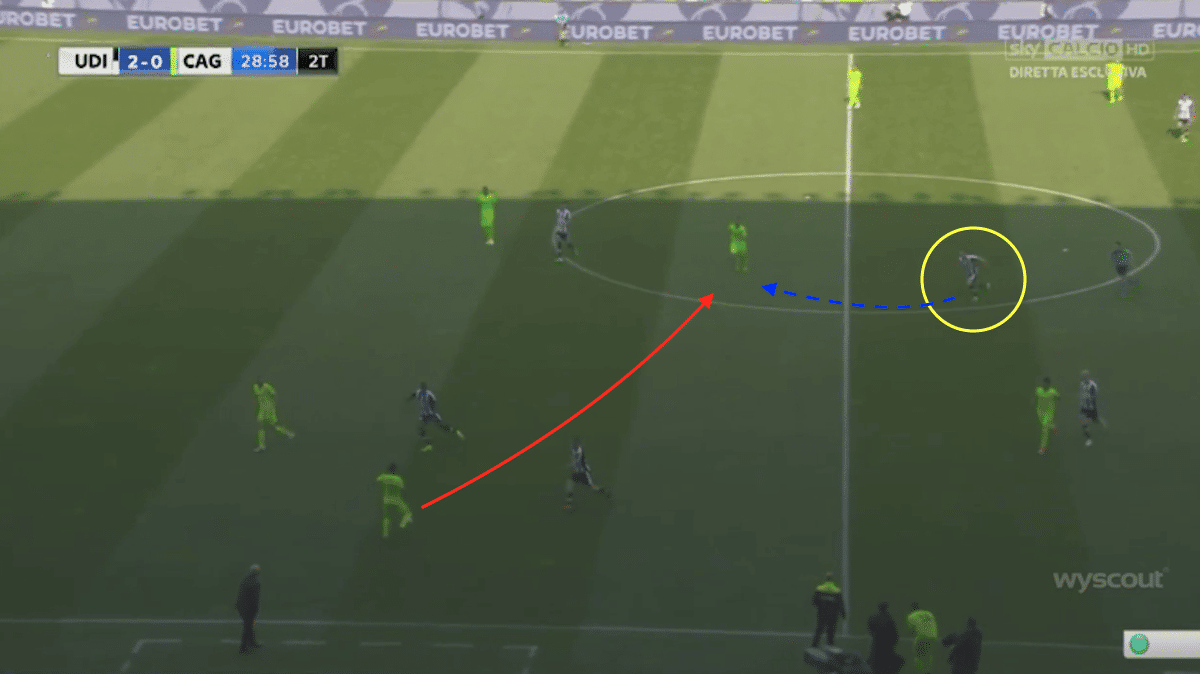 Despite his protestations he is actually the Udinese player with the second most tackles per game – just behind former Hornet Marco Faraoni (3).

Earlier in the same game against Cagliari he effectively makes the hosts' opener goal by displaying good anticipation. Again he is quick to press and wins dispossess the visiting player. The loose ball breaks for Stipe Perica (circled in red) to spin and lash home. 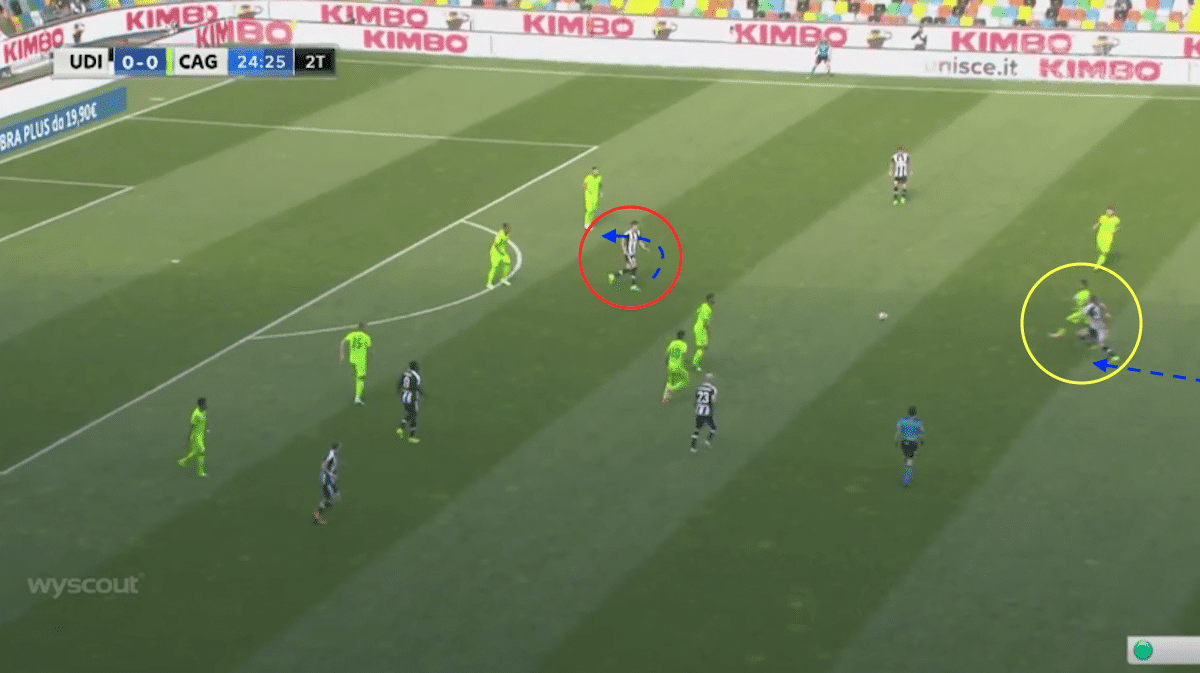 What Kums would prefer to be judged on, however, is his ability on the ball. The former Belgian Under-21 international's passing, vision and flair are the attributes he has traded on.

In the still below he receives the ball from a ricochet and his passing opportunities are blocked off by the six Roma players either side of him. But he shows the presence of mind to clip the ball over them all to find Rodrigo De Paul in space. 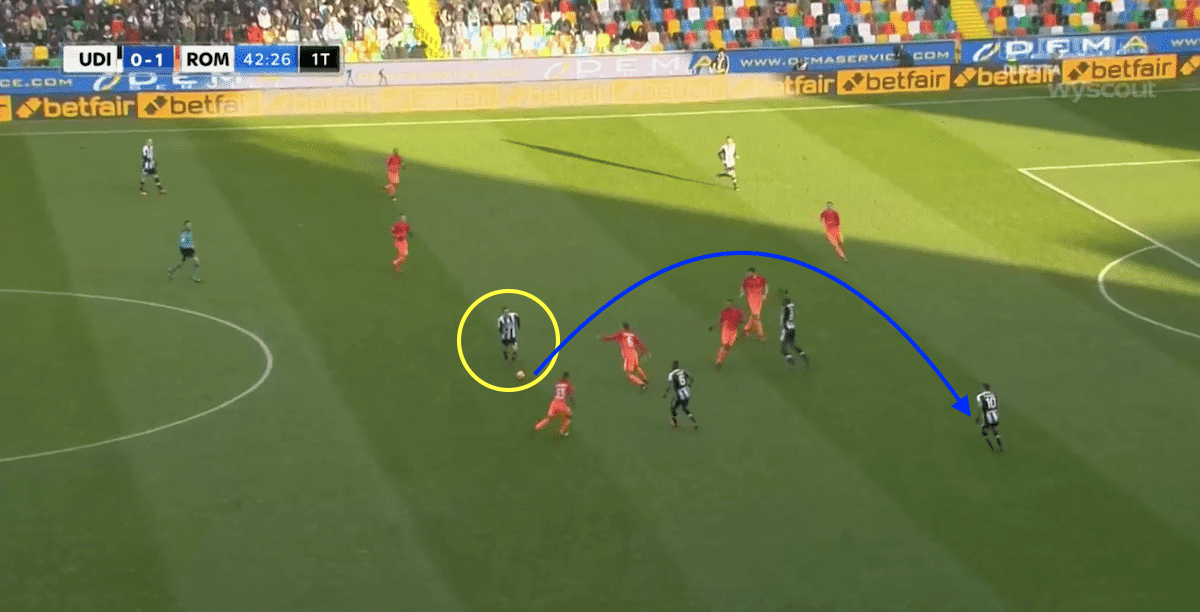 Even with former Manchester United and England midfielder Tom Cleverley tied to a brand-new five-year deal there will be vacancies in the Hornets' midfield this summer.

Swiss aggressor Behrami is out of contract and injuries look to have caught up with him. He has made just eight appearances in 2017. Ben Watson has been afforded just four substitute run-outs and is a certainty to depart too.

That leaves the frustratingly inconsistent Étienne Capoue, Doucouré, who has impressed in recent weeks after finally being handed a chance, and Cleverley on the books for next season.

Cleverley has done well since returning to Vicarage Road but is not a specialist defensive or attack-minded midfielder. Doucouré screens the back four and Capoue is the most forward-thinking of the trio.

Yet none of them are out-and-out playmakers and that is where Kums could fill a void. 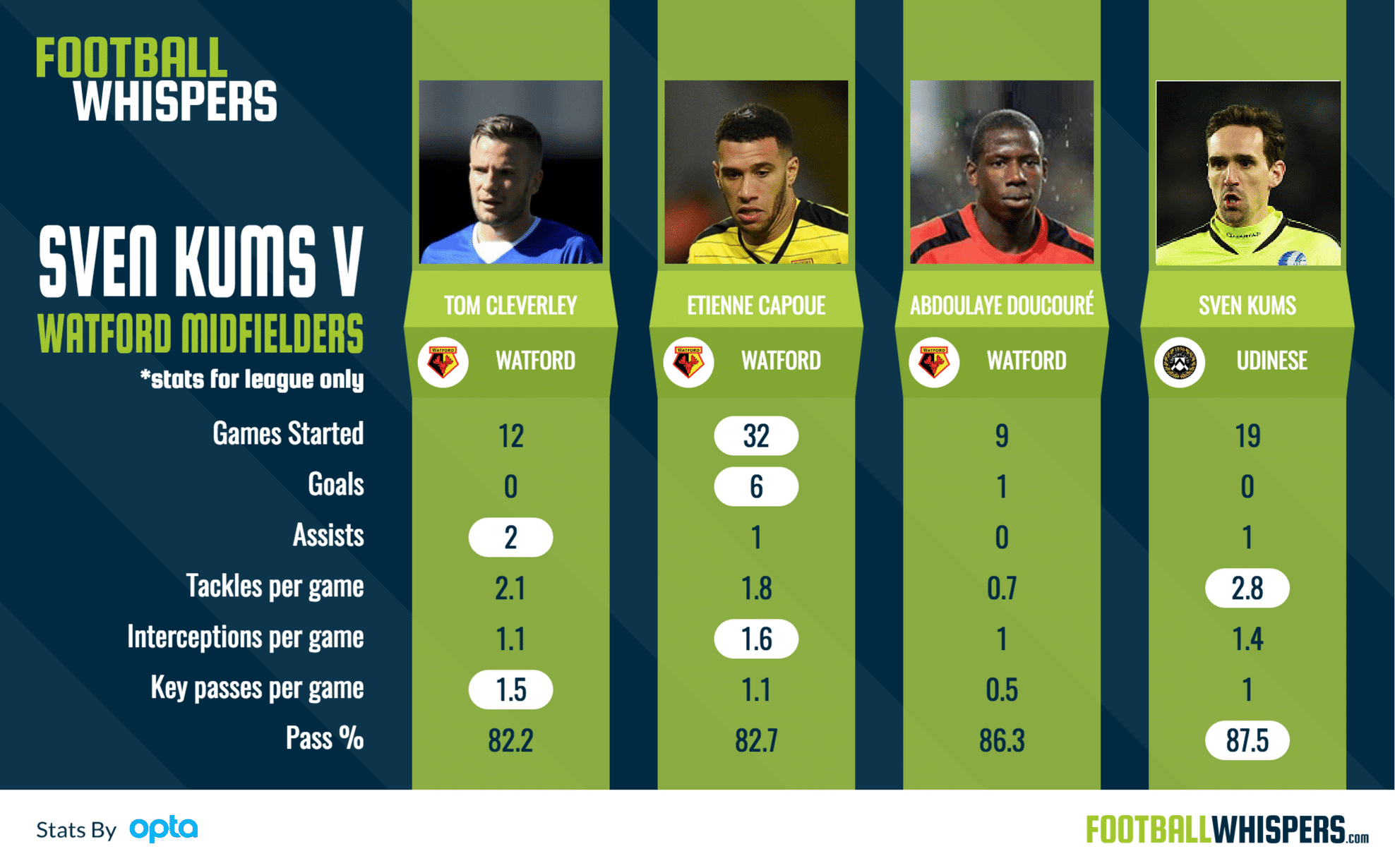 READ MORE: TOM CLEVERLEY PERFECT FOR WATFORD ON & OFF FIELD

As the graphic above shows, Kums has the best passing completion of the midfielders likely to be at Vicarage Road next season but also wins the most tackles – two attributes which don't usually go hand-in-hand.

With the Pozzo model nothing is a given. Even if the Belgian reports back to the Hornets' London Colney training headquarters for pre-season he will have a fight on his hands to prove he is worth one of the 17 places in Watford's squad reserved for non-homegrown players.

Watford have shown in the past that no places are guaranteed. Matěj Vydra and Gabriele Angella both signed long-term contracts following promotion with the Hornets in 2015. But both were loaned out before the Premier League season started and subsequently left last summer with Angella returning to Udinese and Vydra joining Derby County.

After two seasons in the top flight Watford are at a crossroads. This year was always going to be about consolidation but now it is time to decide whether to stick or twist. History suggests the Pozzos tend to take the latter option and for that reason Kums will have to hit the ground running in order to nail down a spot.