He took over a team in dire need of assistance. After finishing second in 2017/18, Monaco were 18th after nine games of the season.

As if the season-to-season decline wasn’t farcical enough, there are reports that the club are ready to bring back Leonardo Jardim, the man who Henry replaced.

It sounds ridiculous, but there’s reasoning to it — the team were playing better under him.

Henry, despite being such an effective forward in his day, has torpedoed Monaco’s attacking production, while failing to improve the defence.

In the past three months, the team have been prioritising possession a little more — fast attacking and long balls a little less — but it’s done them no good.

To be fair to Henry, his side have been a painful combination of unlucky as well as bad. Their chances from open-play would be expected to net them around eight or nine goals, but they’ve only converted six. It’s the same story on the other end, conceding 22 from chances that Football Whispers’ model expected to be worth around 14 or 15.

If the season had started when he took over, then his team would be 16th as well. Two wins in 12 league matches sounds bad, but it is, at least, better than four other sides.

But the actual performances getting worse, having not started in a particularly healthy place, is unforgivable for a team like Monaco. It’s not surprising that he is on the brink of the sack.

From top to bottom

You could say that it’s unforgivable to take a team from the very top to the very bottom of the league at all, in which case bringing Jardim back should be out of the question. You’d have a fair point. However, Monaco is a weird club.

In fairness to the two managers, the squad is an awkward collection of players. There are veterans like Kamil Glik, Radamel Falcao, and goalkeeper Diego Benaglio, and then there are youngsters like Youri Tielemans, Benjamin Henrichs, and Aleksandr Golovin. Seventeen-year-old central defender Benoît Badiashile has played nearly nine full league games.

There’s talent, sure, but, to be pithy, half of it can’t run and the other half don’t know how to run well yet. Out of those who've played more than half of the available league minutes, only one has been in the 23-29 ‘peak age' range. 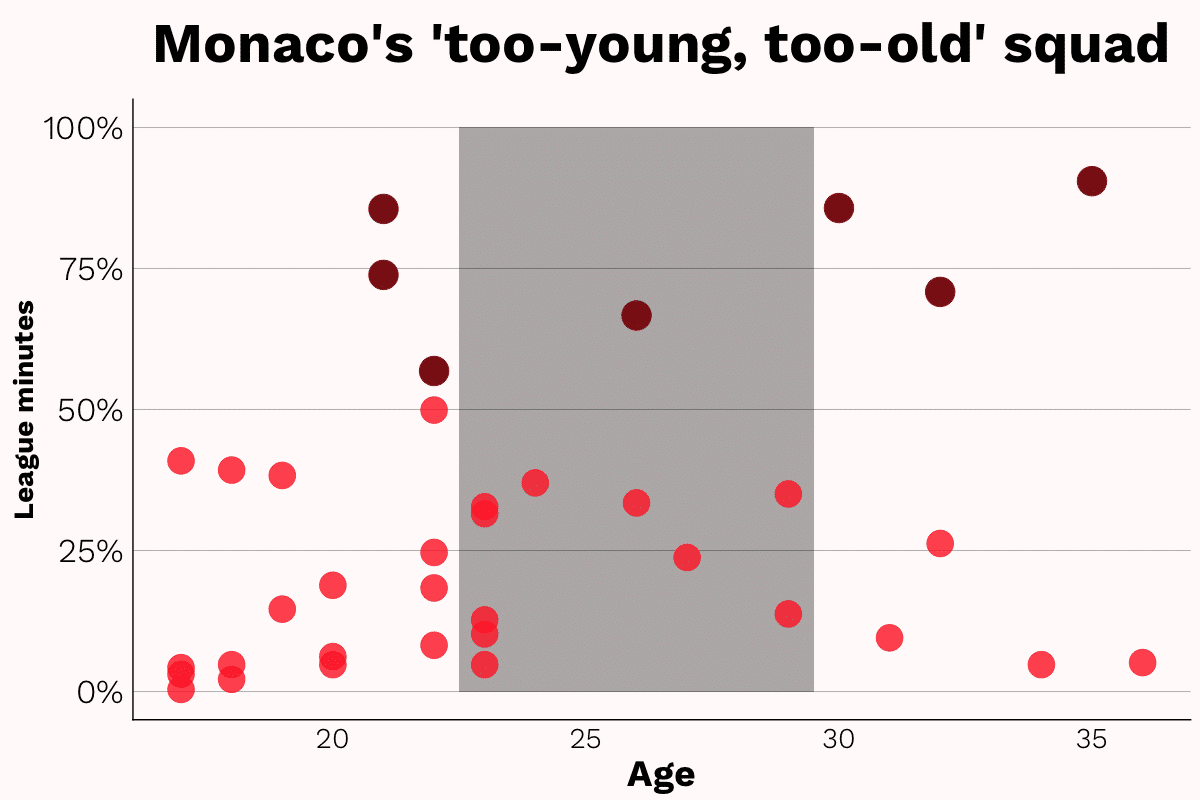 Thirty-five-year-old goalkeeper Benaglio also seems to be pretty leaky, regardless of who’s on the touchline. He’s conceded 4.5 more goals than expected. Only Karl-Johan Johnsson of 20th-place Guingamp fares worse.

Can Monaco be saved? The addition of Cesc Fabregas may bring more quality to the midfield, although it only amplifies the squad age problem.

Keeping men on the pitch will also help. They’ve had the most red cards in Ligue 1 this season (five), recently having to play 83 minutes with ten men in a 5-1 defeat to Strasbourg.

Crashing out of the French Cup to Ligue 2 side Metz has at least gotten most of the embarrassing defeats out of the way. From hereon in they can focus purely on the league.

If they can get back to the performance level of Jardim’s first stint then they should be able to stay up. It’s aiming low, but at the moment, that’s all they’re going to be worried about.