Pep Guardiola has never been a huge fan of formations. Indeed, he has previously described them merely as “telephone numbers.” And yet they remain hugely relevant to his strategy for each game.

This was evident during his first season in charge of Manchester City, where he switched systems depending primarily on the opposition, although other factors, such as injuries to players, suspensions, form considerations and off-pitch issues, also played a part.

The formation may not create the overarching style of play, but can inform its execution. And the ability to change formation on a weekly basis is important to Guardiola, enabling the exploitation of opposition weaknesses and mitigation of their strengths.

So far this summer, the Catalan has continued to tinker with his shape as a host of expensive new signings have joined his squad.

However, over the course of recently friendly clashes with Manchester United, Tottenham Hotspur and Real Madrid, some patterns have emerged – or re-emerged.

How Could Manchester City Line Up In 2017/18… by FootballWhispers

Several formations that were already utilised last term have been on display again in pre-season. The results have generally been promising and, with the quality and quantity of personnel available to him, Guardiola can afford to choose between these different setups going forward.

However, consistency is no bad thing, especially when it comes to forming relationships between certain players and creating a winning mentality. Here, we look at the pros and cons of four systems Manchester City are likely to use in 2017/18. 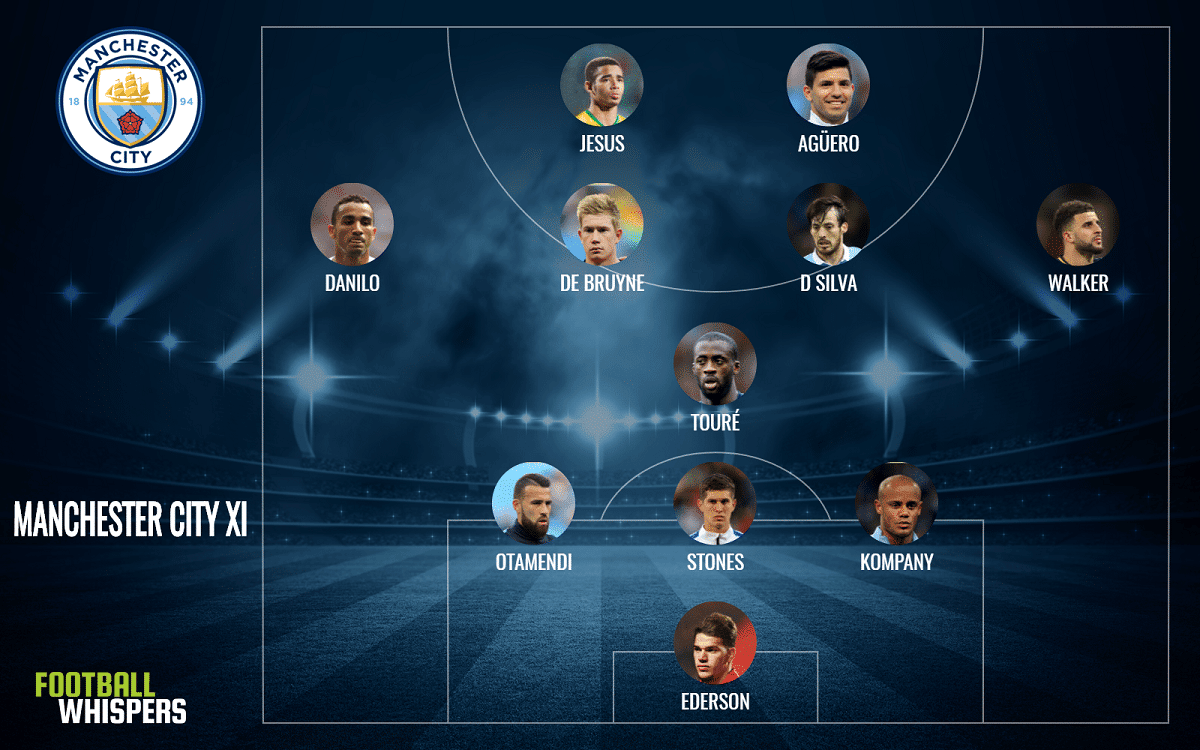 The back three is on trend in the Premier League these days. Reigning champions Chelsea made excellent use of it under Antonio Conte, while Mauricio Pochettino’s Tottenham also experimented with it successfully.

Guardiola also opted for the three-man defensive line on occasions during his debut term in English football, ending City’s rigid devotion to the back four in the process. The 3-1-4-2 was one of his favoured shapes, and he has utilised it well in pre-season thus far.

This is perhaps the most ambitious and adventurous system Manchester City could go for in 2017/18. Not only does it allow for two attack-minded wing-backs and two attacking midfielders, but it gives room for two strikers to lead from the front.

The idea of pairing Sergio Agüero and Gabriel Jesus together is one that must simultaneously excite the club’s fans and terrify opposition defenders – the clinical finishing of the former combined with the pace and movement of the latter makes for a highly potent attacking game.

Kevin De Bruyne and David Silva were often used in deeper positions last term and would have no qualms acting as the linkmen between a deep-lying Yaya Touré and the front two, while Kyle Walker would relish having sole occupancy of the right flank.

However, the 3-1-4-2 remains high-risk. Quick and effective counter-pressing would be possible, but it would also be an absolute necessity to prevent the relatively immobile Toure and a shaky back three being exposed.

Another option to counter this issue would be to use Danilo at left wing-back instead of Benjamin Mendy – the Brazilian, a natural right-footer, could venture inward to play alongside Touré and support the attacks rather than stay wide and leave space open centrally. 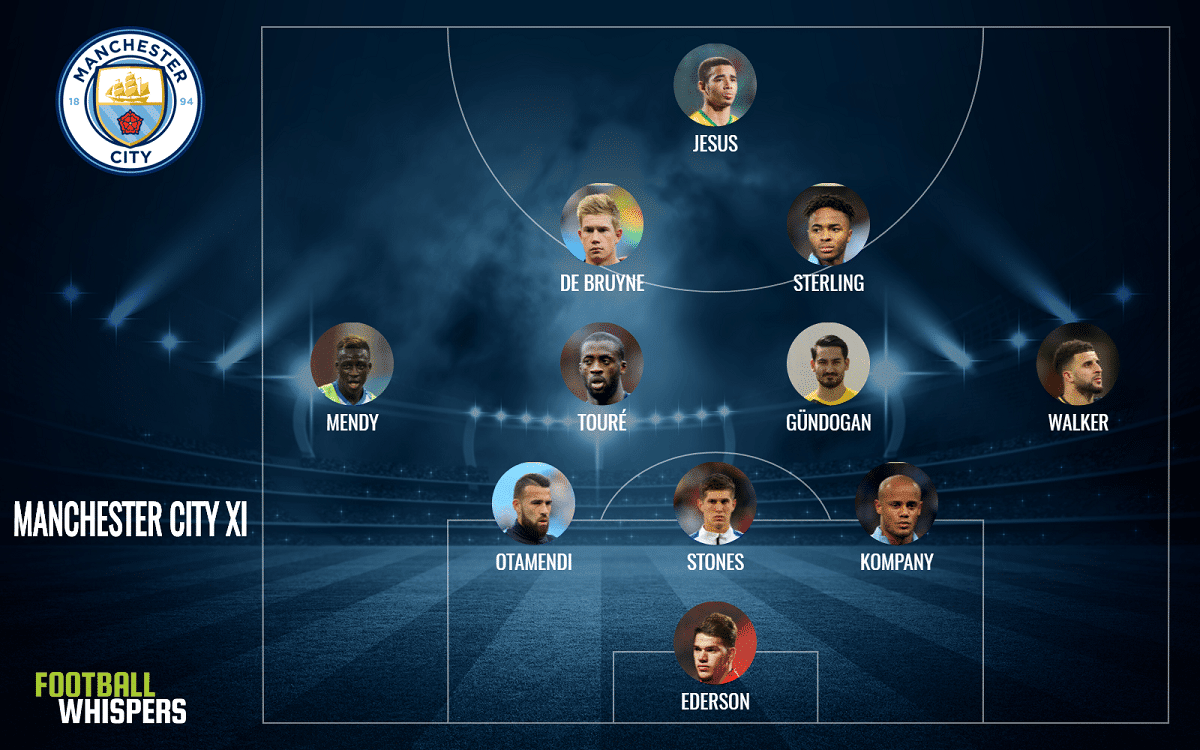 Staying with the back three, Guardiola could be tempted to continue using the rough 3-4-3 shape that worked well in the recent 3-0 friendly win over Tottenham. Once again, the back three would be protected by Touré, though this time additional shielding could be given by Fernandinho.

Alternately, a central midfield two could give room to a slightly more creative individual to play alongside the experienced Ivorian. This could mean David Silva or De Bruyne dropping back to act as playmakers, or it could simply entail welcoming İlkay Gündoğan back into the fold post-injury.

The German looked sharp last season before his enforced absence and, should he return to full fitness, could be the ideal option to fill in the second central role. His vision and incisive passing would help to progress attacks, while his control would help Manchester City to resist pressure during the build-up of possession.

Within the 3-4-3 the wing-backs, Walker and Mendy, would be tasked with keeping the width and stretching the opposition’s defensive block to create space inside for the front three to take advantage of. And the attack would likely be a fluid unit, with plenty of positional rotations to keep markers guessing.

Jesus would be the nominal striker here, though he would probably roam wide and switch positions with two of Raheem Sterling, Leroy Sané, Bernardo Silva or De Bruyne. The only potential issue is the lack of an out-and-out penalty box presence, which might make it difficult to break down defensive opponents. 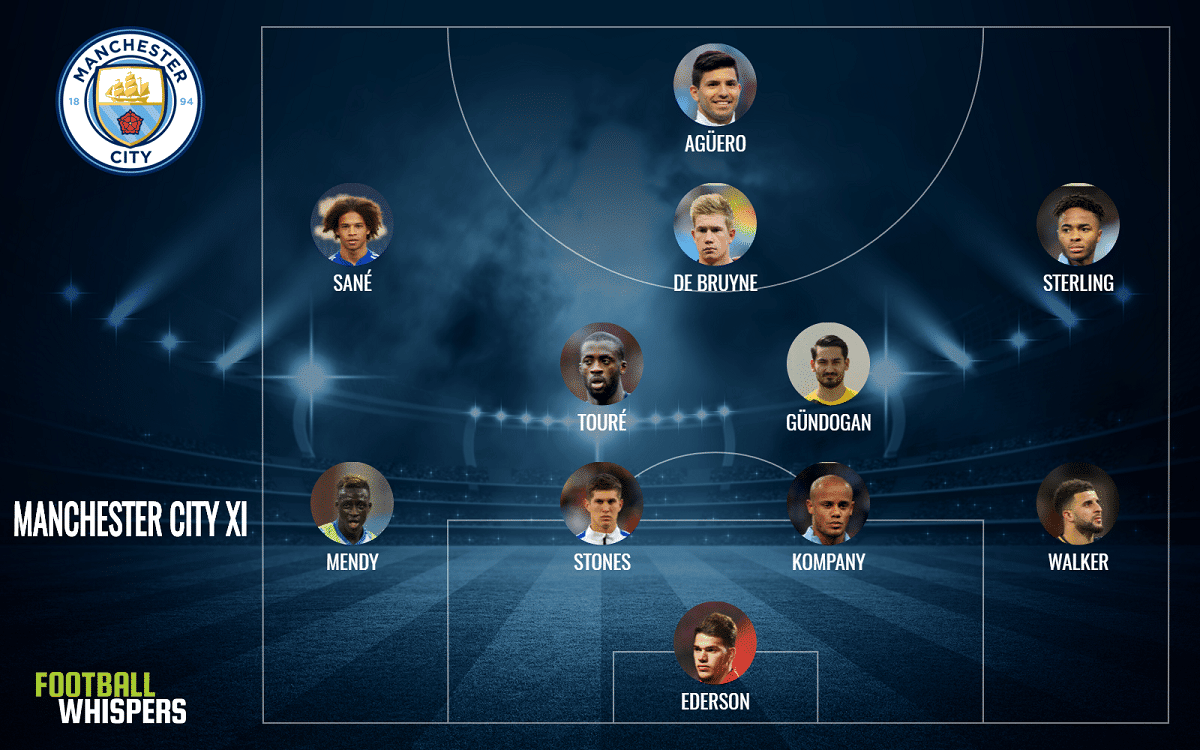 Of all Guardiola’s preferred shapes since taking the reins at the Etihad Stadium, the 4-2-3-1 is unquestionably the most conventional. The system has been in use in the Premier League for many years, taking over from the traditional 4-4-2 in the early 2000s.

Using this formation allows Manchester City to make best use of their natural wide men, Sterling and Sané. With both operating on their favoured flanks, the former on the right and the latter on the left, opposition defences have a hard time dealing with the sheer mobility of the attack.

This system also gives Guardiola the opportunity to play two midfielders in more central roles – perhaps Touré and Gündoğan, though again David Silva and De Bruyne could be opted for – which protects the defence and supports pressing.

Agüero would be best suited to lead the line in this particular setup, as his composure in front of goal and final third instincts would be maximised by the speed and skill of the players around him.

However, defensively there may be issues caused by having a back four that includes two roving wing-backs.

The 4-1-4-1 formation essentially means removing one of the central midfielders and inserting another attacking midfielder.

When used by City it can be a highly fluid shape, sometimes taking on the form of a 4-3-3 when the attacking midfielders drop deep to progress possession effectively, or a 3-4-3 when the wing-backs push up and the defensive midfielder plays closer to the centre-backs.

As systems go, few are as easy to modify in-game as this one, which perhaps explains why it is a preference for Guardiola, a manager who enjoys the challenge of mid-match strategizing.

However, without a genuine top class pivot to dictate possession, it is not as functional as it could be.

While technically adept and more than able to spot a pass, Touré lacks the mobility to move to the speed of Manchester City’s build-up at all times.

Perhaps, then, when Gündoğan is fully fit, he may be brought in to try out in this role instead.

Up front, the movement of David Silva and De Bruyne inside and the speed and skill of two of Sterling, Bernardo Silva or Sané out wide is a lethal combination, while Jesus would lead the line, playing one-twos with the attacking midfielders and ensuring the opposition centre-backs don’t have a clear reference point to mark. 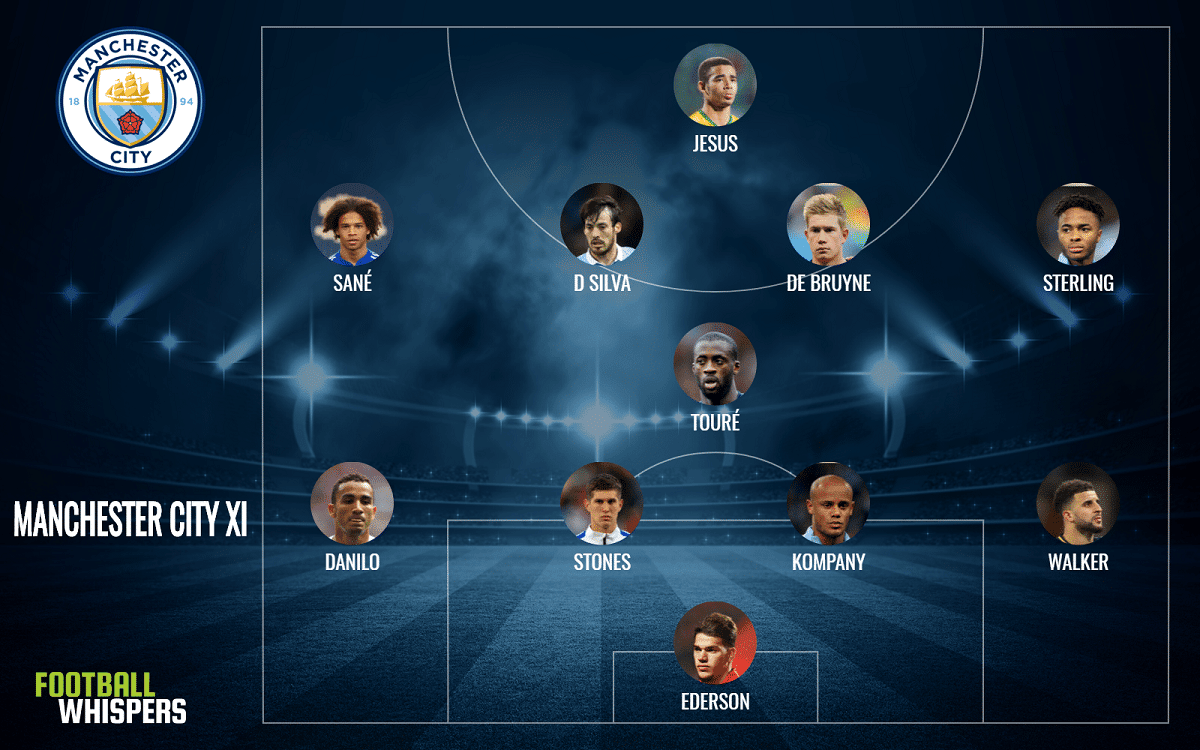