Hull City have pulled off quite the coup in convincing Portuguese manager Marco Silva to call the KCOM Stadium his home, at least until the end of the current campaign. The 39-year-old is highly rated across Europe and was at one stage linked with taking over from Arsene Wenger at Arsenal.

It’s an appointment that’s raised a few eyebrows among the media in England. Hull are in a relegation battle and the default option for clubs in this scenario is to appointment a tried and tested manager.

The likes of Alan Pardew and Harry Redknapp, or like Crystal Palace, Sam Allardyce. Aston Villa went against the grain last season by appointing Remi Garde. That failed and many believed it was because the Frenchman had no experience in the Premier League, let alone in a relegation dog fight. The same applies to Silva. There are also concerns surrounding his limited English when the squad has a strong British core.

However, the young manager has cut his teeth in lower league management in his home country. Silva took over Estoril, a club he made over 100 appearances for and at the time was their director of football, aged just 35. The club where in the second tier of Portugal and struggling in mid-table.

Silva quickly turned things around and they were promoted as champions that very season. In his first campaign in the Primeira Liga, he guided Estoril to a fifth place finish and bettered that the following year by coming fourth.

He was linked with the FC Porto job but it was Sporting Lisbon who made a move and he was appointed as their manager ahead of the 2014/15 season. The Lisbon giants finished in third, a place lower than the season prior to Silva’s appointment but they accumulated nine more points and scored 13 more goals.

For context here, their points tally under him would have won the 2013/14 campaign. He won the Portuguese Cup but was sacked shortly afterwards for not wearing a club suit for the final… It absolutely had nothing to do with the club wanting to poach Jorge Jesus from rivals Benfica. Honest. 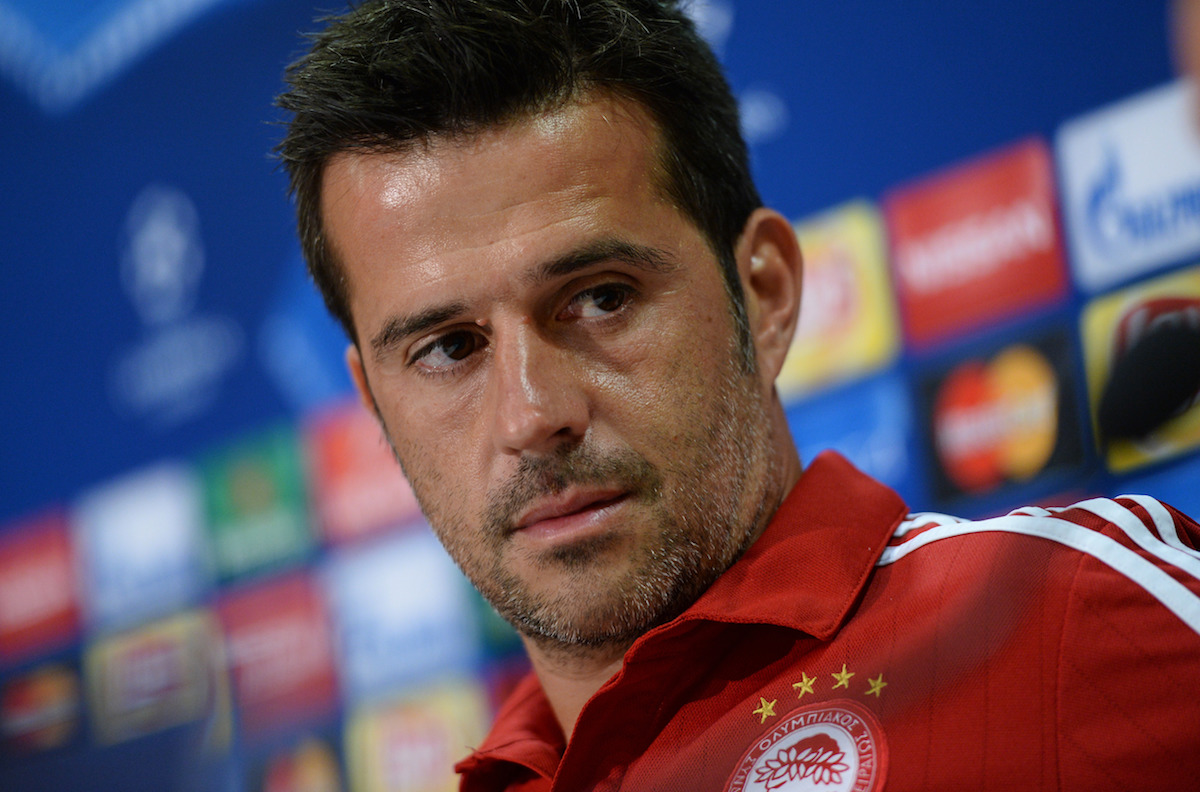 He was appointed as Olympiacos manager in the summer of 2015 and in his only full season there he enhanced his reputation. He broke a European record, 17 successive wins, while guiding the club to their six successive Greek title. He also masterminded a 3-2 win over Arsenal at the Emirates which brought their 12 game losing streak in Europe to an end.

He’s been a free agent since the summer after leaving Greece citing personal reasons. He’s since been linked with moves to Wolves and Watford but it’s Hull who have finally brought him over to England.

What Can Hull Fans Expect from Silva?

Silva is a progressive coach who values hard work and commitment. He’s not progressive in the same way as a Pep Guardiola, and it’s just as well because that’s not what Hull need right now. He’s a believer that a well organised, disciplined unit can beat one made up of star individuals, and that should suit the Hull players, if they buy into it.

He likes his team to play expansive football but doesn’t neglect the defensive side. At Olympiacos his team conceded, on average, just the 0.53 goals per game. Sporting conceded 0.85 goals under his guidance and Estoril conceded just 0.86.

Hull are currently conceding 2.2 goals per game. If they’re to have a chance of staying up then Silva will have to look at the defensive set-up and add some resiliency to it.

To the delight of Andrew Robertson, his teams like to use the full-backs as an attacking outlet. The highly rated Scot may become an integral part of the new manager’s plans. 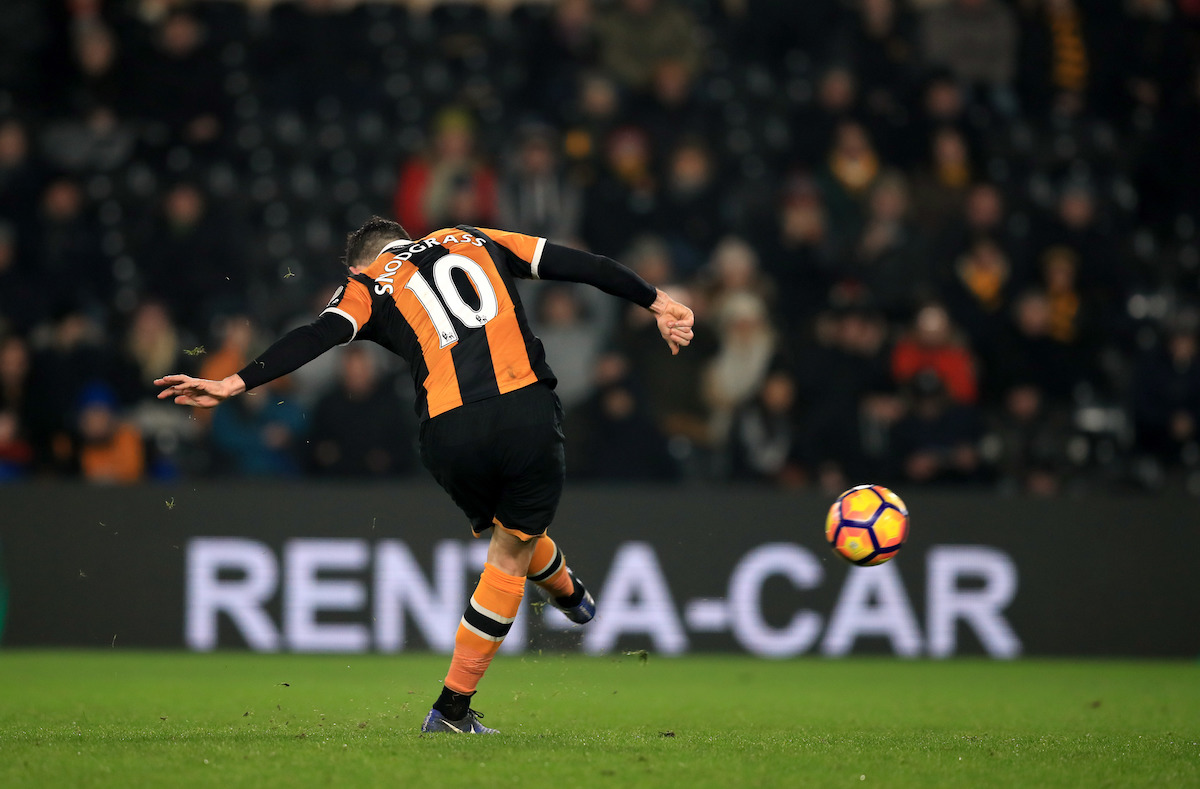 Silva’s team's also use set-pieces as a weapon of choice. Both his Sporting and his Olympiacos side scored a high number of goals after making the most of a corner or a free-kick in the opposition's half. With Robert Snodgrass at his disposal he has a player capable of causing havoc from these situations and he may look to take advantage of this.

He’s a manager who understands the importance of protecting his centre-backs. Sometimes in the Premier League managers leave their centre-backs exposed and despite playing good football end up on the receiving end of a heavy defeat.

He often uses two deeper sitting midfielders ahead of his centre-backs in a 4231 on paper and this allows his full-back’s to push on and offer the width to the team. Similar to how Liverpool have been playing under Jurgen Klopp this season but instead of having just the one midfielder protecting the midfield he uses two. 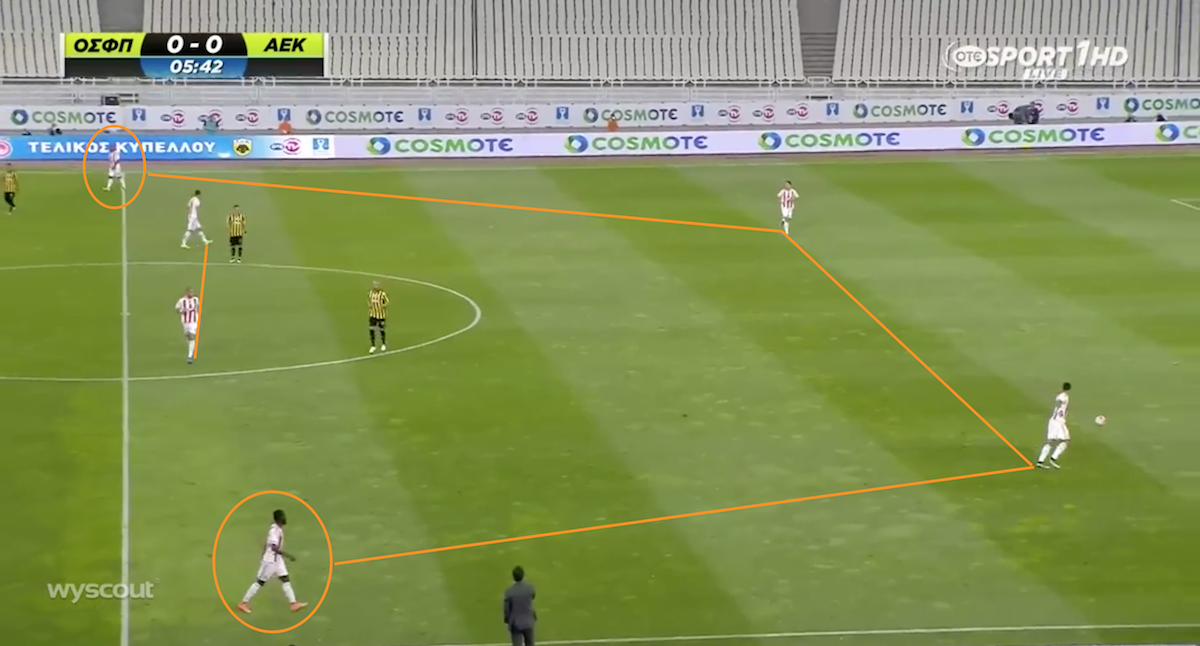 The picture above shows how Silva’s sides start attacks from deep. As soon as the ‘keeper plays the ball out the full-backs push on. However, depending on which centre-back has the ball, it has an impact on which full-back pushes on the furthest.

In the image above the ball is played to the left sided centre-back meaning the left-back isn’t as adventurous as on the opposite flank to ensure he’s a passing option for the man in possession. The two centre-midfielders then move accordingly to where the ball is to make up passing triangles, in the hope they can build defence into attack as a team.

Of the current squad at his disposal he may entrust Sam Clucas and Jake Livermore as the two in midfield. The aforementioned two both attempt, on average, more than 40 passes per 90 minutes and complete 85% of their attempts, meaning they’re a good enough option to have on the ball in these key areas if Hull want to retain possession. 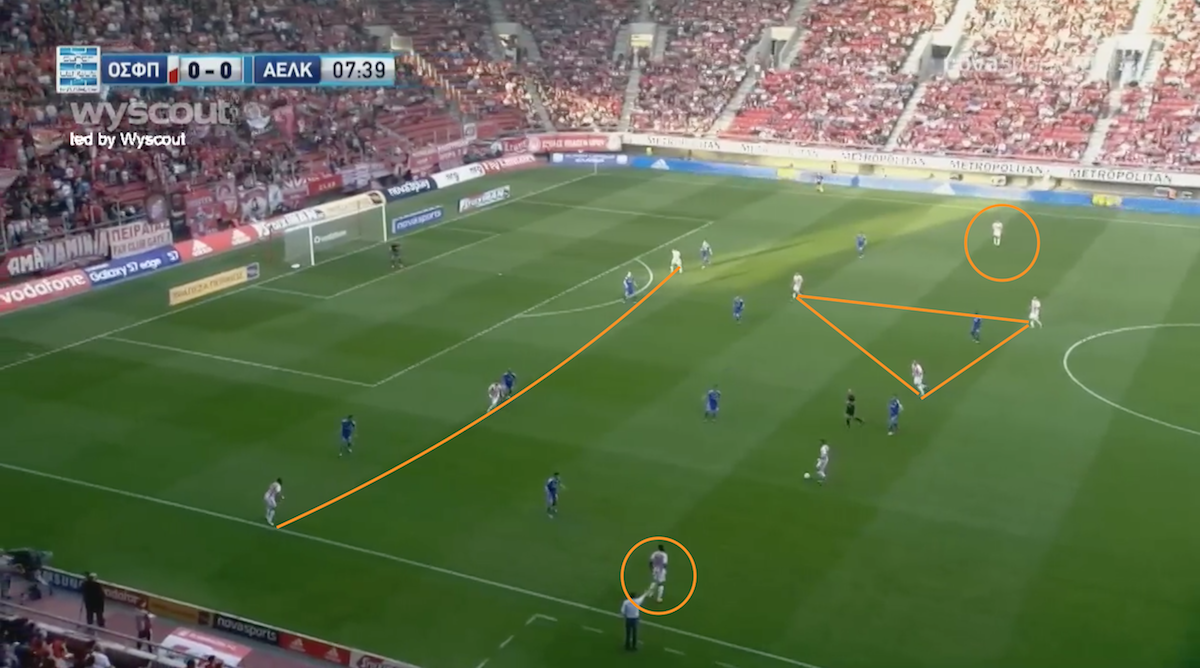 As previously mentioned, Silva plays a variation of a 4231 formation. In the picture above the two wide players behind the striker have pushed on to make a three in attack which occupies all four opposition defenders.

The full-backs, circled in orange, have pushed on to support the play and in the centre you see the two centre-midfielders and the attacking midfielder in a triangle. The man in possession is the left sided centre-back.

The opposition have all of their outfield players in their own half and what should be a pretty congested pitch has glaring gaps due to the movement of the Olympiacos players. 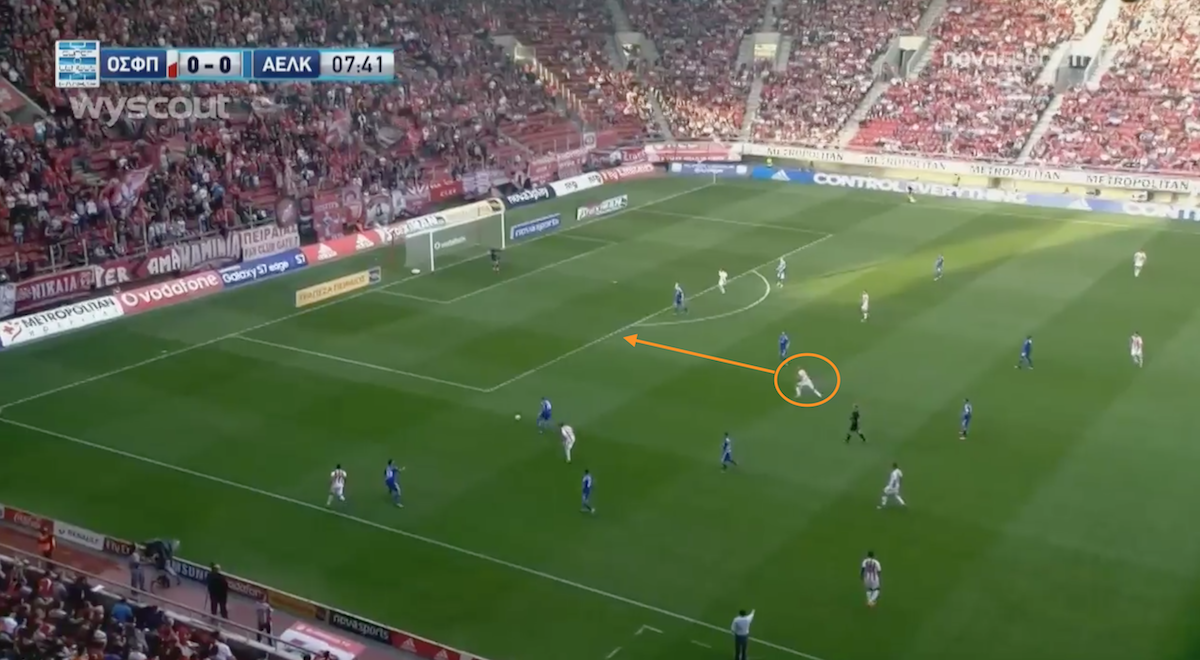 In the second picture you see how the centre-midfielders in a Silva system aren’t shackled to defensive duties. They’re both box-to-box midfielders but they both have to be aware of what the other is doing. In this instance the left sided centre-midfielder breaks from his position to exploit the space and supports the attack.

The ball is worked forward and played into the area which has been vacated by the right centre-back. The Olympiacos centre-midfielder drives into the space to get onto the end of the pass. It’s something that Clucas definitely has the ability to do having done so in matches for Hull this season when they’ve played a midfield five. 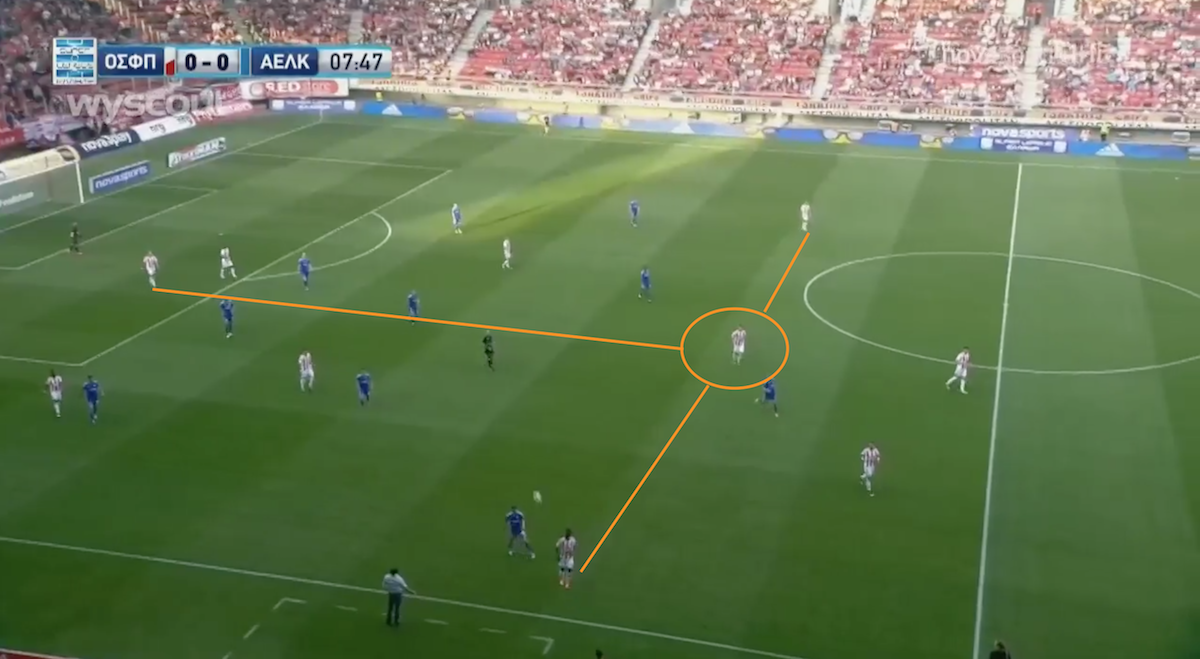 The attack comes to an end and despite committing a centre-midfielder to the attack Olympiacos aren’t exposed defensively. The other midfielder held his position and the full-backs stayed in line with him. The ball is played forward and they have five players in defensive positions ready to recycle the ball forward.

Silva manages to find a balance. They don’t overcommit but they support. His teams aren’t recklessly joining the attack but they aren’t leaving the attackers isolated. It’s unlikely Hull will be as dominant as this under him but against lower league rivals they may be able to assert some dominance.

Like all good managers, Silva doesn’t have a one system fits all mentality. Sometimes his teams will play a high press whereas other times it will be a half-press. Under previous manager Mike Phelan, Hull often used a half-press so the players have experience playing such a system. 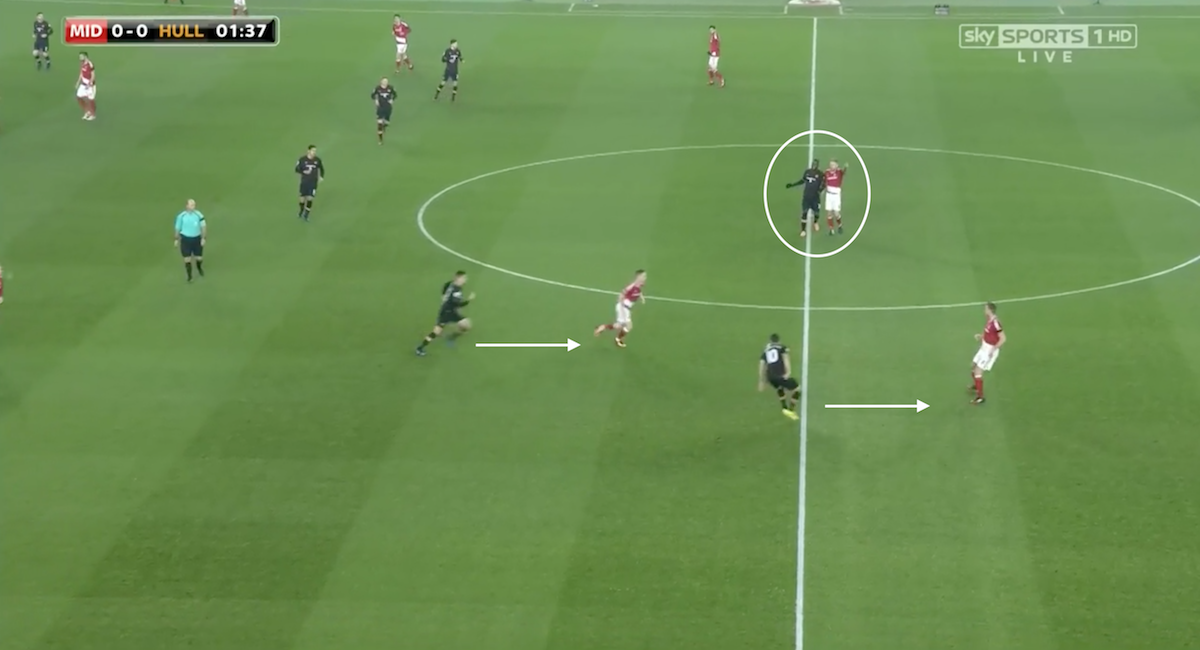 In the picture above you see the Hull midfield breaking from their defensive positions to engage with the ‘Boro players as soon as they come into their areas of the pitch. They literally chase them away and then retreat to their position. 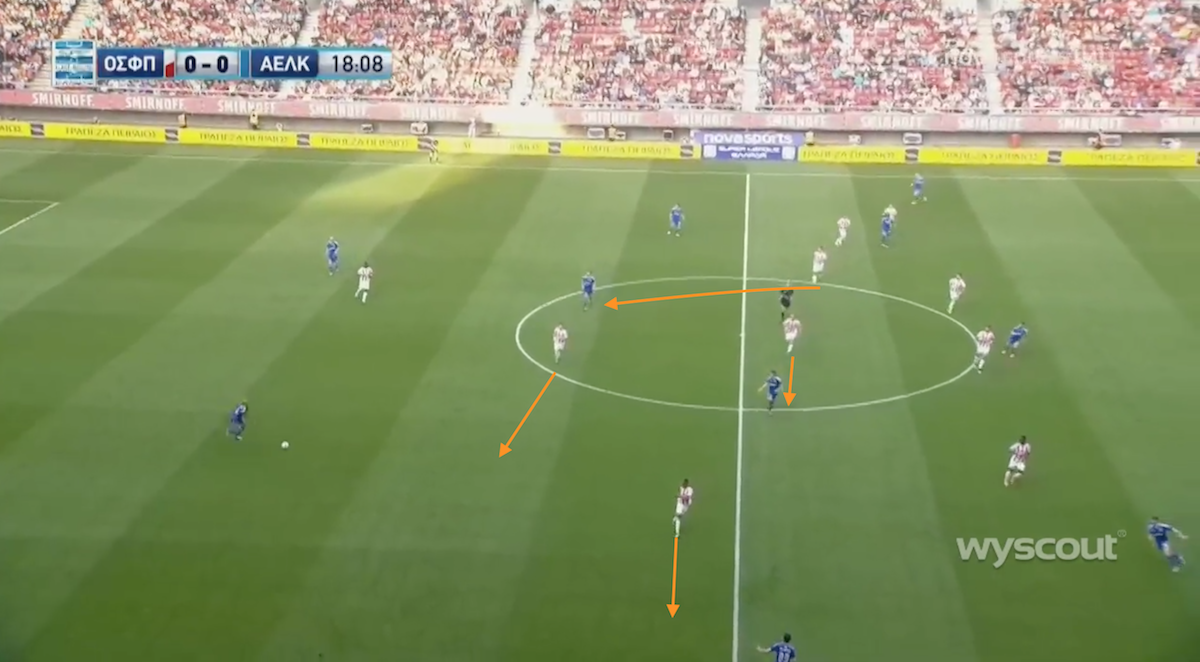 Olympiacos at times played a similar sort of press. There are two lines of four in the above picture and then two staggered attackers looking to press the defenders in possession.

The home side break from their defensive lines to engage with the players if the ball is in their area and are looking to dispossess them and spring a counter. It’s a pressing trap Hull players will be familiar with.

Not only that though, they have the players who could excel in such a system. Abel Hernandez, Dieumerci Mbokani and Adama Diomandé are all suited to a counter attacking system and all have the ability to cause some damage playing in an attacking three.

Can Marco Silva Be A Success At Hull City?

Silva’s systems require hard working players and Hull have just that. It’s a far from perfect project but he’s the sort to revel in this opportunity to improve players on the training field. He’s another manager who could add fuel to the fire that you don’t need to invest heavily to improve a squad.

As for concerns over the language barrier, the cliched football manager gaming series response goes “football is a universal language” and Silva’s lack of English shouldn’t be a concern. After all, It didn’t hinder Mauricio Pochettino. In many ways the two managers are similar. Both are tactically switched on and neither have the showmanship of an Antonio Conte or the arrogance of a Jose Mourinho.

It’s a brave appointment but fortune favours the brave and it could pay off. Hull City are still in the League Cup and a win against Manchester United could go a long way to justifying his appointment.