Brazilian midfielder Andreas Pereira has returned Manchester United ahead of the coming season having grown and matured as a player while on loan with Granada in La Liga last term.

Although the Andalusian side were ultimately relegated from La Liga, the 20-year-old playmaker's time in Spain was a resounding success on a personal level, leading many to believe that he is now ready to make an impact at Old Trafford.

In 35 appearances for Granada, Pereira scored five times and registered three assists, but the developments he made in La Liga cannot be quantified in such simple terms.

The level-headed youngster relished in his role as a key player for the Spanish strugglers, never hiding when the chips were down and bringing energy, tenacity and quality to his side's play.

Playing in a multitude of positions, the Belgium-born Brazil under-23 international demonstrated the kind of work rate that will have impressed José Mourinho back in England, as well as raising the general level of play of those around him through intelligent and efficient use of the ball.

Pereira showed the full gamut of attributes desired of a creative midfielder within a Mourinho team with Granada, showcasing vision, superlative technique and a sharp eye for goal, but marrying his technical skills with the kind of work ethic and burning desire to succeed and improve that the United boss demands of his charges.

Yet, more than simply appearing to be the kind of workhorse the former Inter Milan and Real Madrid boss prizes, Pereira also showed he posses the requisite inventiveness and flair to endear him to the Old Trafford support.

His stunning flick-up-and-volley strike against Las Palmas in February was a goal of the season contender and the kind of effort that few players have the confidence or quality to take on. In January, the dead-ball specialist sumptuously rolled a 20-yard free-kick under the Espanyol wall to outfox goalkeeper Diego López.

Granada were destined for the drop from the off, and they eventually finished rock botton with just 20 points to their name. But rather than being a dining indictment of Pereira as a player, the fact that he was still able to muster the will and determination to keep fighting, to keep producing impressive displays on a weekly basis, is testament to his character and readiness for the next step in his career.

Upon returning to Manchester, Pereira deserves to be given a crack at becoming a regular feature of the Red Devils' match day squad. A weekly starting berth for the Europa League champions would be a stretch too far for the youngster at this stage, but rotational slot would be perfect.

Such a role would allow the former PSV Eindhoven academy player to rack up 20-plus appearances in all competitions in 2017/18, giving him semi-regular exposure to first-team life at Old Trafford, yet guarding him from the pressure of being expected to deliver the goods at the highest level.

What's more, Pereira's versatility will make him a valuable option for Mourinho. The Portuguese tactician has spoken of his desire for “specialists” within his squad, but a young player able to plug holes in multiple positions has plenty of worth.

Pereira is comfortable on either flank, centrally as a No.10 or deeper as part of a midfield three. When teenage defender Axel Tuanzebe broke into the senior side towards the tail end of last season, his multi-functionality saw him appear more regularly than would have been the case if he could only operate in one role.

In playing Pereira, Mourinho would not just be clocking game time for a player who offers little while he is still developing; far from it. The 20-year-old is a fine passer, a gifted dribbler, can time runs into the box to perfection and finishes well when he gets there. 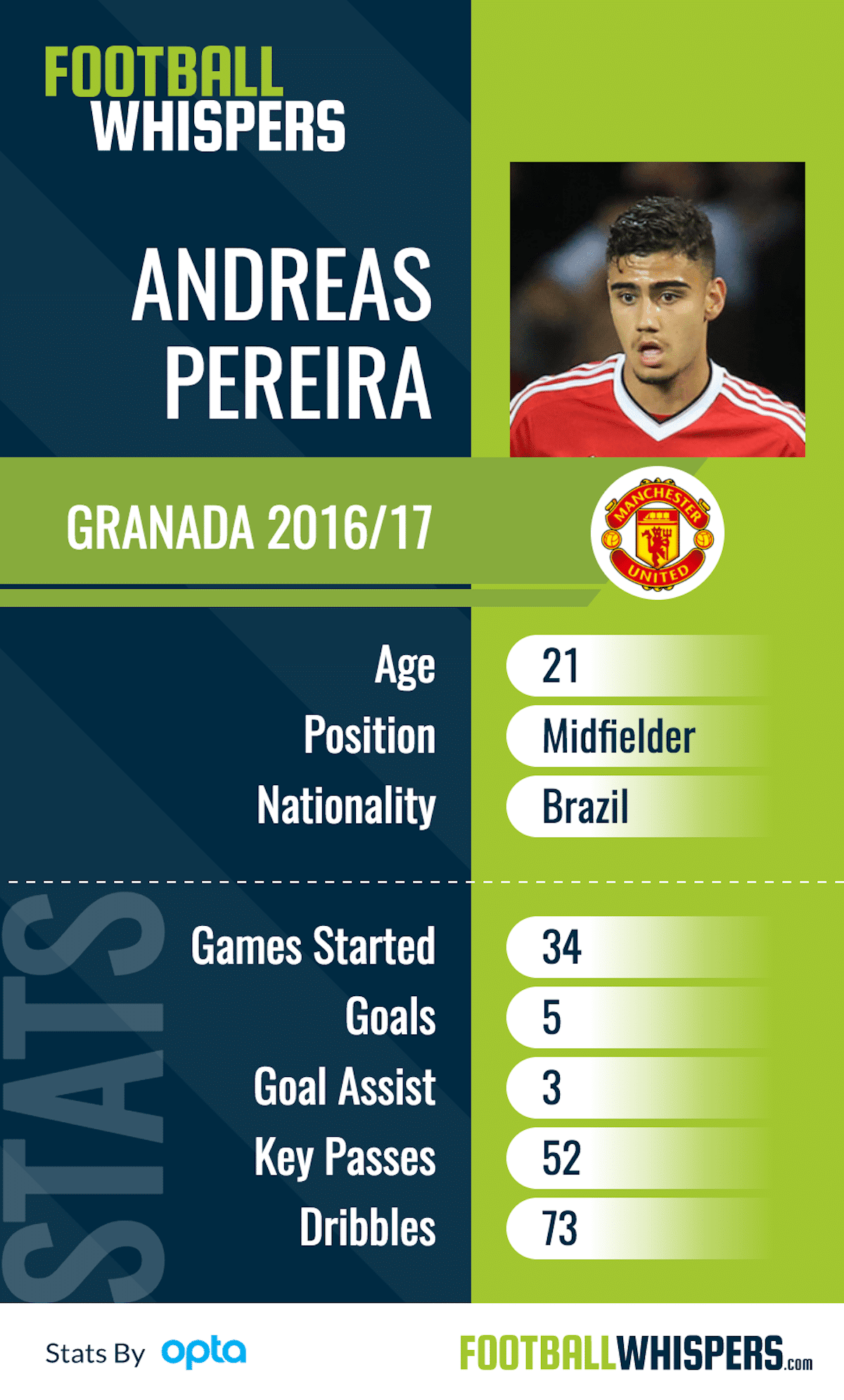 He is also a set-piece maestro, as evidenced by the stunning free-kick he curled home against Ipswich Town in the League Cup two seasons ago, as well as the goal he scored directly from a corner in an under-21 outing against Tottenham Hotspur in September 2015.

Pereira is not just ready to take part, he is ready to contribute.

Named as part of United‘s squad for their pre-season tour of the USA, the young midfielder will be under the watchful eye of Mourinho and his staff. Auditioning for his place in the Premier League squad for the coming season; impress, and Pereira will be given a chance; any stutter-step could result in another loan elsewhere.

But Pereira, humbly confident and with a positive outlook, will back himself to make an impact.