What Perišić Brings To Man Utd

Manchester United‘s pursuit of Ivan Perišic has dragged on much longer than most expected it to.

José Mourinho has identified the Croatian winger as one of his top summer targets and the Red Devils have reportedly lodged multiple bids in excess of £40million for the 28-year-old.

However, Inter Milan have remained resolute in their refusal to accept anything less than £49million for the player they signed from Wolfsburg two years ago, and are now, according to Italian journalist Gianluca Di Marzio, even demanding that a season-long loan of Anthony Martial be included in any deal.

Despite the stalemate in negotiations, a deal is still expected to be done in the near future, with Perišić's arrival at Old Trafford feeling inevitable.

Mourinho seems desperate to broaden his attacking options, with Zlatan Ibrahimović and Wayne Rooney having both left the club.

Romelu Lukaku has been brought in from Everton for £75million but a versatile wide player could be an real asset for United in the coming season and Perišić is certainly that.

The wide players currently at Mourinho's disposal all fit a relatively similar profile: whether it's Juan Mata, Martial, Henrikh Mkhitaryan, Jesse Lingard or Marcus Rashford starting on the flanks, all look to come inside into central zones if the opportunity presents itself.

United don't have a genuine, natural winger among their number and their attacking play can, at times, become predictable as a result. The addition of Perišić will give the Old Trafford side a more varied approach, keeping opponents guessing as to whether to overload the central area or deny space out wide.

The former Borussia Dortmund man's instinct is to attack space, whether inside or outside. He is, however, much more comfortable taking on his opposing full-back down the flank and whipping crosses into the box that any current United player.

Key to his ability to get to the byline is his unpredictability. The 57-cap Croatia international is two-footed, meaning he is just as comfortable dribbling to a defender's left as he is to the right.

When one-on-one, Perišić's markers find it doubly difficult to anticipate his movements due to the fact that he displays none of the tells which usually betray which direction a wide man intends to move. 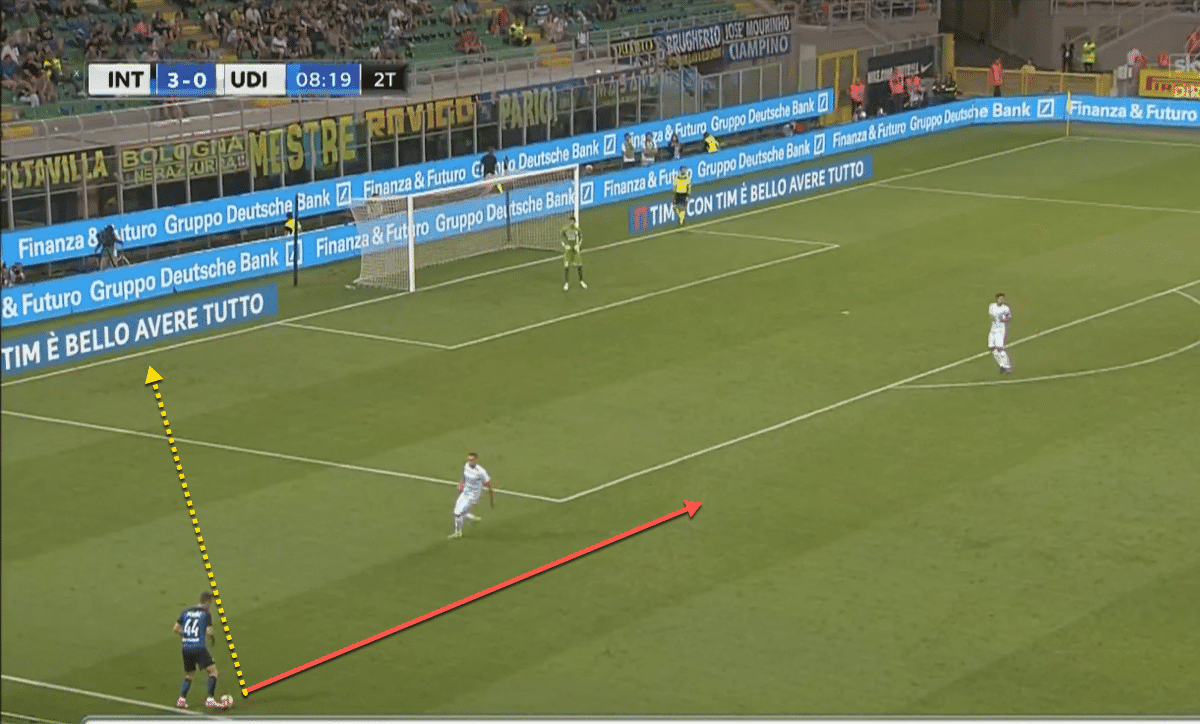 Here we see Perišić pick up the ball wide on the left against Udinese. In a similar situation Martial, for example, being right-footed, would ordinarily look to cut infield in the direction marked by the red arrow.

Perišić, however, opts to break for the byline. 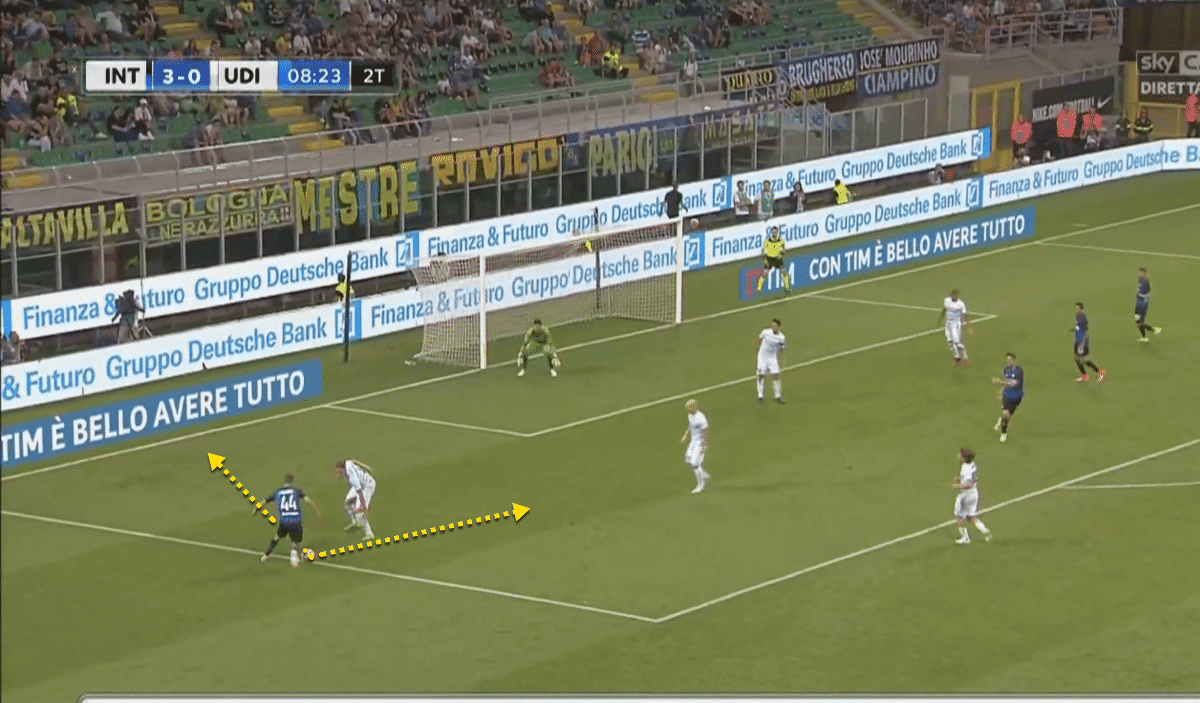 When faced up by the defender, he uses a couple of step-overs to faint a movement in either direction, with his body shape allowing him to quickly burst left or right, showing no sign of his intentions to the full-back. 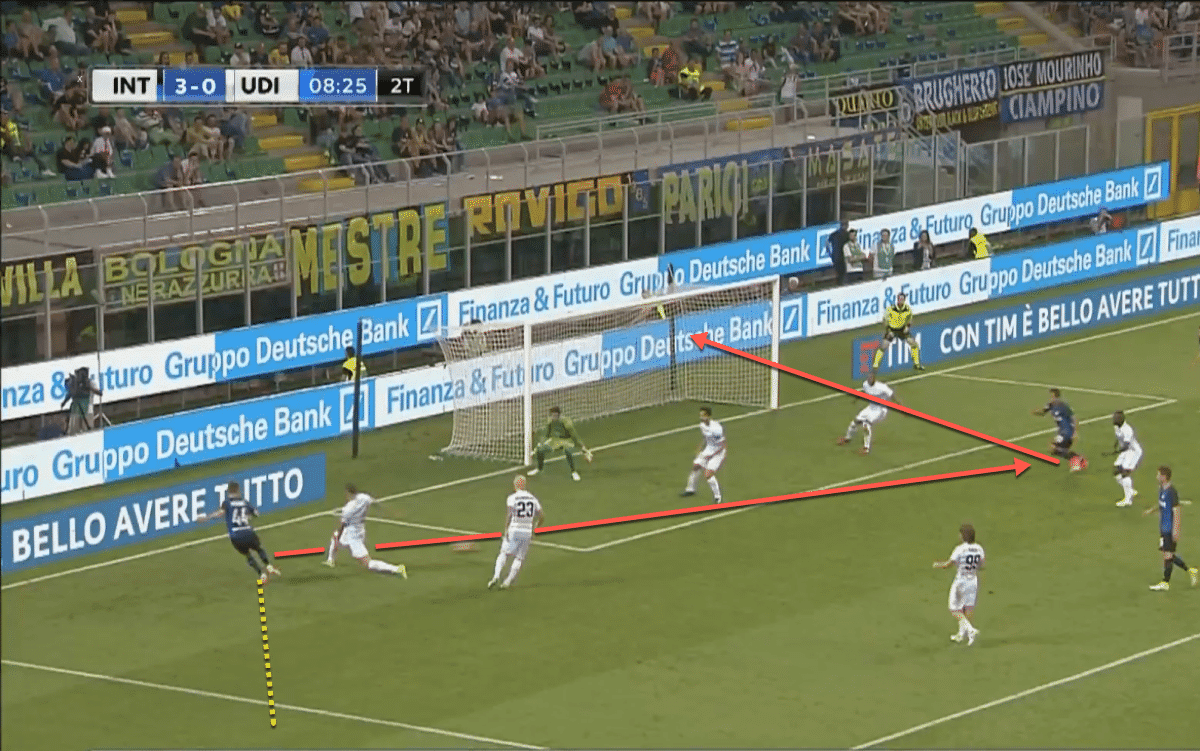 Perišić chooses to dribble around the outside and produces a perfect cut-back to the edge of the six-yard box where Éder has an easy tap-in. One of eight assists he registered in Serie A last term – Martial and Ander Herrera were United's top assist-makers with six apiece.

In such fashion Perišić conjured 61 scoring opportunities in league action in 2016/17, more than any of Mourinho's men – Paul Pogba was closest with 57. This ability to pull wide and play the ball into the box would meld perfectly with new signing and former Chelsea transfer target Lukaku's skill set. The Inter winger also created more clear-cut chances than any player in Serie A last season (16).

This isn't to suggest the Croatia star is some form of mesmeric wing wizard, though. He is fairly quick without being rapid and a solid dribbler without being spectacular. His average of 1.3 successful take-ons per 90 last season was equal to Ashley Young and Antonio Valencia's return for United, and some way behind Pogba (2.5), Martial (2.5), Rashford (2.1) and Mkhitaryan (1.7). Even Lingard was a marginally more frequent dribbler (1.4).

In addition to his ability to hit the byline and cross, Perišić also has a wonderful knack for finding space within the penalty area. 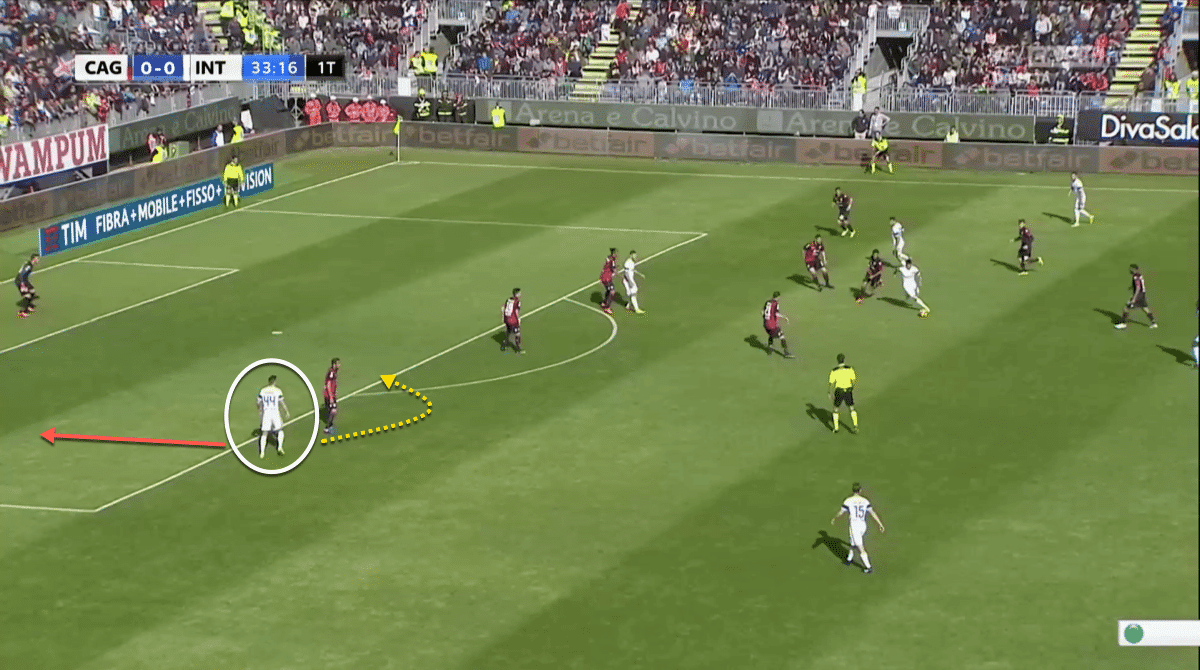 Here, against Cagliari, Perišić is on the shoulder of the right-back but spots the right-sided centre-back had been drawn too far over to the left, so he expertly curves his run into the neglected space. 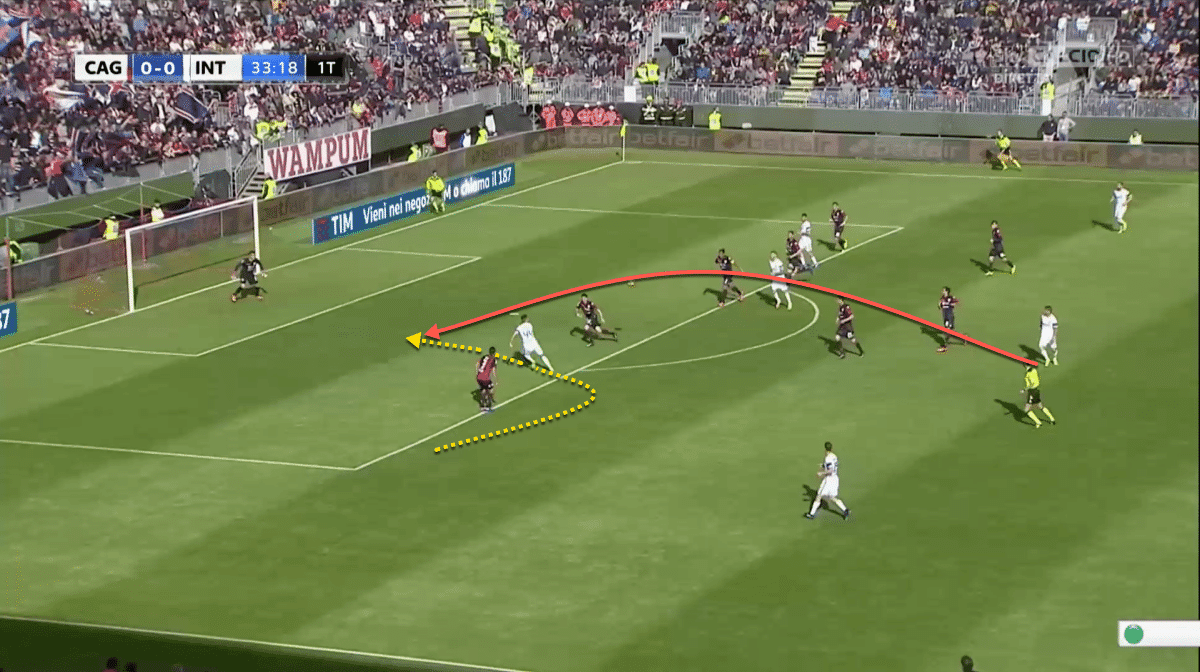 His run is located by a perfect lofted pass from Éder, leaving Perišić one-on-one with the goalkeeper if his touch is good. 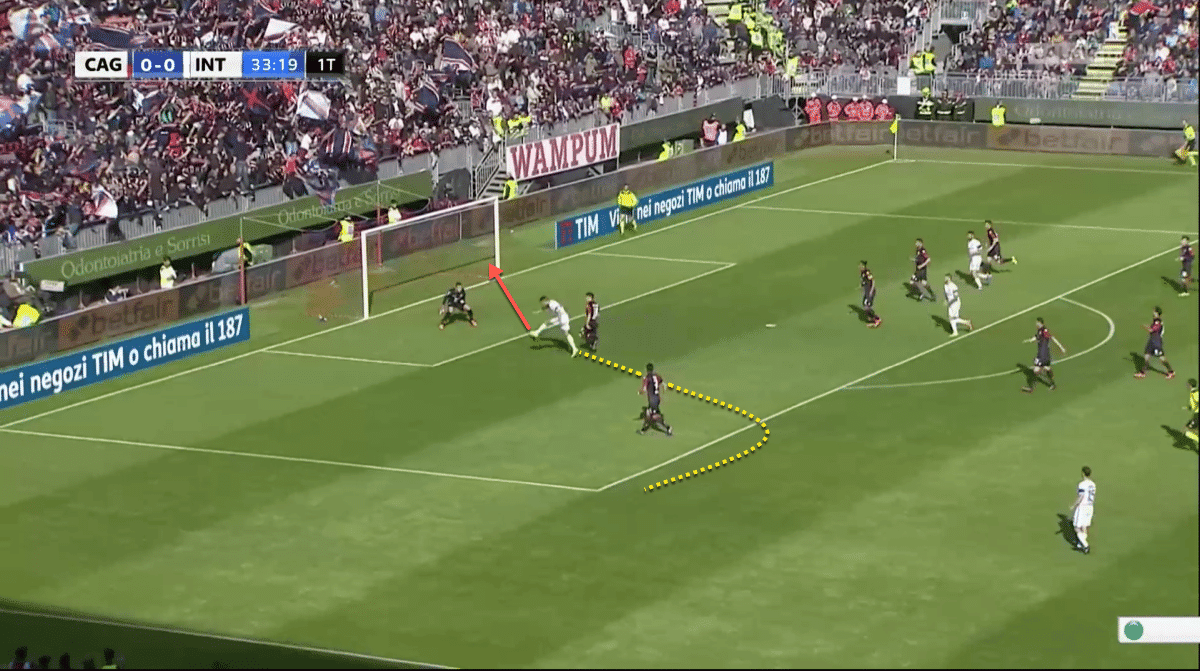 Bringing the ball under control with his right foot, he smashes into the far corner with his left, never breaking stride. This kind of intelligent movement often sees Perišić pop up unmarked at the back post, a trademark of his game which helped yield 11 Serie A goals last season.

Aside from his offensive production, the Split-born player is a hard worker, always willing to press high and diligent in his back-tracking duties to help out his full-back. These traits, as much as anything else, will be why Mourinho is so desperate to land the Croatian.

Additionally, his two-footedness and work ethic means than he can easily adapt to playing on either flank, and can even do a job at wing-back if required.

There are downsides to Perišić's game, however, which have perhaps prevented him from every truly being considered an elite-level winger.

The 28-year-old can be a frustrating figure at times due to the fact that he is not as efficient as might be expected. For all the crosses he attempted last term (239), he averaged just 1.1 accurate deliveries per game.

This can be a result of his attacking colleagues not getting themselves into the right position to take full advantage of his centres,. But it is also evidence his approach is often one of quantity over quality.

The same applies to his shooting. There is no doubt that Perišić's return of 11 league goals in 2016/17 was impressive; only Ibrahimović (17) managed more for United.

But he took a staggering amount of shots to get them  – 104, in fact; again, only the towering Swedish striker could top that figure for United (115). This means that Perišić's conversion rate for last season was a less-than-impressive 10.58 per cent.

What's more, Perišić aimed for goal from outside the penalty area 24 times in Serie A last term but didn't score once from such distance. Often times, he showed poor decision making in taking on a low-percentage shot from range when team-mates were better placed. 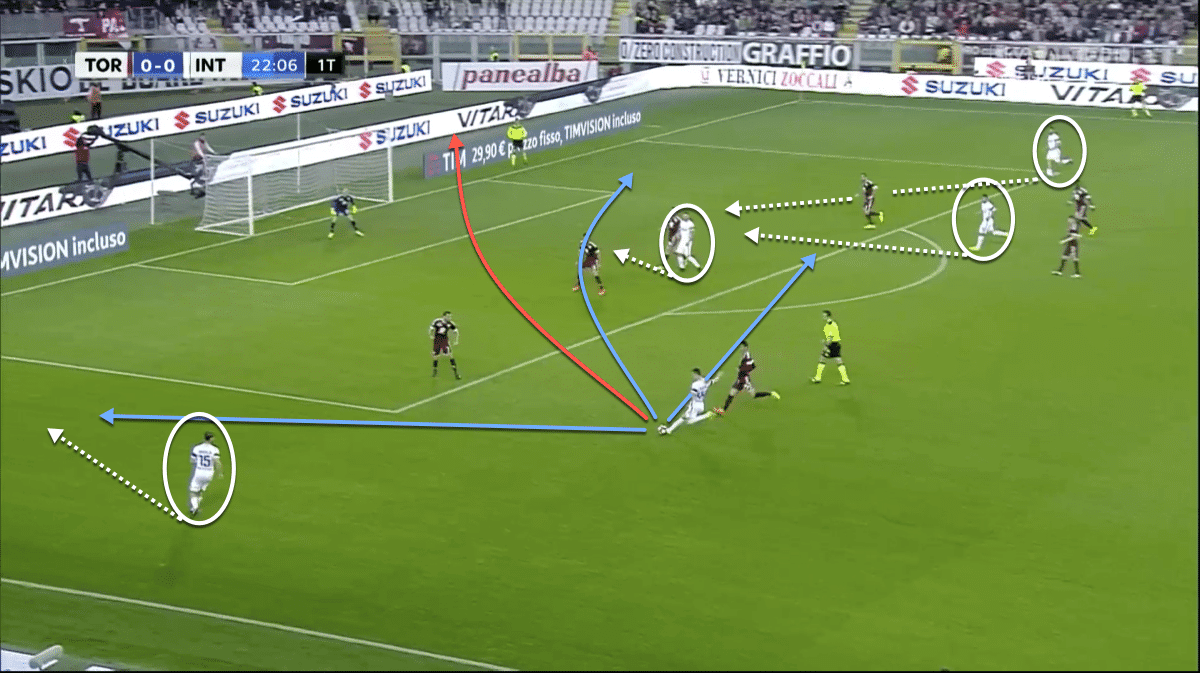 The above still, taken from a game against Torino last season, shows Perišić taking a long-range, low-percentage shot when there were better options available to him.

He ignores the runs of well-placed team-mates (circled white), opting not to take any of the viable passing and cross options highlighted by the blue arrows, and instead shoots for goal (red arrow), missing the target by some distance. 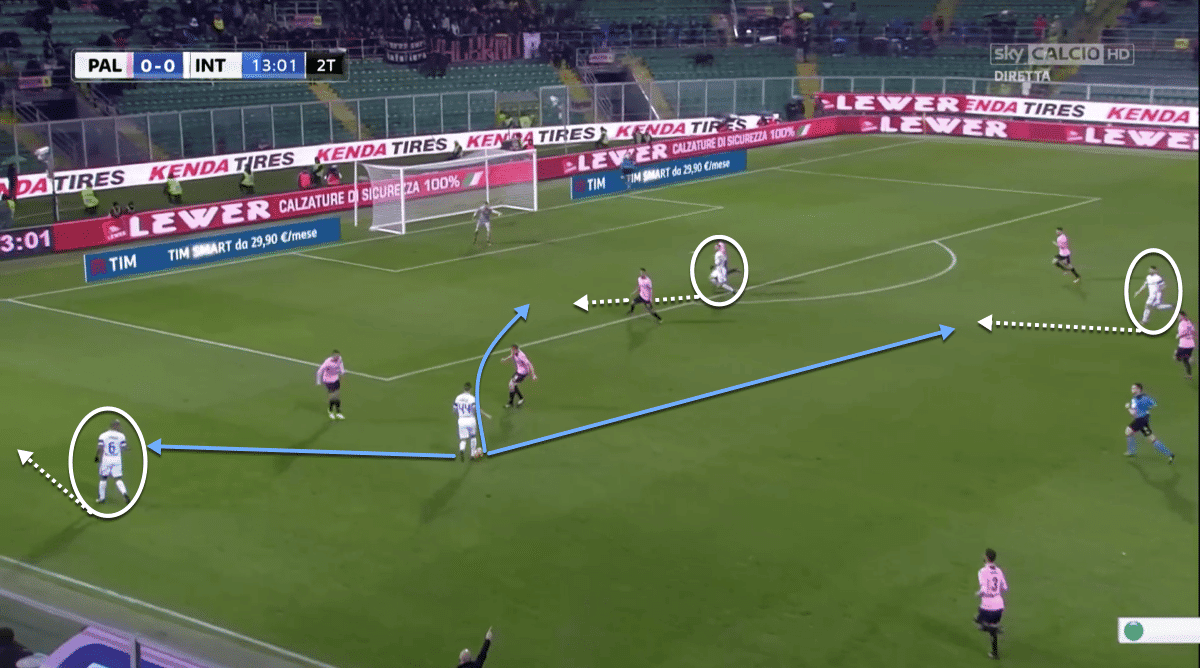 It's a similar situation in these images, from Inter's trip to Palermo, too. In the inside-left position, Perišić has striker Mauro Icardi making a good run into the box, a midfielder breaking into space, and a full-back with open acreage on the left. 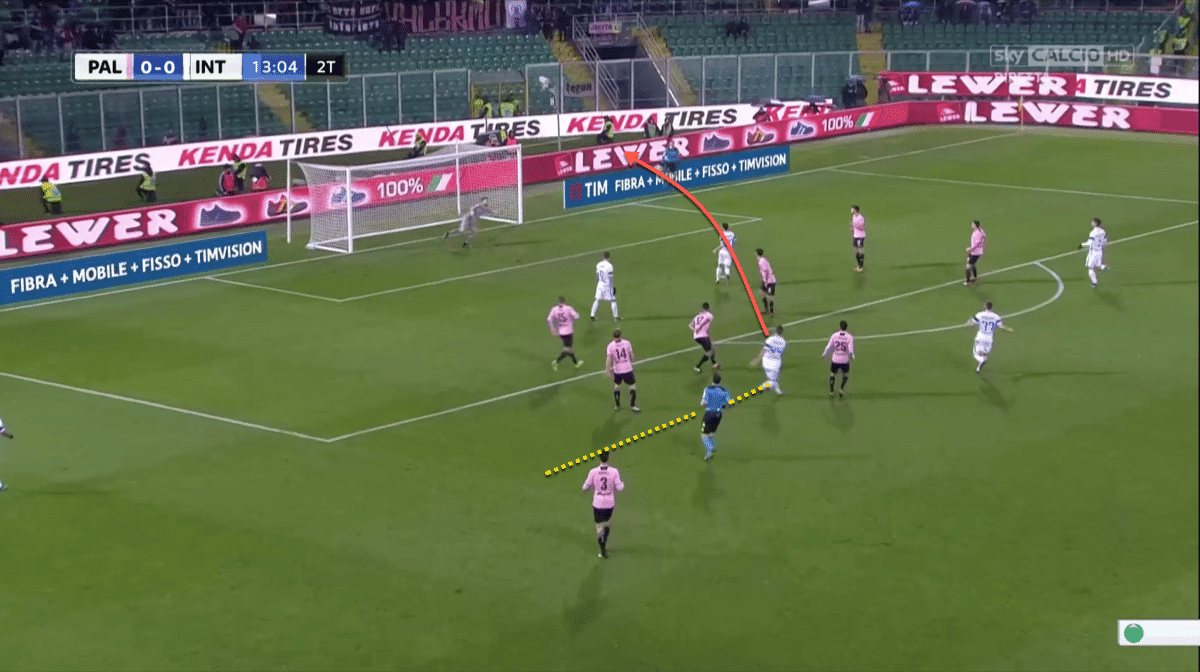 Again, he ignores all of these options in favour of cutting inside and taking a shot from 25 yards. Once more, he doesn't trouble the goalkeeper.

Another slight caveat to Perišić's potential arrival at Old Trafford is that, predominantly a left winger, he could take game time away from the still-developing Rashford and Martial, who, although natural centre-forwards, found the majority of their minutes on the left flank last term.

But Mourinho, conscious he must improve upon last season's sixth-place finish, wants a player for the here and now. And Perišić, with his versatility, work rate, experience and unique skill set would be a valuable option for the Red Devils.

The fee seems excessive and United are rightly reluctant to fork out so much for a player who, at 28, will have little resale value. But it is clear that Perišić is the man Mourinho wants, and he usually gets what he wants.