When Paul Clement was appointed manager of Swansea City on 3 January, the task was clear: he had to steer the club away from the relegation zone and ensure their Premier League survival for a sixth consecutive season.

Through his working with Carlo Ancelotti at some of Europe’s top sides, including Chelsea, Paris Saint-Germain, Real Madrid and Bayern Munich, as well as a reasonable record as Derby boss last season, Clement arrived with a good reputation. However, with Swansea leaking goals at a disconcerting rate, success was far from guaranteed.

Prior to the announcement that he would succeed Bob Bradley in the Swans’ hotseat, the team had lost four games in a row, conceding an eye-watering 13 goals in the process. They had even let in three goals against Middlesbrough — the Premier League’s lowest-scoring side.

Evidently, Swansea required shoring up defensively, especially considering that, in Clement’s first four league games in charge, they were set to play three of the league’s top scoring outfits in Arsenal, Liverpool and Manchester City. Despite a tricky run of fixtures, the Welsh club have picked up six points from a possible 12, beating Liverpool at Anfield and running City close at the Etihad Stadium. 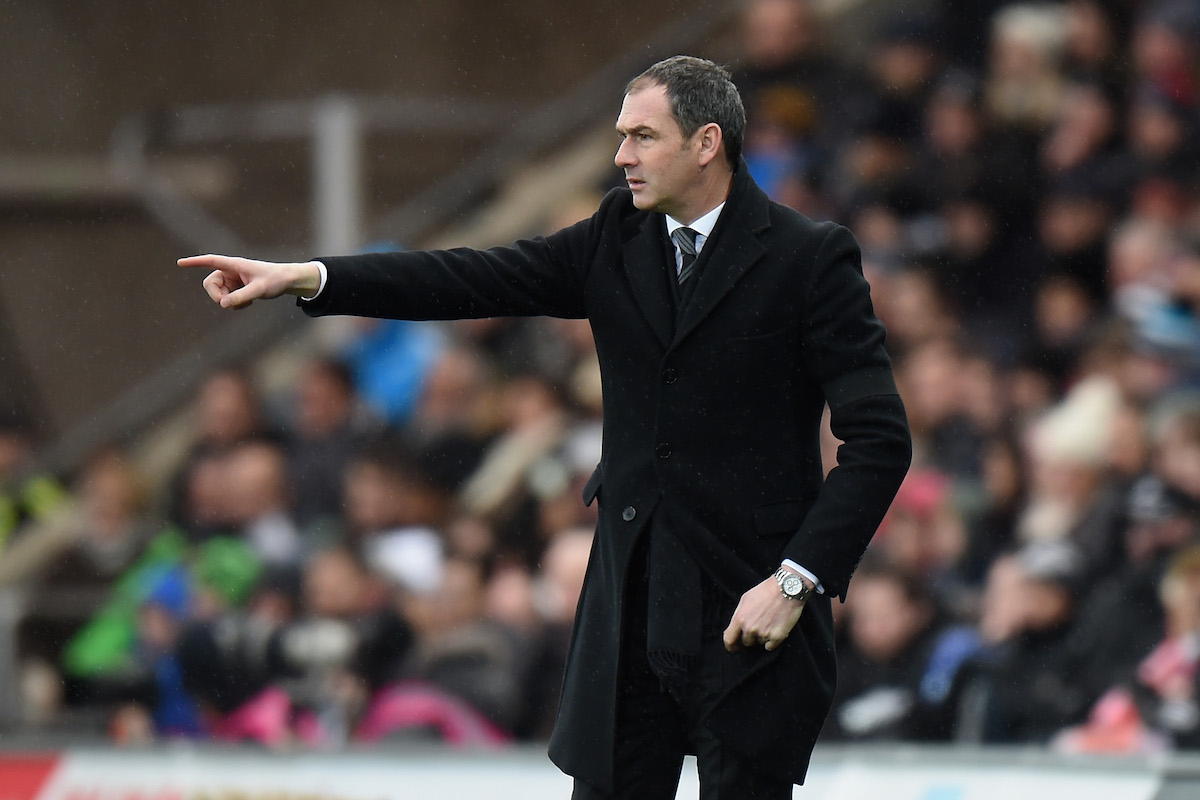 Performances and results have undoubtedly improved since Clement came in, and this is mainly down to a number of important tactical changes made by the new man in charge.

Under Bradley’s auspices it was difficult to predict exactly who would line up and where for Swansea. The formation changed often and so too did the personnel — Bradley fielded a total of six different back four combinations during his 11 games at the helm. This no doubt had a knock-on effect on the team’s level of defensive organisation, which perhaps explains why they conceded so frequently during the American’s tenure.

Since Clement came in, however, Swansea’s selections have been more consistent. Finally, it is possible to guess their starting line-up before a game.

After a brief flirtation with a 4-2-3-1 setup for the 4-0 defeat at home to Arsenal in his first Premier League match, Clement has opted for a 4-3-3 shape. This has entailed a defence featuring goalkeeper Lukasz Fabianski and a back four of Kyle Naughton, Federico Fernandez, Alfie Mawson and Marcus Olsson, a midfield trident of Leroy Fer, Jack Cork and Tom Carroll and a front three of Wayne Routledge and Gylfi Sigurdsson either side of Fernando Llorente.

As outlined above, Swansea’s main weakness this term has been their defence. This is highlighted by the fact that, with 14 fixtures remaining in the campaign, they have already equalled their worst goals conceded tally in the Premier League, with their 54 against matching their record for the 2013-14 season.

One of the reasons behind this poor record was their inconsistent selections at the back, but there was also a clear lack of structure throughout the team in the defensive phase of the game. For example, at home to West Ham United, the first goal conceded in a 4-1 defeat had a lot to do with a disorganised marking scheme that saw gaps open up for Slaven Bilic’s side to exploit.

But, on the basis of Swansea’s most recent displays, Clement looks to have rectified this issue.

Clement has implemented a clear defensive setup in which the team moves in accordance to the opposition’s passing. Without the ball, Sigurdsson and Routledge drop into a five-man midfield line that moves horizontally from left to right depending on where the opposition move the ball. The only occasions on which the line and its movements are broken are when Carroll or Fer move up to press the opposition ball-player in their zone.

The three images below, taken from Swansea’s win over Liverpool, illustrate the defensive setup and movements implemented by Clement.

Clement has generally set Swansea up to defend in a deep block with a narrow 4-5-1 shape. The intention behind this defensive shape is to reduce the space available for the opposition to play into centrally, forcing them wide and into less dangerous areas of the field.

As discussed above, the team’s movements are in accordance with the opposition’s movement of the ball. This helps to prevent large gaps opening up in Swansea’s defensive structure, as their players are no longer instructed simply to follow their opposite man in individual battles, but to defend collectively as one.

Routledge and Sigurdsson have important roles within the team in this respect as, having been part of the attacking three with Llorente, they must get back into their defensive positons on the midfield line. These positions are in the inside channels, from where they can block forward passes from opposition defenders while retaining access to pressure the opposition full-backs when necessary, as depicted below.

When the opposition do move the ball out to the flanks, Routledge and Sigurdsson are charged with pressing the ball receiver. And, with the aforementioned collective movement of Swansea’s defensive shape, they will then be supported in this action by Carrol or Fer and Cork, who cover behind them. An example of this is shown below.

Llorente has had a more active role in Swansea’s defensive phase in recent fixtures, as Clement has tasked the Spanish centre-forward with monitoring and covering the opposition’s ball-playing midfielder. This was evidenced against both Liverpool and Southampton, with Llorente taking up his defensive role against Jordan Henderson and Oriol Romeu respectively.

The aim of Llorente’s defensive role is to disrupt the opposition’s build-up play by removing their first receiver as a possible passing outlet for the centre-backs to use. By taking away Henderson and Romeu, he forced Liverpool and Southampton to seek alternative options when building possession from the back, and often forced them wider in the process.

Much of the emphasis on Clement’s changes regards what he has brought to Swansea from a defensive standpoint, though this is necessary considering his side have forgone the majority of possession in every single one of his first four Premier League games in charge.

Consequently, any changes the new manager has made in the team’s attacking play have been less evident, although one alteration is clear: he is focusing more on direct play with Llorente as an outlet for long balls. This is shown statistically by the fact that, while on average Swansea have played 67 long balls per game this season, they have averaged 79 in their last two fixtures.

It remains unclear if Clement’s approach will change in games the Swans are expected to win, though one thing is certain: his Swansea will be much harder to break down.

IF YOU MISSED EPISODE 10 OF FOOTBALL WHISPERS TV, CATCH UP NOW!