Celtic have confirmed their third signing of the summer after Olivier Ntcham swapped Manchester for Glasgow.

The 21-year-old impressed while on a two-year loan with Genoa and his form in Italy convinced Brendan Rodgers to sanction a deal worth in the region of £4.5million. Ntcham signed a four-year deal with the club

“I'm most looking forward to the derby and playing in the Champions League,” Ntcham told Celtic's website.

“I remember them beating Barcelona five years ago in the group stages. Not every club gets to play in this competition so I'm happy to have the chance to play there with Celtic.

“Celtic is a fresh challenge for me. While Genoa are a good team, I knew they wouldn't win Serie A as they were not a top team like Juventus, but I know Celtic are a big team in Scotland.”

The Frenchman joined City in 2012 from the famous Le Havre academy for a fee reported to be worth €1million. He was promoted to the first-team in 2015 and penned a new five-year deal before being sent out on loan in a quest for regular minutes.

Ntcham was pictured in Glasgow on Saturday ahead of having a medical with the club and the deal was completed in a swift manner.

The French playmaker could be viewed as a potential replacement for contract rebel Stuart Armstrong. The 25-year-old was a key man for Rodgers last season and has been transformed under the former Liverpool manager.

However, with just 12 months remaining on his current deal, his future is up in the air. The Bhoys have offered what they feel to be a fair deal but Armstrong is yet to commit his long-term future to the club amid interest from Brighton & Hove Albion and Southampton.

While losing the 15-goal Armstrong would be a blow, Ntcham has the ability to replace him and then some. Here, we take a detailed look at what the French under-21 international will bring to the Celtic team.

His former coach Andrea Mandorlini is full of praise for the youngster. He took charge of the Italian club for part of last season and yesterday backed Ntcham to enjoy a top-level career in the game.

“Olivier is only a young boy – he has incredible potential and he’ll be a star,” said Mandorlini. “He’s had to work hard and there’s more to come from him.

“He is very, very comfortable on the ball. He scored an important goal for me last season against Bologna in injury time when he came on as a substitute. He works hard and he is a happy person – he’s good to be around.

“I feel that when he plays well, the whole team plays well. Above all, he has shown a willingness to listen and to improve. He has a big future if he keeps progressing.”

Celtic could have a worldie on their hands.

Previously he's been compared to former teammate Yaya Touré and compatriot Paul Pogba. On the surface these comparisons could comes across as lazy; but the trio do share some traits.

All three are powerful and have quite the presence at the heart of the midfield. All have superb technique, the vision and the ability to execute defence-splitting passes.

Ntcham drives at the opposition like the Ivory Coast legend but his swagger comes right out of the Pogba playbook. Due to lack of stats covering the Scottish Premier League it's difficult to compare the young player to what the Hoops currently have at their disposal.

The Frenchman, though, was averaging 0.5 key passes per 90 minutes playing in a struggling Genoa side.

With the likes of Scott Sinclair, Moussa Dembélé and potentially Charly Musonda ahead of him, he could well be pulling the strings next season and that number could more than double.

He completed 0.9 dribbles per game too which shows he's more than capable of carrying the ball and beating the opposition in central areas. It's his vision, his technique, the abundance of intelligence he showcases and the way he appears to play perpetually on the half-turn which makes you think Celtic could be onto a winner. 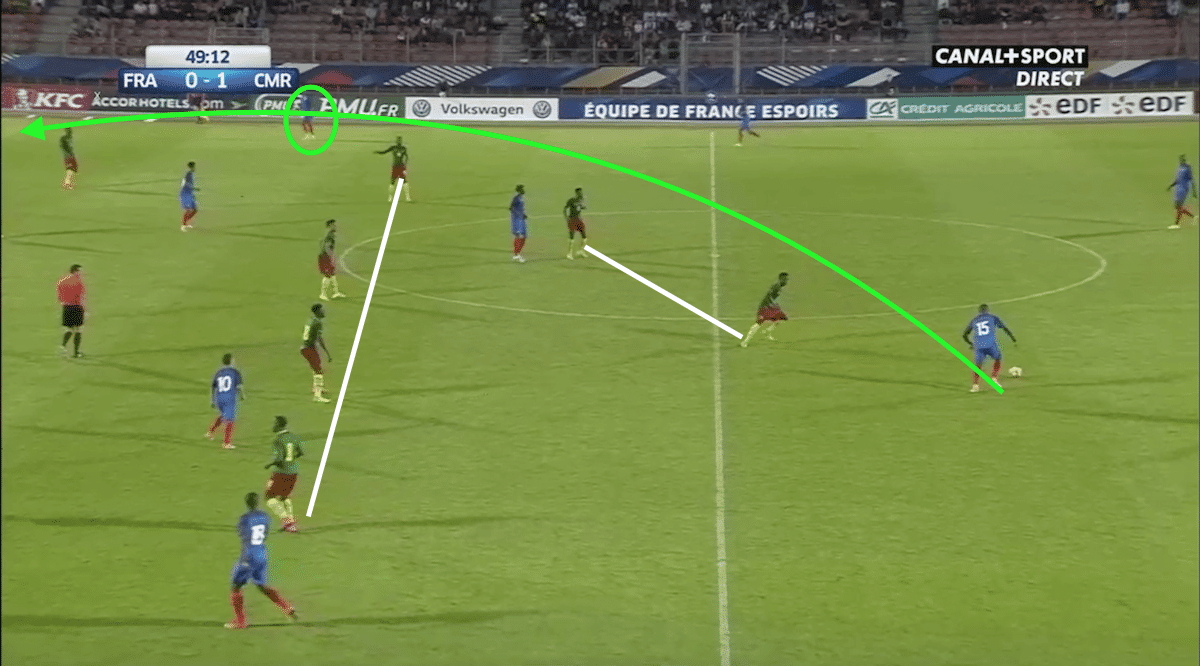 In the picture above you get to see why Ntcham has the ability to dictate play from deep areas. He picks the ball up in midfield and is immediately pressed by a player from the away side.

Cameroon have a line of four and two ahead effectively cutting out the ability to play the ball between the lines. There's a simple pass on to the right sided centre-back but Ntcham looks to get France onto the attack.

He plays a perfectly weighted pass into the space behind the left-back. Cameroon go from having nine outfield players behind the ball to having just the three. The play progresses and France win a corner.

Ntcham makes it look so simple but it's far from it. 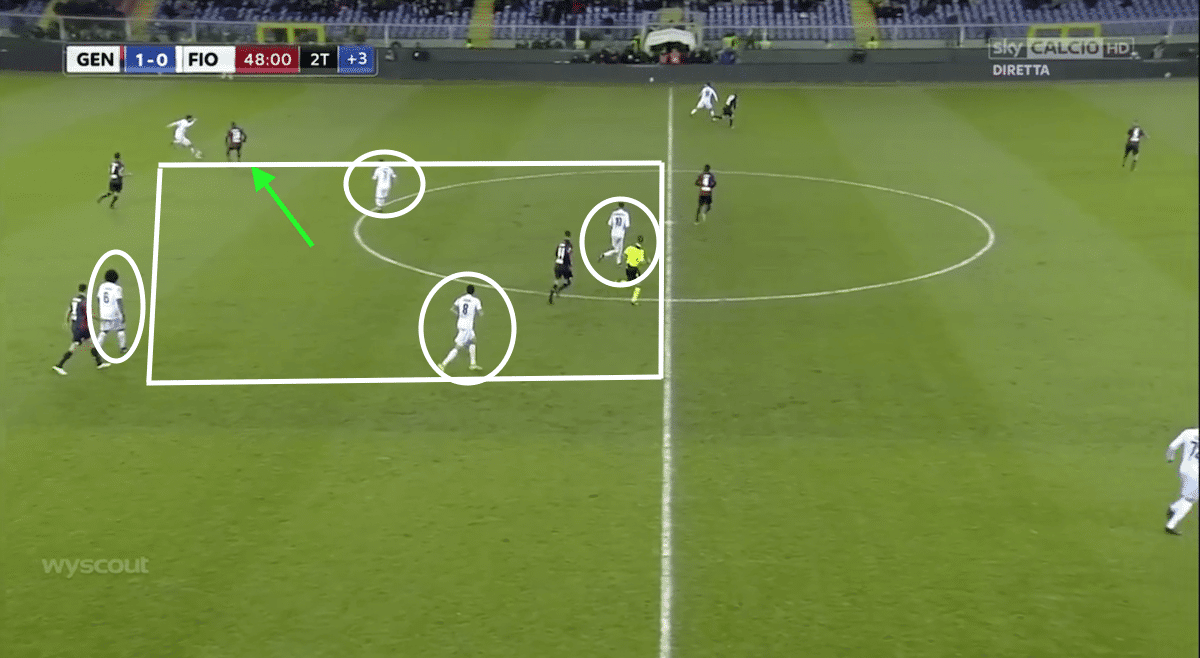 This time you see his intelligence and the defensive side of his game. He presses the man in possession but doesn't overcommit. Many in this scenario are sold by the dummy and it allows the Fiorentina man to turn back inside and play the ball centrally.

Instead, Ntcham holds his position and almost forces him to play the ball down the left which would more than likely see a turnover in possession. There's nothing half-hearted about this attempt to pin the away side back. He's blocking off an easy pass into the central areas which effectively nullifies the four players circled.

The man in white tries to play it around Ntcham but loses the ball as Genoa spring a counter attack. 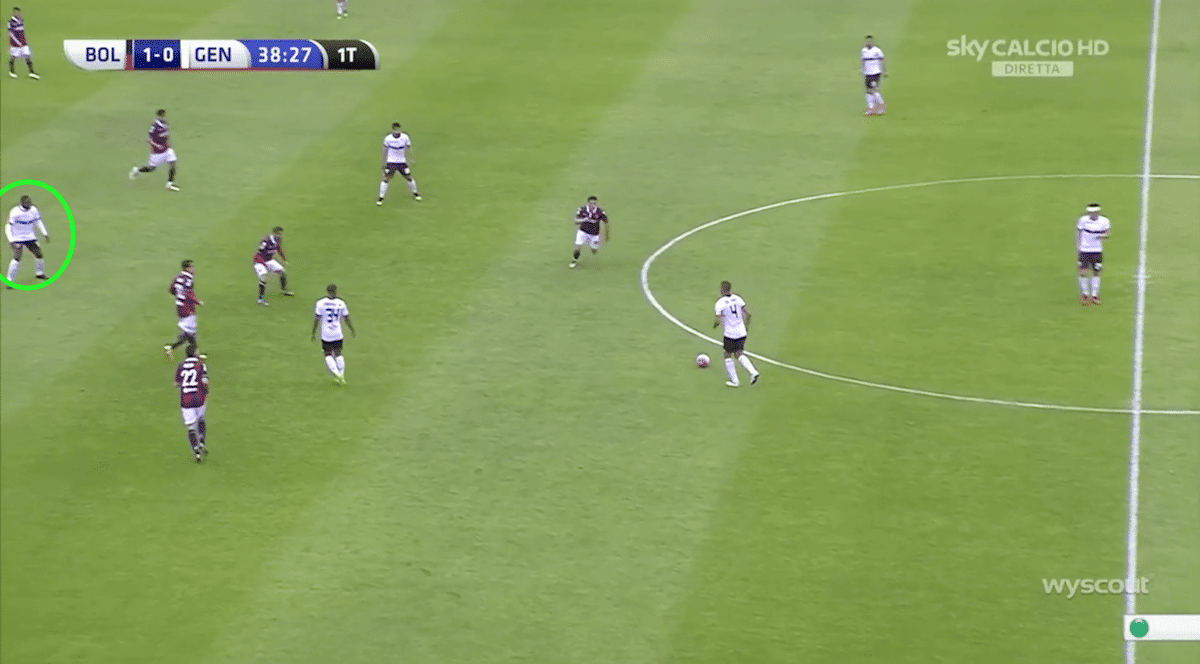 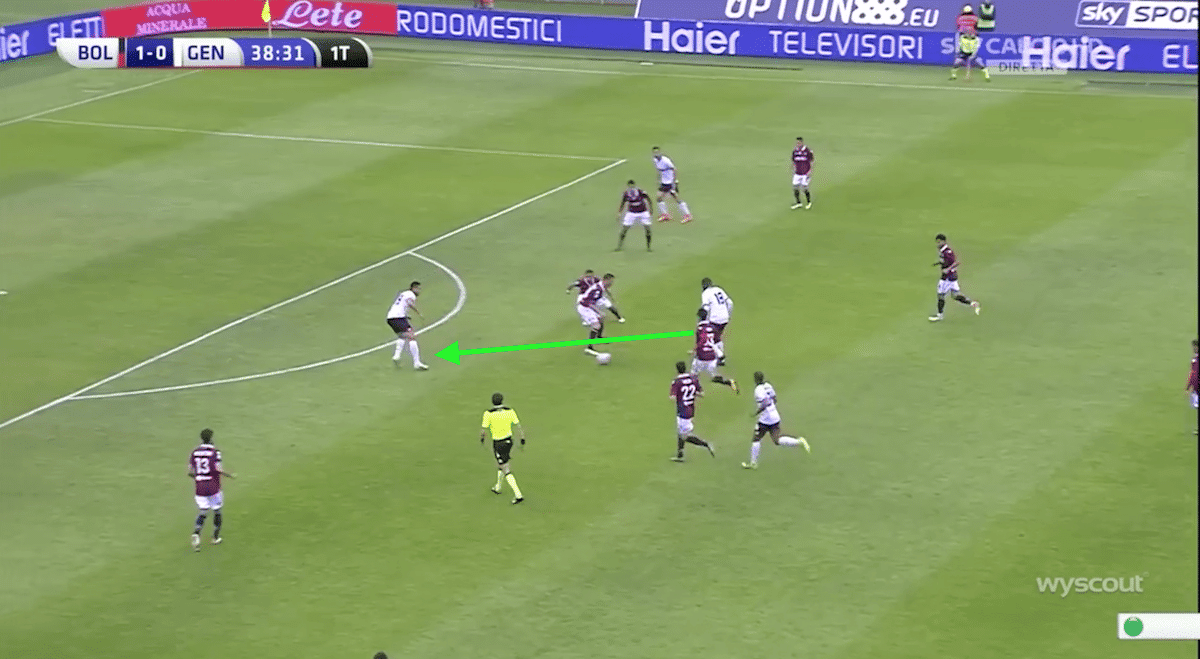 In the two screenshots above you see Ntcham's intelligence to find space and then his ability on the ball to create something out of nothing.

In the initial picture he's cleverly dropped off behind the Bologna midfield. He's not square on and instead is angled, meaning when he takes the ball on it's one seamless move from receiving it and turning into the space around him.

The fewer the touches he takes the less chance the opposition have of dispossessing him.

He then drives at the defence, engages a number of players – there are four around him – before threading a pass through. The chance isn't taken but it takes nothing away from what went before it. 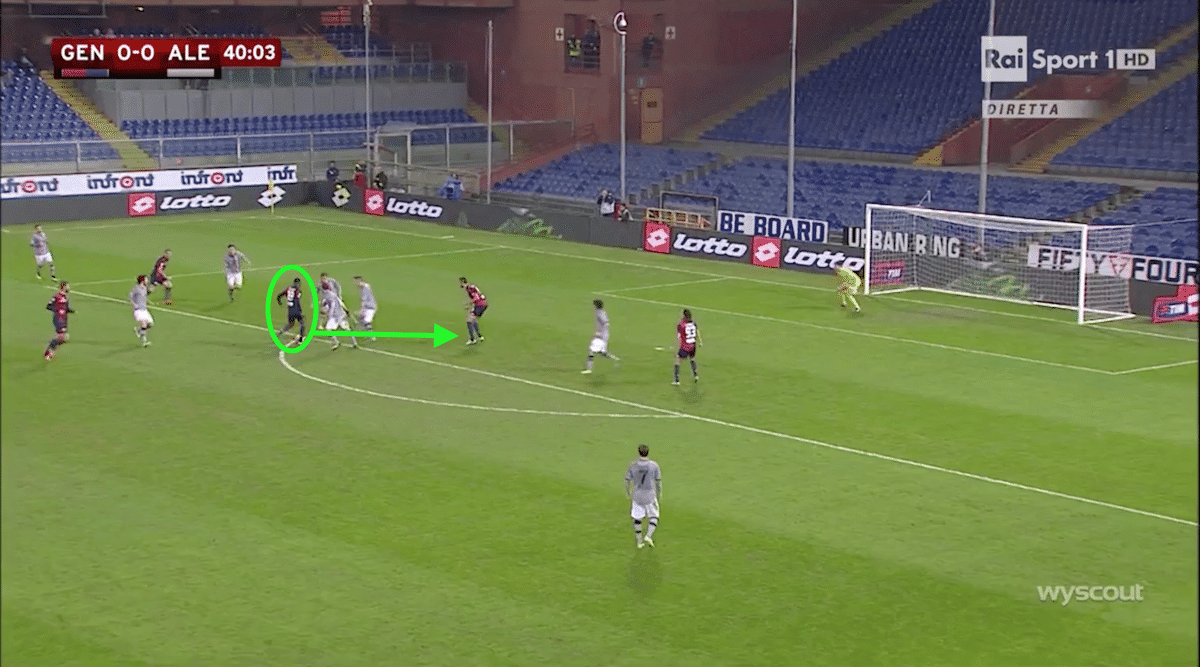 His quick feet create an opportunity in the picture above. He finds himself in space on the edge of the penalty area but is quickly shut down by three players. Undeterred though Ntcham isn't rushed or flustered but instead gets the ball onto his left foot and slide an incisive ball through to the man unmarked in the middle.

Again, the chance is wasted but he did his part. He finished the season with just one assist but it wasn't through lack of effort on his part.

Ntcham's team-mates just weren't clinical when he presented them with chances. It was the story if Pogba's season too.

The 21-year-old's presence and his eye for a pass could have a positive impact on their performances in the Champions League.

Celtic could be signing yet another gem with the potential to turn a huge profit in a season or two. He has everything in his locker to chew up the midfielders in the Scottish Premier League and dominate like no other.